Adorable boy, 2, with spina bifida is thriving thanks to emergency surgery

A boy who had spinal surgery at just eight hours old is thriving.

Leo, now two, was born with spina bifida, a birth defect in which the backbone and spinal canal do not close fully.

Doctors suggested an abortion to 26-year-old Shaylise Harris and her husband Alex, 28, but they wouldn’t.

The Utah couple had been struggling to conceive for two years, even turning to a hormonal drug to boost their chances. They couldn’t bear to let their baby go.

It meant that, as soon as Leo was born, he was being prepared for the operating theater, and a lengthy emergency surgery to give him the best chances.

Now, although many people express pity for Leo’s condition, Shaylise and Alex say he is a bundle of joy and energy, moving around more than they expected, and they hope others see the beauty in his difference.

Leo, like most two-year-olds, is walking about and playing, thanks to a wheelie support and a surgery hours into his life that helped protect him from damage to his spinal cord 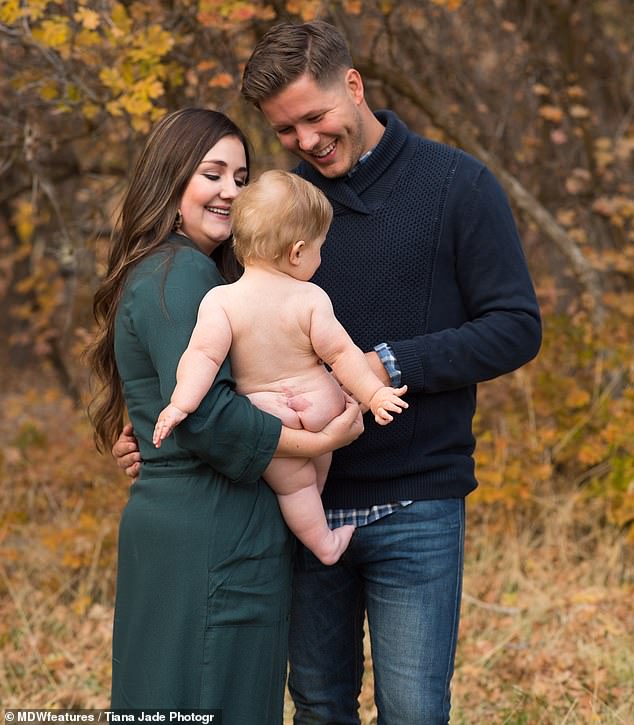 Shaylise and Alex Harris, pictured with Leo, said he is their bundle of joy after they struggled for two years to conceive

‘Leo has accomplished so much and will continue to do so,’ Shaylise said.

‘We want everyone to see the positivity in spina bifida and all that can be accomplished.’

‘It took us longer than we planned,’ Shaylise said.

‘We ended up going through all of the fertility tests which were emotionally exhausting.’

Ultimately, they found out that Shaylise’s hormone levels were ‘off’, and she was prescribed letrozole, a drug that can be used to treat ovarian conditions and unexplained infertility, as well as some forms of breast cancer. 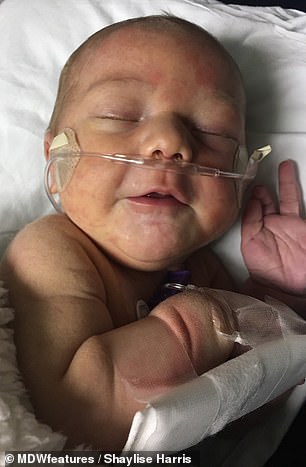 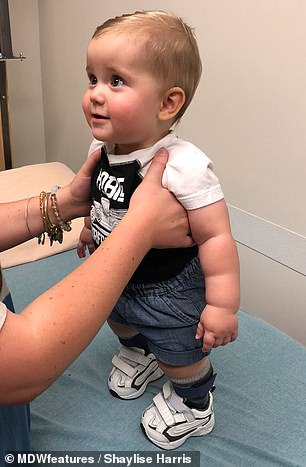 Leo (pictured, left, around the time of his surgery and, right, more recently) is thriving 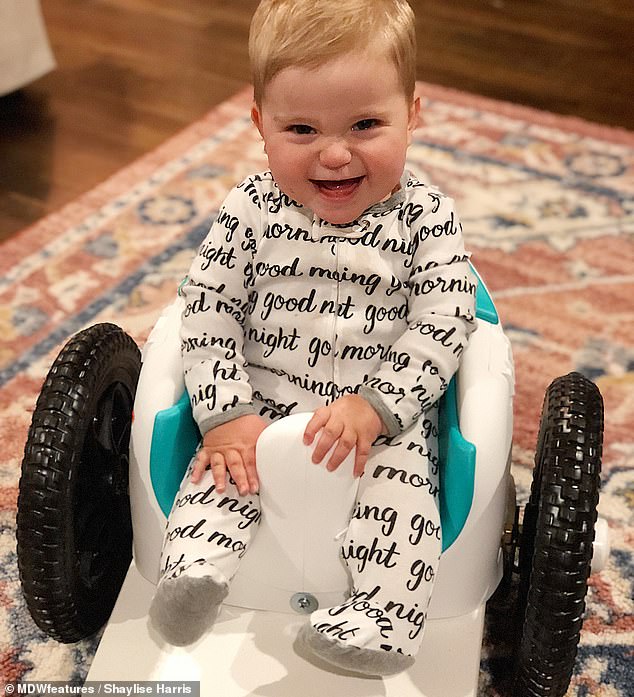 The early diagnosis was good for the Harrises in many ways. They were able to prepare and experience their emotions so they were happy for him when he arrived

Within three months, she was pregnant.

‘We were thrilled when we finally got the positive pregnancy test,’ she said.

‘We had already started buying baby gear before the positive test so you could say we were eager to be parents.’

Leo was diagnosed with spina bifida at 20 weeks’ gestation.

The early diagnosis was good for the Harrises in many ways. They were able to prepare and experience their emotions.

‘By the time he was born, we were just excited about our new baby,’ Shaylise said.

‘Of course, we were still worried about his surgery, but we had already been through all of the hard worries and strong emotions through the pregnancy.’

About 10 percent of babies born with spina bifida die within 24 hours. 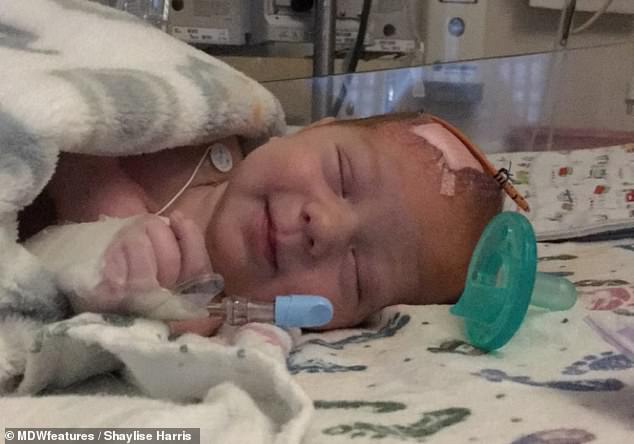 ‘By the time he was born, we were just excited about our new baby,’ Shaylise said 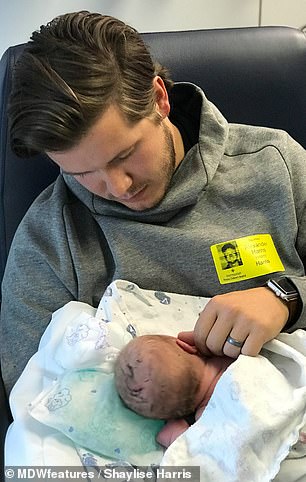 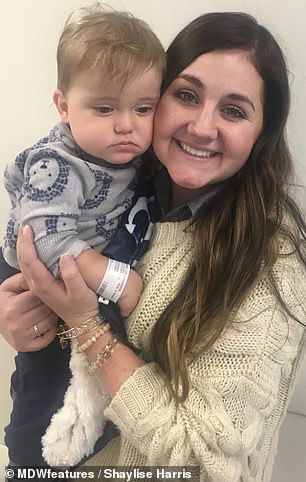 The day they got the diagnosis was tough, full of ‘a lot of fear and worry’. But, the day Leo was born ‘was full of so much hope and joy. He was born happy’. Pictured: Alex (left) with newborn Leo, and Shaylise (right) with two-year-old Leo

The survivors often face a life marred by paralysis, weak legs, poor bowel control, and sometimes a hernia of the brain stem.

Surgery can be performed immediately after birth to cover the exposed spinal cord with skin in a bid to protect them from damage and curb the severity of their disability.

The day they got the diagnosis was tough, full of ‘a lot of fear and worry’. But, the day Leo was born ‘was full of so much hope and joy. He was born happy.’

‘His first smile was when he was an hour old. He seemed to want to tell us that everything would be okay and that his surgery would be okay.’

Leo’s spinal surgery lasted four-and-a-half hours, and Shaylise and Alex couldn’t see him for another hour as doctors monitored his recovery.

Reading and talking to other families who had kids with spina bifida has helped them through their own journey.

‘After getting Leo’s diagnosis, the thing that helped us most was talking to other families who had kids with spina bifida,’ Shaylise said.

‘We decided that we wanted to share our experience so that others who were getting a new diagnosis could see what it was like. 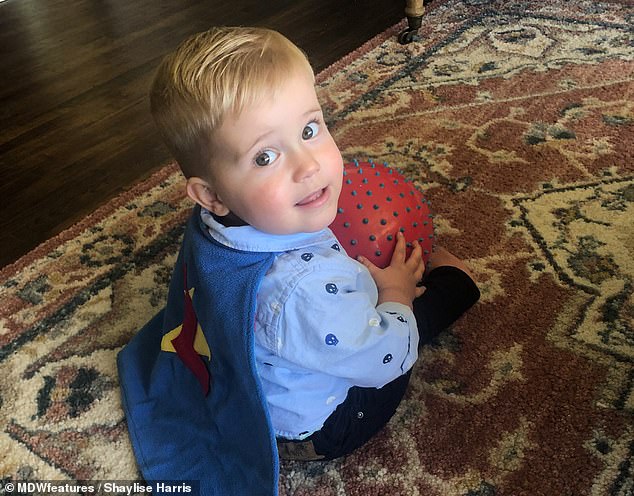 The only question they get that really makes Shaylise’s heart break is when people ask, ‘what’s wrong with him?’ ‘There’s nothing wrong with him, he came to earth exactly as he was supposed to,’ Shaylise says

‘We also have a really great support system of friends and family cheering Leo on and praying for him and our family.

‘A lot of times people will say, “oh I’m so sorry he has spina bifida”, but I don’t feel that people need to apologize for his condition.

‘He doesn’t let it stop him. I love it when people ask questions. If they see him in his wheelchair, I love it when they come ask me about his chair and comment on what a happy child he is.’

The only question they get that really makes Shaylise’s heart break is when people ask, ‘what’s wrong with him?’

‘There’s nothing wrong with him, he came to earth exactly as he was supposed to,’ Shaylise says.

I want other families to know that even though the days can be hard, they are all worth it

‘I feel very blessed to be Leo’s mother. I get comments all the time about what a special personality he has and how happy he is.

‘I feel incredibly blessed that I have been entrusted with the responsibility to be his mom. The spina bifida community is a special place full of the kindest people and I’m grateful to be able to be part of it.’

They try not to worry about Leo’s future and try to take things one day at a time.

‘I want other families to know that even though the days can be hard, they are all worth it. Leo exudes love and happiness and I can’t imagine this world without him.

‘When people hear spina bifida or get the diagnosis, they are immediately told all of the challenges they will face and everything that makes them different.

‘We choose to focus on Leo’s accomplishments rather than his challenges.’

Spina bifida is a relatively common birth defect, affecting about 1,500 to 2,000 babies born in the US each year.

During development these structures – along with the brain – all arise out of something called a neural tube, a precursor the entire central nervous system as well as the protective tissues that form around them.

Typically, this tube forms and closes by the 28th week of pregnancy.

But in babies with spina bifida, it doesn’t close properly, for reasons that are not entirely clear yet to scientists.

Instead, these babies are left with a gap in the vertebrae, through which part of the spinal cord may slip, depending the severity.

People with the mildest form of spina bifida – the occulta form – may not even know they have it.

The gap between their vertebrae is so small that the spinal cord stays in place and they are unlikely to experience any kind of neurological or motor symptoms.

In the next more severe form of the condition, called meningocele, the the protective fluid and membranes around the spinal cord are pulled through a gap into a fluid filled sack on the exterior of the baby’s back.

There’s no actual nervous tissue out of place, so there may be complications, but they’re less likely to be life altering.

But in open spina bifida, or myelomeningocele, there are larger or multiple openings along the spine.

Both the membranes and spinal nerves and tissues they’re meant to protect are pulled outside the baby at birth.

The symptoms vary wildly based on where and how severe these openings are.

Some children may develop  little more than skin problems, while other with severe forms may be unable to walk or move properly, or develop infections like meningitis that can leave them with permanent brain damage.

Making sure women get plenty of folic acid in pregnancy can help ensure the spinal cord develops properly.

After birth, surgery to repair these openings may be performed and, in more recent years, some surgeons have begun repairing spina bifida in the womb.