A ‘miracle’ baby sent BBC Breakfast presenters into hysterics this morning after repeatedly breaking wind live-on-air as they tried to chat with her cancer-surviving parents.

Naga Munchetty and Charlie Stayt were attempting to tell the heart-warming story of James and Bethany Jefferson-Loveday, who had joined them on the famous red sofa with their newborn Heidi.

The happy and healthy girl was born despite her father having been diagnosed with Hodgkin’s lymphoma before her conception, when doctors advised his fertility could be affected by chemotherapy.

Meanwhile her mother Bethany found out she had Non-Hodgkin’s lymphoma at 21 weeks into her pregnancy – but both parents are now in remission requiring no further treatment.

Naga Munchetty and Charlie Stayt were attempting to tell the heart-warming story of James and Bethany Jefferson-Loveday, who had joined them on the famous red sofa with their newborn Heidi 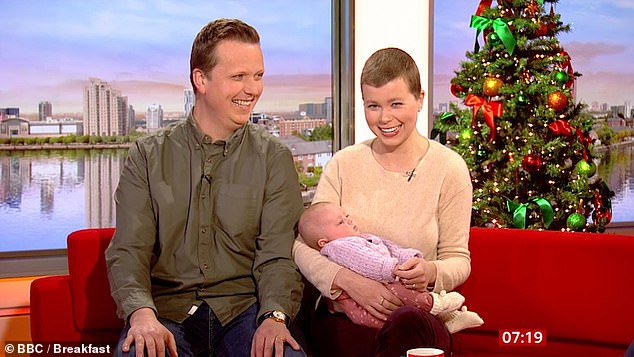 The happy and healthy girl was born despite her father having been diagnosed with Hodgkin’s lymphoma before her conception , when doctors advised his fertility could be affected by chemotherapy.

But just before Munchetty and Stayt were set to tell millions of viewers about the ‘very emotional’ story, Heidi woke up from a nap and rather loudly released some gas.

Munchetty chuckled: ‘Did she just parp? She just parped! Does she usually wake up like that?’

‘I did hear that,’ Stayt added: ‘It’s a welcome to BBC Breakfast. That’s what that was!’

Continuing to giggle, Munchetty said: ‘I’m telling a very emotional story here, please, Heidi – let me get on with it!’

But the tot was not done as she released another trump later on in the segment.

The sofa erupted with giggles once more as Stayt said: ‘It’s perfect, it’s going to be a punctuation throughout this discussion!’ 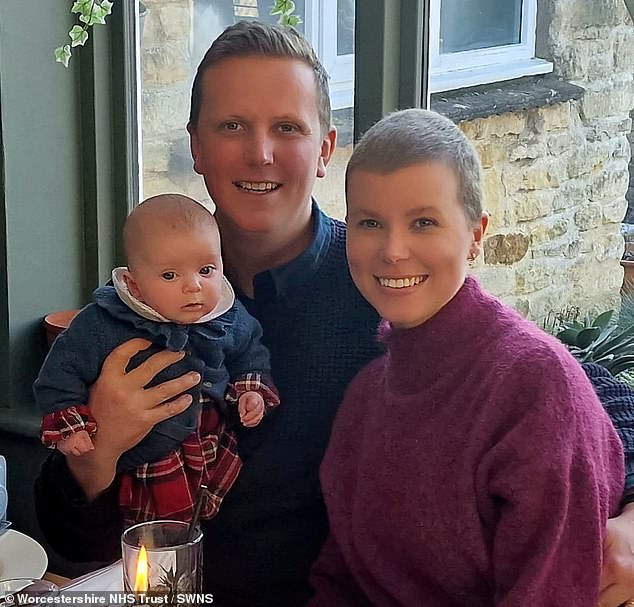 James and Bethany Jefferson-Loveday, from Evesham in Worcestershire, are celebrating the birth of a healthy baby girl despite both undergoing chemotherapy during pregnancy

Munchetty added: ‘We’re talking about cancer and laughing as well.’

Viewers took to social media to praise the segment and branded the moment ‘heartwarming’.

One wrote on Twitter:  ‘So lovely to turn on the news and listen to a good news story from cancer survivors James and Bethany and watch the most gorgeous smiley miracle baby Heidi steal the show. Such a heartwarming few mins.’

Another declared: ‘A baby has just farted on BBC Breakfast’, as one replied: ‘That’s what babies do!’

One said: ‘They’ve had such a though time. She’s beautiful, I hope all goes well for them now.’

James and Bethany, from Evesham in Worcestershire, were left devastated after they were each diagnosed with lymphoma just a few months apart.

James, 33, was told he had Hodgkin lymphoma – a cancer that develops in vessels and glands throughout the body – in December last year.

The diagnosis led the couple to try for a baby before James’ treatment began, in the knowledge that conceiving may be more difficult after chemotherapy.

The pair were ‘over the moon’ when Bethany, 30, found out she was pregnant the following month in January.

But their joy turned to further despair when Bethany was diagnosed with a high grade of Non-Hodgkin lymphoma at 21 weeks pregnant.

Doctors said the chances of having that type of cancer while pregnant was ‘exceptionally rare’ and Bethany underwent chemotherapy because without it she wouldn’t have survived.

She was also given the shattering news her baby was unlikely to survive the full pregnancy – all while her husband was also undergoing treatment. 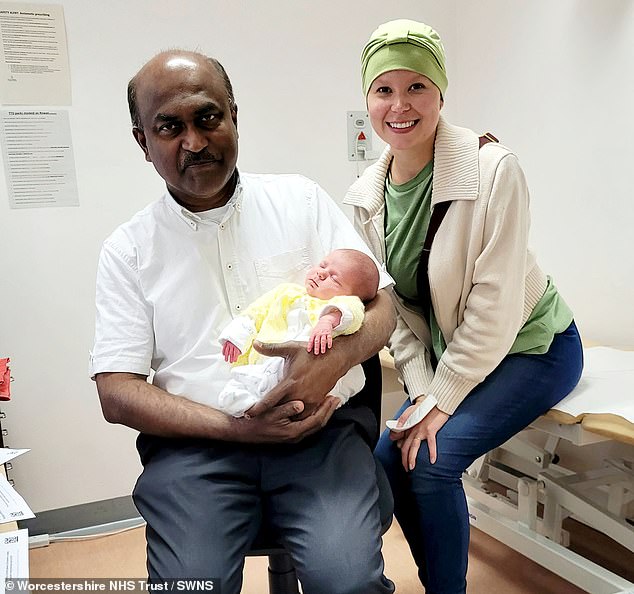 However, against all the odds their daughter Heidi was safely delivered by Caesarean section at Worcestershire Royal Hospital after Samantha finished her chemo.

Both James and Bethany are now in remission, no longer require treatment and are looking forward to their first Christmas together as a family.

Bethany said: ‘James and I both agree that Heidi’s birthday was the best day of our lives. It is the happiest I have ever felt.’

Bethany’s symptoms began in her first trimester, whilst her husband was still undergoing chemotherapy treatment for his lymphoma.

After weeks of minor symptoms progressed, Bethany contacted her GP but at this stage it was believed her symptoms were pregnancy related.

Bethany said: ‘I started to get a severe pressure build up in my head and had the worst headaches I’ve ever experienced. 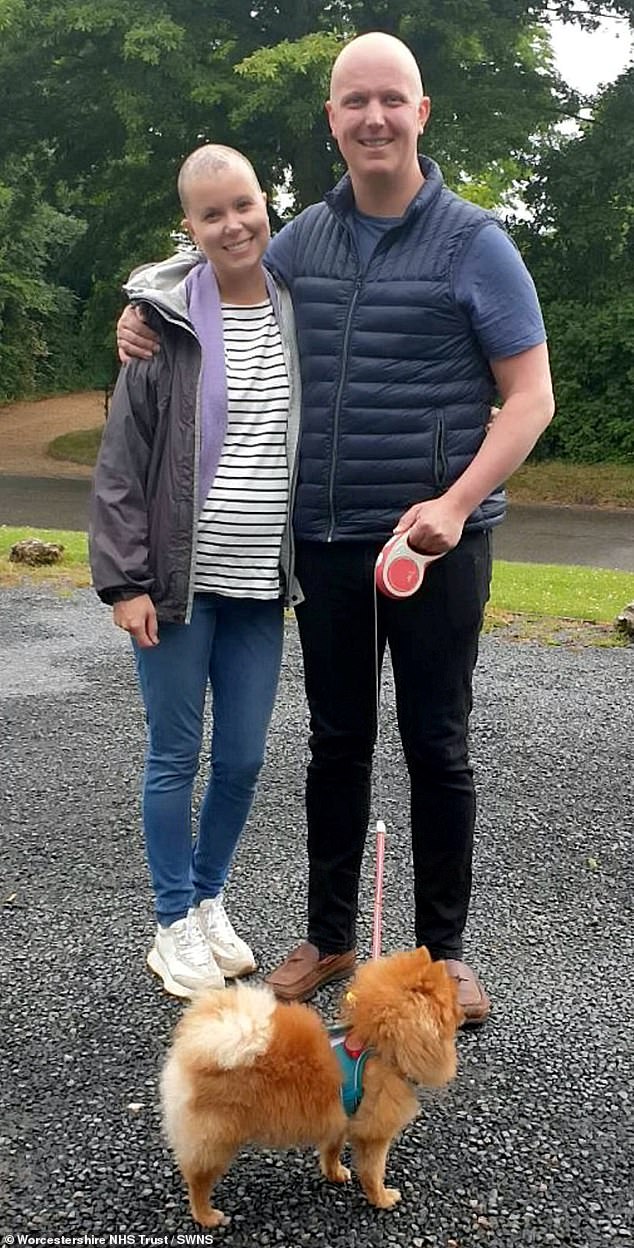 Bethany, 30, and James, 33, (pictured during chemotheraphy) were each diagnosed with lymphoma just a few months apart

‘I became breathless, unable to do my usual activities, and a hard lump appeared on my collarbone.

What is Non-Hodgkin’s Lymphoma?

Non-Hodgkin’s lymphoma is a type of cancer that begins in your lymphatic system, which is part of the body’s germ-fighting immune system.

‘But despite all of this, I was in denial that anything was wrong. I assumed that my symptoms were pregnancy related and that the lump must have been a cyst.

‘Eventually my mother persuaded me to go to A&E and I was then referred for an MRI, CT and biopsy.

‘I will never forget the moment I was given my diagnosis.

‘I remember questioning how this was possible as my husband was undergoing treatment for Hodgkin lymphoma at the time.’

Bethany then had what she calls ‘the most difficult conversation of my life’ with a Consultant Obstetrician at the hospital about the options for her pregnancy.

She added: ‘My Obstetrician had to explain all the possible options for the pregnancy to me including termination.

‘I came out of the appointment feeling like 80 per cent of my options were negative and that I had only the tiniest glimmer of hope that the pregnancy would reach a successful outcome.’

With both husband and wife needing chemotherapy so close together, the couple said they shared a unique understanding of the experience of their treatment.

Bethany described: ‘I felt total despair at the thought of having chemotherapy and losing my hair but James was such a great support to me, he completely understood what I was going through.

‘He shaved my head for me when my hair started to fall out, just as I had done for him earlier in the year.

‘The nurses were so kind and we used to have a chat whilst they were giving me my chemo which took my mind off it.