Adorable photographs show a polar bear family snuggling up together to keep warm in the freezing snow.

The mother and two cubs can be seen cuddling each other at Wapusk National Park in Manitoba, Canada.

Climbing on their mother’s back and embracing her, the cute little cubs look thrilled to be frolicking in the blistering cold climate.

Me first! One of the adorable little cubs can be seen clambering onto its mother’s back while the other watches intently at Wapusk National Park in Manitoba, Canada 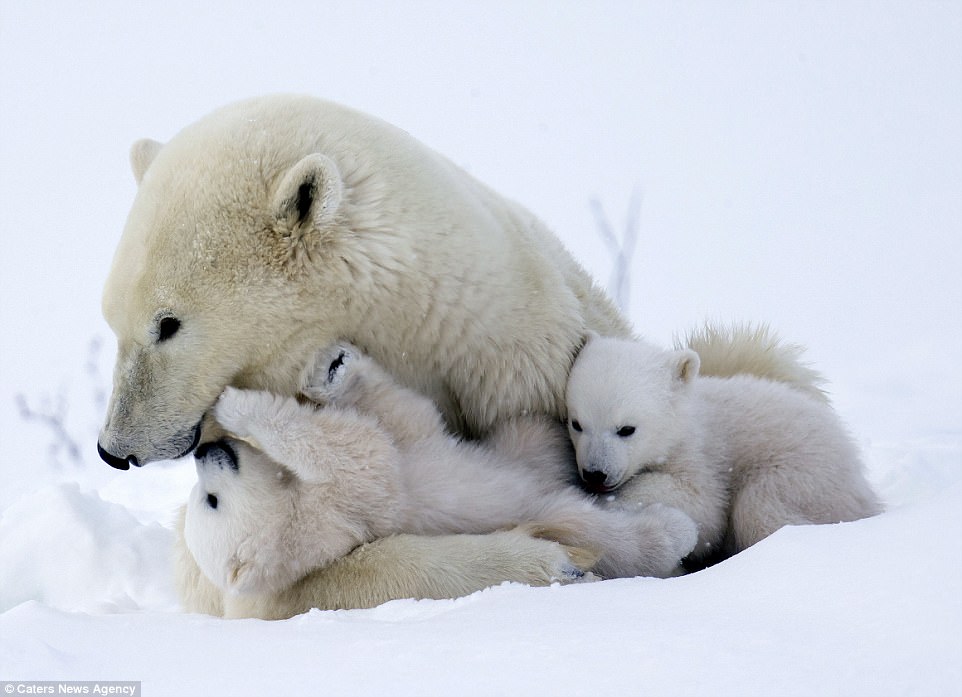 Play time: This mischievous baby polar bear playfully pokes at its mother’s mouth with a tiny paw while lying in her arms 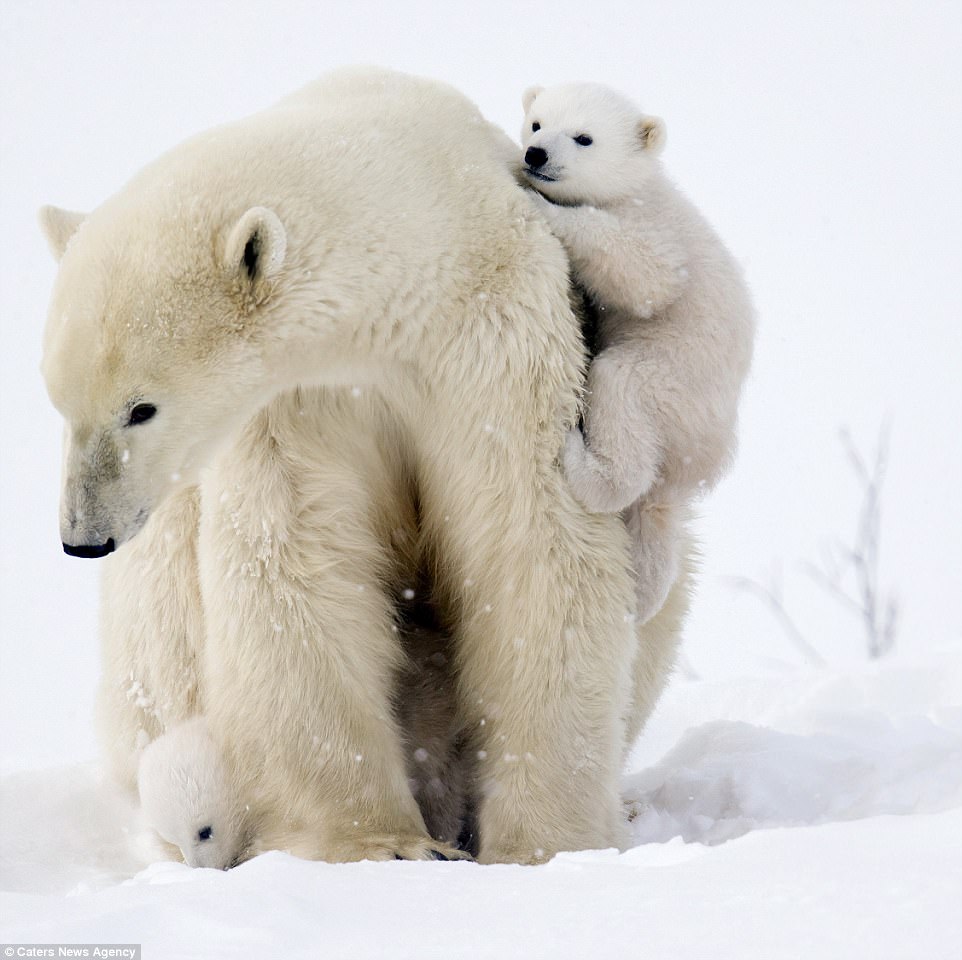 Nearly there! One of the babies can be seen expertly climbing onto its mother’s back in the bitterly cold snow 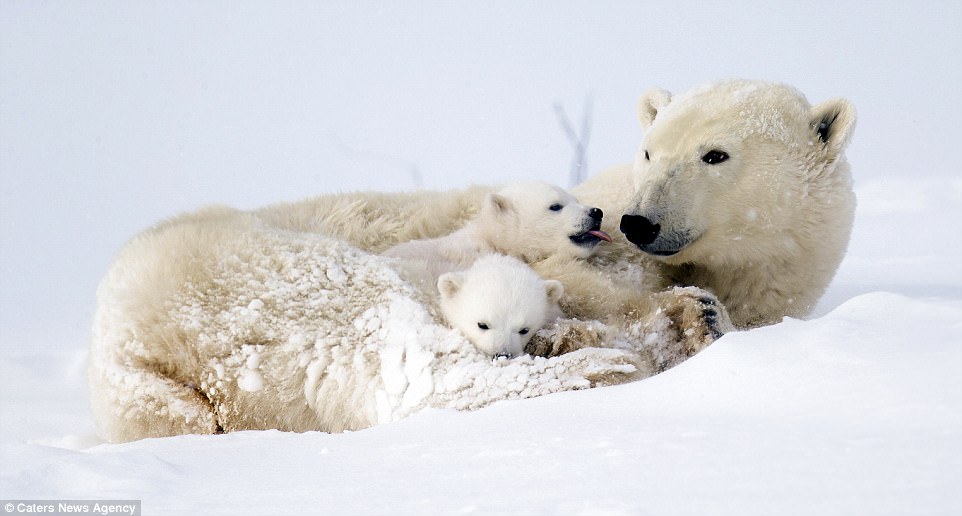 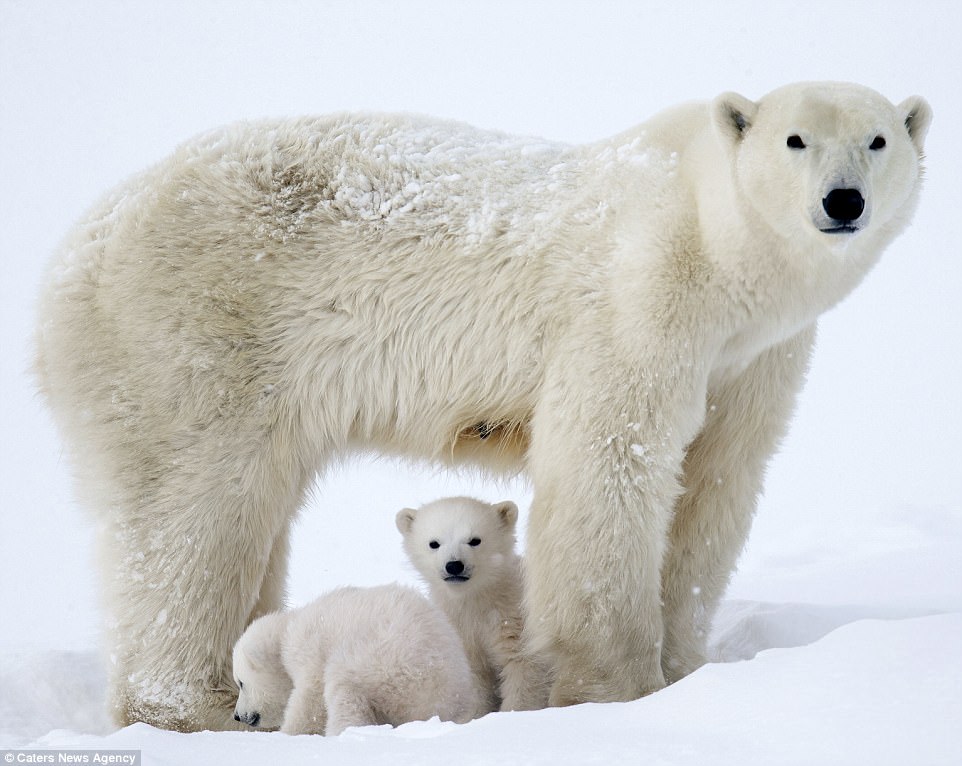 Taking shelter: The baby bears took cover underneath their mother, trying to shelter themselves from the ice cold snow

Wapusk National Park protects one of the largest polar bear maternity denning areas in the world.

The park, which opened in 1996, stretches over an enormous 2,836,000 acres and is within range of the Western Hudson Bay population of about 1,000 polar bears.

In late February, visitors can watch tiny three-month-old bear cubs explore their snowy new world for the first time under the watchful eyes of their mothers. 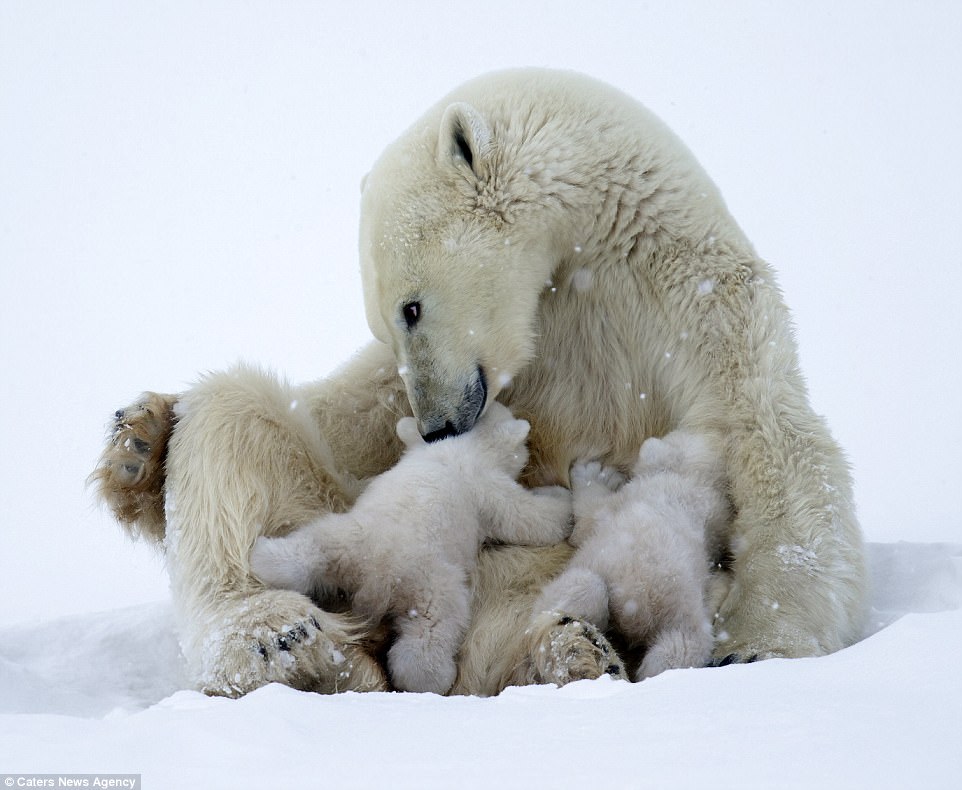 Twins: The little cubs looked almost identical as they sprawled head-first onto their mother’s stomach together 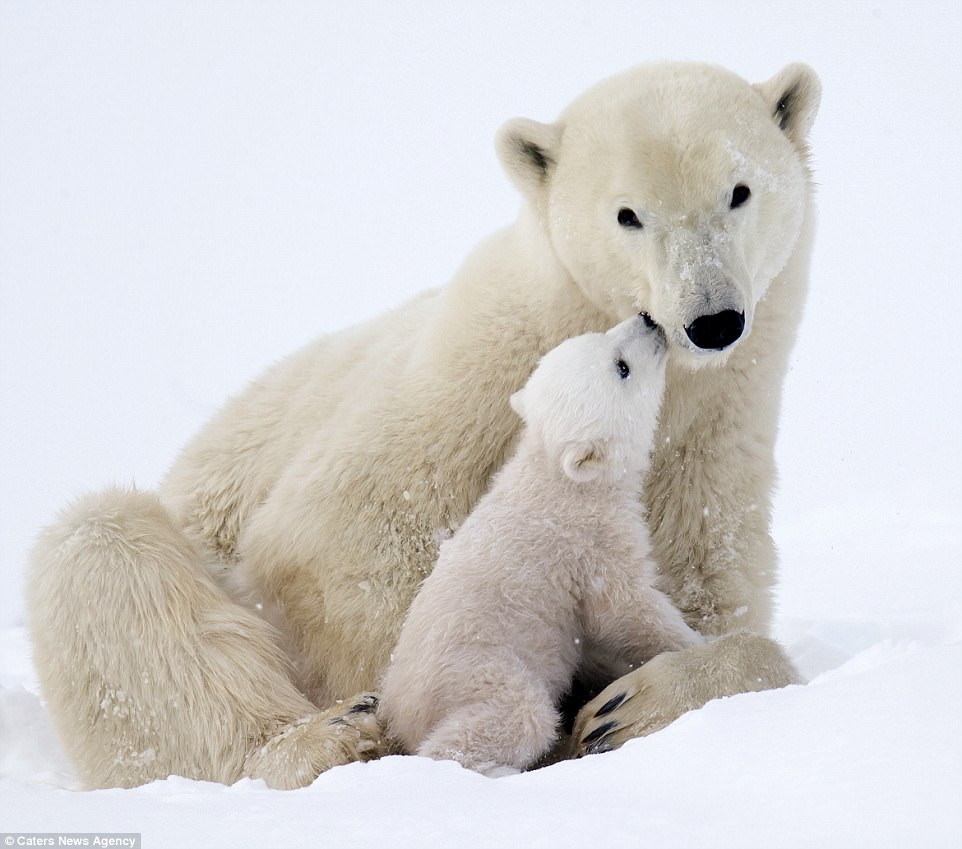 Kisses: This adorable snap shows one of the cubs reaching up to its mother’s face, pressing its little mouth against her fur 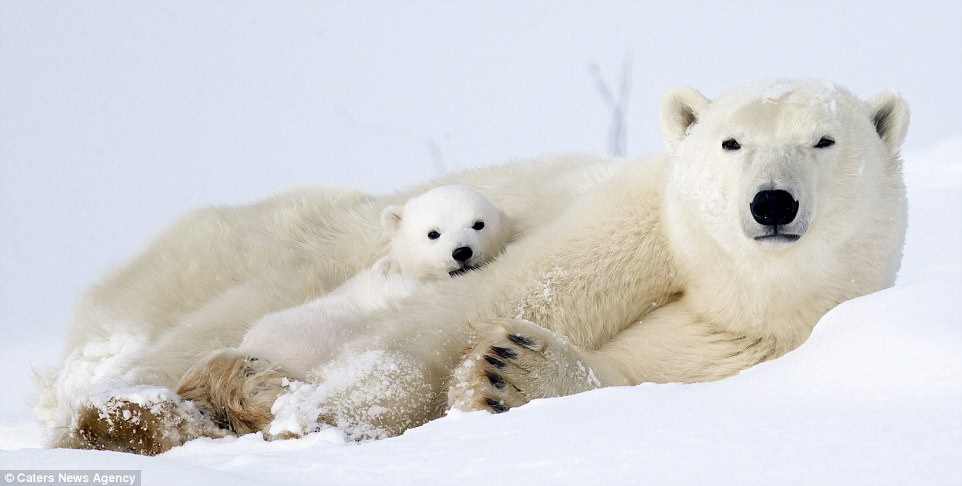 As the mother squints through the freezing snow, her cubs cuddle up in her warm coat to keep warm I’m tired! As the mother takes a much-needed rest from caring for her offspring, one of her babies lets out a huge yawn 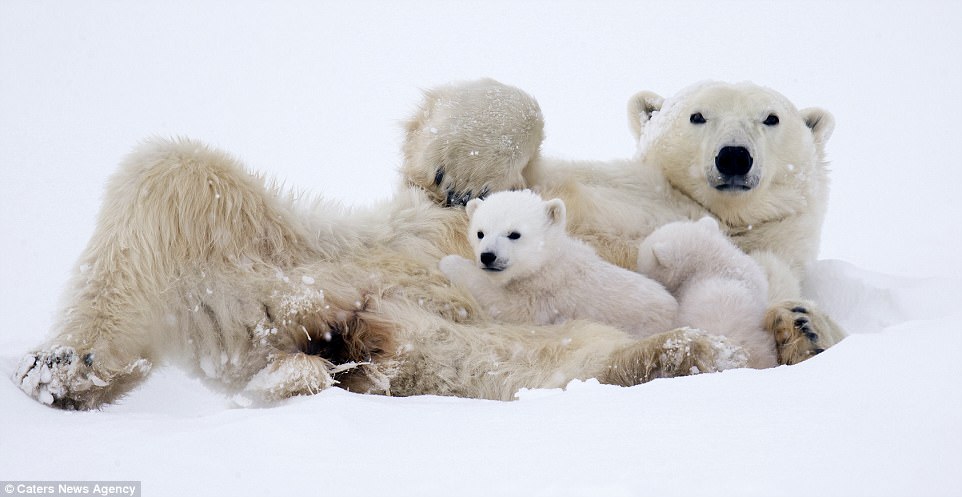 At one point the polar bear rolls over onto her back, revealing her two adorable cubs cuddling up to her underneath

Vince Burton, 44, who took the stunning shots, said: ‘It is such a privilege to be there and to witness this, not many people get the opportunity to see a polar bear and its cubs in the world.

‘Even less so possibly going forward as the ice is literally melting from beneath their feet and they are struggling to find food.

‘Its always rewarding when you treat the wildlife with respect, don’t upset it or scare it, then it just behaves naturally in front of you as if you weren’t even there.

‘My favourite pictures are always those that show natural behaviour or interaction, so I love the shot of the cub looking at its mum, and the shots of the cubs playing.’ 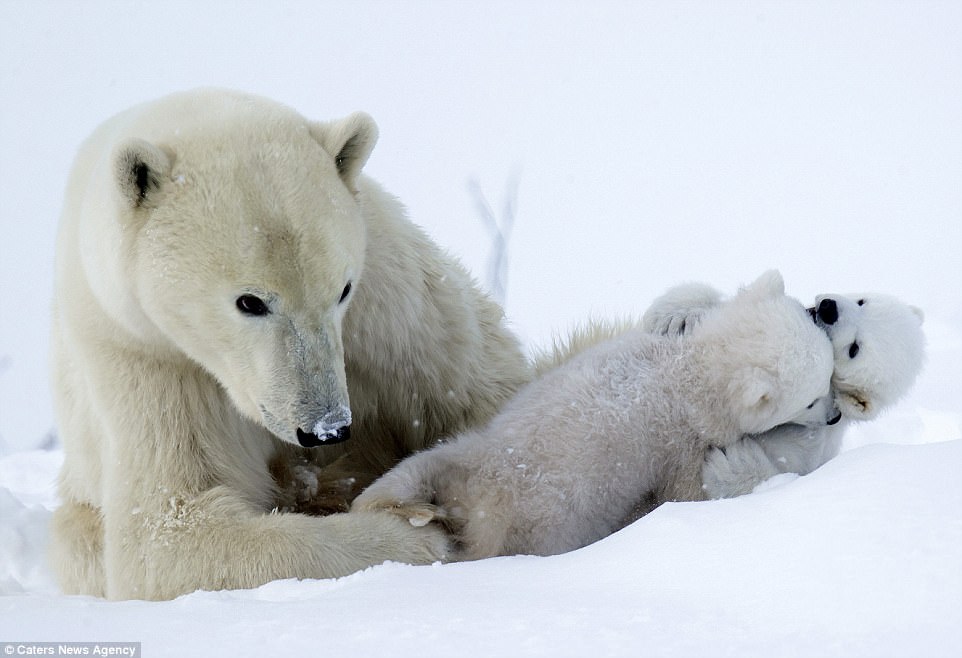 Fight me! The cubs can be seen engaging in some playful wrestling in the snow as their mother keeps a close eye on them 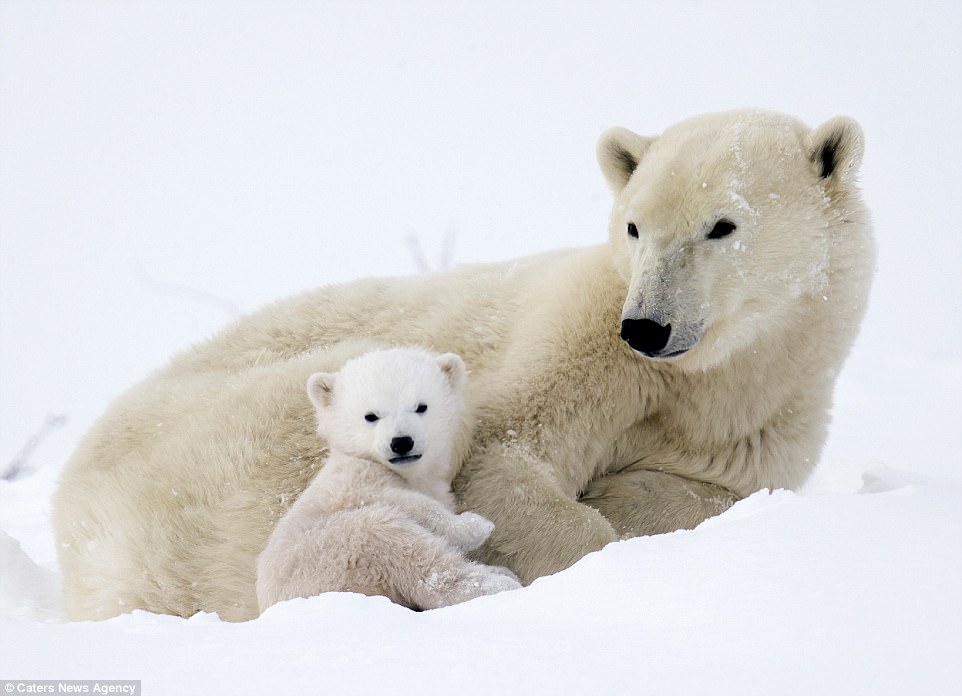 Who are you? At one point a cub glances over its shoulder at the camera, curious as to who is watching their fun in the snow 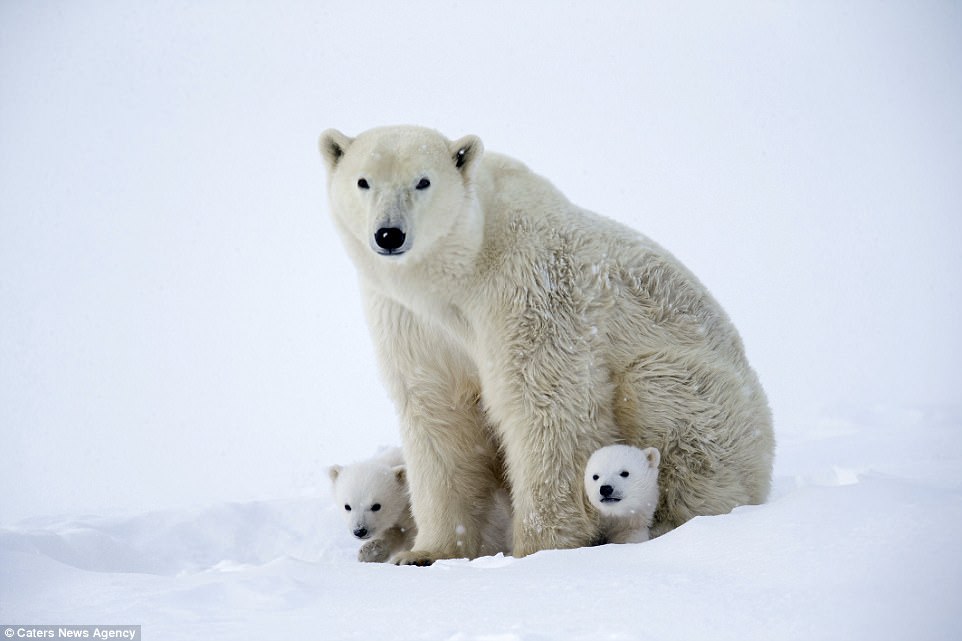 Peek-a-boo! The baby polar bears can be seen poking out from underneath their mother in the adorable wintry snaps 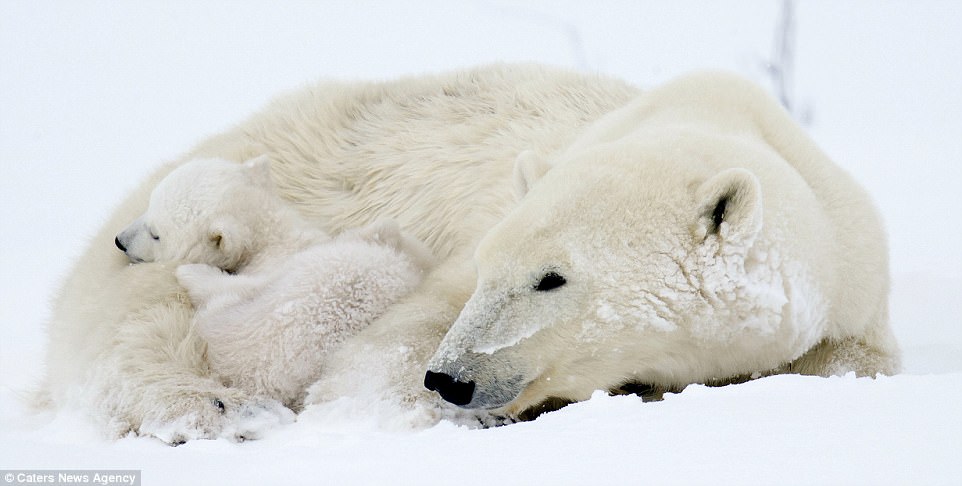 Time for a rest: This little cub nestles down in it’s mother’s hind legs for a snooze, cushioned by her enormous paws 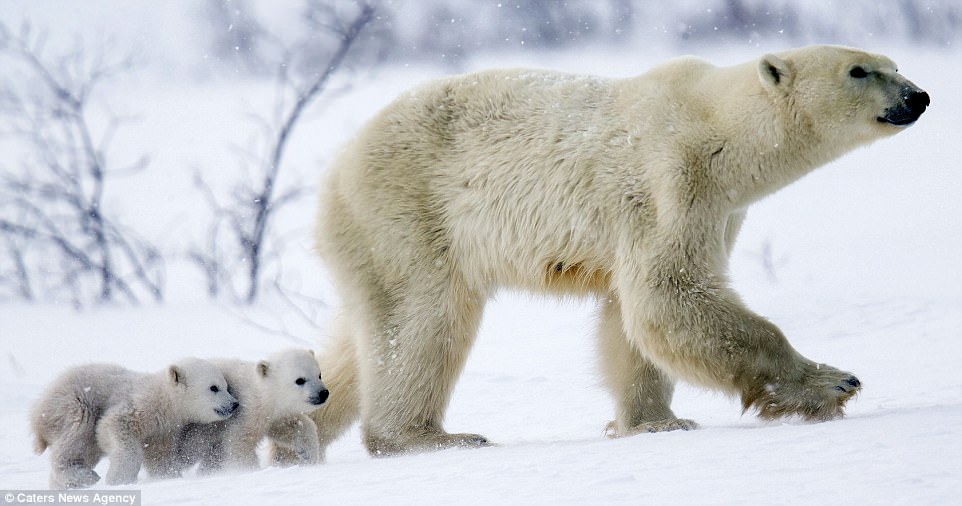 Chop chop! The mother takes the lead as they walk through the snow and her babies follow obediently close behind her