An animal lover who opened up her home to creatures of all shapes and sizes now shares her house with a staggering 90 pets, and almost all of them are named after Lord Of The Rings characters.

Adri Rachelle, 31, from Atlanta, has a massive menagerie which includes Bilbo Baggins the mule, Gandalf the goat, Frodo the spaniel and two cats named Boromir and Faramir, with her total hoard of animals costing her a staggering $10,000 (£7,800) a year on veterinary bills and food alone.

Adri even had a special bed constructed which is 10ft-wide so that at least four animals can pile in with her at night.

Adri Rachelle, 31, from Atlanta has a massive menagerie which includes 90 pets, including Leach the gekko, seen 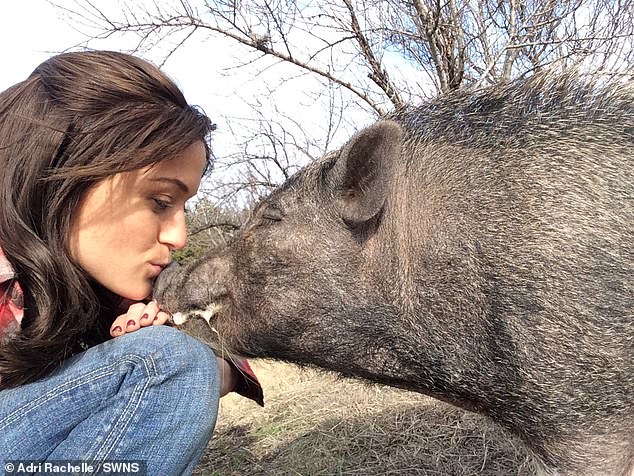 The dog walker has named most of her animals after Lord Of The Rings characters, including Gimli the pig (pictured) 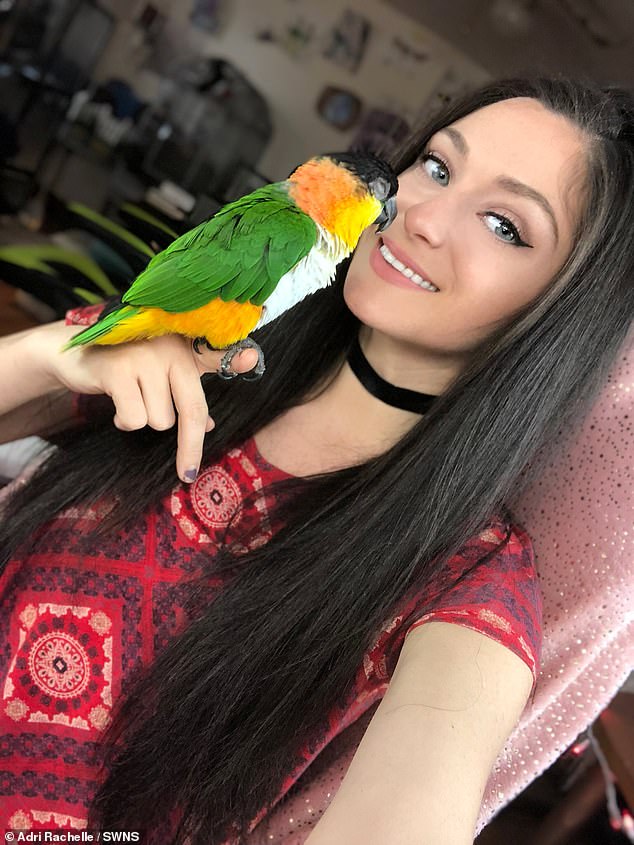 The animal lover, seen with Ralphie the parrot, even had a special 10ft-wide bed constructed so that at least four animals can pile in with her at night 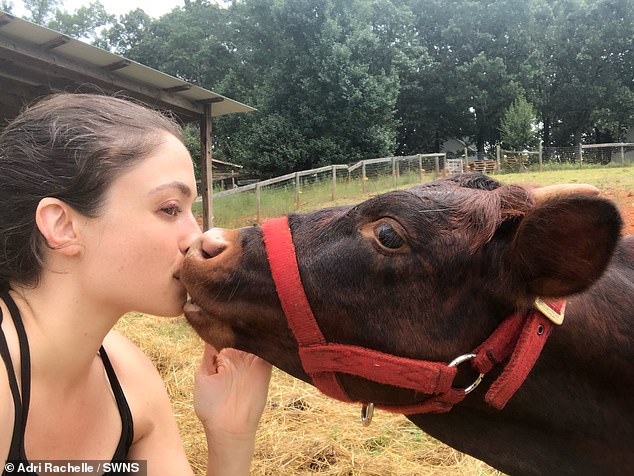 Additionally Adri, seen with Gendry the cow, splashes out a whopping $10,000 (£7,800) a year on veterinary bills and food for her pets

Additionally, she spends $10,000 (£7,800) a year on vet bills and food for her pets, including frozen mice for her snake, and roaches, crickets and superworms for her reptiles.

The J.R.R. Tolkien fan, who names most of her animals after characters in the author’s Lord Of The Rings trilogy, said: ‘I’ve always loved animals. I don’t think anyone is surprised that I’m living like this.

‘When I was a kid, my room was full of stuffed animals because I couldn’t get the real ones.

‘They do all have names and 80 per cent of them are named after Lord Of The Rings.

‘I’m a little obsessed with the books and the films.

‘Technically we haven’t run out of Lord Of The Rings names, but I really have to search for them now.’ 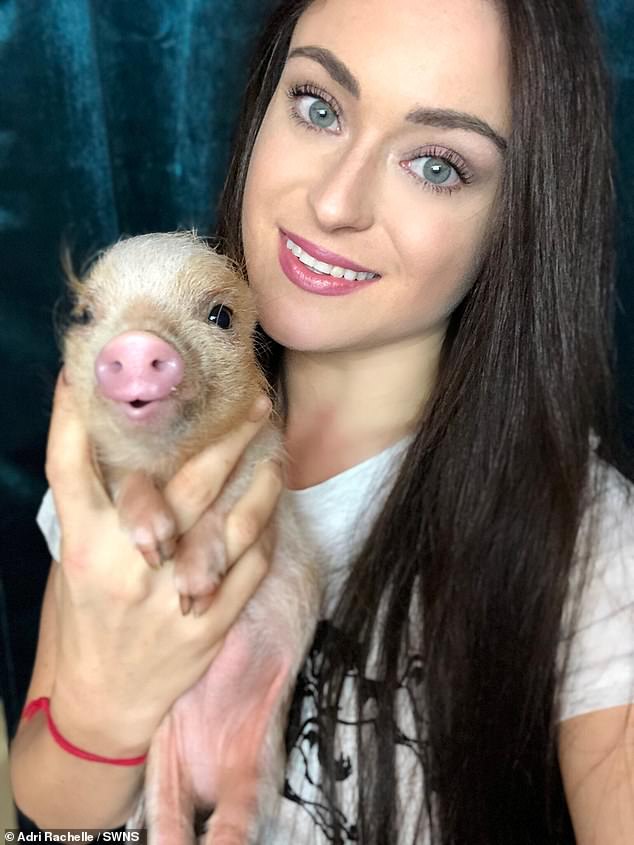 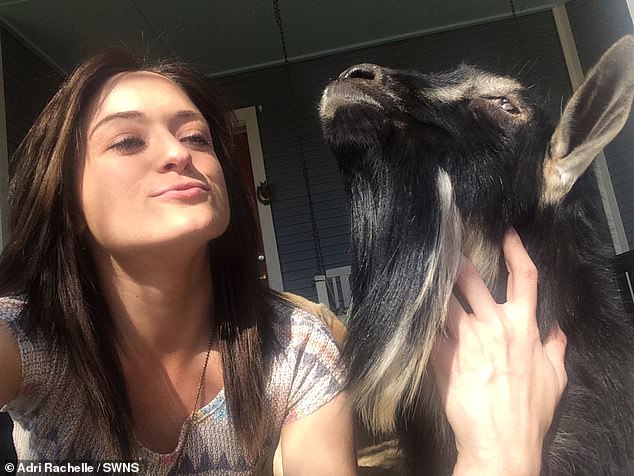 Adri, seen with Gandalf the Goat, has even rigged the home with cameras so she can always keep an eye on her beloved animals 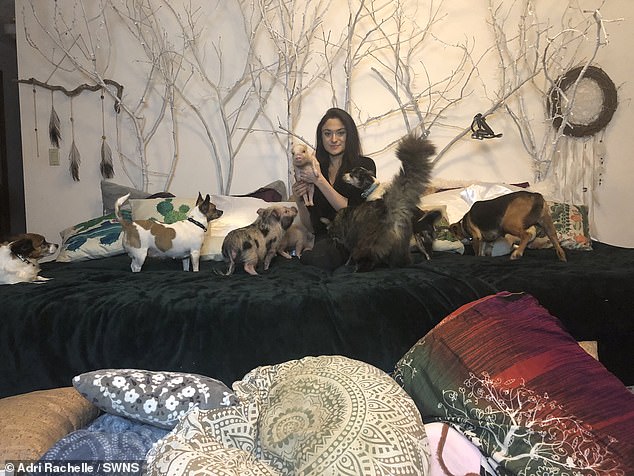 Adri with her animals in bed- she is seen with her dogs, cats and even piglets on her specially constructed 10ft-wide bed 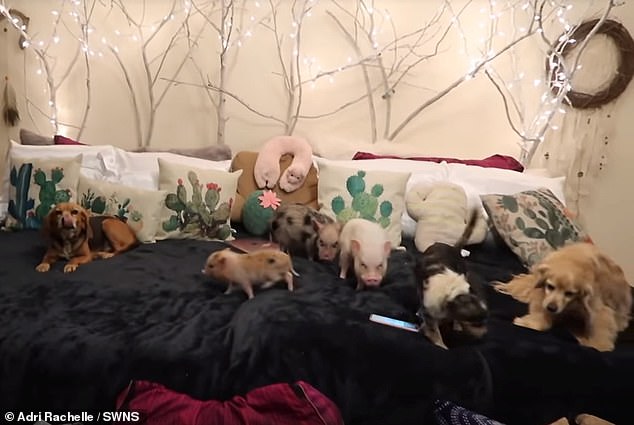 Adri has even set up tree branches in the headboard so the birds can sleep near her too, seen above

Speaking about her specially constructed bed, she added: ‘Without fail, the pigs will join me in bed and usually dogs and cats will come in too.

‘Even though I built a ten foot wide bed, they all still sleep on top of me.

‘I have set up tree branches in the headboard so the birds can sleep near me too.

‘I’ve taken naps with my rats before as well.’

Adri has even rigged the home with cameras so she can always keep an eye on her beloved animals.

‘The birds like to chew everything so we took out all the molding, the baseboards and carpets and child-proofed all the cabinets. 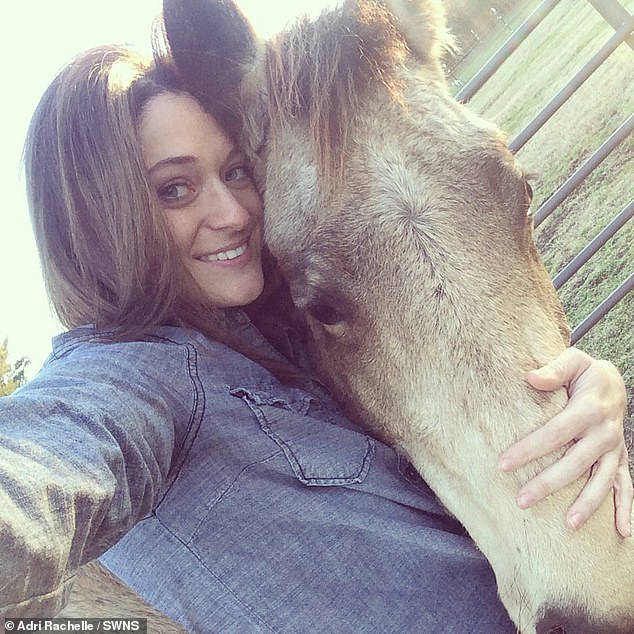 Adri Rachelle and Eowyn the horse are seen above. She says that 85 out of her 90 animals was adopted 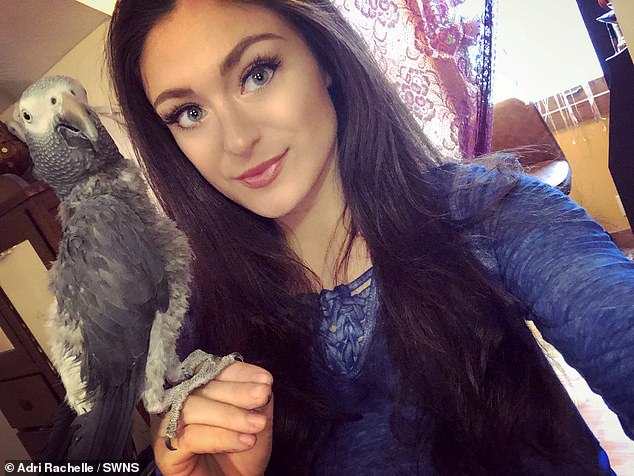 Adri Rachelle and her African grey parrot called Jazzie. She has a total of 90 pets living with her 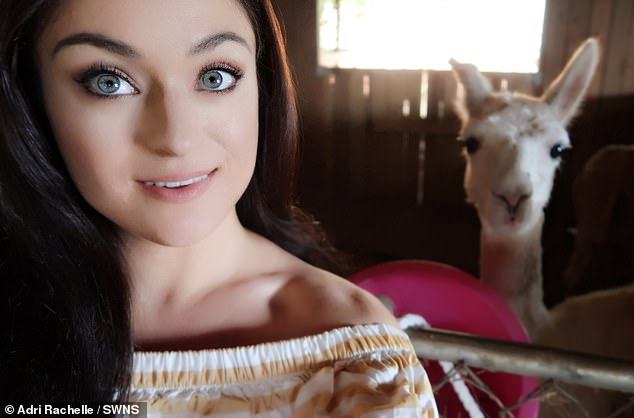 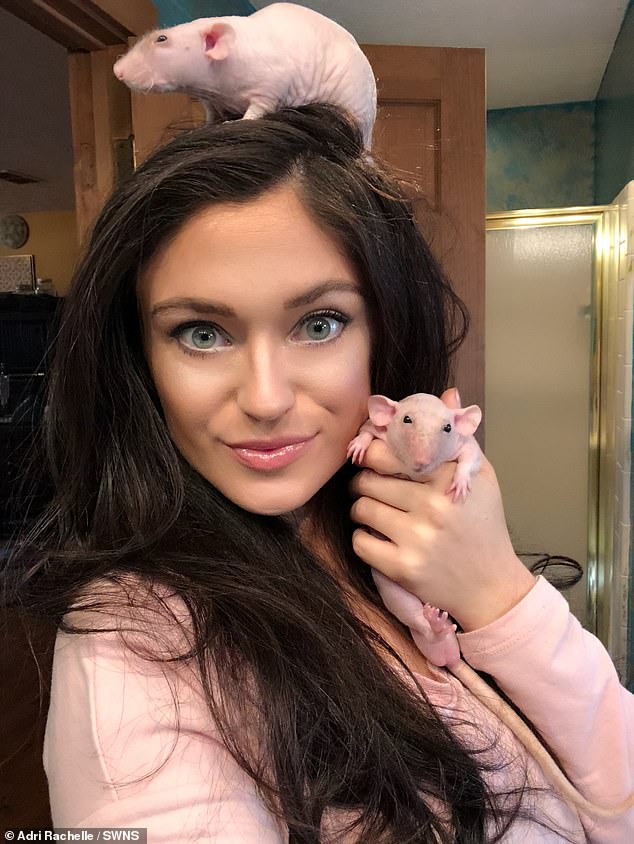 ‘Now they can fly free and not be locked in cages.

‘I have cameras set up so even when I’m not in there, I can watch them.

‘The dogs, cats and rats are with me in the main house, the pigs are all over and the birds, guinea pigs and reptiles live in the guest house.

But she admitted her animal-loving life is not for everyone.

‘I think for a normal person this would be a lot of work, a lot of noise and a lot of cleaning, but for me it is almost therapeutic,’ she said.

‘I get so much satisfaction from caring for my animals. Out of 90, only five of them weren’t adopted.

‘I’m able to provide unwanted animals with a home. This is my little piece of paradise.’

She has her feeding routine down to just 40 minutes a day and cleaning cages and enclosures takes another half an hour. 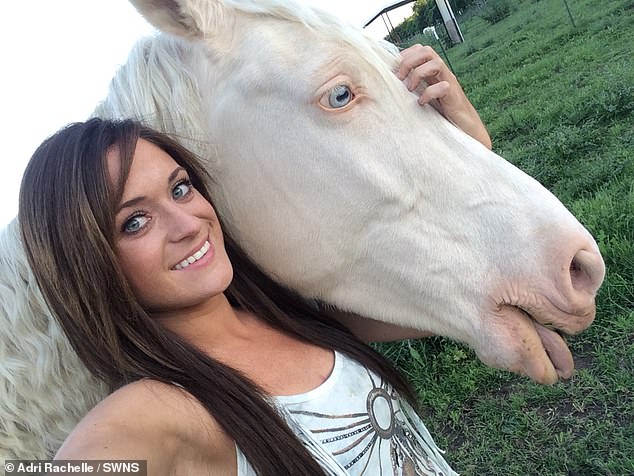 Adri Rachelle with her horse Lore. She has had her home adapted to take care of her 90 pets 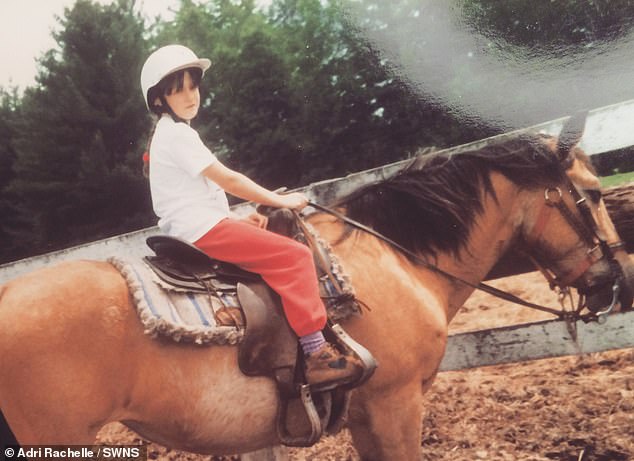 Adri Rachelle as a child on her horse. She got her love of animals from her parents 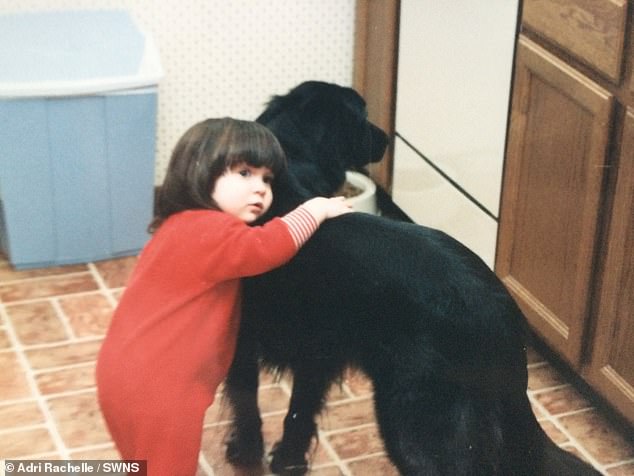 Adri credits her parents Larry Jacobs, 64, a retired natural resources specialist, and Cynthia Selby, 59, a retired nurse, for her animal-loving nature. Seen as a child 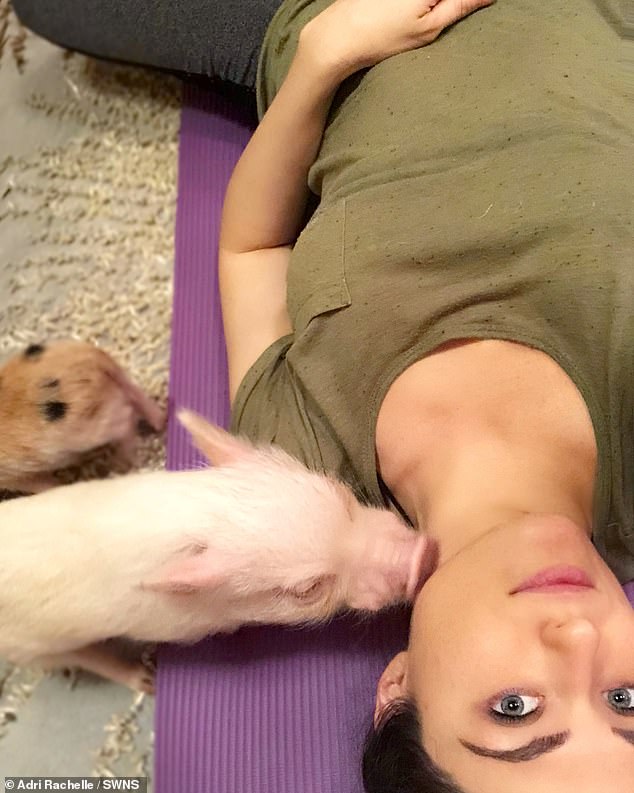 Adri is seen doing yoga with her mini pigs. She says there are always animals around her throughout the day

She said: ‘I like to make sure everyone is settled in and then I’ll feed the dogs their breakfast and I’ll feed myself if I’m lucky.

‘I give the rest of the animals breakfast around 10, fresh fruits and vegetables, hay and pellets for the horses, and all the pigs get bananas.

‘I’ve got it down to about 40 minutes. I like to clean all the cages every day. If you even skip one day, it can get out of hand.

‘I can go through and spot clean all the cages and enclosures in half an hour.

‘I just put on a podcast and do it.

‘At no point throughout the day am I without an animal.

‘The rats, ferrets and birds are always around me.

‘There is usually an animal on my shoulder, in my pocket and running around my feet.’ 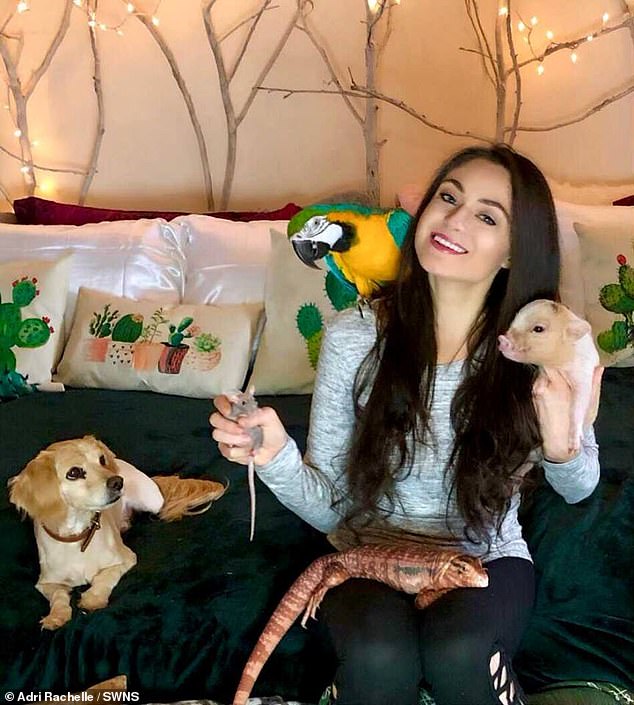 Pippin, the dog, Comet, the rat, Frankie the parrot, Falcor the teggu, Tator Tot the pig pose with Adri on her bed 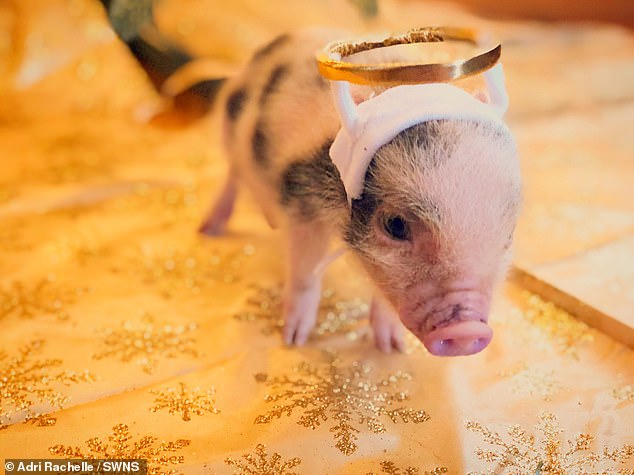 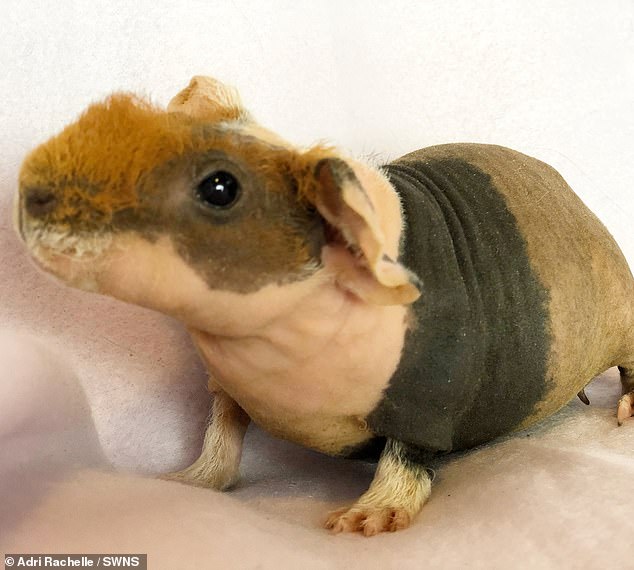 She said: ‘My dad would go out every year and counted endangered species like bald eagles, frogs and snakes.

‘My mom was constantly taking in stray animals like baby birds, kittens and dogs.

‘We raised chickens, rabbits and ducks.

‘Growing up, I probably had about 20 animals, I’ve always been that way.’

Ten years ago, she started taking in rescue pigs and her menagerie grew from there.

Her family sometimes wishes she would focus on herself instead of her many pets but Adri defended herself from accusations of animal hoarding.

She said: ‘There’s nothing I’d rather be doing with my time or money than looking after animals. 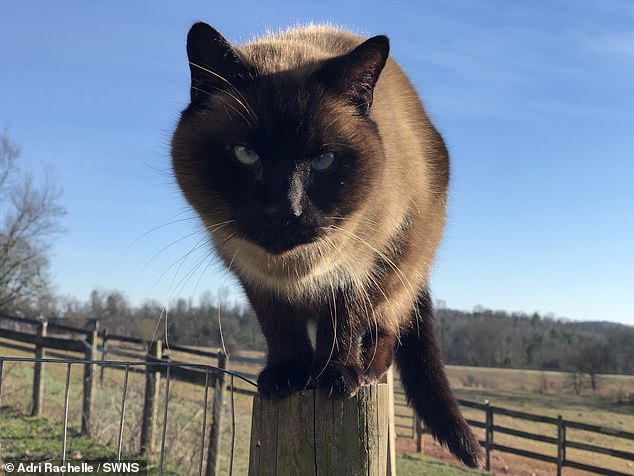 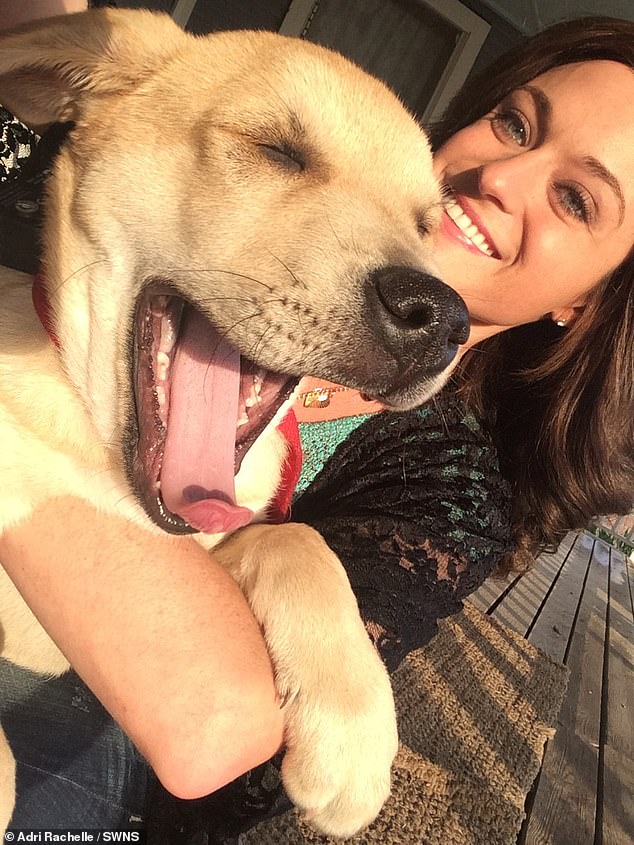 Adri, who goes by Adri Rachelle on YouTube, also has a beloved dog called Frodo, but says she is never going to be someone ‘who just has one dog’ 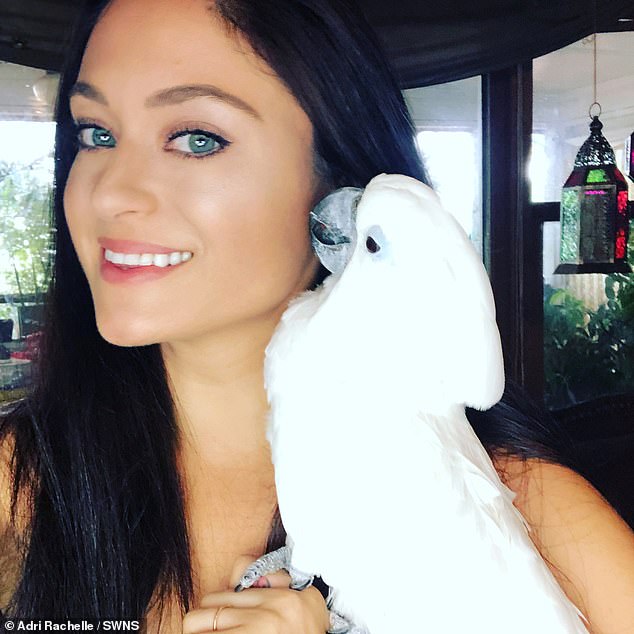 Adri with Rosie the cockatoo, who adores her much like the other 89 animals she keeps 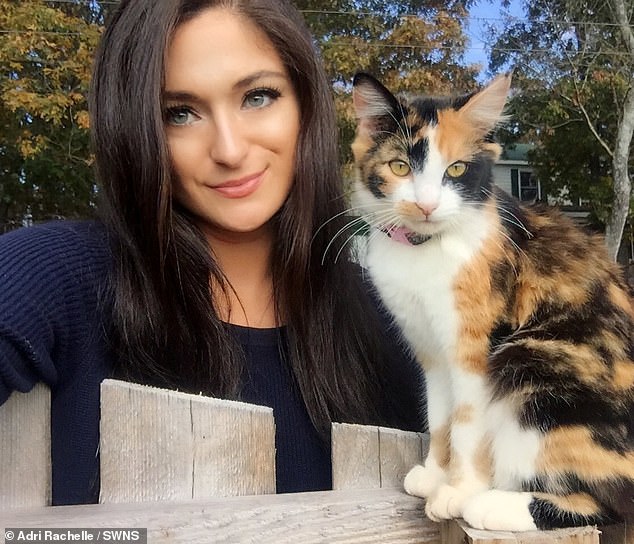 ‘I ended up with all of these animals because other people had taken them in and didn’t want them.

‘A lot of them arrived in terrible conditions. People say I’m an animal hoarder.

‘But there are people who have failed at having just one animal.

‘Here I am with other people’s animals all around me and I’m doing a good job.’

Adri shares her animal-loving life on Youtube as Adri Rachelle.

She is applying for non profit status and hopes to turn her home into a sanctuary so that she can take in even more animals.

She said: ‘I want to make it an actual sanctuary so I can take in wild animals and work with them.

‘I am never going to be someone who has just one dog.’