One of the perks Adrian Edmondson enjoys about being in a television drama is that, after a series has been filmed, he’s able to buy some of the clothes his character has worn. It’s a happy souvenir, he says, of good times on set. Or at least it is normally. After shooting Save Me Too, the second series of Lennie James’s compelling Sky drama about a man searching for his missing teenage daughter, he took home a pair of trainers he’d sported as the baddie Gideon Charles. And he discovered they came with a significant problem.

‘I found I couldn’t bear to wear them,’ he says. ‘I look at them and think of Gideon Charles. I’ve had to give them away.’

Because Charles is the very worst kind of modern monster. Behind a cynical veneer of model citizenship, he trades in kidnapped underage girls, selling them on to be abused. Indeed, playing a character this revolting has been a big challenge.

‘It is very weird playing a sex offender,’ he admits. Not least because of the possibility that the actor might be confused in the public mind with the character.

‘Yeah, there is a fear you’ll get shouted at in the street,’ he says. ‘The guy who played Nick Cotton in EastEnders [John Altman] used to get a lot of abuse. I’m just hoping as I’ve got a varied work history, I won’t be thought of solely as a horrible paedophile.’

Edmondson’s work history is varied all right. He has been a comedian, a children’s author and a serious actor. He was in Star Wars: The Last Jedi, had a role in EastEnders, and his band played at Glastonbury. Impressively, he has achieved the cookery double of winning Celebrity MasterChef and Celebrity Bake Off. He’s even sung in musicals, just completing a three-month revival of The Boy Friend. He has achieved so much he has confused himself as to how to explain what exactly it is he does for a living.

‘I’ve no idea what I am,’ he says. ‘I’m not saying that for effect. All I do know is that if people hope I’ll be funny away from the screen they are usually disappointed.’

‘I was always angry,’ Adrian Edmondson explains. ‘I don’t want to get too Freudian but just look to Larkin: “They eff you up, your mum and dad.” It got to the point that I couldn’t get in a car without shouting like a maniac. I had to do something because those close to me told me I couldn’t go on with these shouting sprees’

Edmondson is being self-deprecating. He is more than amusing company. Not least in his physical reaction to the strictures of introduction brought about by the coronavirus pandemic. When offered an elbow to touch in place of a handshake, he goes into a magnificent all-elbows-and-knees mock cockney dance as if auditioning for a part as a Pearly King. Plus, he laughs a lot, constantly amused at the oddities of the world. Such as when he is asked if he still watches The Young Ones, the bonkers sitcom about a student flat-share that – as the unhinged punk Vyvyan Basterd – first brought him to national attention 40 years ago.

‘I’ve seen it occasionally,’ he says. ‘It looks tired and slow. If you watch The Good Life now though, you think: yeah that still looks relevant. You think: that’s funny.’ 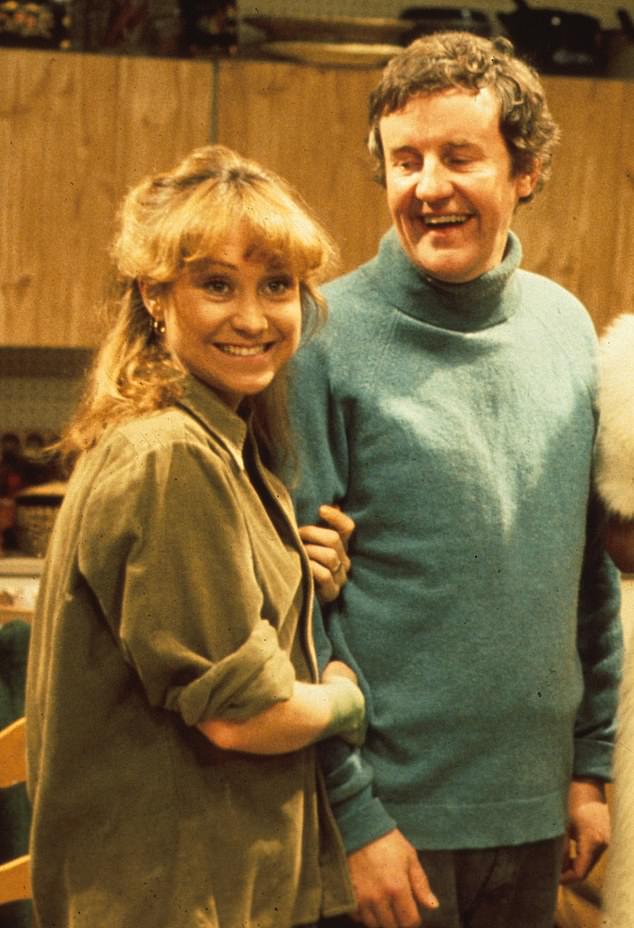 Richard Briers and Felicity Kendal in The Good Life. ‘If you watch The Good Life now though, you think: yeah that still looks relevant. You think: that’s funny’

And he cackles at the thought. After all, when he and Rik Mayall – his long-time comedy partner whom he met at Manchester University – smashed into the collective consciousness with The Young Ones, they were supposed to blow such old-school sitcoms out of the water.

‘I think you might be overstating what effect we had,’ he says when it is suggested he was a comedy revolutionary. ‘We were always a cult. Which is a nice way of saying we delivered very low audience figures.’

Nevertheless, with Mayall he went on to give us some unforgettable moments in their double act Bottom, most involving hitting each other round the head with blunt instruments. ‘It was a human cartoon,’ he says. ‘We were inspired by Road Runner.’

And he has to admit, if The Young Ones had no lasting repercussions, Bottom did. Personal ones at least. ‘I got a part in Star Wars because Rian Johnson, the director, was a huge fan of Bottom. As a student, he’d filmed his mates doing an episode. So when he approached me and said would you like to be in Star Wars, I couldn’t turn him down. Not that I would have done anyway. It was extraordinarily good fun. Though sadly – and I really hope this won’t ruin it for you – they don’t actually film it in space.’

He roars with laughter. He used to do a lot of laughing with Mayall, he says. His old comedy partner is still in his mind, six years after he died of a heart attack aged 56.

‘It’s very hard for him not to pop up. I have pictures of him in my study. The rawness of his loss has gone a bit, but he’s always there. I’ve lost a lot of people. Makes me sound like a saddo, but I have. I’ve lost about five of my top ten. Rik isn’t the only one I miss.’

Much to his evident relief, one person who is still with him is his wife, Jennifer Saunders. They met on the alternative comedy circuit in the mid-Eighties. Thirty-four years on, their marriage is more than intact, though he is reluctant to try to pinpoint what has made it last. ‘I always give the same answer to that question: we don’t talk about it. The curse is talking about it.’ But he then suggests the fact that they pursue different interests ensures they are not in competition. ‘She likes to do more comedy; me more serious stuff,’ he says. ‘But we’re both in our 60s and we’ve reached an age where we’re not thrusting any more. It’s a nice situation to be in.’

Though, when asked about his penchant for cookery, he hints that a competitive edge might still remain in their relationship.

‘Jennifer’s got a load of Baftas on our shelf and I’ve got cooking trophies,’ he laughs.

Cooking is a big part of his life; he does most of it in the family homes in London and Devon.

‘I went to a boarding school, because my dad was a teacher in the Forces living abroad, and there simply wasn’t enough food. So I’d make my own, in a cupboard under the stairs, on a single electric ring,’ he says. ‘On the first episode of MasterChef we were given a load of surprise ingredients, and told to make something. I was terrified. My head was full of white noise. I thought, well I’d better start with an onion, but I couldn’t chop it because my hand was shaking like a leaf. Basically, you are trying to avoid total humiliation.’

He says what helped him not to crumble was his embrace of the ancient philosophy of stoicism. He took to it in order to assuage an anger that had bubbled since childhood. His character, Vyvyan, from The Young Ones was based on the wilder outpourings of a very personal rage.

The Young Ones was always a cult. Which is a nice way of saying we delivered very low audiences

‘I was always angry,’ he explains. ‘I don’t want to get too Freudian but just look to Larkin: “They eff you up, your mum and dad.” It got to the point that I couldn’t get in a car without shouting like a maniac. I had to do something because those close to me told me I couldn’t go on with these shouting sprees. It wasn’t pleasant. I tried therapy, but that didn’t work. I found stoicism did. What it says is, basically, if you get cut up by someone when you’re driving, you have to think being angry doesn’t hurt the guy who cuts you up, it hurts you. You end up as a net loser. Think about that enough and it works.’ 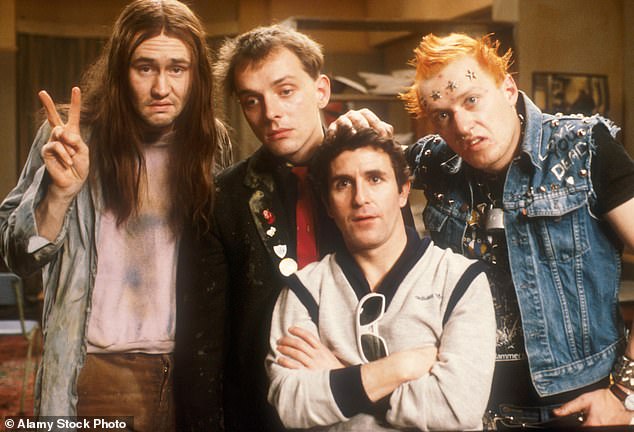 Stripped of explosive temper, his life, he says, is now far more serene. Not that he has entirely rid himself of emotion. He admits not even MasterChef was as nerve-racking as his daughter Beattie’s stand-up comedy debut.

‘Absolutely terrifying,’ he recalls. ‘Everyone looked at us as we made our way into the theatre. She was in a double act and they had a sketch where she was a heckler in the audience. We tried to find a place to sit where we were a bit out of the way, and there was a spare seat next to us. It was the one where she sat when she was planted in the audience. So everyone was looking at us and her. I could feel through the chair her heart pounding as she started heckling. Scariest moment of my life.’

But all three of them got through it. And now Beattie is about to start on a major new television series. Or rather she was. ‘Shooting’s been postponed because of the virus,’ he says. ‘These are strange times.’

Edmondson, though, reckons he might be well equipped to deal with the isolating constrictions of the pandemic. At the family farm in Devon he bakes bread, brews beer and keeps chickens. ‘I’m getting close to self-sufficiency. I’m heading towards The Good Life.’

And he roars with laughter once more at the irony of the man who played Vyvyan Basterd turning into a 21st-century Tom Good.