Adventurer, 60, hanged himself within hours of his partner dumping him, inquest hears

Andrew Barton-Taylor (pictured) took his own life in Crowthorne, Berkshire, on November 29 after Ann Harvey ended their romance

An adventurer hanged himself within hours of his partner dumping him after an ‘up and down’ 11-year relationship, an inquest heard today.

Andrew Barton-Taylor took his own life in Crowthorne, Berkshire, on November 29 after Ann Harvey ended their romance.

The 60-year-old had struggled with depression since his divorce in 1996 and had been hooked on cocaine during his time with Ms Harvey.

She left his house at 4.26pm and two minutes later Mr Barton-Taylor grabbed a yellow rope from his shed before going back indoors, CCTV showed.

His devastated son Rickey told the court today: ‘I think it is important to detail the mental torture and humiliation Ann Harvey and her family put my father through.

‘It explains why he was suffering so badly with his depression and, in my opinion, took his own life.’

In a statement read to the inquest, Ms Harvey said: ‘I planned to end the relationship so I attempted to speak to him about it.

‘I advised maybe we should stop all contact and he said he would stop taking cocaine.

‘He asked me to stay for a coffee but I left. He was a broken man but appeared fine. While driving home I missed a call from him, I called back and left a voicemail. 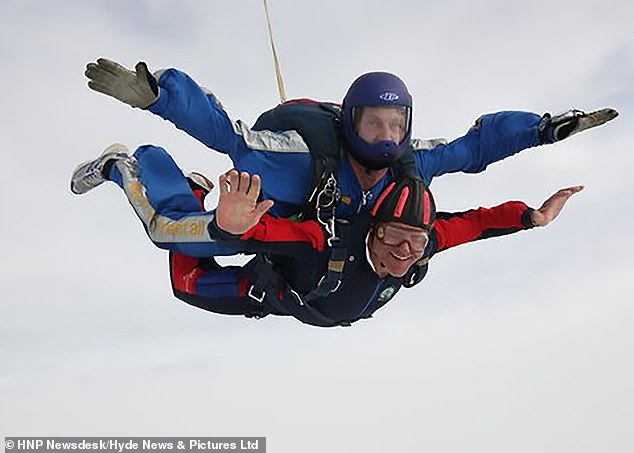 The 60-year-old (pictured bottom, skydiving) had struggled with depression since his divorce in 1996 and had been hooked on cocaine during his time with Ms Harvey

‘I received a text message which read ”I am going to unlock the door, goodbye” so en-route to work I stopped at his address to check on him.’

CCTV footage showed her arrive at Mr Barton-Taylor’s house at 6.54pm, before she ran out screaming two minutes later.

She alerted the neighbours to what had happened.

Mr Barton-Taylor was found hanged in his home and today a pathologist confirmed the cause of his death was asphyxia due to hanging.

The coroner heard about the 60-year-old’s battle with depression and anxiety.

A month before he was due to travel to Mount Everest base camp, Mr Barton-Taylor overdosed but survived.

He told the GP he was ‘glad to be living’ and was looking forward to climbing the world’s highest mountain.

But the explorer was medically evacuated from Everest due to issues with the high altitude on December 9, 2016. He then said ‘life was not worth living’.

The coroner heard how in February 2017 Mr Barton-Taylor overdosed again.

Assistant coroner Alison McCormick said: ‘It is clear that Andrew had a strong and supportive family, illustrated by the fact six members of his family are listening to proceedings today/yesterday (Tues). That speaks volumes about how loved he was. 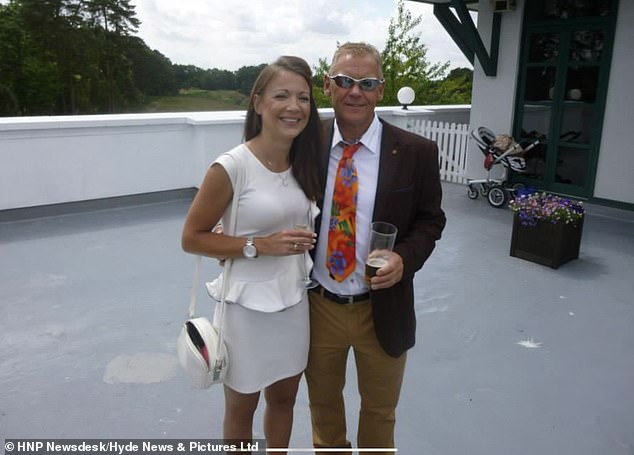 ‘He had been in a relationship with a Ann Harvey. However there were difficulties and they no longer shared the same house.

‘He had a long history of depression and a part of that was dealing with the death of his parents.

‘He was a long term user of cocaine and there were periods of his life were he was drinking heavily.

‘He had used cocaine in the period prior to his death. On the afternoon of November 29 2019, Ann Harvey attended his home address – it was her intention to end the relationship.

‘She suggested they should cease contact and she said she would think about the relationship over the weekend.

‘Within minutes of her leaving his house, CCTV showed him going to his shed and return to his house carrying a length of rope.

‘Ann Harvey went to check on him on her way to work after receiving a text message and she found him in the stairwell hanged from a rope.’

The coroner concluded a verdict of suicide.

In an emotional tribute, his daughter Sophie said: ‘Our father was a funny, charismatic and well-respected man.

‘He was an avid footballer, popular on and off the field. He was known for his hard-working and meticulous nature.