A consultant at one of the country’s largest A&E units has apologised for the ‘third world conditions’ endured at his hospital this weekend.

Dr Richard Fawcett, who works at the Royal Stoke University Hospital, revealed that the department had run out of corridors to house patients.

His heartfelt tweet, which made national headlines on Saturday, described the true situation that faced many A&E units across the country.

He has now blamed the crisis, which saw some patients have to wait 12 hours to see a doctor and ambulances stacked up outside, on overcrowding.

Dr Richard Fawcett, who works at the Royal Stoke University Hospital, apologised for the third world conditions at this A&E department

Dr Fawcett tweeted: ‘As an A&E consultant, I personally apologise to the people of stoke for the 3rd world conditions of the dept due to overcrowding [sic]’

Strangers responded to his tweet, posted this morning, in admiration for his honesty and refused to blame him for the situation at the hospital in Staffordshire.

Experts fear this winter will be the worst on record for the NHS, despite last year’s being branded a ‘humanitarian crisis’ by the Red Cross.

Pressures on the NHS have escalated rapidly over the festive period with hospitals experiencing significant bed shortages.

Doctors have described corridors overflowing with patients and ambulances queuing outside A&E as the winter flu season begins to take hold.

Dr Nick Scriven, president of the Society for Acute Medicine, has said many hospitals reported more than 99 per cent capacity in the week before Christmas.

He warned services are being placed under significant strain and called for non-urgent operations to be postponed until at least the end of January.

Speaking yesterday, he urged hospitals to prepare for extra demand, adding: ‘I fear for acute trusts this next week. 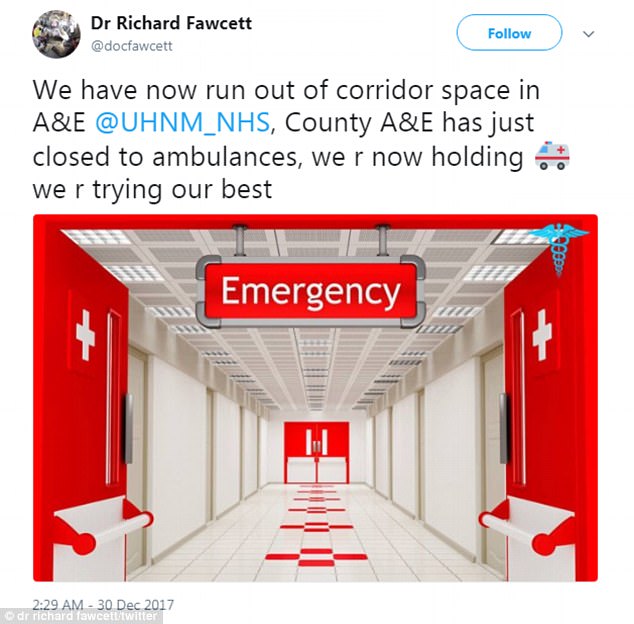 Emergency: Dr Richard Fawcett revealed he is having to turn away A&E patients because even the corridors are too full

‘Since the [Christmas] bank holiday things have escalated rapidly and we are on the cusp of a major issue at least as bad as last year.’

Professor Chris Moulton, vice-president of the Royal College of Emergency Medicine – which represents A&E doctors, said: ‘Everyone is busy.

‘It’s clearly not just a few isolated hospitals that are having problems. It’s pretty much spread throughout the whole NHS.’

Firefighters with six days of first aid training are being sent to thousands of medical emergencies.

They are being dispatched in fire engines or cars to treat patients who have suffered cardiac arrests, strokes, fits or heavy bleeding.

Last year, fire crews were sent to more than 44,000 emergency calls which would normally have been dealt with by ambulances – a rate of 120 a day.

The situation has come about because ambulance services are struggling to cope with a surge in calls on top of a recruitment crisis of paramedics.

The volume of calls has increased partly because the population is rising and ageing and patients are finding it increasingly difficult to see a GP.

At the same time, calls to the fire service have declined thanks mainly to major improvements to fire prevention and safety.

At the Royal Stoke University Hospital, where Dr Fawcett works, campaigners have blamed a lack of beds for the growing crisis.

They warned beds that could have been used by A&E were being blocked because community hospital transfer beds had been axed.

The NHS is facing a new beds crisis- far worse than last year – according to new data that shows many were 100 per cent full for long periods of last month.

Vital, time-critical operations are also being delayed for long periods due to the chronic beds shortage gripping the NHS.

Some hospitals have barely had a single free bed since mid-November, recording night after night of being ‘100 per cent’ full.

On December 11, the busiest night to date, 18 major hospitals in 12 NHS trusts across England did not have a single spare bed.

Average bed occupancy for the winter so far currently stands at 93.8 per cent, compared to 92.1 per cent at the same stage last year.

Doctors say hospitals should not routinely be more than 85 per cent full, as the risk of dangerous infections and delays increases above that level.

Only seven NHS hospital trusts out of 153 have had average bed occupancy below 85 per cent this December – down from 17 at the same time last year.

Dr Taj Hassan, president of the Royal College of Emergency Medicine, said: ‘Last winter we said, “This is the worst in 15 years”. But I think this winter it’s even worse.’

He said the lack of beds meant the practice of ‘boarding’ – where patients in trolleys are placed in the middle of wards or in corridors – was now common. 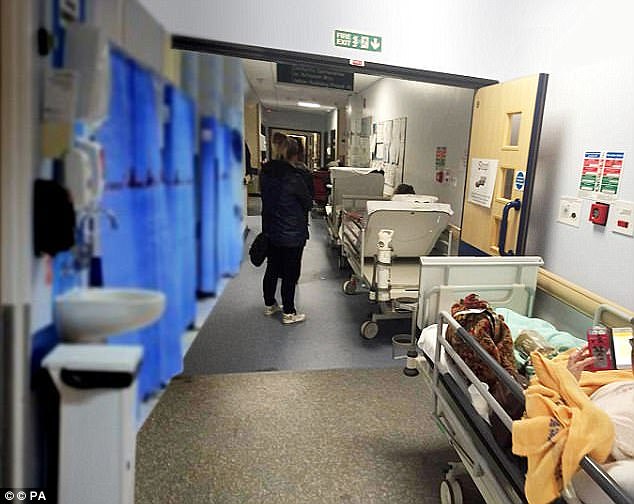 Patients at the University of North Staffordshire Hospital were waiting 12 hours to see a doctor because of the bed crisis. There’s now not even room for sickly people in the halls (stock image)