Disney have revealed an incredible sneak peek of its second Star Wars: Galaxy’s Edge attraction due to open in two weeks.

The eagerly anticipated opening in Orlando, Florida, on August 29, will be the theme park’s second location.

Impressive aerial footage showcased the stunning otherworldly landscapes of the planet of Batuu.

A life-sized hyper-detailed replica of Han Solo’s iconic ship the ‘Millennium Falcon’ was shown docked in the middle of Black Spire Outpost on the grungy colored grounds.

Lucky guests will not only be able to take their picture with the 100-foot-long ship and roam its halls, they will also have the chance to do something many Star Wars fans have always dreamed of: to fly it.

The birds-eye-view of the park also showed smaller aircraft around the park, a bustling market place and the large domed roofs on Star Wars area themed village.

The new-opening comes after third quarter profits suggested that Star Wars was not resonating with younger audiences and a lower than anticipated attendance than for the attraction in California, which opened in May.

The iconic Millennium Falcon (above), the faithful aircraft of Harrison Ford’s beloved character Han Solo, was among the first aerials to be revealed. The spaceship was shown docked on the grungy planet of Batuu 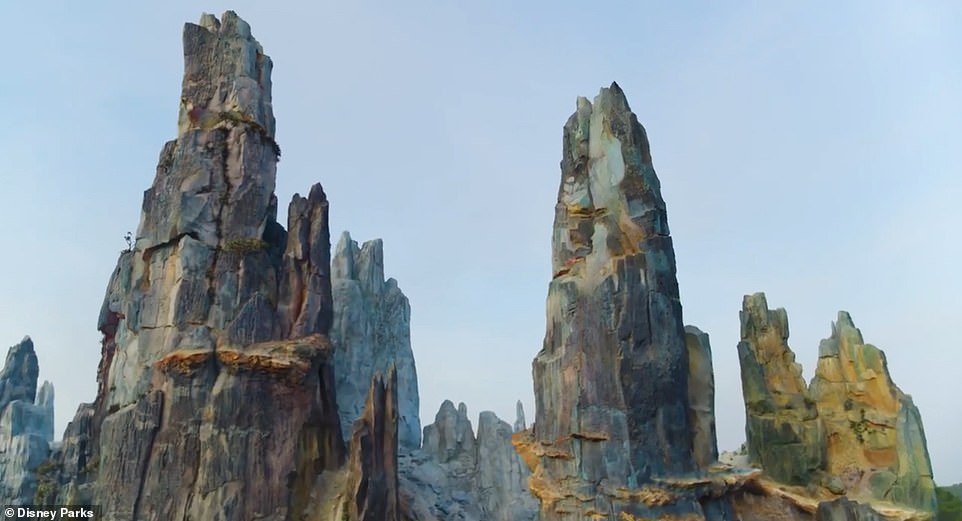 Multicolored markings line cracks in some of the rock on the alien landscapes found in Batuu. The planet is the fictional otherworldly home for Star Wars attraction 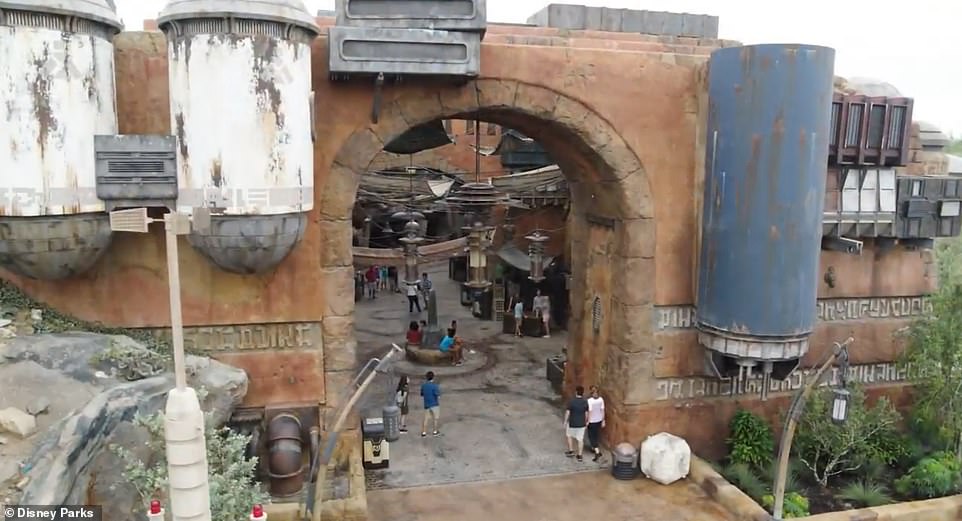 A soon-to-be busy market place where was also shown in the aerial footage, where guests will be able to go to a ‘Cantina’ style bar and order drinks inspired by the franchise 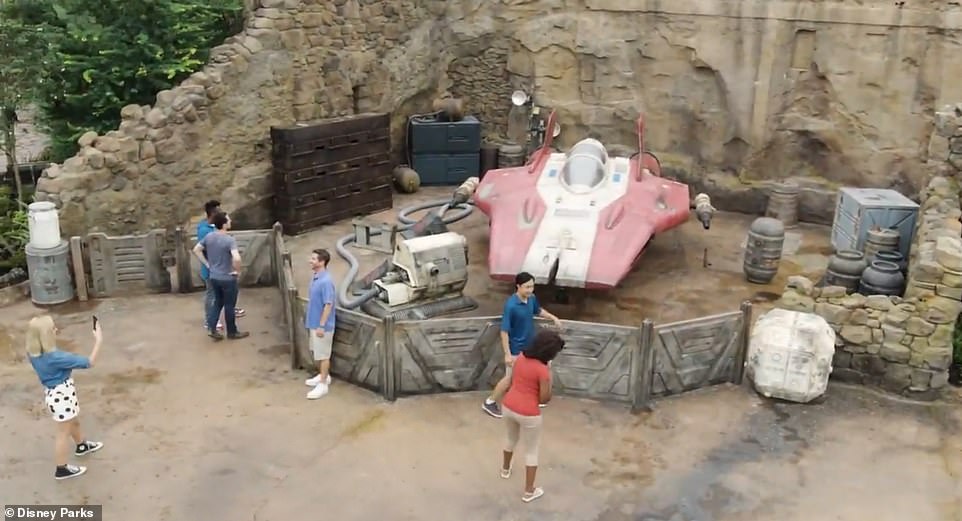 A smaller craft was also revealed in the trailer alongside some eager guests. The aerials revealed the Orlando, Florida’s adaption of the Star Wars park for the very first time 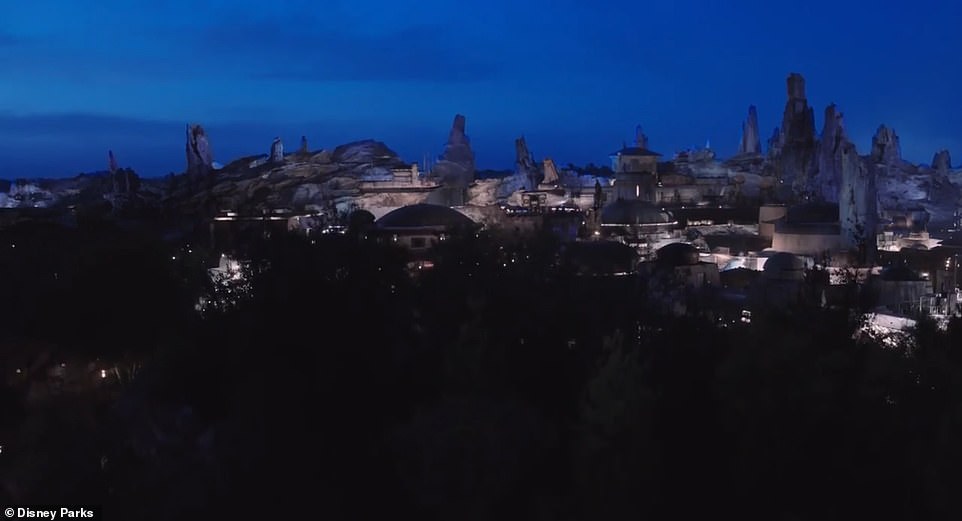 Now at night a dim glow illuminates the city on the planet of Batuu, where Star Wars: Galaxy’s Edge is based

Disney released a trailer that gives a glimpse of the Millennium Falcon: Smugglers Run ride and shows guests taking the legendary ship to light speed.

Characters from the films guide visitors through, with Chewbacca appearing on screen and Weequay pirate Hondo Ohnaka telling them their mission: to acquire a supply of the hyperfuel known as coaxium from Han Solo’s homeworld of Corellia.

Groups of six commandeer the cockpit in the interactive experience: a pilot, co-pilot, two gunners and two engineers, assigned at random by a cast member. 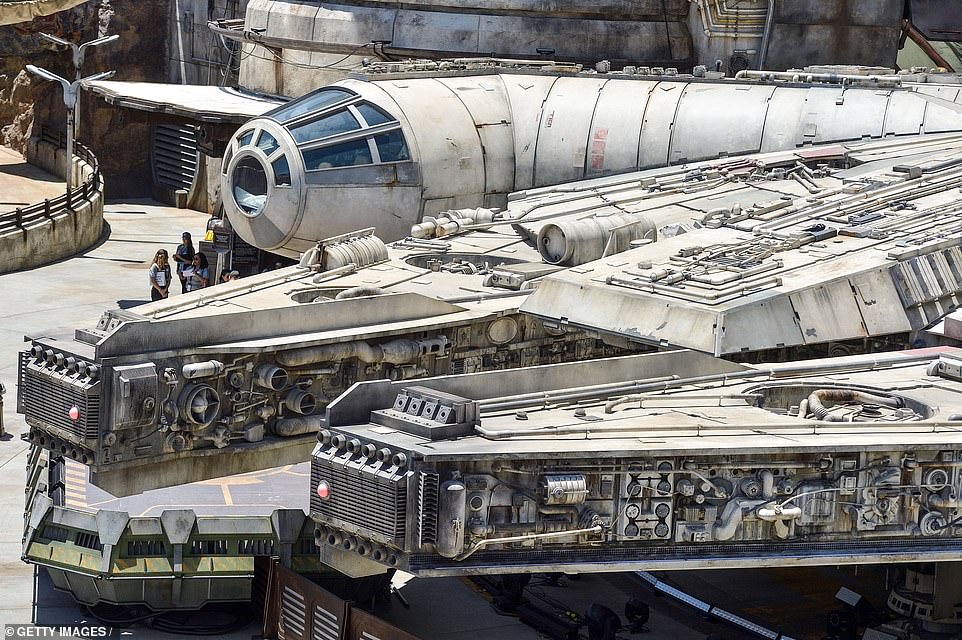 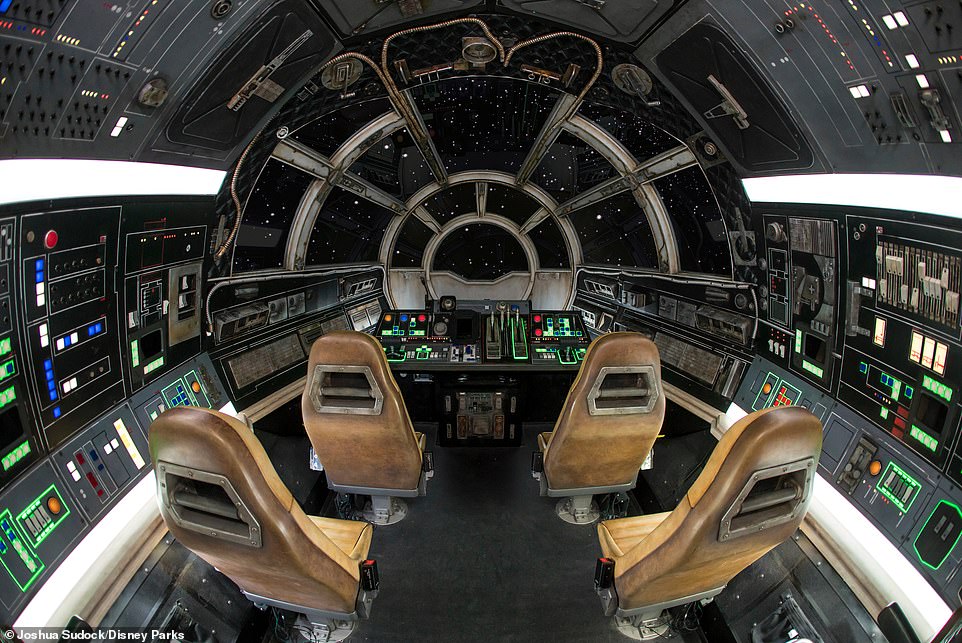 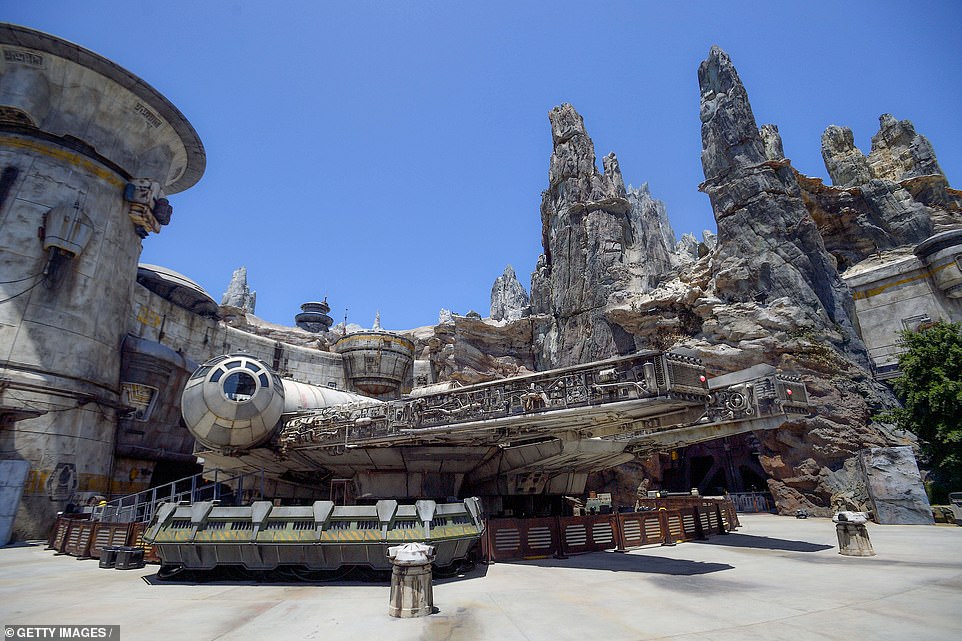 Han Solo’s iconic ship is docked in the middle of the Black Spire Outpost, a hive of villainy on the Outer Rim planet of Batuu 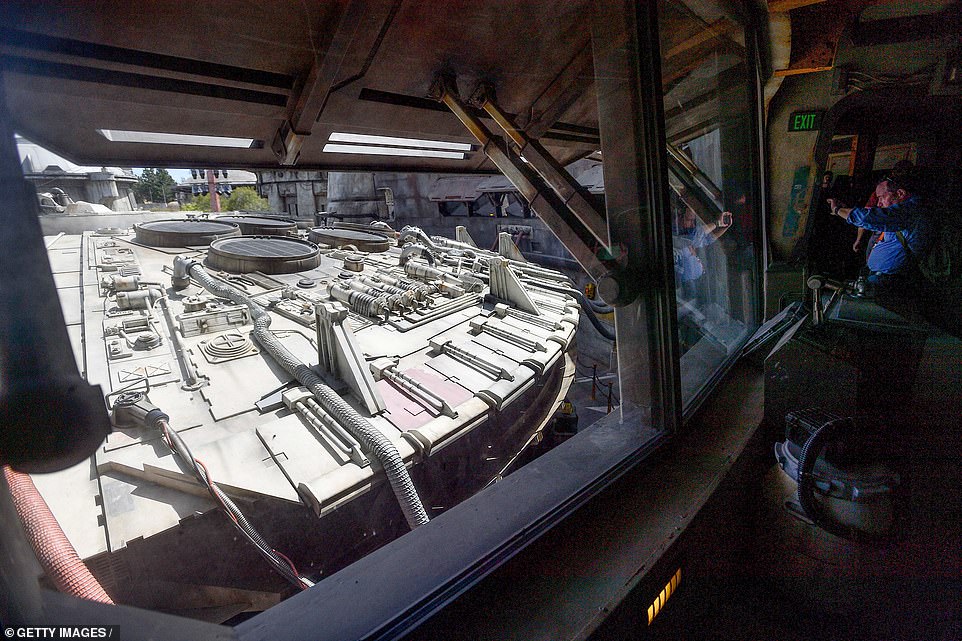 ‘The Force will be with you. Always.’ Theme park visitors get a great view of the legendary ship from the walk up to the Millennium Falcon: Smugglers Run ride 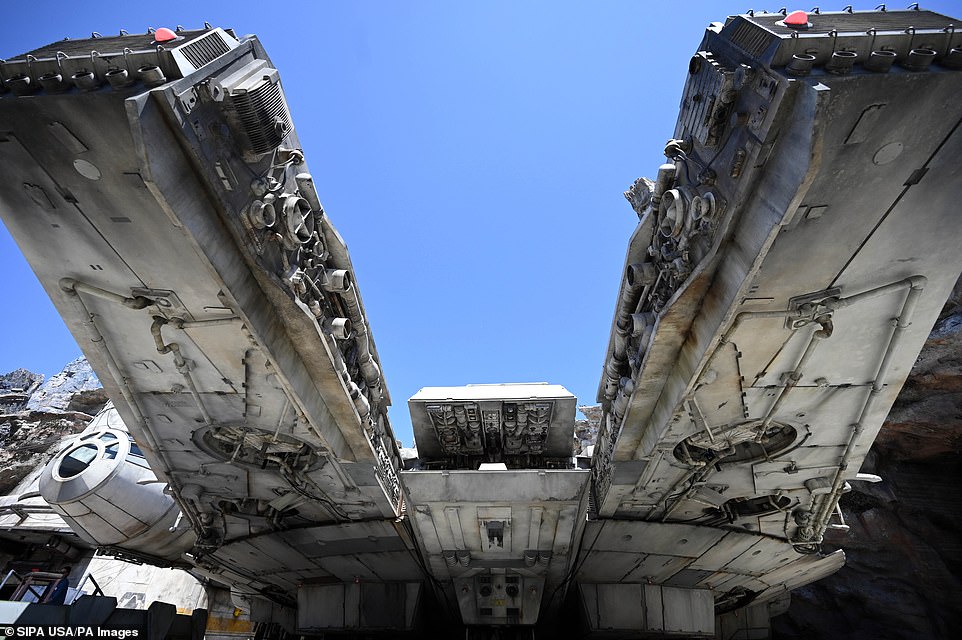 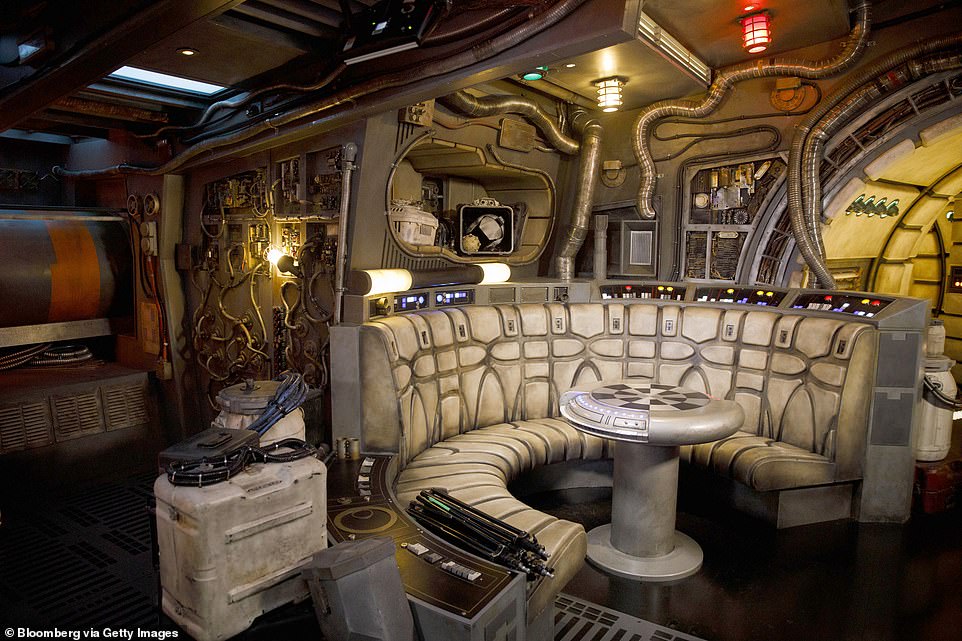 One pilot controls the vertical movement of the faithful-but-flaky Falcon, the other, the horizontal.

The gunners push buttons to fire and engineers flip switches when prompted to fix the spacecraft if the pilots crash it.

How well the team works together to operate the ship determines how bumpy the ride is and if they return to port unscathed or with a few dents in the hull. 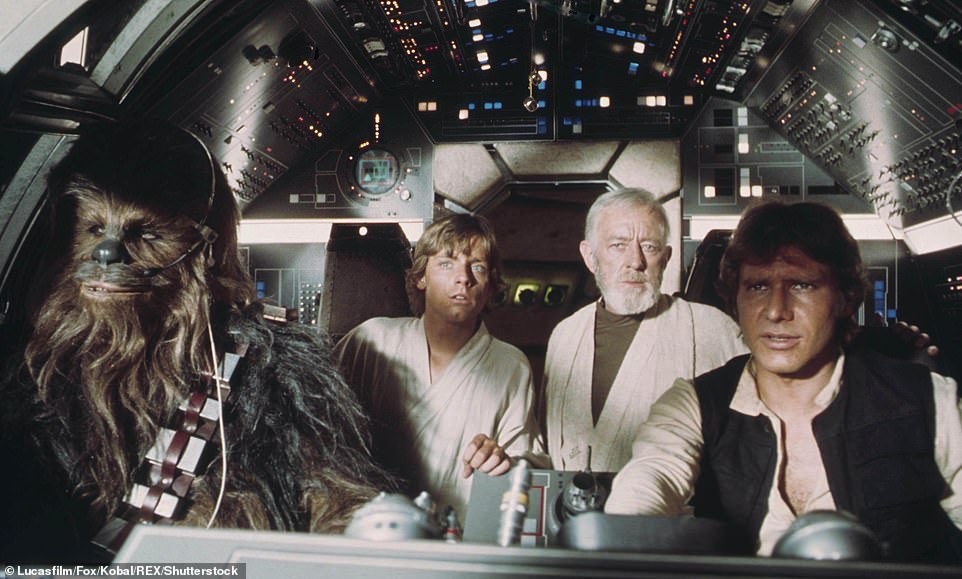 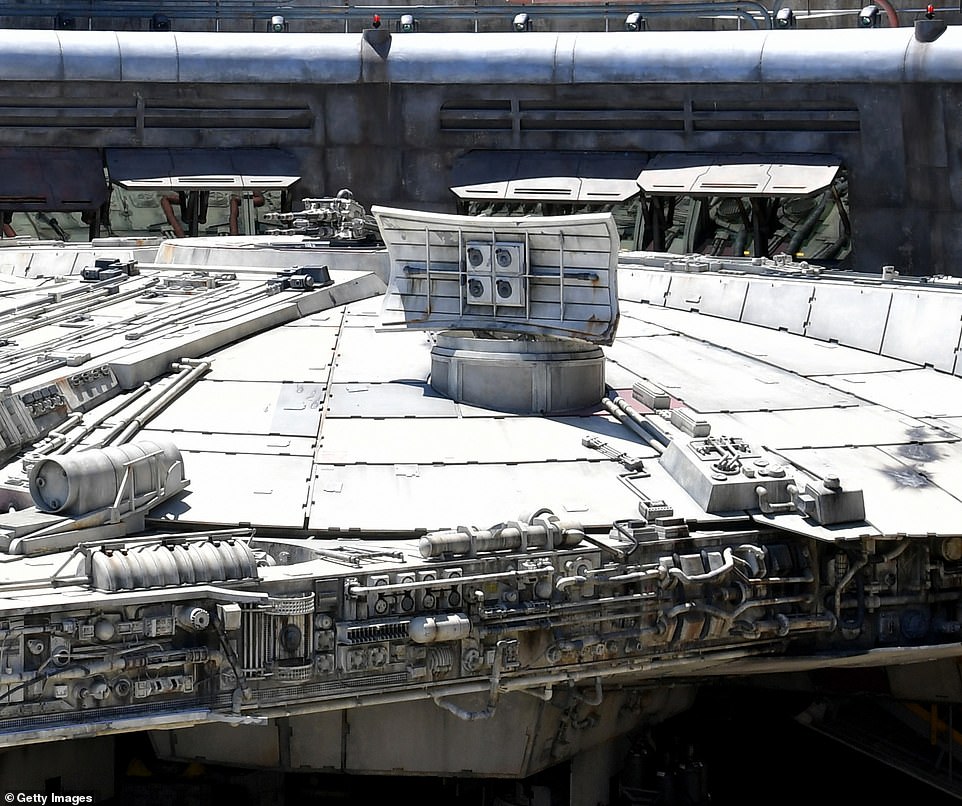 The Disney Imagineers worked closely with Lucasfilm to make sure every detail was accurate, visiting set pieces to get every last pipe, switch and sticker on the exterior hull right 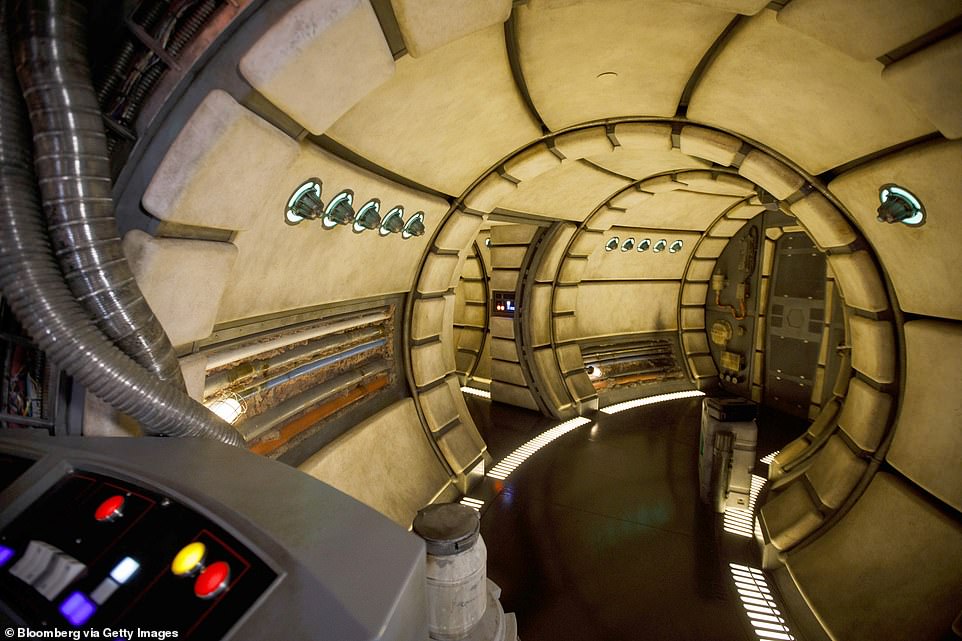 ‘Chewie, we’re home!’ Visitors can walk through the Millennium Falcon’s impressive hull and access tunnel to the cockpit 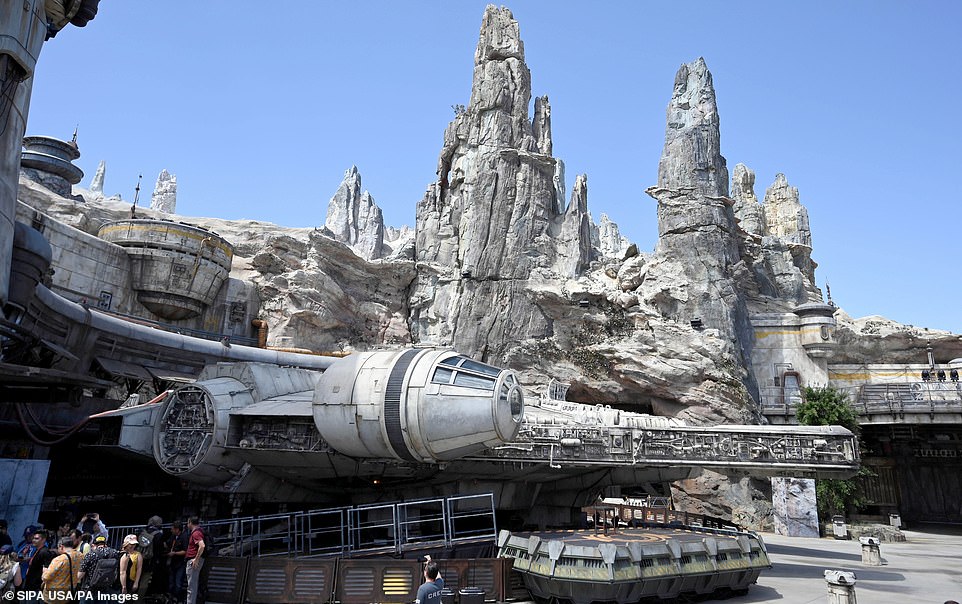 ‘When you can give people an immersive experience which is what Disneyland was designed to be in the first place but something that is as rich as this that heightens the whole experience for people in ways that I don’t think we’re ever imagined when we didn’t have the resources of the technology,’ CEO Bob Iger told CNBC.

‘And so I think more than anything people are going to just be awestruck by how rich the experience here is.’

The Millennium Falcon hurtles through space in the 1983 Star Wars Episode Vi ‘Return of the Jedi’. ‘The Falcon can be unpredictable, with her hyperdrive particularly balky,’ reads a description on the Star Wars website 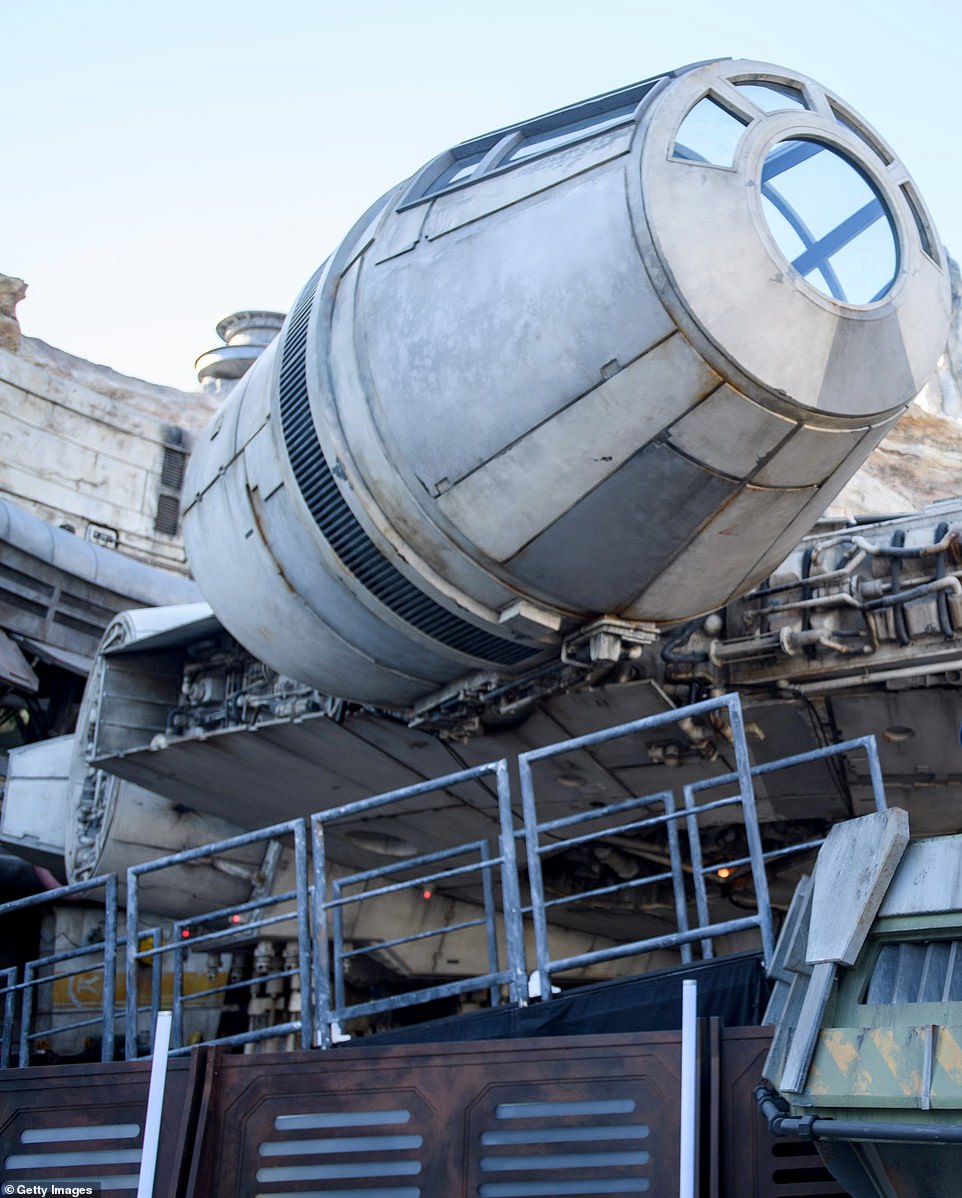 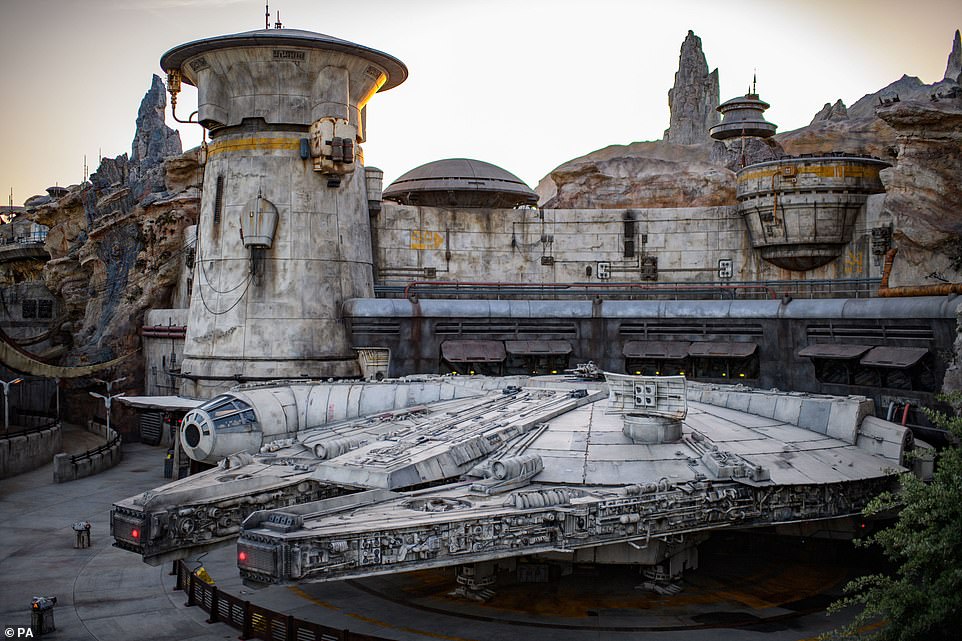 Despite her humble origins, the Millennium Falcon has played a role in some of the greatest victories of the Rebel Alliance and the New Republic 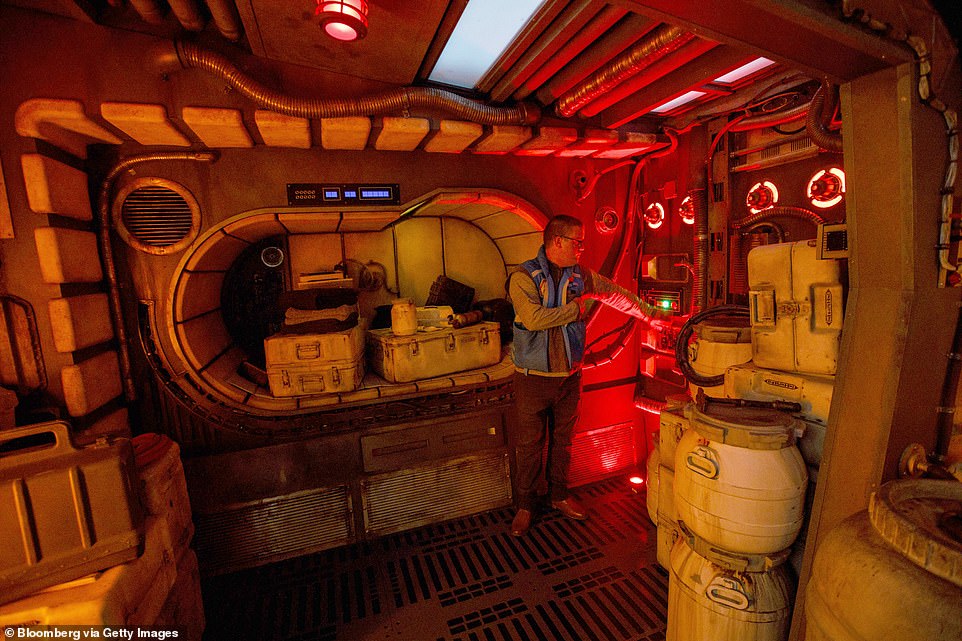 Guests will get their mission after they board the falcon: to acquire a supply of the hyperfuel coaxium from Corellia 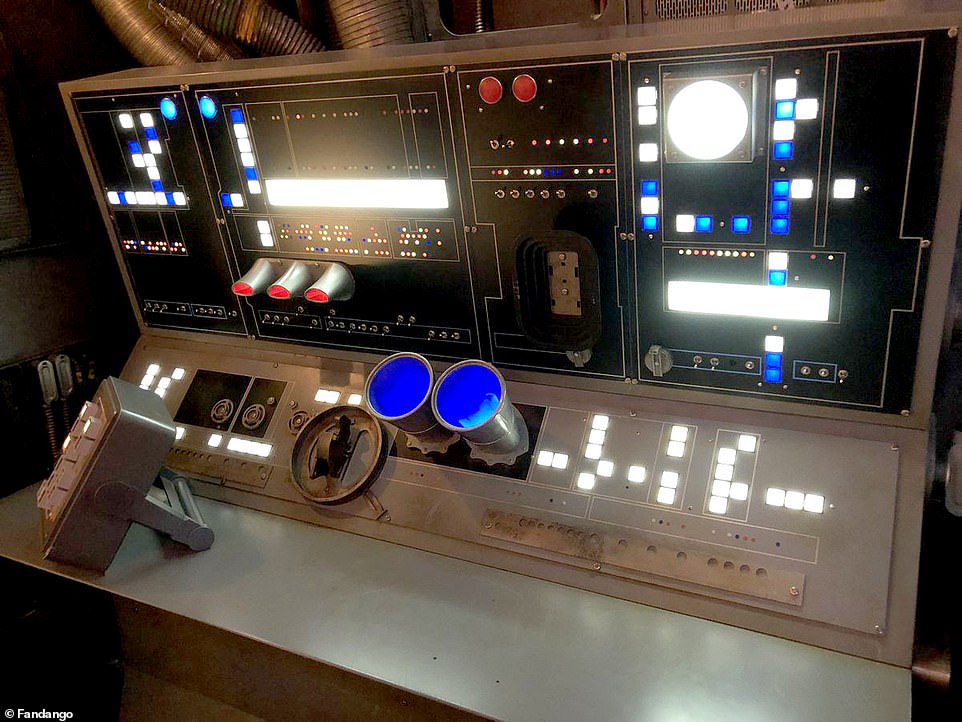 There are also games to play for those queuing to pilot the ship.

Excited fans who got a sneak peak of the park ahead of its opening praised the immersive ride on social media. 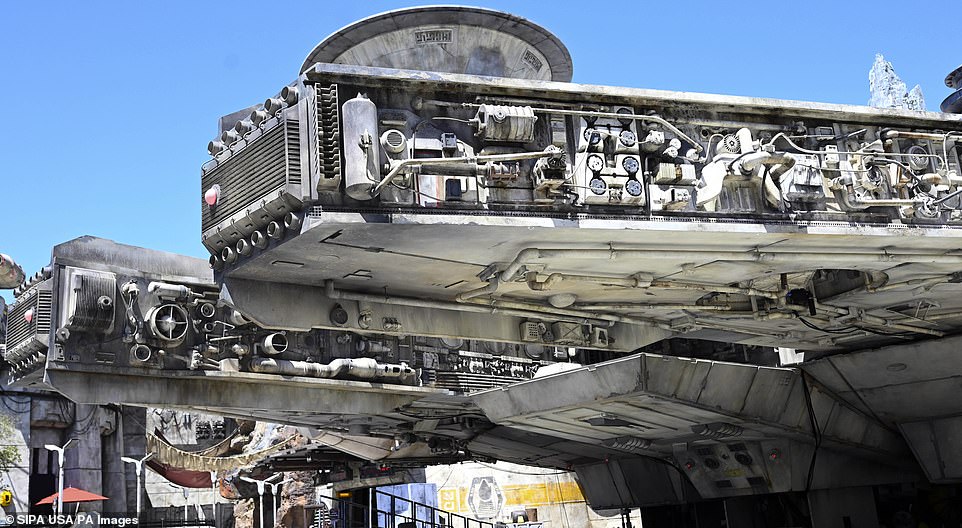 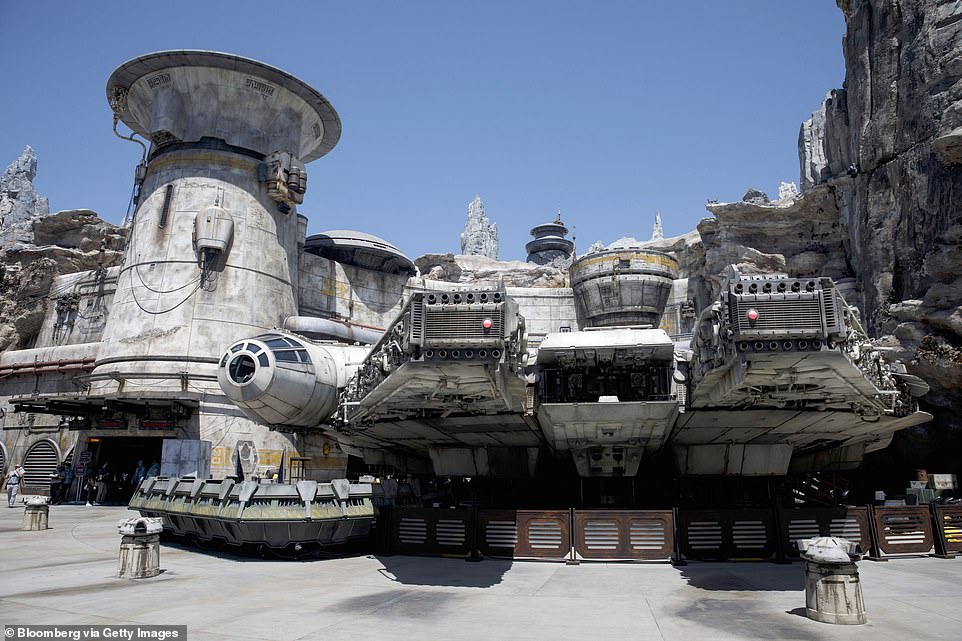 ‘The Falcon looks like a worn-out junker, but beneath her hull she’s full of surprises,’ reads the description on the Star Wars website 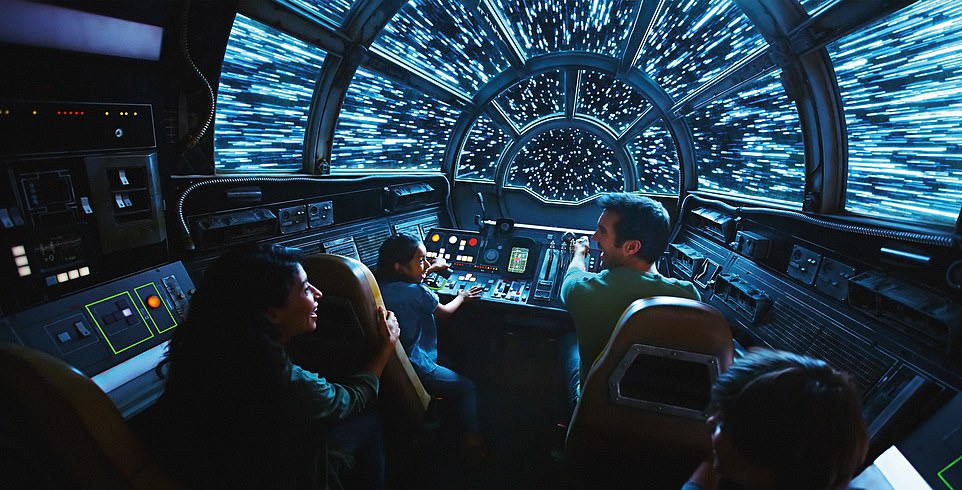 The Disney Imagineers worked closely with Lucasfilm to make sure everything about the Falcon was accurate, visiting set pieces of the Falcon to get every last pipe, switch and sticker on the exterior hull right.

The Millennium Falcon was made famous by Harrison Ford’s Han Solo in the original Star Wars trilogy.

‘Despite her humble origins and shabby exterior, the Millennium Falcon has played a role in some of the greatest victories of the Rebel Alliance and the New Republic. The Falcon looks like a worn-out junker, but beneath her hull she’s full of surprises,’ reads a description on the Star Wars website. 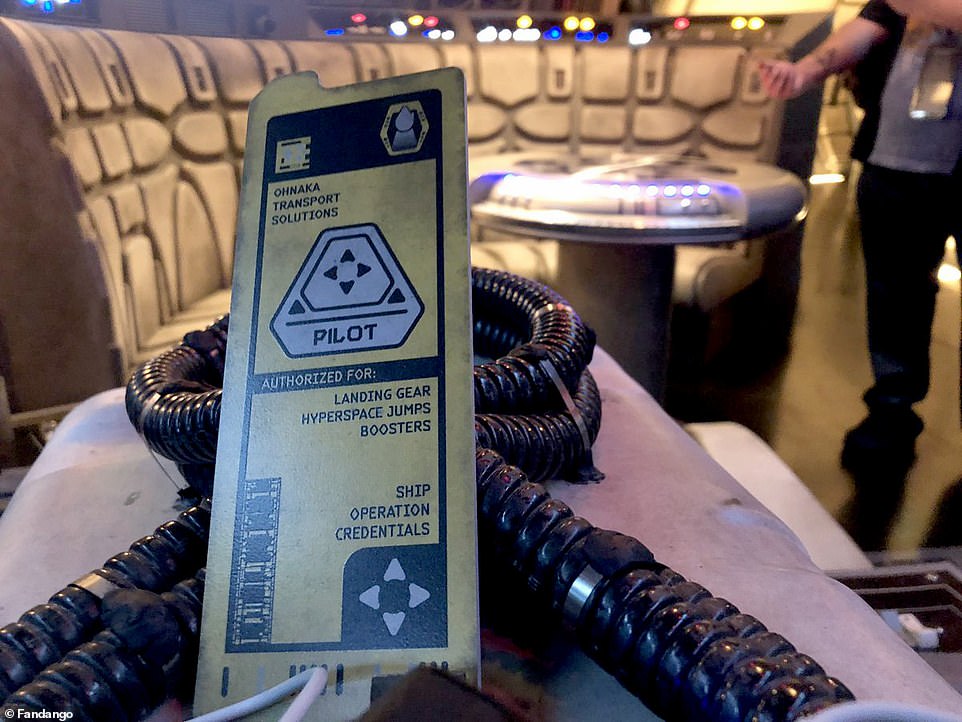 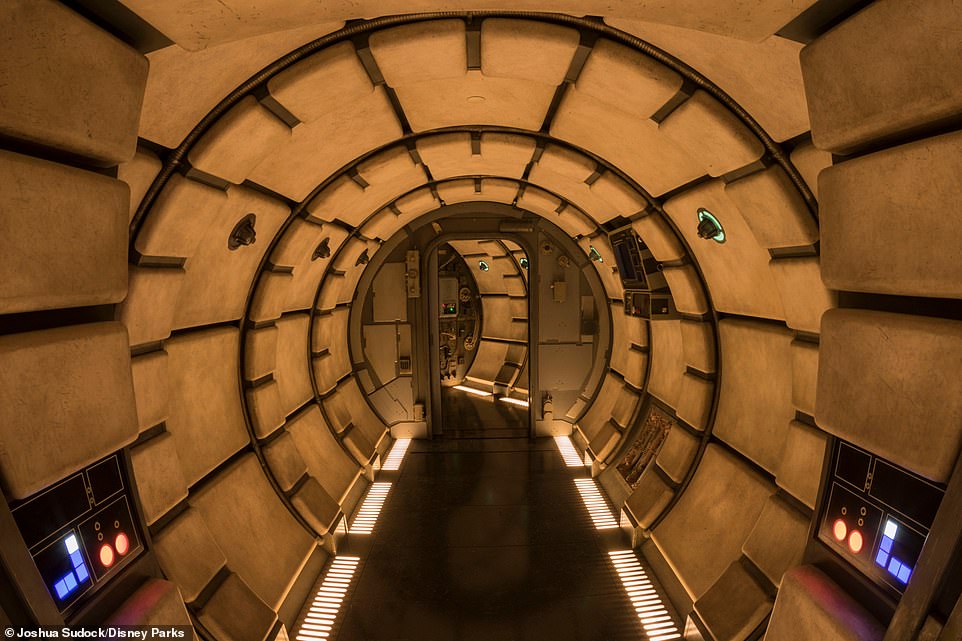 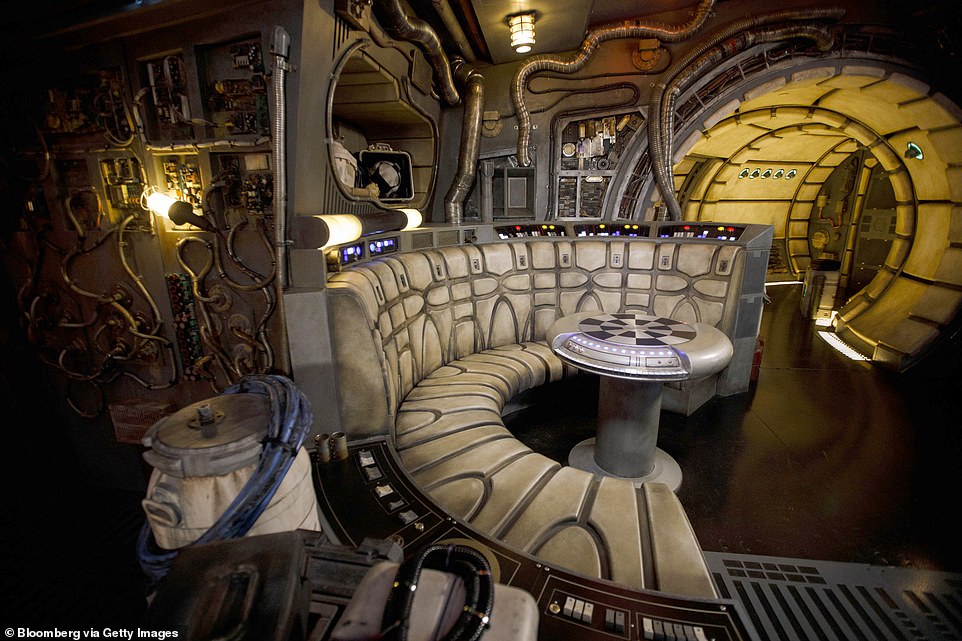 A replica of a Dejarik board, a popular two-player game in the films in which teams of holographic creatures battle each other 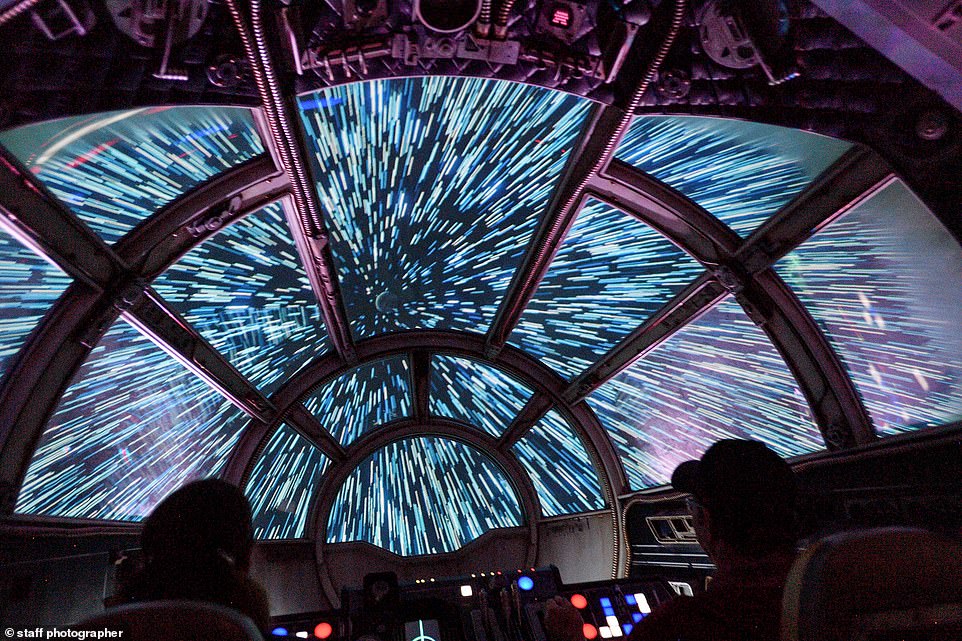 Smugglers Run is the only ride open in the 14-acre park so far, though it also has shops selling personal droids and lightsabers and ‘Star Wars-appropriate food and drink’.

Another ride called Star Wars: Rise of the Resistance is set to open later in the year.

Disney officials said it took more the five years to finish the attraction at the California theme park, with costs estimated at more than $1 billion.

Galaxy’s Edge is an adventure through the grungy planet Batuu, a remote world from the newest Star Wars trilogy, and the war between the Resistance and the evil First Order.

For the first three weeks, guests must have a reservation to enter and will be limited to four hours inside the immersive new land, the largest single-themed land inside a Disney park.

A special wristband will identify a visitor’s time window, and once it expires, Disney said it will shut off access to key attractions and merchandise locations.

Park employees dressed as Star Wars characters will ultimately ask visitors to make their way toward one of the three exits so a new group can enter.

Kris Theiler, vice president of Disneyland park, said: ‘There might be some First Order officers out there helping us or maybe some Stormtroopers asking people to move along.’

‘We’ll employ the First Order maybe later in the reservation period if we need to.’ 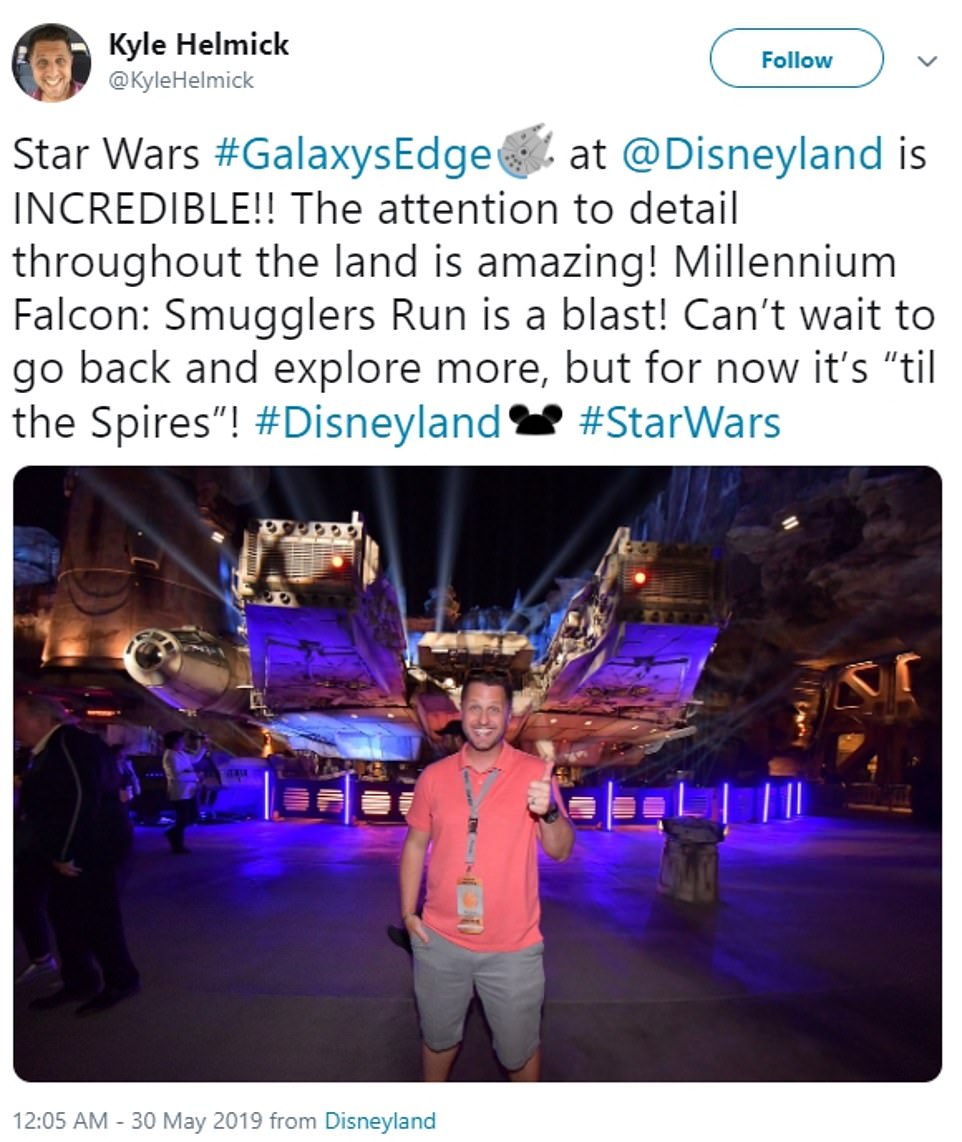 Excited fans posted on social media about their experiences at the Star Wars: Galaxy’s Edge theme park in California 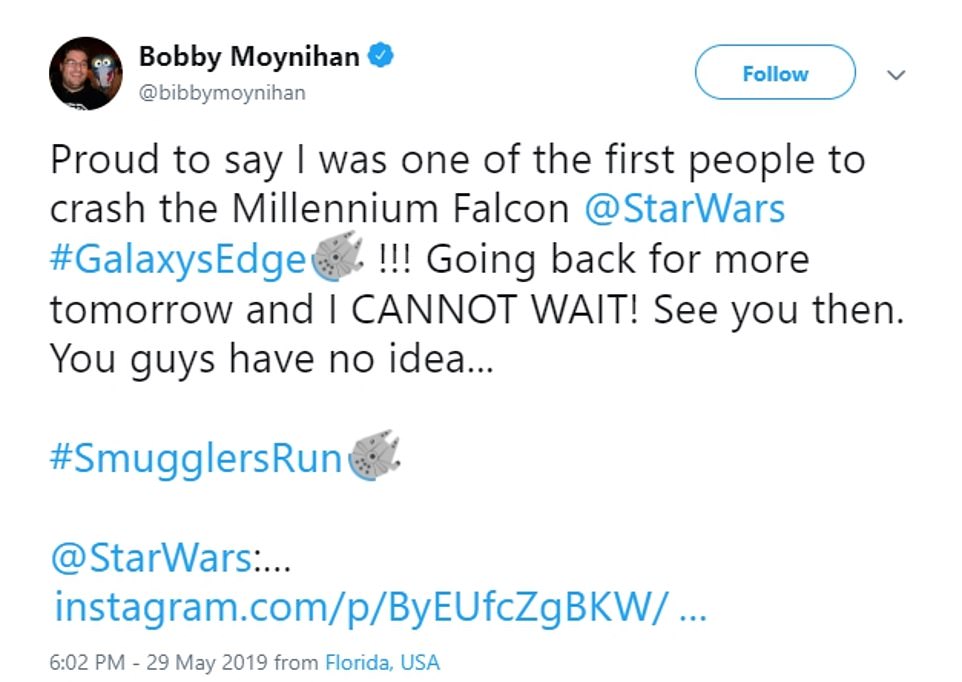 Visitors who got a sneak preview of Millennium Falcon: Smugglers Run joked about how they crashed the faithful-but-flaky ship