Afghan mosque is hit by bomb blast during Friday prayers

More than a dozen people have been killed and dozens more wounded after multiple bomb blasts hit a mosque in southern Afghanistan today.

Three explosions rocked the Fatemieh mosque in Kandahar, the largest Shiite place of worship in the city, during Friday prayers – with witnesses saying one blast hit the main entrance and another hit an area where worshippers wash themselves.

Early official tolls said 16 people were killed and 40 injured, though graphic footage from the scene reviewed by MailOnline suggests the final toll will be higher.

No group has yet claimed responsibility, but it comes a week after an ISIS-K bomb attack on Shiite worshippers in the northern city of Kunduz killed more than 100.

ISIS-K is the terror group’s Afghanistan branch and has stepped up attacks in Afghanistan since the Taliban retook control in August.

The latest attack is significant because it took place in Kandahar, the ancestral homeland of the Taliban.

Many Afghans backed the Taliban retaking control of the country because they believed the Islamist group could bring security and stability.

Shiite Muslims are frequent targets of ISIS, whose followers are Sunni and view the former sect as effectively traitors to the faith.

Interior ministry spokesman Qari Sayed Khosti tweeted: ‘We are saddened to learn that an explosion took place in a mosque of the Shiite brotherhood in the first district of Kandahar city in which a number of our compatriots were martyred and wounded.

‘Special forces of the Islamic Emirate have arrived in the area to determine the nature of the incident and bring the perpetrators to justice.’

According to an AFP journalist the mosque was full of people at the time of the explosions, and at least 15 ambulances went to the scene.

Graphic images posted to social media, which could not be immediately verified, showed bodies lying on the floor of the Fatemieh mosque. 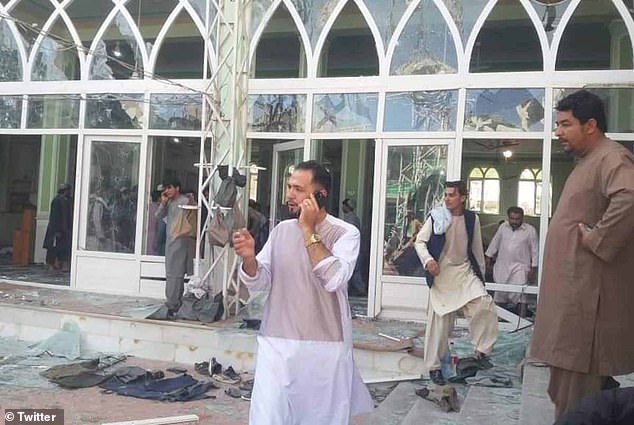 Witnesses said one bomb exploded near the entrance to the mosque, while another exploded in an area where people wash themselves