AFL boss Gillon McLachlan says fans swarming Buddy Franklin when he kicks his 1000th goal ‘would be a good look’ – even though they risk fines of $5,500 for running on the ground

Fans are being warned they face fines up to $5500 if the invade the pitch at Accor Stadium on Saturday night should Hawks and Swans legend Buddy Franklin kick his 1000th goal – but that doesn’t seem to worry AFL boss Gillon McLachlan.

The AFL megastar is closing in on the milestone and needs to kick just five more majors to join the likes of Tony Lockett, Gordon Coventry, Jason Dunstall, Doug Wade and Gary Ablett Sr in the AFL/VFL 1000 goal club.

It is feasible that he could reach the milestone in the season-opener against GWS, but both NSW police and the AFL have warned fans that rushing the ground would result in heavy penalties.

Someone must have forgotten to pass on the memo to Gil McLachlan, though, who told Fox Footy’s AFL 360 that it ‘wouldn’t be the worst’ if AFL fans flooded the field to congratulate Buddy when he reaches the milestone.

‘Well, officially, you shouldn’t run on the ground, but … it would be a good look, wouldn’t it?’ he said.

‘Exactly [be good], leave [the players] alone. I can’t endorse it, but it wouldn’t be the worst. 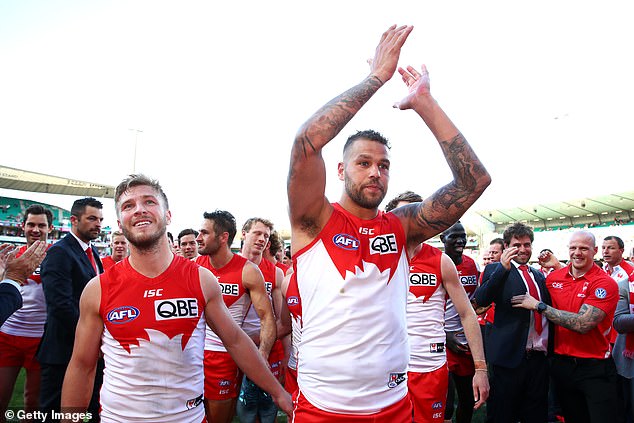 McLachlan said it might be a moot point anyway, because Buddy might not kick five majors against GWS.

Jordan Lewis is a good friend and former teammate of Franklin’s. They are both premiership winners with Hawthorn and Lewis remembered the day Buddy kicked his 100th goal for the season and fans flooded the ground to celebrate mid-game in 2008.

‘The major point for us is at no stage did you feel like your safety was an issue. Fans usually come onto the ground to interact with us but they were thinking, ‘How good is this?’ he told the Herald Sun. 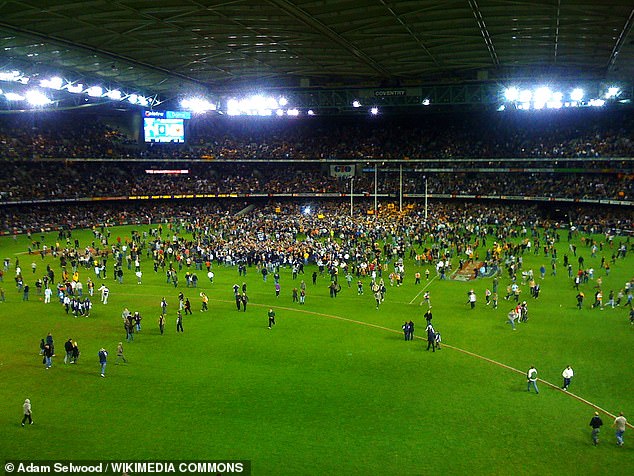 Players run onto the pitch to celebrate when Buddy Franklin kicked his 100th goal in a season for Hawthorn back in 2008.

‘They weren’t there to threaten players. From a player point of view it was a safe environment and for the people it was something they will probably tell their grandkids about.

‘It was pretty chaotic to get Buddy off the ground and down into the race, but I remember there was footage of (teammate) Robbie Campbell taking photos with people and signing autographs. We said, ‘Robbie, we have still got a game to play’.

‘But it’s one of those things you have to accept and it was actually quite joyous.’