Richmond captain Trent Cotchin’s sick young daughter begged him to stay with his team for a critical game instead of come home to Melbourne for her.

The Tigers star, 31, is training with his teammates in Sydney and is scheduled to fly to Perth ahead of Saturday night’s match against Essendon.

His wife Brooke on Tuesday shared a photo of one of the couple’s daughters in a hospital bed on Instagram along with the caption ‘when it rains it pours’.

Cotchin faced an agonising dilemma on whether to stay in the team hub and play, or go home to locked-down Melbourne and be stuck there for weeks.

Richmond on Wednesday said Cotchin was closely monitoring the situation but for now was remaining in the hub.

‘Trent’s ill daughter is probably the only reason why he is still there,’ Brooke Cotchin posted on Instagram on Wednesday.

‘She is the one telling him that she wants him to play on Saturday night.’

However, Brooke said she too was in favour of him staying on after copping abuse from angry Richmond fans and was afraid of getting even more.

‘I have begged my husband not to come home not because I don’t need him right now but because I would be scared of the abuse I would have to deal with [from fans],’ she wrote.

‘I want him to do what is best for the Richmond Football Club and his teammates and I know that is not coming home right now.’

Ms Cotchin said the only reason she posted a picture of her sick daughter in hospital was because she was scared people would accuse her of breaching Covid restrictions if her other children were spotted with their grandparents. 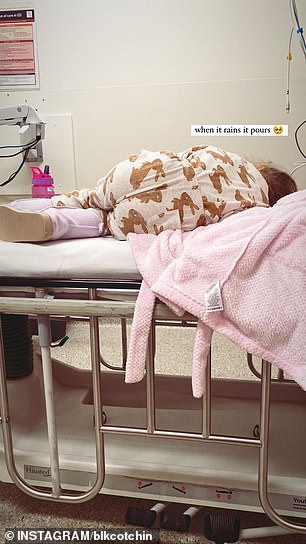 ‘I posted on social media because I was scared that people would see my other 2 children with our family who are caring for them whilst I am by my very ill daughters (sic) side in hospital,’ she wrote.

‘I posted it because I was worried people would accuse me of not living by covid lockdown rules because my husband is away and it is impossible for me to do it on my own.

‘I am doing my very best just like everyone else is right now.’

Returning home ran the risk of Cotchin not only missing this weekend’s game but perhaps more thereafter, as states adjust their restrictions on people travelling from Covid-stricken Melbourne.

‘Richmond acknowledges interest in captain Trent Cotchin’s availability ahead of this Saturday’s Dreamtime game,’ the club said in a statement.

‘Cotchin remains a part of the football program in Sydney, and is monitoring a personal matter at home in Victoria.’

Brooke and Trent Cotchin have three children together, girls Mackenzie and Harper and son Parker.

Which daughter has been admitted to hospital is not clear.

Tigers football manager Neil Balme said the club would be entirely supportive if he elected to return home to be with his daughter. 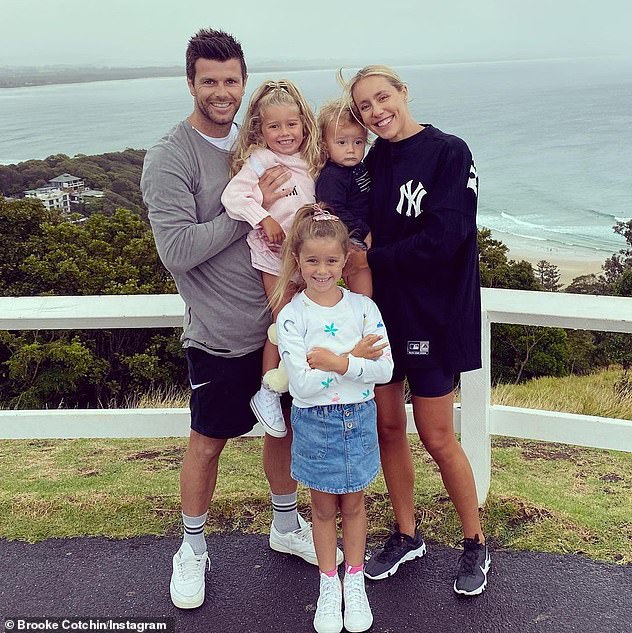 ‘We love them playing, but there are other things in life that they have to take into account, and whatever they do, we will support them,’ Balme said.

This weekend’s game against Essendon was a critical one for the defending premiers, as they sit in a precarious eighth on the ladder and a loss would seen them leapfrogged by the Bombers.

Cotchin has previously said he would consider staying behind in Victoria to be with his family if Richmond were made to play their games outside of the state due to Covid-19 restrictions.

His wife was last year attacked online after breaking hub protocols to visit a day spa for a facial in July then posting about it on Instagram.

Her family was among hundreds of players and staff moved from Melbourne to the AFL hub in Queensland after Victoria experienced a rise in Covid-19 cases before the Grand Final.

She said if it was not for her kids she would have killed herself after being overwhelmed by life in the footy hub which was set up to ensure the footy season could continue by separating players and staff from the public. 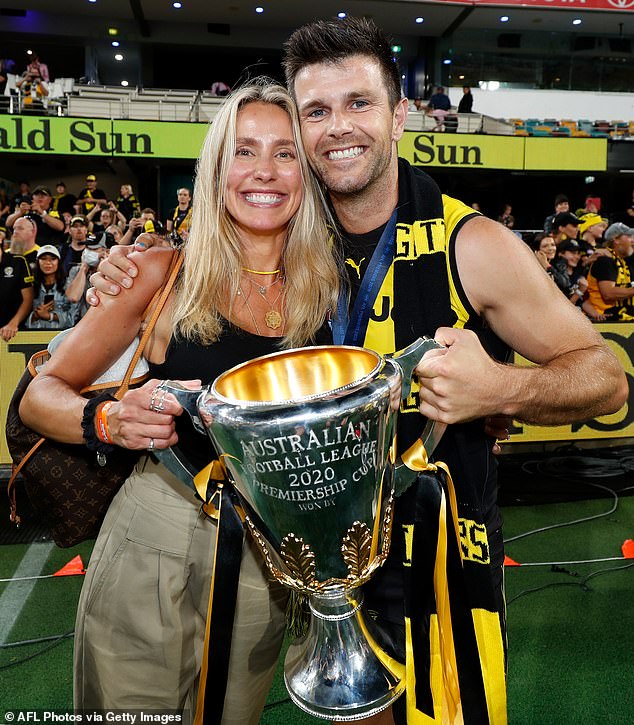 Trent and Brooke Cotchin celebrate Richmond’s 2020 AFL Grand Final victory. Richmond on Wednesday said Cotchin was closely following a family matter but had not yet returned to Victoria

Mrs Cotchin admitted she could not resist reading the abuse sent to her Instagram account by members of the public despite it dramatically affecting her.

‘Everyone was like ‘don’t read it’. But I’m one of those people that I just need to know and I need to have control over what’s being said. 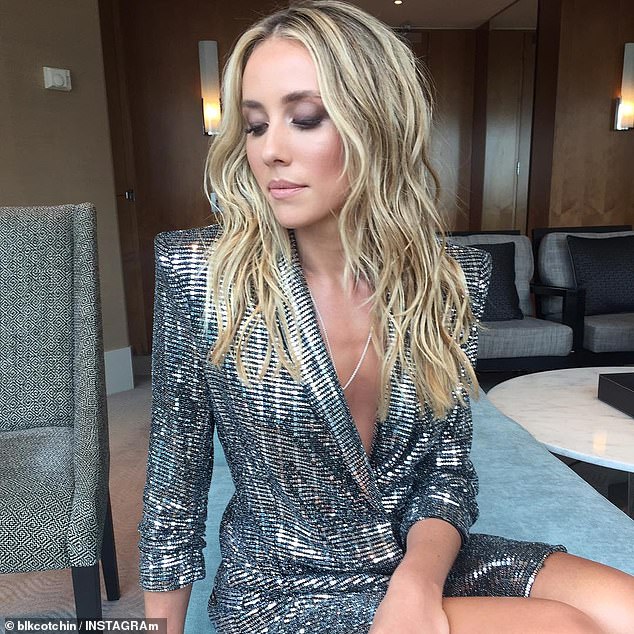 Brooke Cotchin, wife of Richmond Tigers captain Trent Cotchin, has previously revealed she could not resist reading abusive messages on Instagram after she breached Covid hub restrictions – and it drove her to the brink of suicide

‘It sounds stupid because I was so mentally depressed because of messages people were sending me,’ she said.

‘I suppose you get painted as this person that you’re not. You’ve got no control so you just have to deal with it.’