The Herald Sun reports that Sarah is ‘understood to be four months pregnant’ and will debut her baby bump on the red carpet at the Brownlow medal count on Monday night.

Roughead was sidelined indefinitely when diagnosed with a melanoma in May 2016 after a return of the cancer which first appeared on his lip in 2015.

The 30-year-old had the initial melanoma removed from his lip, and his football career was put on hold indefinitely when the four melanoma lumps were discovered on his lung, and confirmed by a biopsy.

A routine body scan detected ‘a few spots of cancer’ which then required further medical treatment pending the outcome of a further biopsy. 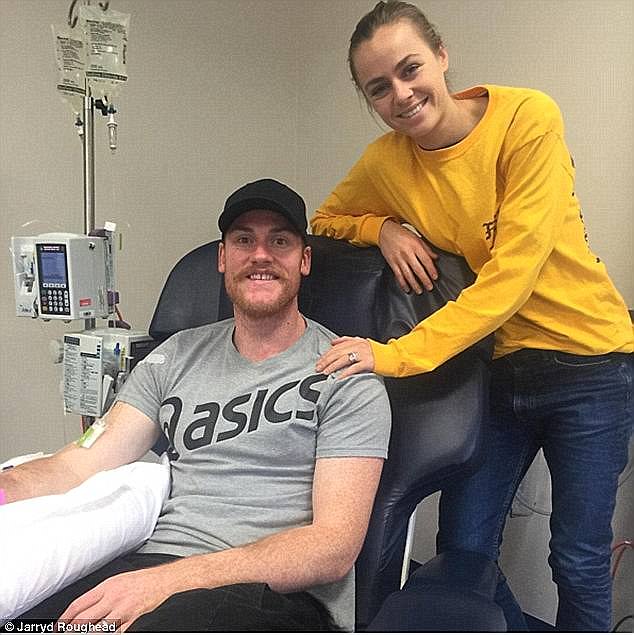 Tough times: Roughead was sidelined indefinitely when diagnosed with a melanoma in May 2016 after a return of the cancer which first appeared on his lip in 2015

But he declared himself ‘cancer free’ in December, and said he would return to play with Hawthorn in 2017.

‘I’ve had a complete response from the treatment so far and [the doctor has] given me the all clear. Things are all good and we can get back to normal life,’ Roughead said at the time.

But he said he is most excited to be there for his family, after gaining the perspective through his diagnosis that ‘footy is not everything’.

The popular player was named captain of the Hawks for the 2017 season in January.

Roughead has took the top job at the AFL club after last season’s captain Luke Hodge stepped down from the role.

‘I’m honoured to be captaining the Hawks this year,’ Roughead said in a statement at the time.