The former Melbourne player was searching on Gumtree for Staffordshire bull terrier puppies for his children when a Google ad popped up on the page for a breeder’s website.

He warned other families not to fall from the same scam, saying everything seemed fine until the seller suddenly stopped responding to messages and calls.

Despite raising his concerns with police, the website is still up and puppies are still advertised for sale.  ‘

The website appeared to be a reputable breeder with guarantees and testimonials and then I had several email exchanges with a woman named Sarah Laudin who claimed to be from Tasmania saying the puppy was the last in its litter,’ he told the Herald Sun.

But after making the ‘irrational’  and ’emotional decision’ to fork out $2,850 for a puppy, the ‘breeder’ became elusive and dropped out of contact.

Former AFL star Andrew Leoncelli  (pictured) lost $2,850 to an online puppy scam while trying to purchase a pet for his kids

He now believes he was the target of a highly sophisticated overseas crime syndicate.

‘My children were tugging at the heartstrings and my partner really wanted the puppy, but the next day after the money had cleared they were being elusive and refused to answer my calls,’ he said.

The couple became suspicious and decided to make inquiries about the breeder.

But when they started asking more questions, the breeder’s name suddenly changed to ‘Nick Isler’.

Mr Leoncelli said his partner called Isler, who then tried to sell the couple another puppy over the phone. 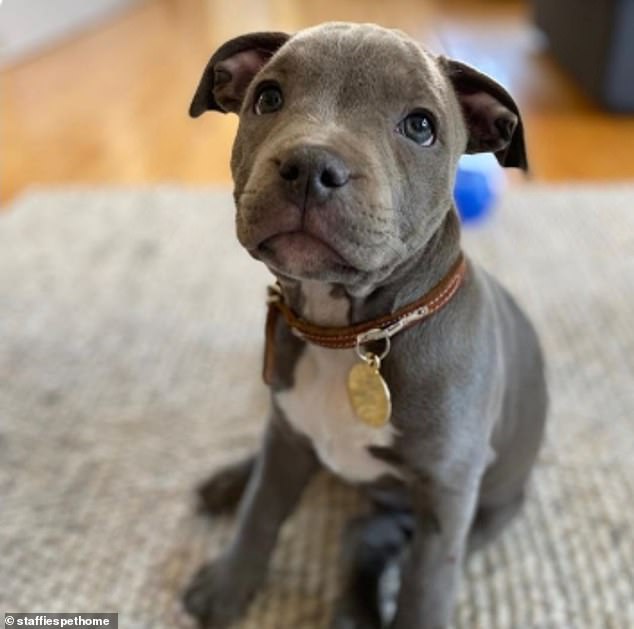 Once Mr Leoncelli had paid for the puppy,  the ‘breeder’ became elusive and dropped out of contact (pictured, the puppy he was offered) 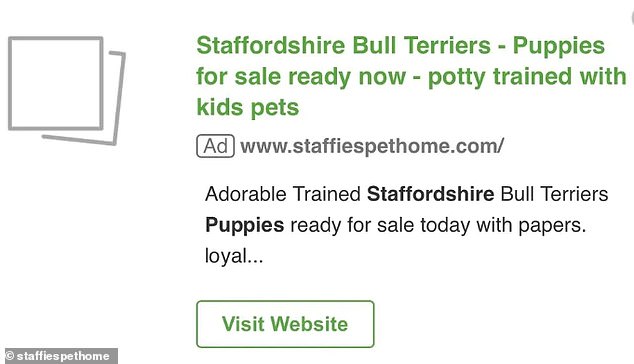 When she asked about the dog they had initially inquired about, the man changed tactics- insisting that was the same puppy he was trying to sell her.

Mr Leoncelli said the man over the phone had a heavy African accent and had been very pushy to sell the dog.

The ex-sportsman, who is now the managing director of real estate company CBRE, said the scam had left his family devastated and wants authorities to take action.

He is now calling for the search engine companies, Google and Gumtree, to be held accountable for allowing scammers to post ads on their sites.

He also said banks need to boost their consumer safety measures after ‘Sarah Laudin’s  account, to which he transferred the funds, were with Commonwealth.

‘There are not enough protections for the average consumer. This has to stop and these businesses need to take responsibility for allowing their ads,’ Mr Leoncelli said. 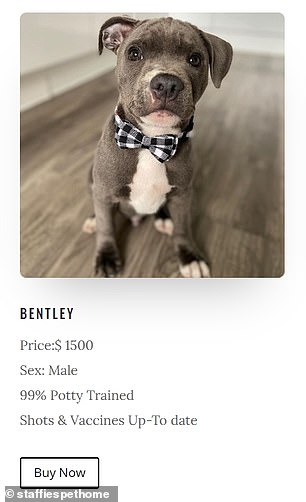 The fake website (pictured) features a variety of puppy profiles, touting the pets as ’99 per cent potty trained’

‘It is understood a victim believed they bought a Staffordshire bull terrier puppy from a website and made a substantial deposit payment,’ she said.

‘Once they paid the deposit the online business ceased all contact, leaving the victims without a puppy or their money back.’

‘The investigation remains ongoing and police urge anyone with information in relation to the scam to come forward.’

A Commonwealth Bank Australia spokesperson told Daily Mail Australia the security of their customers’ banking details is a top priority.

‘We invest in state of the art fraud prevention and detection technology and have a dedicated team who actively monitor unusual or suspicious activity,’ she said.

‘Another way we try to keep ahead of the curve is working closely with law enforcement agencies and other banks to share information and understand potential threats.’

In May, the Australian Competition and Consumer Commission warned lonely Australians seeking pets to keep them company during the pandemic to be cautious of their online purchases after $300,000 had been lost to puppy scams.