These images show the very first black soldiers that signed up to the Union Army during the American Civil War.

The brave men that stepped forward, did this despite the Confederate army promising death if they were captured – and even prejudices from their own side, such as unequal pay.

The enlistment of black troops, most commanded by white officers, was made possible by Abraham Lincoln’s Emancipation Proclamation made on New Year’s Day, 1863.

The Bureau of Colored Troops opened in May that year to facilitate the recruitment of African-American soldiers, as well as Native Americans and Asian Americans.

They became known as the United States Colored Troops (USCT) and approximately 175 regiments comprising of more than 180,000 free black men, of whom 7122 were officers, served during the last two years of the war. 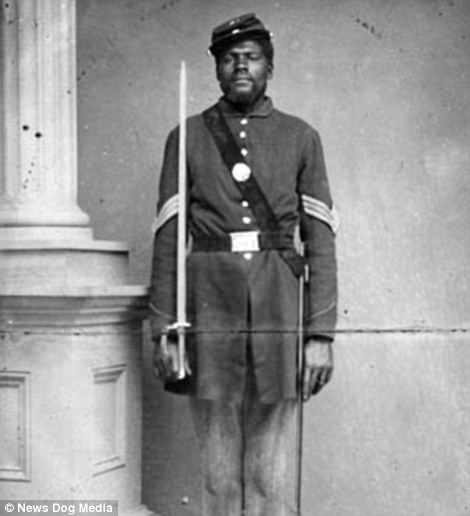 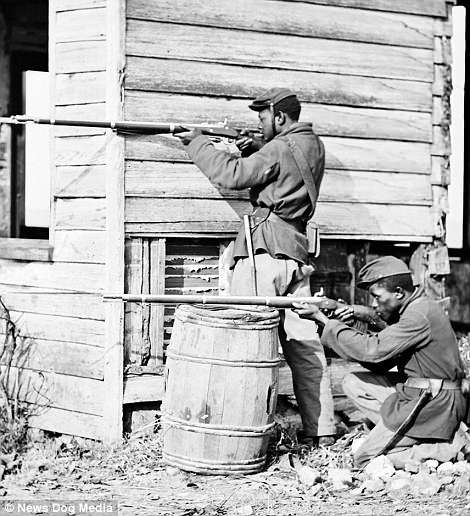 Sergeant Henry F. Steward (left) of 54th Massachusetts Infantry Regiment and took part in the Battle of Fort Wagner in 1863. He died two months after the battle in from wounds. Pictured right are soldiers of the United States Colored Troops firing their weapons from a farmhouse during fighting at Dutch Gap, Virginia, 1864 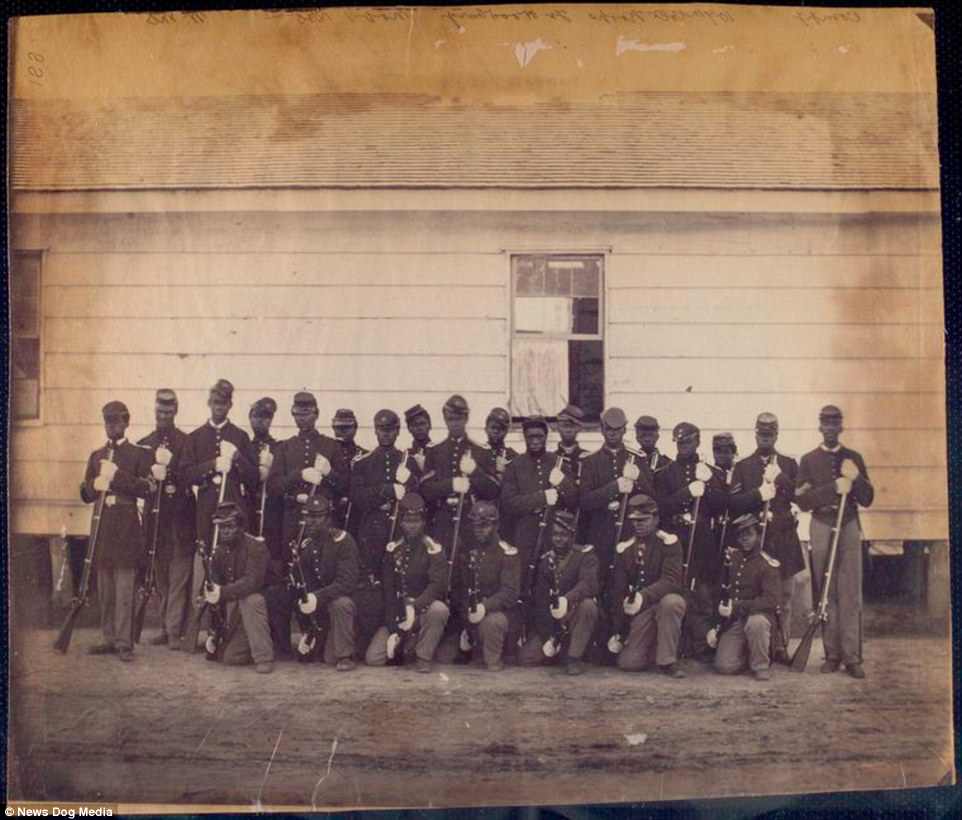 An unknown regiment of the United States Colored Troops. The enlistment of African American troops was made possible by Abraham Lincoln’s Emancipation Proclamation made on New Year’s Day, 1863. They were mostly commanded by white officers though some were commissioned 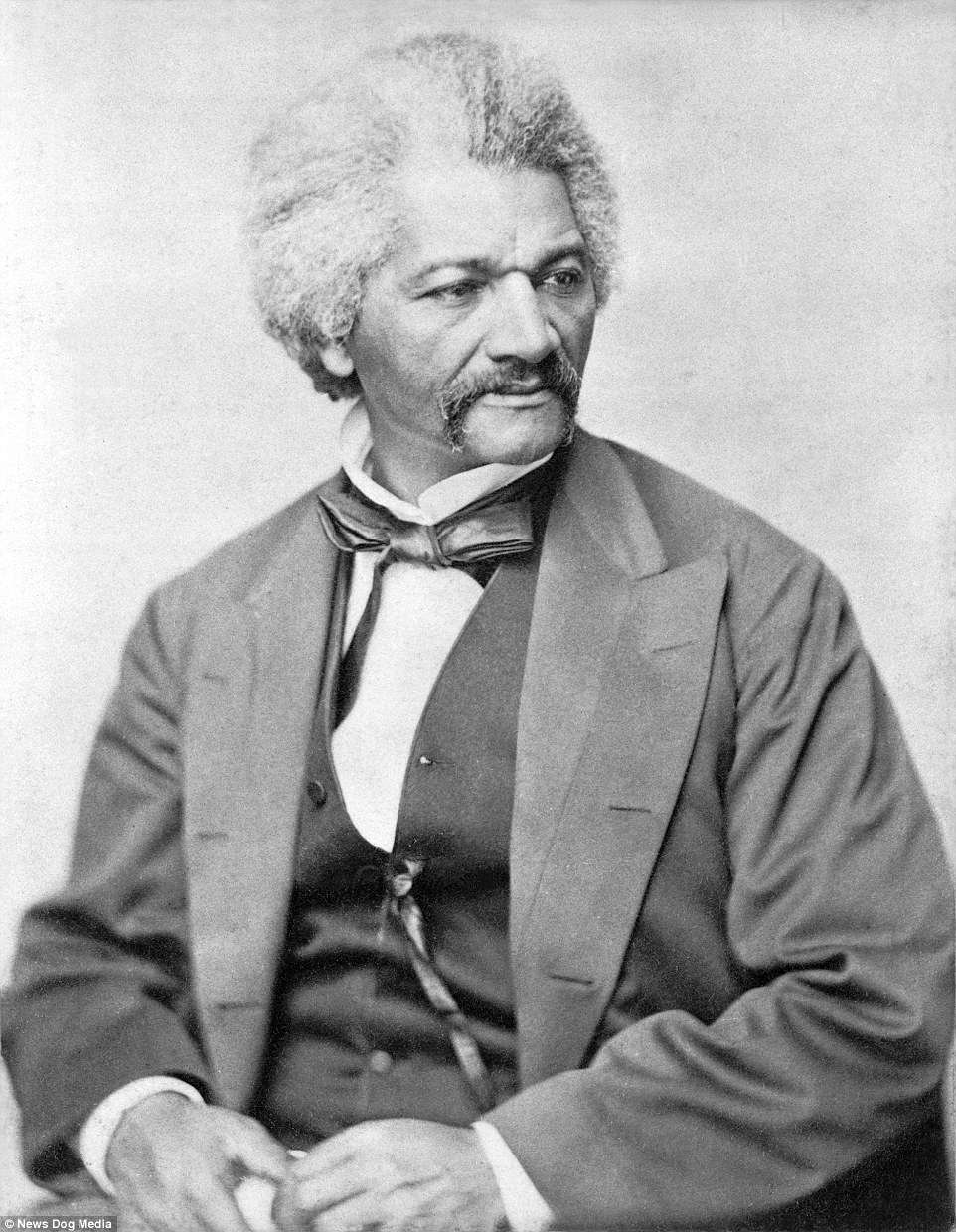 Abolitionist Frederick Douglass. He encouraged his sons to sign up the U.S. Army’s first ever black regiment as he viewed it as an opportunity for blacks to establish themselves as whites. As a result of his exhortations, black volunteers began to come forward in large numbers

The very first unit was the 54th Massachusetts Infantry Regiment, and contained the sons of some of America’s most famous abolitionists – including two sons of Frederick Douglass, the most photographed American of the 19th century.

Despite signing up to fight against the Southern rebellion and to end slavery, the troops had to suffer the injustice of unequal pay. The U.S. Army paid black soldiers $10 a week, whilst white soldiers got $3 more.

To protest against this insult, the entire regiment refused to accept their wages, including the officers – who were all white men.

The unit saw extensive service whilst serving in the Union Army, including a bloody battle at Fort Wagner where 600 of them went up against 1,700 Confederates. 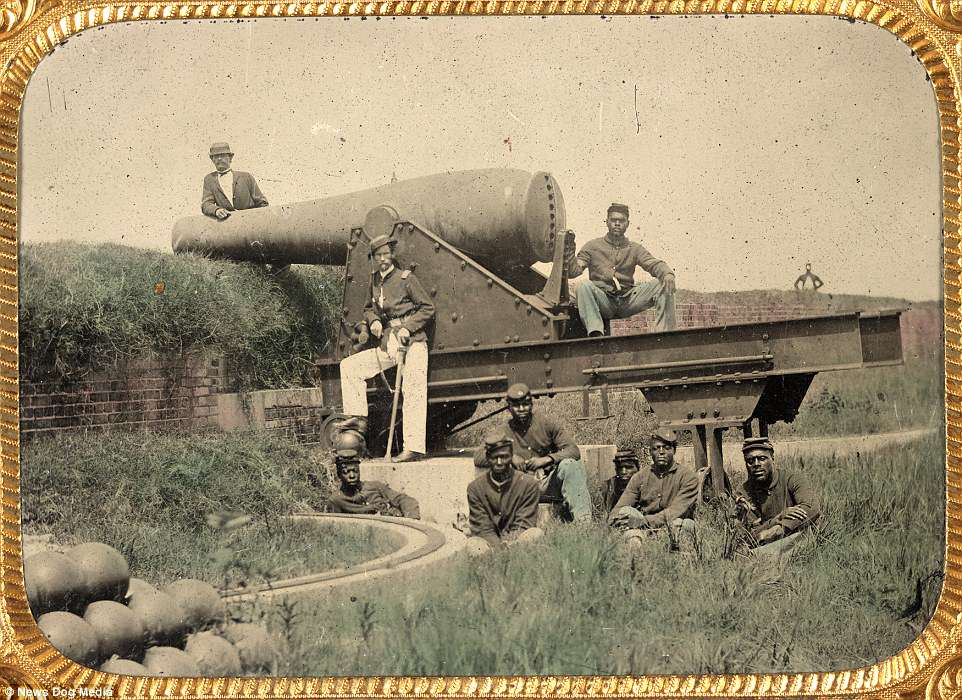 Troops from the 54th Massachusetts Infantry Regiment posing with a 10″ Rodman cannon at Fort Massachusetts. The 54th was the first African-American unit organized by the United States government and saw extensive service in the Civil War 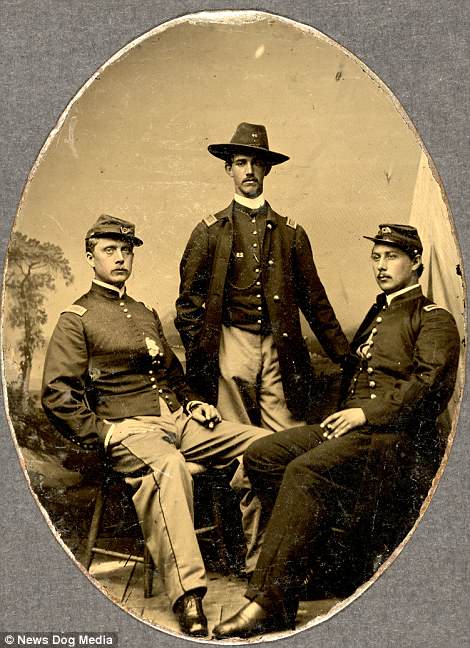 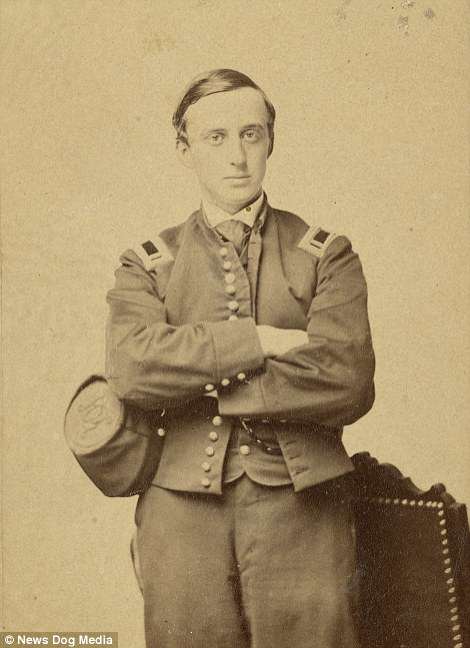 A group of the white officers who commanded the 54th Massachusetts Infantry Regiment (left). Captain Cabot J. Russell  of the regiment is pictured right one month before he died at Fort Wanger alongside black troops. He enlisted as private in the 44th Massachusetts Regiment before rising through the ranks and transferring to the 54th 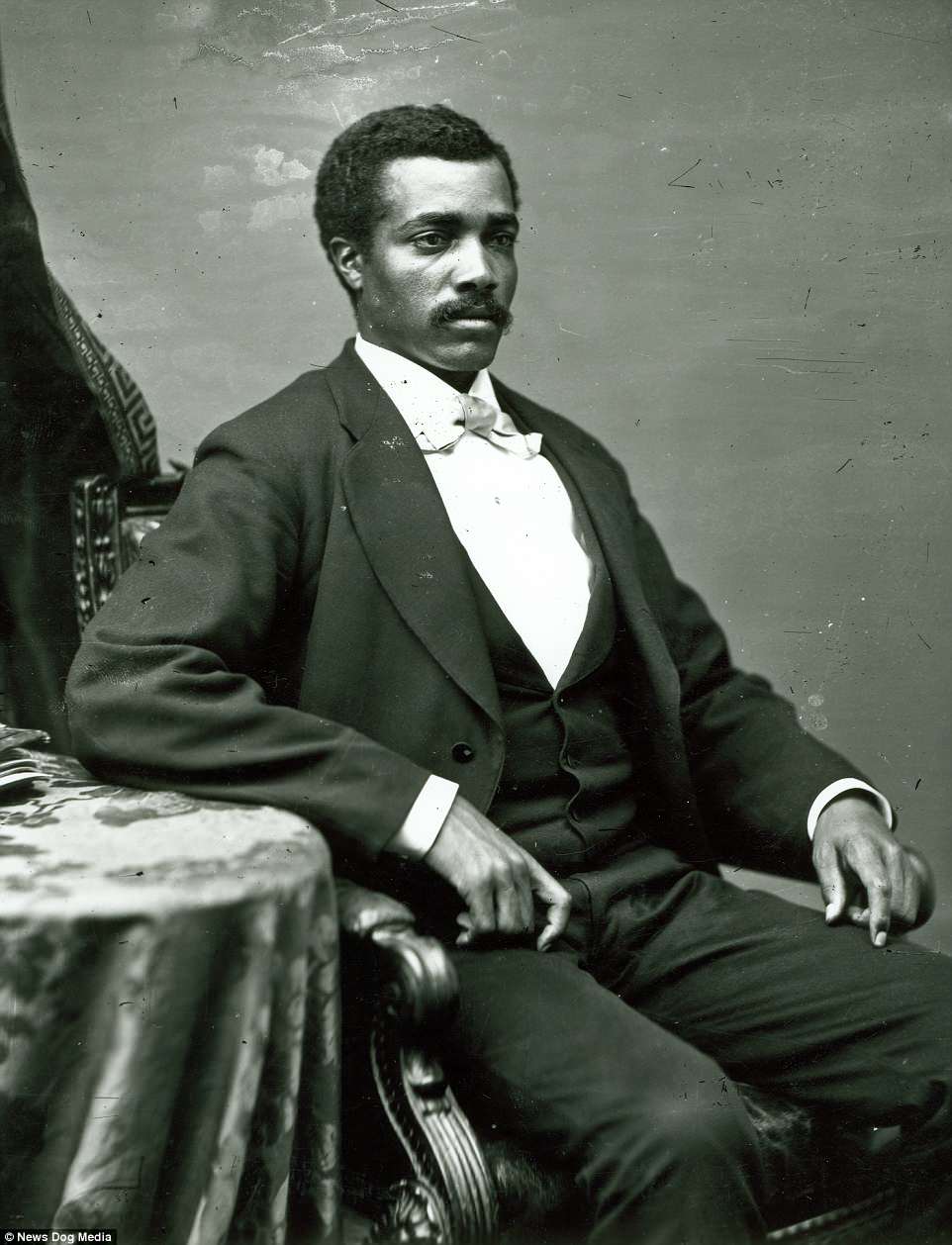 Josiah Thomas Walls (pictured) served as a United States Congressman from 1871 until 1876. Walls was born a slave near Winchester, Virginia. He was forced to join the Confederate Army and was captured by the Union Army in 1862 at Yorktown. He volunteered for the United States Colored Troops in 1863 and rose to the rank of corporal 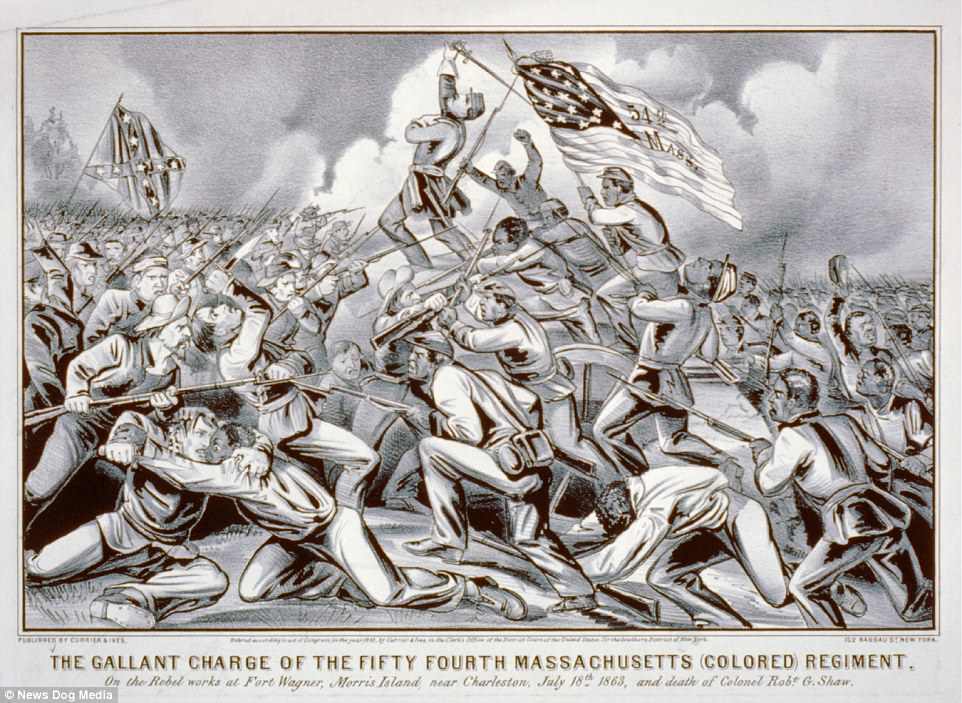 A depiction of the charge of the 54th Massachusetts at the battle of Fort Wagner. In all, about 1,515 Union soldiers were killed, captured, or wounded in the ultimately unsuccessful assault on the fort which protected Morris Island, south of Charleston Harbor, South Carolina 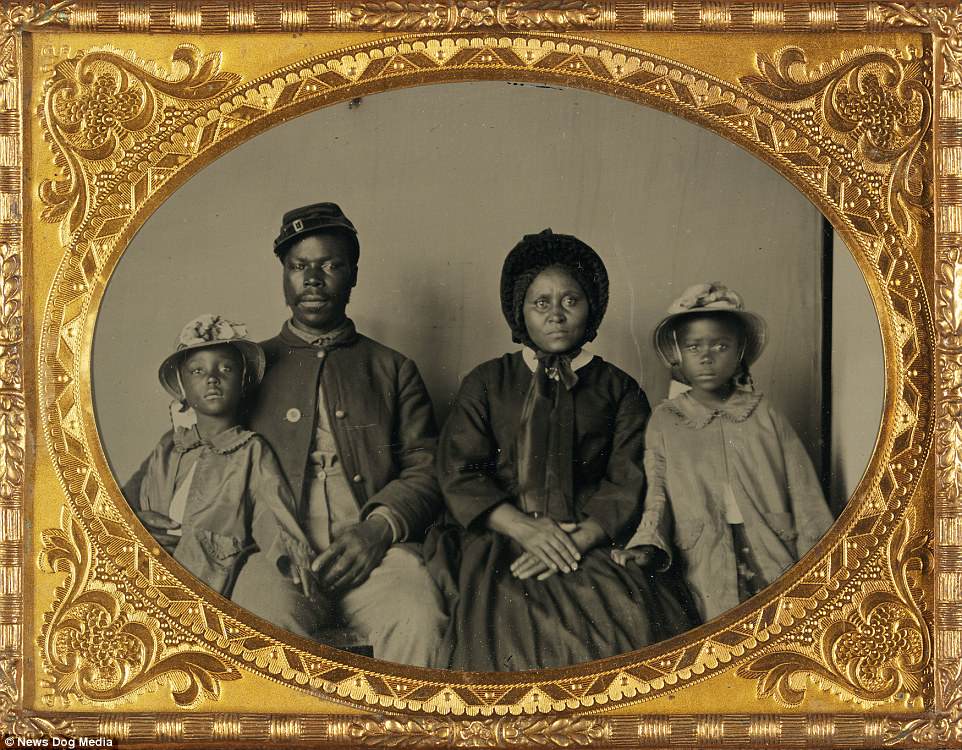 Sgt. Samuel Smith of the 119th United States Colored Troops Regiment with his family, circa 1866. Samuel and his wife Mollie were born into slavery in Kentucky. They are photographed with their children Mollie and Maggie. Samuel was the slave of a lawyer named Elisha Smith who before died actually signed for Samuel to enlist in the 119th in March of 1865 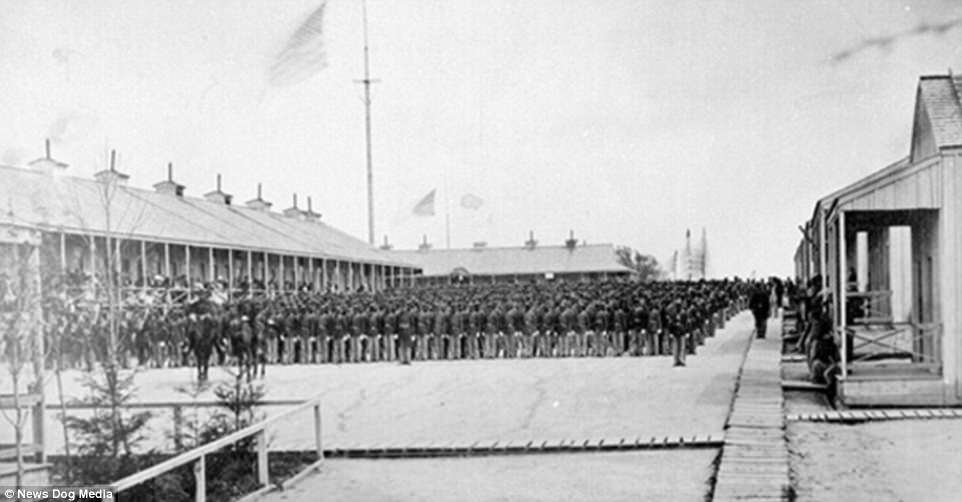 The 26th Regiment, US Colored Troops, organised by the Union League Club of New York at Riker’s Island, New York City, to fight in the U.S. Civil War. The unit saw action at battles at Johns Island, Honey Hill, and Tulifinny, South Carolina and was led by William Silliman, a captain noted for his heroism at Gettysburg 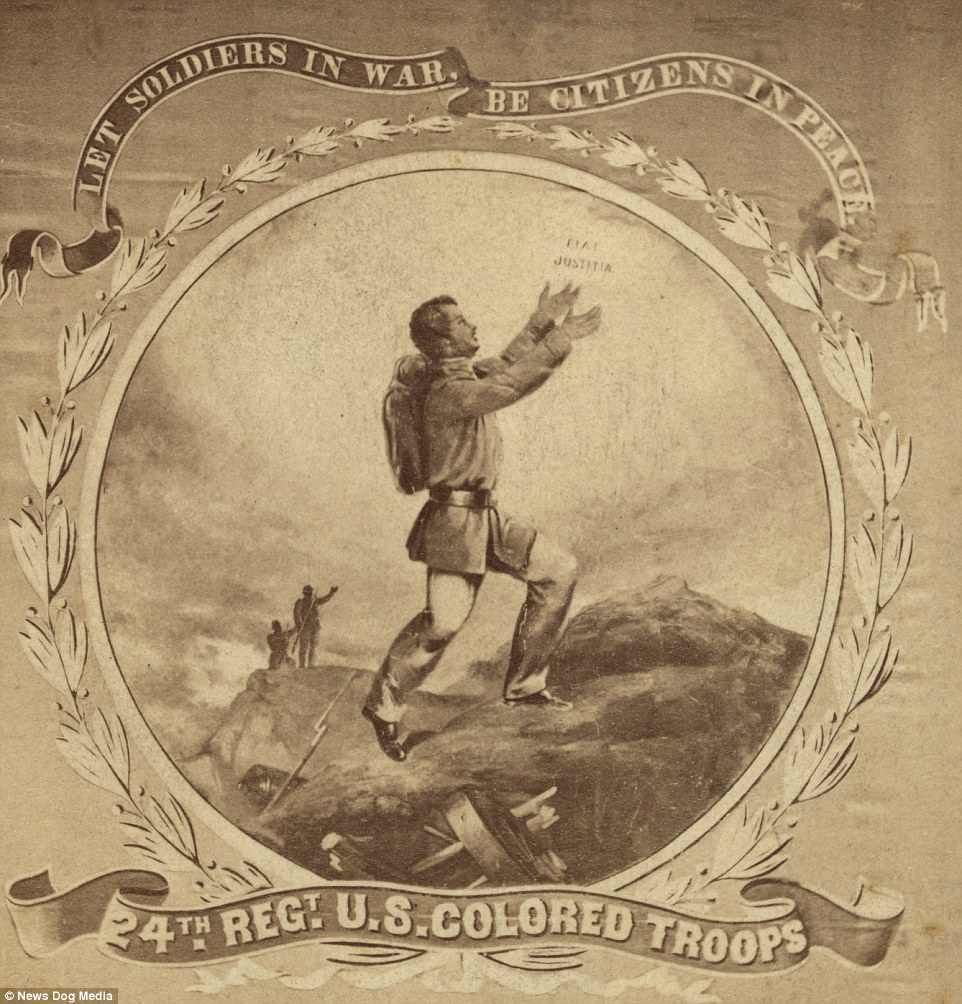 A poster for the 24th Regiment United States Colored Troops. The unit was organized at Camp William Penn near Philadelphia, Pennsylvania on January 1, 1865 under the command of Colonel Orlando Brown and was disbanded in October of that year

Who were the United States Colored Troops?

The United States Colored Troops (USCT) comprised approximately 175 regiments of more than 180,000 free black men, of whom 7122 were officers.

President Abraham Lincoln official authorized use of African-Americans in combat in the Emancipation Proclamation on January 1, 1863, which also freed slaves in United States.

But prior to that African-Americans had already begun serving.

In July of 1862, Congress passed the Militia Act , allowing the use of the African-American population to help save the Union.

A few weeks after President Lincoln signed the legislation, free men of color joined volunteer regiments in Illinois and New York and African-American Units and began to see action.

In August 1862, the War Department decided to officially allow the Union Army to recruit African-American soldiers.

It also said that any slave who fought would be declared free and this also meant freedom for their wives and children.

Those who volunteered where a mixture of free blacks living in the North and former slaves.

Two hundred and eight one of the charging soldiers were killed, wounded or captured – including one Colonel Shaw who had valiantly fought with his troops by leading from the front, but was shot in the chest and killed.

To show their contempt for the soldiers of the 54th, the Confederates dumped all of their bodies in a single unmarked trench and cabled Union leaders to say that “we have buried Shaw with his n*****s.”

For the remaining two years of the war, the regiment participated in a series of successful siege operations in South Carolina, Georgia and Florida. 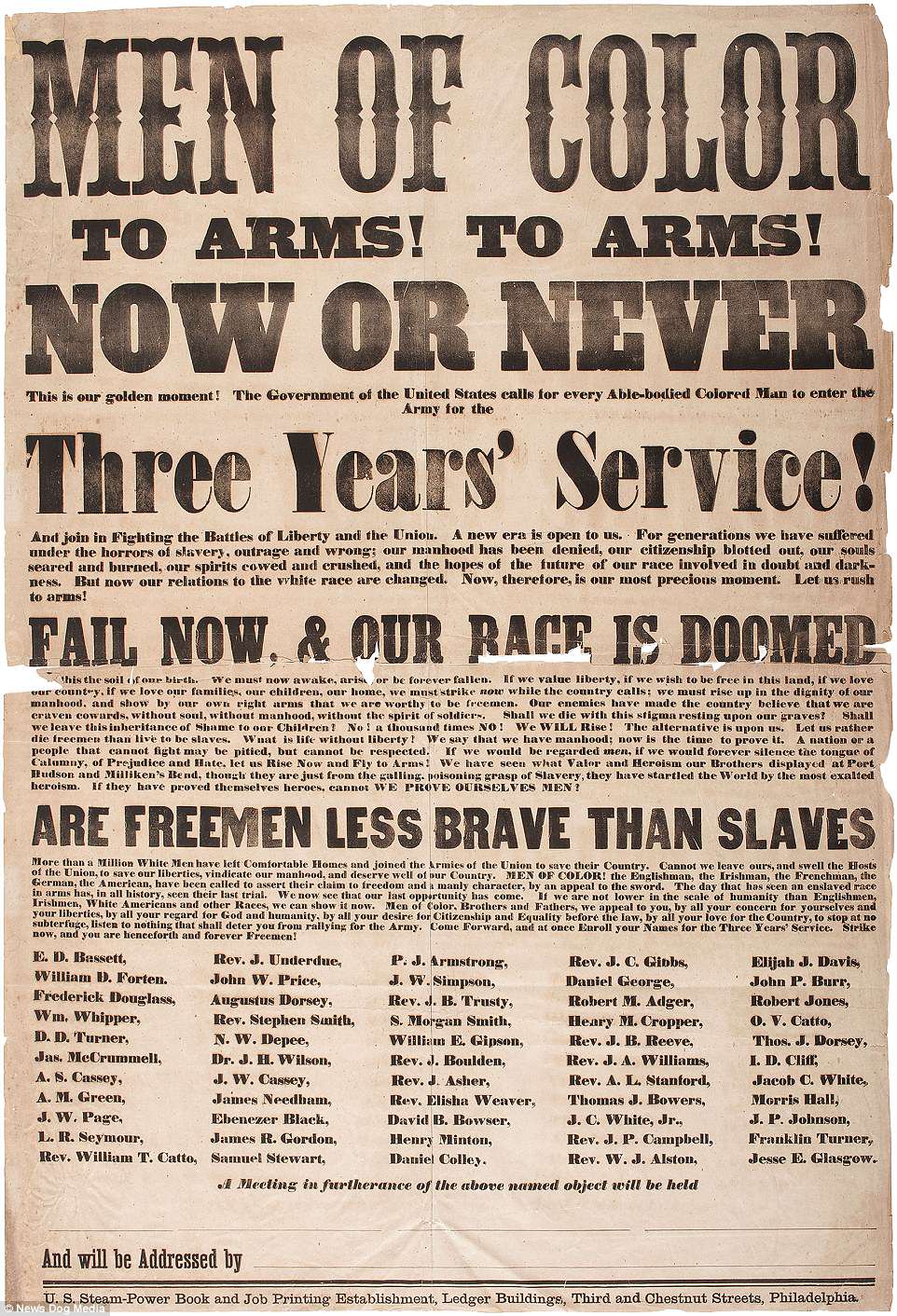 A printed recruitment poster urging men of color to enlist in the U.S. military after the Emancipation Proclamation in 1863. it was written by Frederick Douglass, signed by Douglass along with 54 leaders in the Philadelphia African American community, and published in the city