After 4,000 years scientists are set to unlock secrets of Bronze Age dagger covered in gold shards

By Simon De Bruxelles For The Mail On Sunday

Glittering with dazzling detail, its secrets have remained untold for thousands of years.

But now the full story of this once exquisitely beautiful jewelled dagger – buried near Stonehenge two millennia before Christ – may at last be revealed.

The Bronze Age artefact, called the Bush Barrow dagger after the site where it was found, was discovered in the burial mound of a chieftain 200 years ago.

A watercolour painted shortly after the discovery of the dagger in 1808 showed the handle in its golden glory.

Mystery: The dagger with a modern reconstruction of the handle

However, the handle began to disintegrate within hours of being dug up and exposed to the air, with just the golden shards remaining.

Archaeologists have long puzzled over the intricate handiwork of the handle, which was inlaid with more than 140,000 studs of gold, individually barely visible to the naked eye, each a millimetre long and no more than a third of a millimetre in diameter.

The studs were glued into pre-drilled holes with tree resin and formed into zigzag patterns at an incredible density of 1,000 studs to a square centimetre.

Experts believe only children aged no more than ten would have been capable of such delicate handicraft. Straining to see such tiny details may have extracted a heavy price, leaving their eyesight ruined. Until now, the source of the gold has been unknown. But scientist Dr Christopher Standish, of Southampton University, is carrying out tests to find out the exact origin.

One stud will be bombarded with X-rays to analyse the minute quantity of lead impurities mixed with the gold to reveal a telltale signature specific to one location. It is possible the gold came from Cornwall, Wales, Ireland or Brittany. 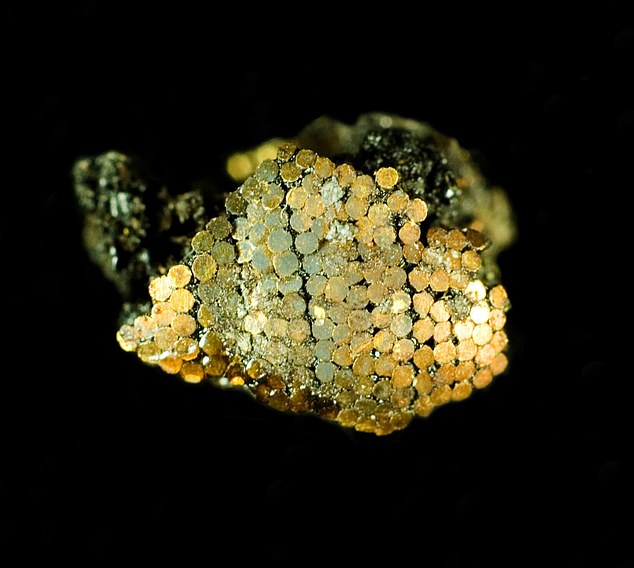 Minute gold shards: One stud will be bombarded with X-rays to analyse the minute quantity of lead impurities mixed with the gold to reveal a telltale signature specific to one location. It is possible the gold came from Cornwall, Wales, Ireland or Brittany

The dagger blade and remains of the handle are on display at the Wiltshire Museum in Devizes, near Stonehenge. Museum director David Dawson said: ‘Our spectacular gold-studded dagger is one of the most remarkable prehistoric artefacts in the world but we have no real idea who made it, or where.

‘There are other daggers with gold handles from the same period. Six were found in Britain and 22 in Brittany.

‘The other British ones were pretty rubbish, while the ones from Brittany were pretty good but none of them is anything like our Bush Barrow dagger. It is likely to have come from France.’

The dagger blade and remains of the handle are on display at the Wiltshire Museum in Devizes, near Stonehenge

‘They would have been unable to do any other work apart from the making of tiny artefacts and would have had to be supported by the community.’

The handle is estimated to have taken at least 2,500 hours to complete in six stages. 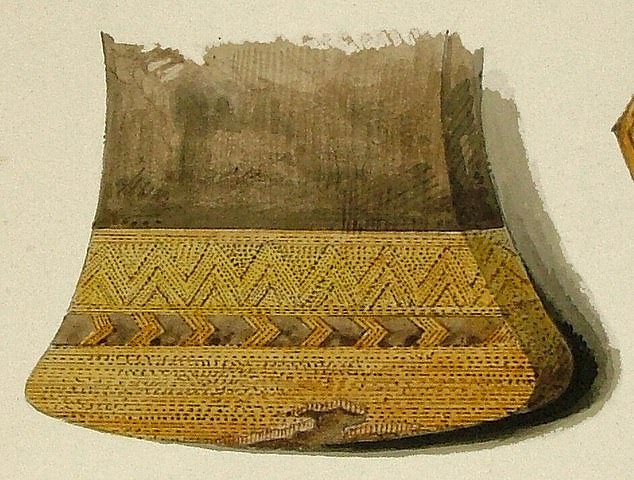 A painting of the dagger from 1808

First the gold would have to be rolled into wire as thin as a human hair. One end would be flattened to form the circular head of the stud and the wire would be cut with a fine flint blade.

A tiny bronze awl would have been used to drill holes in the wooden handle, which would then have been coated with sticky resin. Only then would the studs have been placed with tiny bone tweezers.

The result of the tests will be revealed in November.