After a tug of war with Massimiliano Allegri, Paulo Dybala is shining again under Maurizio Sarri

It was a moment of high quality which his brother and agent Gustavo Dybala described as ‘the goal of a gladiator’.

Gustavo was referring to his brother’s well-known gladiator mask celebration, but his words struck at something deeper. 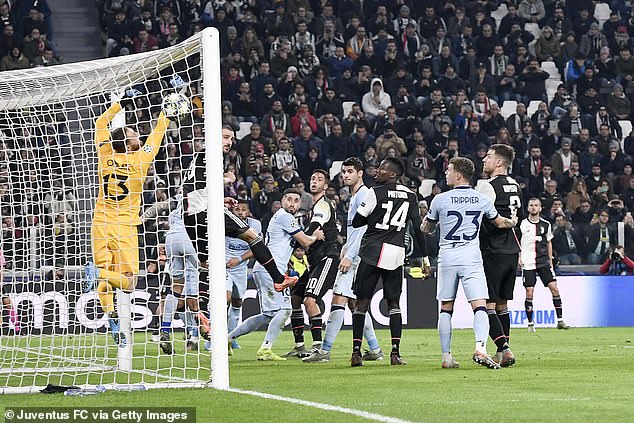 Dybala has displayed remarkable determination to revive his Juventus career after the war of attrition with former boss Massimiliano Allegri.

Their bubbling feud reached boiling point in February when Allegri witheringly called Dybala a ‘clever boy’ in the aftermath of the 3-3 draw with Parma.

The Argentine was an unused substitute in Turin and opted to leave the bench and walk down the tunnel before the end of the game. 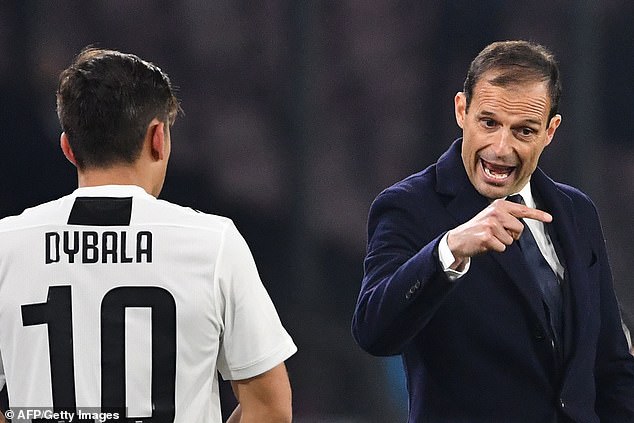 ‘He apologised,’ Allegri told reporters, ‘as it was right to do from a clever boy like him, to whom the club has given such important responsibility.

‘He had an attitude that is not appropriate, he understood that. Case closed.’

‘His position on the field has not changed, only the characteristics of those who play alongside him have.

‘The difference is that last year there was (Gonzalo) Higuain and (Mario) Mandzukic; this year there is Ronaldo and Mandzukic. He touches the same amount of balls, has the same opportunities. I do not tell him to be a full-back.’ 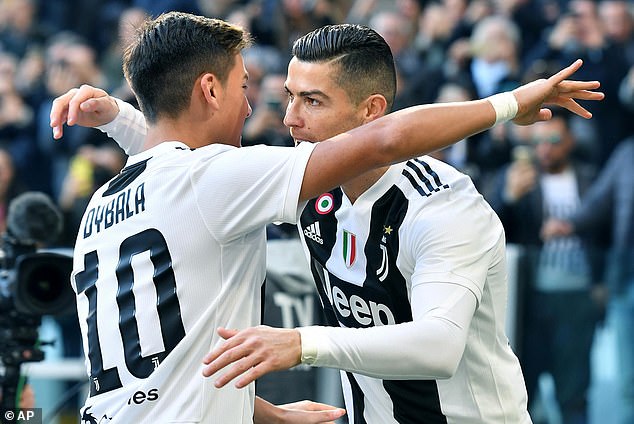 Despite winning the Serie A title, Dybala struggled to step out of Cristiano Ronaldo’s shadow

But Dybala undoubtedly felt he had been usurped by Ronaldo, Juve’s marquee signing who signed for £105million in July 2018.

Allegri rotated his forward line throughout the 2018-19 campaign to accommodate Ronaldo and Dybala paid the price, producing just 10 goals and two assists in 42 appearances, falling well below his high standards.

The forward, who can also operate on the flanks and in attacking midfield, scored 68 goals in three years following his £28.5m move from Palermo in 2015, and yet Juve chairman Andrea Agnelli considered selling him after one turbulent season.

Manchester United, Tottenham and Paris Saint-Germain were among the clubs linked with the 26-year-old but a deal was never agreed. 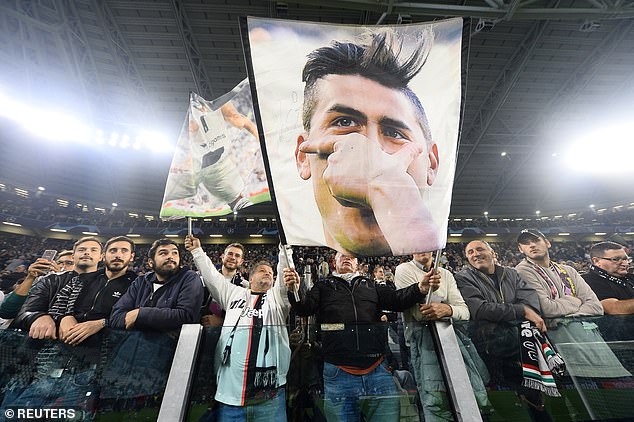 However, Dybala has shown fortitude throughout his life. It has been a key component of a successful career.

He grew up in Laguna Larga, a town with approximately 7,500 inhabitants. As a teenager, his father would take him almost 100 miles a day to train with Instituto in Cordoba, such was his devotion to the game.

But when his father was diagnosed with a tumour Paulo, then 15, insisted on a loan move back to hometown club Newell’s so he could spend time with his father before he passed away.

In trying circumstances, Dybala eventually left his mother and brothers and returned to Cordoba to live in Instituto’s academy.

He made his first-team debut in Argentina’s second division in 2011 and Palermo came calling just nine months later. 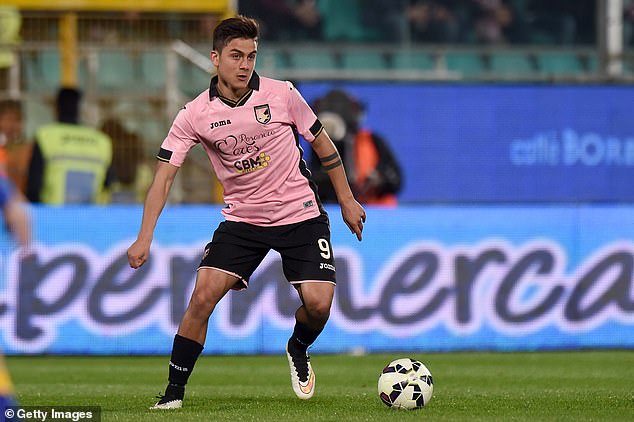 After Agnelli opted to replace Allegri with former Chalsea boss Maurizio Sarri in May 2019, Dybala sensed he could return to prominence at the Allianz Stadium.

Nonetheless Sarri was reluctant to select Dybala after the dispute with his predecessor and his underwhelming showing at the Copa America.

He made only four appearances in Brazil, featuring for just 91 minutes in total as Argentina finished third.

In 2017, he said: ‘It sounds a bit strange, but it’s a bit difficult to play with (Lionel) Messi, because we both play in the same position,’ an admission which has deterred managers from picking both in the same XI. 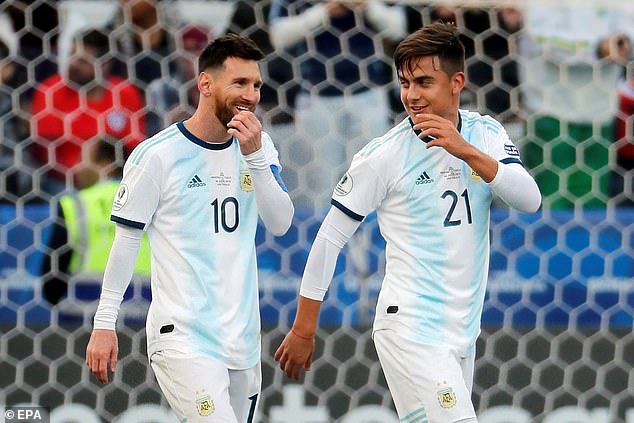 In a 2017 interview, Dyala said it is ‘difficult to play with Messi’ in the Argentina national team

At club level Dybala has rediscovered his clinical edge, providing seven goals and four assists in 17 appearances. His renewed partnership with Gonzalo Higuain – recently returned from a loan spell a Chelsea – has proved the catalyst.

Moreover, Dybala has re-established himself as a big game player. His stunning fourth-minute strike against Inter earned The Old Lady a momentous win over their title rivals, and he added attacking impetus from the outset.

His agility, long-range shooting and incisive passing have culminated in Serie A goals against Lecce, AC Milan and Bologna and assists against Brescia, SPAL and Sassuolo.

His Champions League double against Lokomotiv Moscow in October gave Sarri no choice but to keep him in the team, and the 60-year-old was left marveling at excellent free-kick against Atletico Madrid. 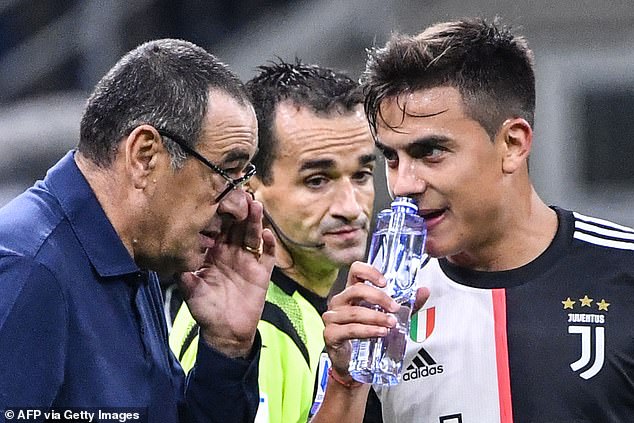 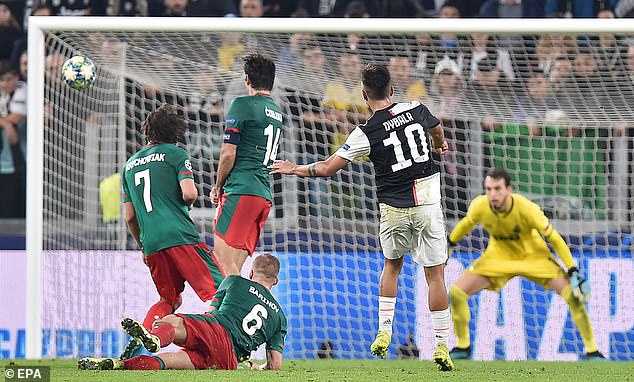 ‘Dybala scored a goal that no one could have advised him to do,’ Sarri told reporters.

‘The first thing a coach says in that situation is ‘what the f*** are you doing shooting from there for?”

‘Therefore what he did was extraordinary and he deserved the applause he got.

‘It was due to him for his performance and also the technical skill, which was extraordinary.’

‘Dybala is world class, in a very positive period of form, so right now he is making the difference.’