BERLIN (AP) – Chancellor Angela Merkel appears all but certain to win a fourth term when Germans vote Sunday after a humdrum campaign produced few divisive issues but saw smaller parties gain support – including the nationalist, anti-migration Alternative for Germany, which is set to become the most right-wing party in parliament for 60 years.

Pre-election polls give her conservative Union bloc a lead of 13 to 17 points over the center-left Social Democrats of her challenger, Martin Schulz. The two are traditional rivals but have governed together in a “grand coalition” of the biggest parties for the past four years.

German Chancellor Angela Merkel, left, speaks as supporters of the right-wing party Alternative for Germany or AfD hold up a poster during an election campaign in Giessen, central Germany, Thursday, Sept. 21, 2017. The poster reads “Islam is not part of Germany. The freedom of the woman is not negotiable!” (AP Photo/Michael Probst) 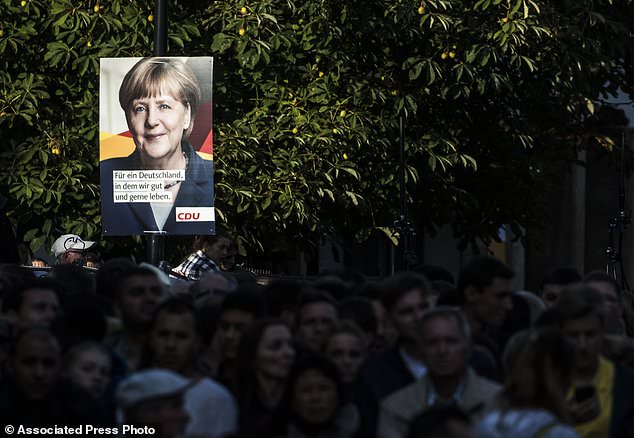 Numerous spectators stand under a poster of German Chancellor Angela Merkel during an election campaign event in Giessen, central Germany, Thursday Sept. 21, 2017. Slogan on the poster reads “For a Germany where we live good and enjoy it”. (Frank Rumpenhorst/dpa via AP) 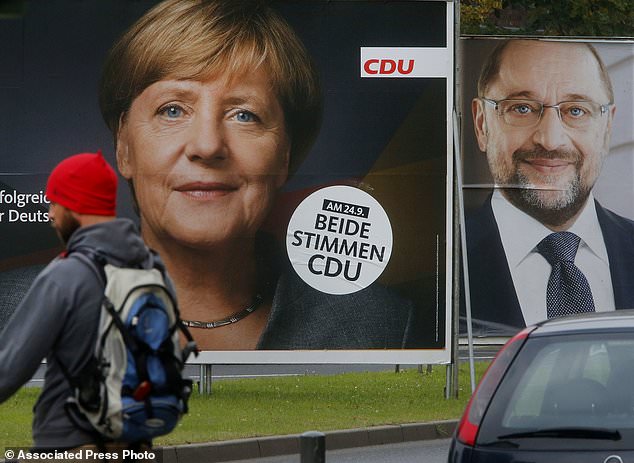