A woman has revealed how she turned her life around after a tragic miscarriage sent her spiralling into depression and an inactive lifestyle.

Jeanette Roberts, 40, from Wigan, went through a heartbreaking 2017 after she devastatingly miscarried two babies, which she and her partner Tony Rodgers, 47, had through two rounds of cash-sapping IVF treatment.

Turning to chocolate, crisps and biscuits for comfort, she quickly ballooned to size 22 and tipped the scales at 14 stone.

Hitting rock bottom and desperate to get her confidence back, Jeanette enlisted the help of a personal trainer and managed to drop six dress sizes in six months.

Jeanette Roberts, 40, suffered a tragic miscarriage of IVF twins after spending £12,500 on treatment. Devastatingly, she lost both babies in 2017 and piled on the pounds – but it took just six months and a lot of determination for her to drop six dress sizes (pictured now)

The couple, who have had to put their wedding on hold to raise the money needed, are unable to try again due to the strain on their finances.

Recalling their heartbreaking ordeal, Jeanette said: ‘We did two rounds of self-funded IVF, which cost £12,500. For the first attempt we didn’t have any suitable eggs, however the second time round we had two which were perfectly developed.

‘For a short period of time we were pregnant with two but sadly we lost them both and we don’t have the funds to try again.’

The couples’ devastating loss hit them both hard. Jeanette describes herself as having had ‘zero confidence’ and ‘in a very low place mentally and physically’, finding herself eating bars of chocolate three or four times each day which caused her to balloon to more than 14 stone.

At a crossroads, Jeanette felt she needed a focus in her life and decided to start training again at her local gym, Xercise4Less, in May of this year.

It was there that she and Tony began working with a personal trainer, Michael Chatziminas, with whom they have both formed a close bond. 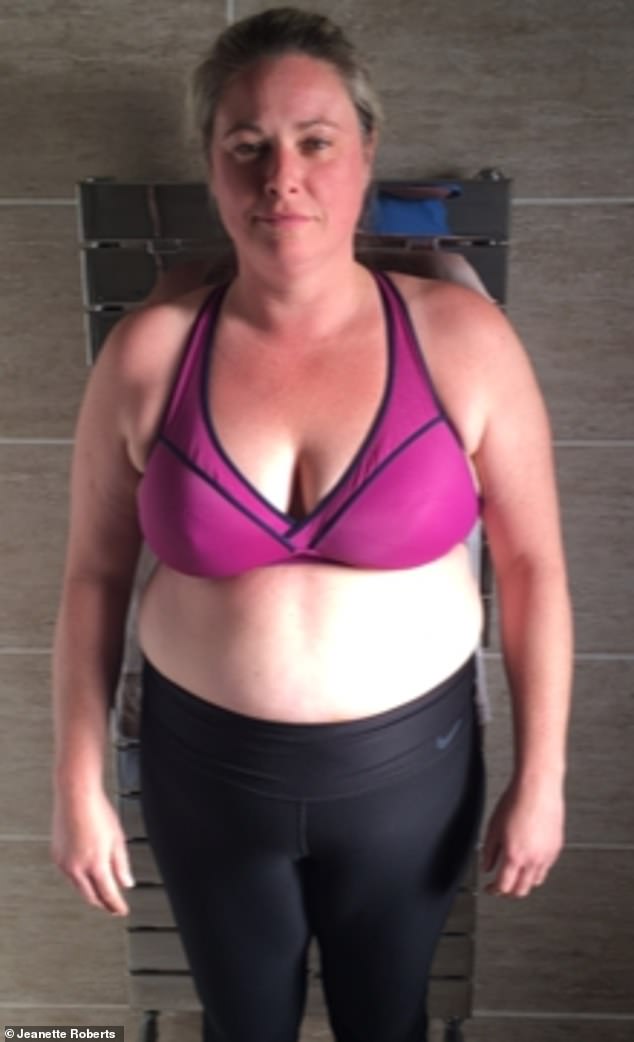 After their devastating loss, heartbroken Jeanette said she had ‘zero confidence’ and was in ‘a very low place mentally and physically.’ Devouring on chocolate bars up to four times a day, she tipped the scales at 14 stone 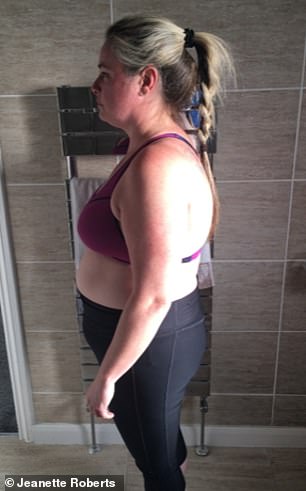 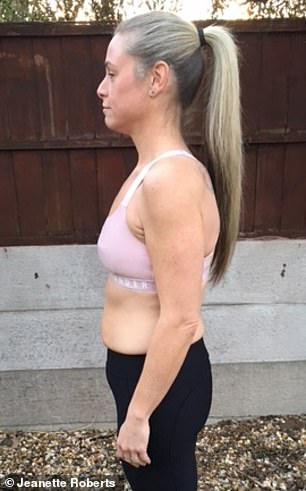 Before and after: Determined to get her confidence back, she hit her local gym with her partner Tony and managed to lose a whopping four stone in just six months!

Reflecting on her heartbreak, the 40-year-old explained: ‘2017 was an incredibly difficult year for me and I was in a very low place, mentally and physically. I was at a crossroads in my life and didn’t like the way I was heading.

Since working with Michael, Jeanette has lost an incredible four stone and has dropped six dress sizes, going from size 22 to a slender size 10.

Her transformation has restored her confidence and brought her closer together with Tony.

Team work: Now a slender size 10, Jeanette’s weight loss has not only restored her confidence but has brought her closer to Tony. The slimmer has even  got a new job and said she is finally  ‘happy’ in so many aspects of her life 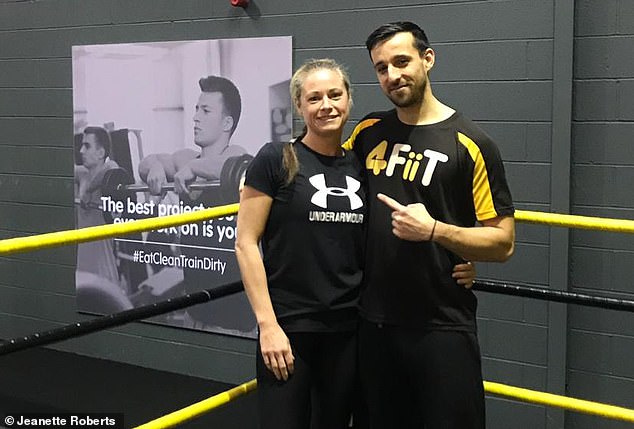 Motivated: The super slimmer turned to personal trainer Michael to help her shed the pounds. While she didn’t realise it at the time, the newly-formed fitness fanatic credits him with ‘saving’ her life

Dinner: Yoghurt with fruit and nuts

‘Michael has absolutely delivered! Finding him and doing this journey with Tony has been the key to it working. Together we are a great team and we have started to come through our tragic 2017.

‘Xercise4Less has helped me get my life and confidence back. I successfully applied for a new job and I’m happy in so many aspects of my life. The difficult year in 2017 will always leave me scarred but I have a focus now which is completely what I need.’

Jeanette, who until now has only told close family and friends about her miscarriage, cannot praise Michael enough for helping her turn her life around.

She said: ‘I’d like to thank my incredibly supportive family and friends, as well as Michael, who never gave up on me and were always there for me.

‘When I started with Michael in May I was in the worst place I’ve ever been in my life. It was sink or swim. That’s why Michael is so special to me and my partner Tony, because he literally saved my life. Michael knows about our IVF but we only told him a few weeks ago. He saved my life without even realising it.’