A 112-year-old woman who once said the secret behind her astonishingly long life was three Miller High Life beers a day and a shot of whiskey died Thursday morning.

She was actually born Agnes Jones in Holly Springs, Mississippi, on August 1, 1905. Agnes grew up in Memphis, Tennessee, and moved to Englewood in the 1950s with her second husband Vincent Fenton, who died in 1970.

As a young woman, Agnes became one of the first African-American women to own and operate a business with the opening of The Pals Duck Inn, located in Memphis.

New Jersey’s oldest resident, Agnes Fenton (pcitured in 2015), 112, who once said the secret behind her astonishingly long life was three Miller High Life beers and a shot of whiskey, died at her home on Thursday

In 1943, Agnes was given the unusual prescription of alcohol by her doctor in 1943 for a benign tumor.

For the past seven decades, she has credited her health and remarkable longevity to having three beers and a shot of whiskey every day.

And while Agnes, who first revealed her secret to a long life just before her 105th birthday, according to The Record, has remained loyal to her budget-friendly beer of choice, when it comes to the chaser, she prefers to take shots of Johnnie Walker Blue Label, a top shelf liquor that costs more than $150 a bottle.

However, in 2015 Agnes was forced to give up on her time-honored tradition because she began eating very little and her caregivers no longer wanted her drinking alcohol.

At 112 years old Agnes was one of the few supercentenarians in the world, with a current estimate of 300 to 600 of them on the planet.

In a 2015 interview with ABC News, Agnes, who has no children, explained that her only serious health problem was the tumor that developed in her early 30s, and when the doctor discharged her, he told her she ‘must drink three Miller High Lifes a day’.

Nurses would stay with her around the clock, while neighbors and and friends often stopped by to check on her. She also received visits from parishioners of St Mark’s Methodist Church in Harlem. 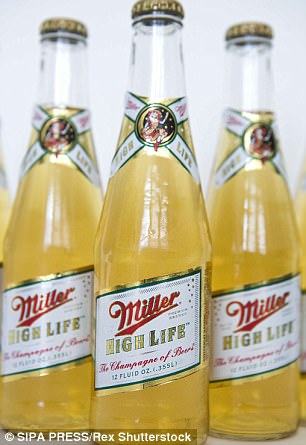 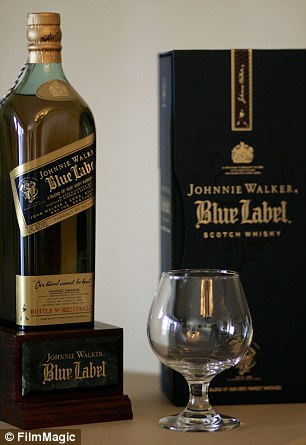 Secret to eternal youth: Agnes revealed in 2005 that her secret to a healthy life was three Miller High Lifes (left) and shot of whisky a day. The 112-year-old said in 2015 that she prefers Johnnie Walker Blue Label (right)

Agnes, who still had her hearing and eyesight, up until her last breath, spent her days reading the newspaper, listening to the news on the radio, praying, and, of course, sleeping a lot.

Her physician, Dr Kenneth Wasserman, has been seeing her for nearly 20 years, and he could never wrap his head around her longevity.

‘Her health has been phenomenal. … She’s completely, thoroughly amazing,’ he said in a 2015 interview.

‘When I was 100 years old, I went to the mirror to thank God that I was still here. And I thank him every morning,’ Agnes said after her 110th birthday.

Over the years, the supercentenarian has received birthday wishes from both former president Barack Obama and Gov Chris Christie.

The city even proclaimed her birthday ‘Agnes Fenton Day’ 12 years ago.

Funeral arrangements have not been finalized.