Some of the results have a passing resemblance to the real thing, while others are like a window into a dystopian nightmare.

UK rental agency My Favourite Cottages used it to reimagine tourist spots including Stonehenge, Edinburgh Castle, The Tower of London and Mount Snowdon

How does DALL-E work?

DALL-E relies on artificial neural networks (ANNs), which simulate the way the brain works in order to learn.

ANNs can be trained to recognise patterns in information, like speech, text data, or visual images.

OpenAI developers gathered data on millions of photos to allow the DALL-E algorithm to ‘learn’ what different objects are supposed to look like and eventually put them together.

When a user inputs text for DALL-E, it notes a series of key features that could be present.

A second neural network, known as the diffusion model, then creates the image and generates the pixels needed to visualise and replicate it.

DALL-E relies on artificial neural networks (ANNs), which simulate the way the brain works in order to learn and create an image from text.

OpenAI says the tool is able to ‘create plausible images for a great variety of sentences that explore the compositional structure of language’.

‘It has a diverse set of capabilities, including creating anthropomorphized versions of animals and objects, combining unrelated concepts in plausible ways, rendering text, and applying transformations to existing images,’ it says.

My Favourite Cottages analysed a selection of one-star reviews on TripAdvisor for each attraction and fed the most common or spicy complaints into the tool.

For example, some of the worst reviews about Bath’s historic Roman Baths, constructed between 60-70AD, criticise their confined space.

According to its worst reviews, visitors are ‘crammed in around the baths’ and have to endure ‘long queues’, while the baths themselves have even been likened to ‘an uncleaned pool’ or ‘green puddle’.

DALL-E’s reimagining of the baths features a throng of bodies that on close inspection appear grotesquely distorted, like something from a horror film.

Roman Baths have received nearly 24,000 Trip Advisor reviews and have an average rating of four and a half stars. 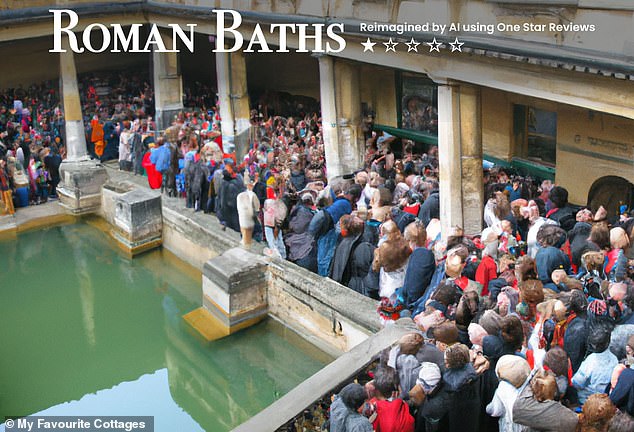 One-star reviews for Wiltshire’s Stonehenge criticised the ‘huge, barbed wire fences’  obstructing views of the old stones, which are thought to date back to 2500 BC.

Another review mentioned ‘security guards in florescent jackets’, while another simply referred to Stonehenge as ‘large-scale rubble in a vague circle’.

Using these words as inspiration, DALL-E created a depressing recreation that wouldn’t have looked out of place at Banksy’s Dismaland.

The stones themselves are made to look smooth and straight, as if made from gigantic paving slabs rather than ancient sandstone. 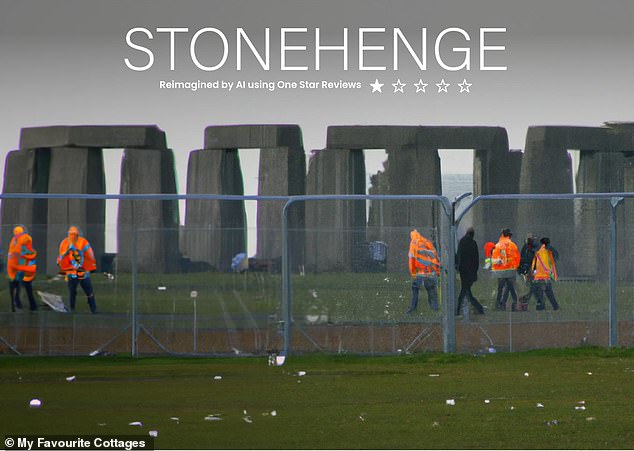 The Angel of the North, a 250-foot-tall sculpture located by the A1 road in Gateshead, Tyne and Wear, also got the DALL-E treatment.

Angry reviewers found the sculpture to be ‘like an upended aeroplane’, ‘rusty old junk’ that ‘needs painting’ and an ‘eyesore’ amongst beautiful natural landscape.

The AI interpretation grossly exaggerates its distance to the road – it appears just the other side of the safety barrier, rather than 285 feet away as in real life. 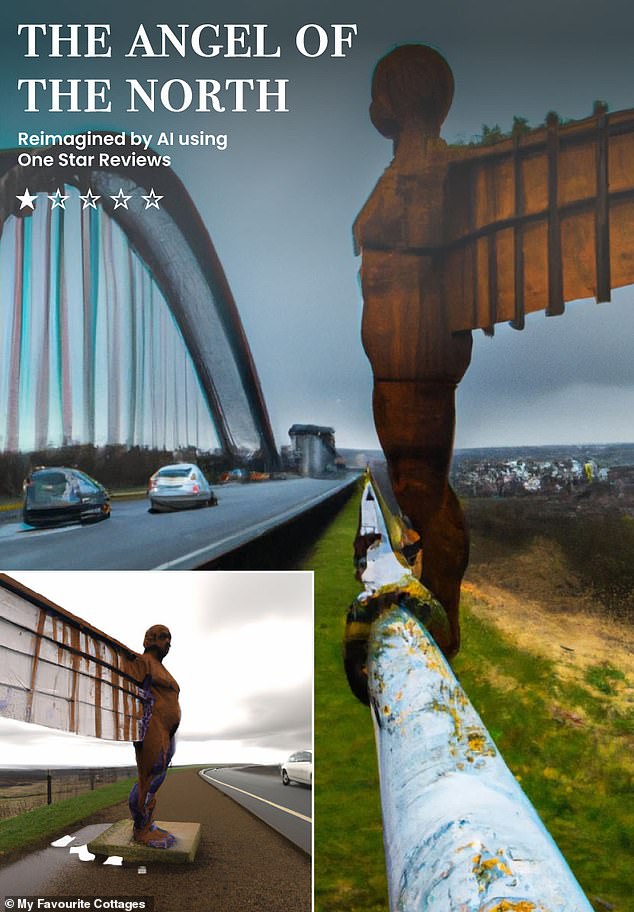 Brighton’s Grade II listed Palace Pier is one of the biggest tourist attractions in the southeast – and is one of three piers to have graced the city’s shores.

One-star reviews for the Victorian structure mentioned ‘long queues’ for rides, many closed or broken, while the pier itself was ‘slippery’ and ‘littered’ with ‘full bins’ and ‘paint falling off’.

DALL-E makes it look more like its unfortunate older sibling the West Pier, which fell into disrepair and gradually collapsed.

The West Pier’s eerie skeleton is still visible today, although further damage from stormy weather means it could one day disappear forever. 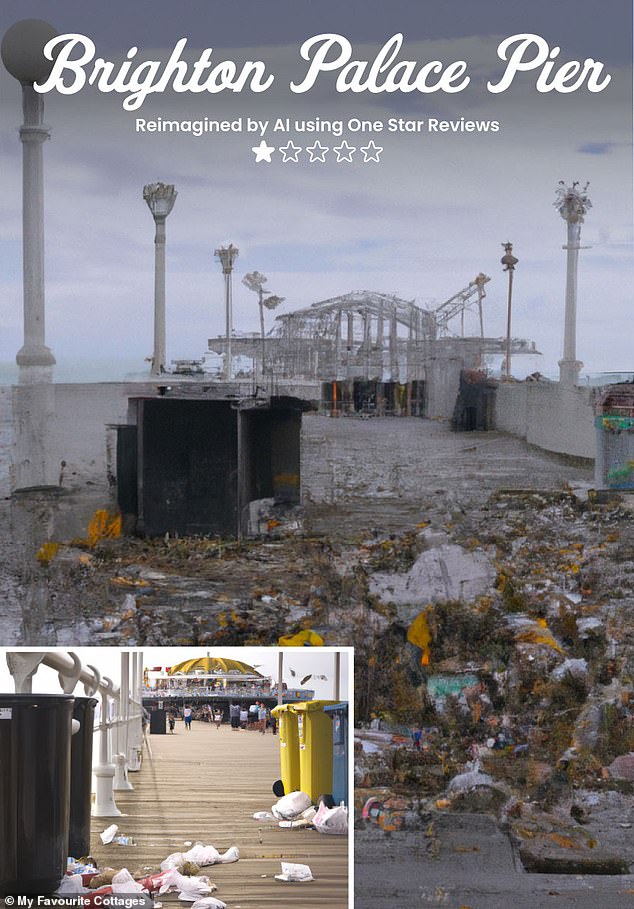 Brighton Palace Pier is made to look like a shadow of its current self with litter, detritus and what looks like abandoned furniture

Meanwhile, DALL-E’s version of the Eden Project looks like a crude approximation of the real thing created by your mate in their back garden.

Reviews for the famous Cornwall attraction – featuring two enormous biomes containing rare plants – described it as ‘tired-looking’ and ‘run down’.

They also mentioned ‘overcrowding’, ‘dying plants’, ‘overflowing bins’ and a ‘long walk to the domes’ from parking facilities. 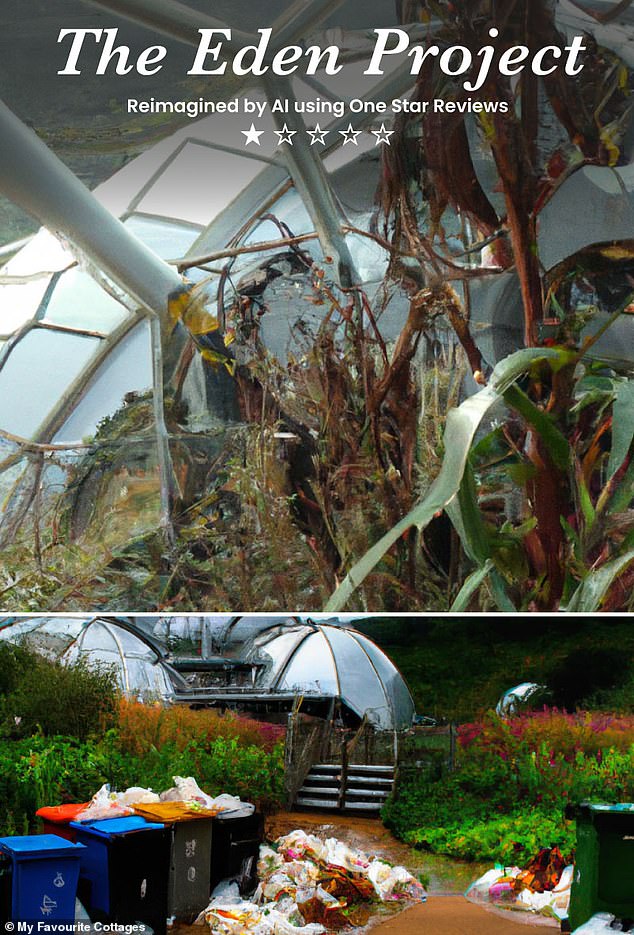 Opened in 2003, the Eden Project celebrates plants and the natural world by growing a wide range of species in its two enormous biomes – but DALL-E depicts a low budget approximation

Of all the UK tourist attractions, the agency found The Needles had the lowest average review score – three and a half stars – while 8.61 per cent of its nearly 5,000 reviews were one-star.

The Needles is a row of three chalk stalks protruding about 100 feet out of the sea on the Isle of Wight.

The most common complaints made by visitors were that the chairlift down to the beach ruined the landscape, making it hard to get a picture-perfect view.

DALL-E makes the chairlift look even more of an eyesore than the real thing, more like a broken down electricity pylon. 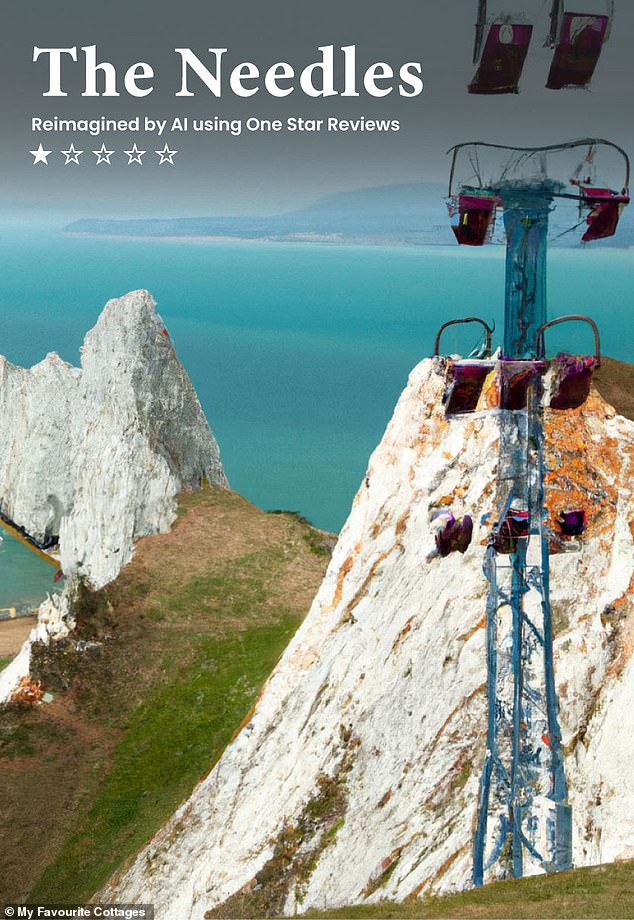 The full results of the study can be viewed on My Favourite Cottages’ website.

DALL-E imagines outside the frame of famous paintings

Lensa AI can ‘distribute’ your photos without compensation

Outpainting allows the system to imagine what’s outside the frame of famous paintings such as Girl with The Pearl Earring, Mona Lisa and Dogs Playing Poker.

As users have shown, it can do this with any kind of image, such as the man on the Quaker Oats logo and the cover of the Beatles album ‘Abbey Road’.

DALL-E relies on artificial neural networks (ANNs), which simulate the way the brain works in order to learn and create an image from text.

DALL-E already enables changes within a generated or uploaded image – a capability known as Inpainting.

It is able to automatically fill in details, such as shadows, when an object is added, or even tweak the background to match, if an object is moved or removed.

DALL-E can also produce a completely new image from a text description, such as ‘an armchair in the shape of an avocado’ or ‘a cross-section view of a walnut’.