From abstract expressionist masterpieces to perfect portrayals of the real world, artificial intelligence (AI) can create artworks that are indistinguishable from pieces painted by humans, a new study reveals.

In online surveys, around 200 humans were unable to suss the human-made artworks from the artificial art, the US author reports.

AI art is created by machine learning algorithms that are trained with many thousands of images of real paintings.

The more images of a particular style or aesthetic that the algorithm analyses, the more human-like the results can be, down to fine details like brushstrokes.

Despite AI paintings already selling for hundreds of thousands of pounds, replicating artistic human emotion appears to be the final frontier for technology.

Can you tell the difference between a human-made and an AI-made artwork? There are six paintings included from the research paper, labelled A to F (E and F are below). Find out the answers at the bottom of this article

However, the study author thinks it may not be long until computers can produce random and unpredictable pieces that move people emotionally.

‘Creativity and the creative process is the last remaining frontier where humans still hold the edge,’ study author Harsha Gangadharbatla, a professor at the University of Colorado Boulder, told the Times.

‘If computers are producing something that humans implicitly think of as human, as the quintessence of what it is to be a human, then what does it mean to be us?’

‘The big question is can we “algorithmise” emotion?’

Data for the study, which is published in Empirical Studies of the Arts, was collected using an Amazon Turk sample from two survey experiments. 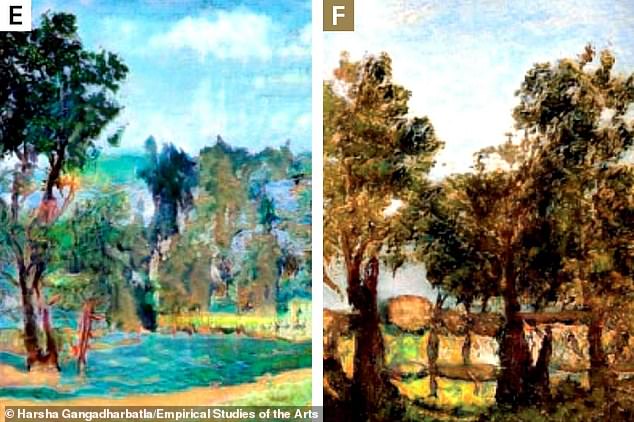 Pictured are attempts at representational art. But are they human-made or machine-made? Find out the answers at the bottom of this article

WHAT IS REPRESENTATIONAL ART?

They’re representing something with strong visual references to the real world.

For example, a painting of a cat looks very much like a cat – and it’s quite obvious what the artist is depicting.

Results also showed that the volunteers were generally likely to associate representational art with humans and abstract art with machines.

Representational art is clearly derived from real-life sources and therefore tends to portray something in the real world, like people, a field or a building.

Abstract art, meanwhile, does not attempt to reflect reality, and so volunteers tended to associate it more with machines.

This is despite the fact the best abstract art can stem from intense human emotions, in the case of artists such as Pablo Picasso and Mark Rothko.

‘Artwork is increasingly being created by machines through algorithms with little or no input from humans.’ said Professor Gangadharbatla.

‘Yet, very little is known about people’s attitudes and evaluations of artwork generated by machines.’

Professor Gangadharbatla also found volunteers’ attribution knowledge – knowing whether a human or AI created each piece – had an influence on in their evaluation and reception of it.

Unsurprisingly, paintings tend to be valued less if they were created by a computer – but AI-made pieces are still going for impressive amounts.

Christie’s said the winning bidder wanted to remain anonymous, but confirmed the price skyrocketed from its initial valuation of $10,000 after a five way bidding battle. 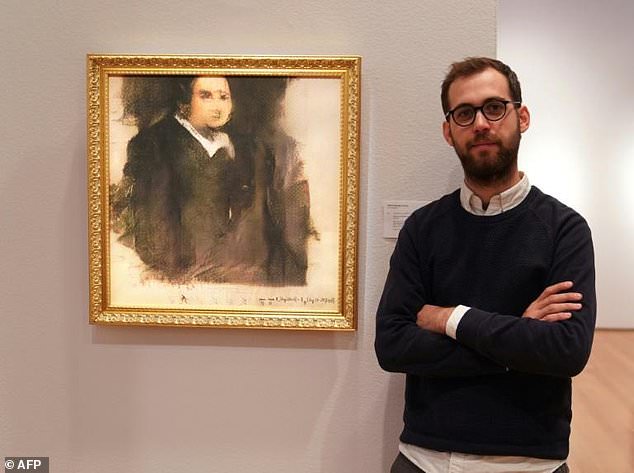 Pierre Fautrel, a member of the French art collective Obvious, poses in front of ‘Portrait d’Edmond Belamy,’ an image created using artificial intelligence that sold for a whopping £337,000 in 2018

The fictional subject, Edmond de Belamy, is described by Christie’s as a ‘portly gentleman, possibly French and – to judge by his dark frockcoat and plain white collar – a man of the church.’

The AI painting even carries the signature of the actual algorithm used to create it.

It was created by a Paris-based trio who used a ‘generative adversarial network’ to store 15,000 portraits painted between the 14th and 15th centuries into their algorithm.

Generative adversarial networks (or GANs) work by pitting two algorithms against each other, in an attempt to create convincing representations of the real world.

Another algorithm called PaintBot, created by researchers at University of Maryland, the ByteDance AI Lab and Adobe Research, meticulously studies the work of virtuoso painters like Vermeer and Van Gogh and learns to reproduce their works.

PaintBot uses deep learning techniques to master the way that each artist lays their brushstrokes on the canvas, mimicking stroke colour, density and size.

Once adept at a given approach, the AI can then make new works of art in the learnt style based on photographs given to it.

The algorithm, dubbed ‘PaintBot’, is the creation of a team of researchers from the University of Maryland, the ByteDance AI Lab and Adobe Research.

PaintBot can not only reproduce the work of different artists, but also can create new works based on photographs in the chosen painter’s characteristic style.