The shocking story of how a US Air Force bomber accidentally dropped a nuclear bomb on a South Carolina family’s home and left a huge crater has been revisited.

In 1958, the US Airforce accidentally dropped the atom bomb on a family’s backyard after a series of mishaps led the navigator on a B-47 bomber to accidentally pull the nuke’s emergency release handle while trying to fix the bomb, and looking for something to hold onto.

Fortunately for the family of six below, and the surrounding neighborhood of Mars Bluff, only the bomb’s TNT detonator went off. Speculation continues as to whether the nuclear core of the bomb had been kept in a separate part of the plane, or if the atom bomb was fully active and just failed to go off by chance.

That left a crater that was 50 feet wide and 30 foot deep, killed the family’s chickens, and badly damaged their home and car.

They were all concussed, but thankfully weren’t more seriously-injured, with the B-47’s crew terrified they’d set off an actual blast as a mushroom cloud of dust from the TNT rose into the air.

It was around 4pm on March 11, when the Gregg sisters Helen, 6, Francis, 9,  along with their cousin Ella Davies, 9, had tired of a playhouse in the woods behind the Gregg family house, and decided to move to a yard at the side of the house about 200 yards away.

Unbeknownst to them, the move would save their lives. About 19 minutes later a, 7,600-pound, Mark 6, 30-kiloton atomic bomb fell 15,000 feet to land almost directly on the playhouse, exploding and leaving only scraps of tin left from the corrugated metal that had served as its roof, American Heritage reported in 2000.

In 1958, a B-47 bomber (pictured) accidentally dropped a nuclear bomb in the backyard of a home in South Carolina 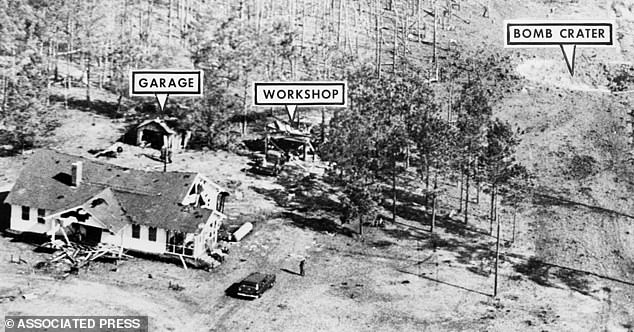 Whil only its TNT detonator went off, the bomb left a 50-foot crater, and damaged the Gregg family home as well as other neighboring structures

The bomb’s nuclear material core was believed to have been removed for transport, and kept elsewhere in the aircraft, but the Gregg family recalled the still-tremendous explosion caused by its TNT detonator – used to create the nuclear chain reaction in the bomb’s fissionable material.

The family’s dad Walter Gregg recalled the dust and smoke the kicked up by the explosion, and the large chunks of earth thrown up into the air that would fall back down to earth damaging his house and other buildings nearby.

He had been working in the family workshop building benches with his son Walter Jr, he told the Sun News in 2003. His wife, Effie, was inside their house.

‘You couldn’t see 10 feet in front of your face,’ Gregg, who was 82 at the time of the interview, said. ‘The only thing I could figure is that that plane had crashed.’ 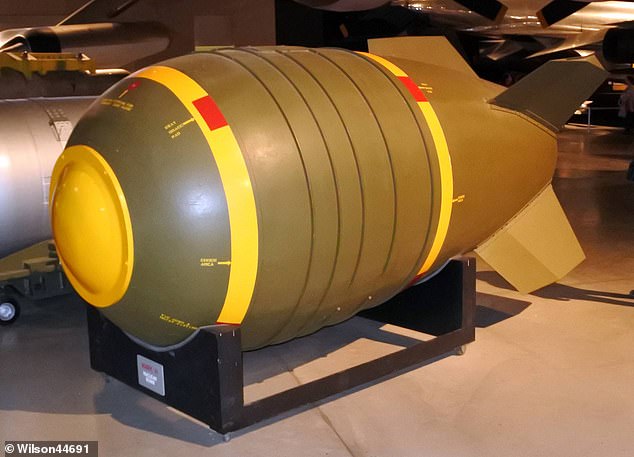 The type of bomb dropped was a Mark 6, 30-kiloton bomb 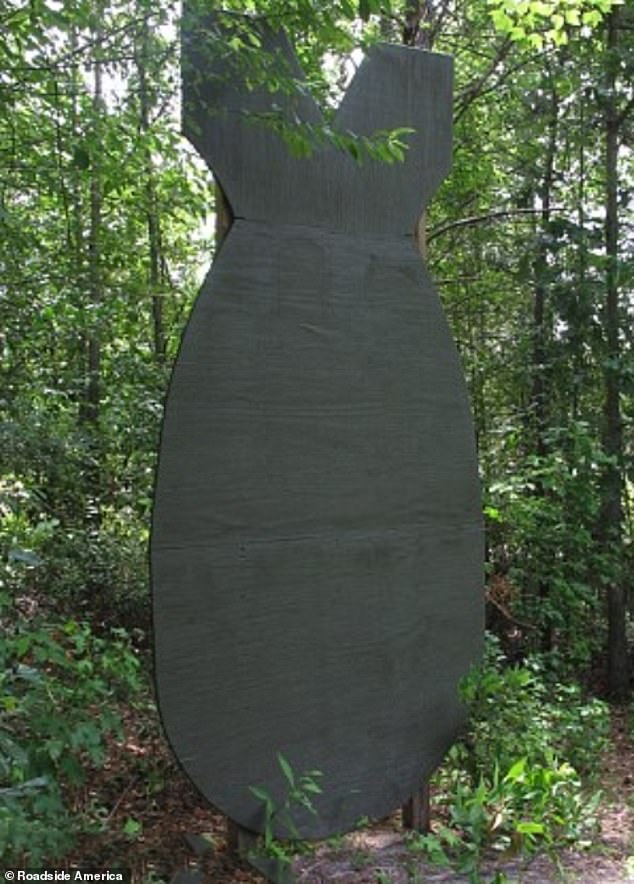 A marker denoting where the nuclear weapon made impact with the ground after falling 15,000 feet 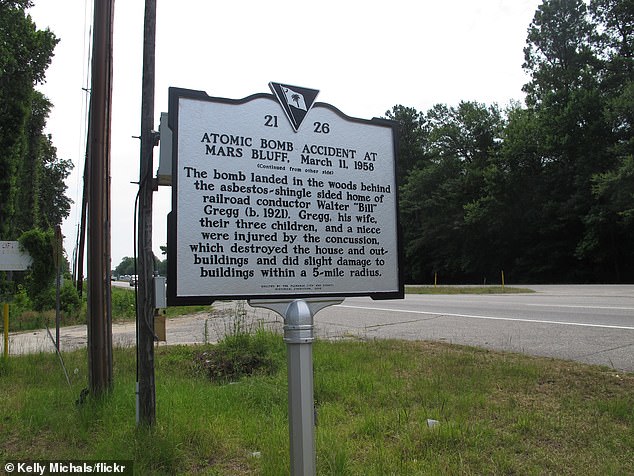 Due to the novelty of the incident, site of the explosion is now a landmark

The six-engine B-47 had been flying overhead as part of Operation Snow Flurry – a nuclear preparedness drill – and was headed to the UK for a simulated bombing run.

From the start, however, the mission was beset by problems.

Before takeoff, ground crews struggled to secure the Mark 6 payload in place, and under a strict time limit, had to hoist it on a sling before they were able to secure it with its locking pin.

As an early jet bomber, however, the B-47 suffered from a number of design flaws and was notoriously difficult to fly, American Heritage reported.

As a result, procedure called for the crew to disengage the bomb’s locking mechanism during takeoff in case they needed to quickly jettison it.

Due to their unorthodox method of securing the payload with a hammer, however, the lock wouldn’t re-engage, leading crew member Bruce Kulka, 29, to head to the bomb bay to manually re-secure the locking pin. 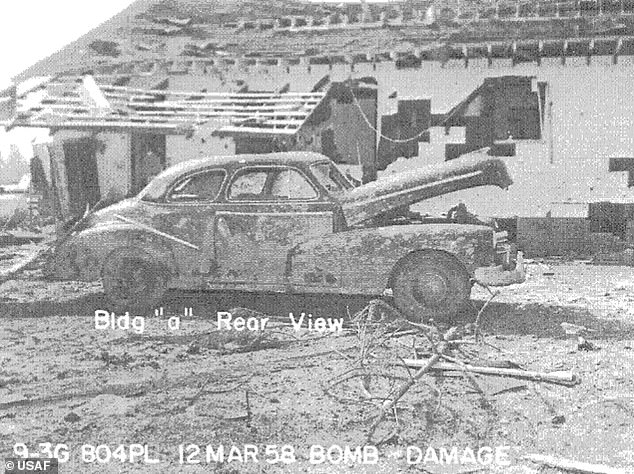 While the Gregg family suffered relatively minor injuries, their property was not so lucky, including their Chevrolet Sedan (pictured) which was declared a total loss 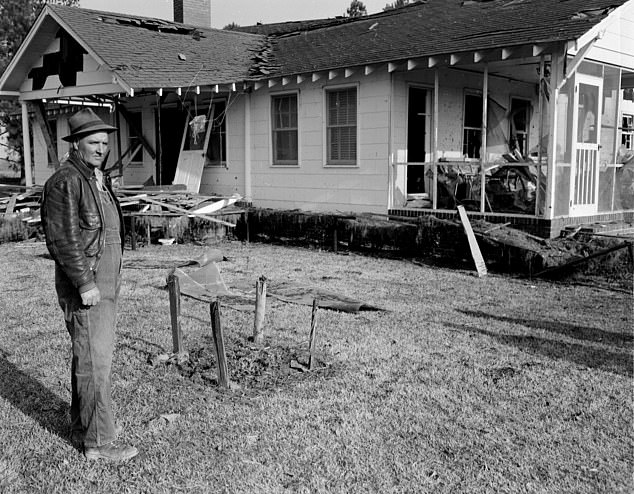 The Gregg family home was severely damaged, and ultimately they would win $54,000 from the government for their hardship

But Kulka, a navigator on the plane, didn’t know where the mechanism was located.

‘A short man, he jumped to pull himself up to get a look at where he thought the locking pin should be,’ American Heritage reporter Clark Rumrill wrote.

‘Unfortunately, he evidently chose the emergency bomb-release mechanism for his handhold. The weapon dropped from its shackle and rested momentarily on the closed bomb-bay doors with Captain Kulka splayed across it in the manner of Slim Pickens in Dr. Strangelove.’

Soon, the weight the bomb started to break the bay doors open, and Kulka desperately grabbed for anything that would prevent him from falling out of the plane. He had removed his parachute in order to squeeze his way into the bay. 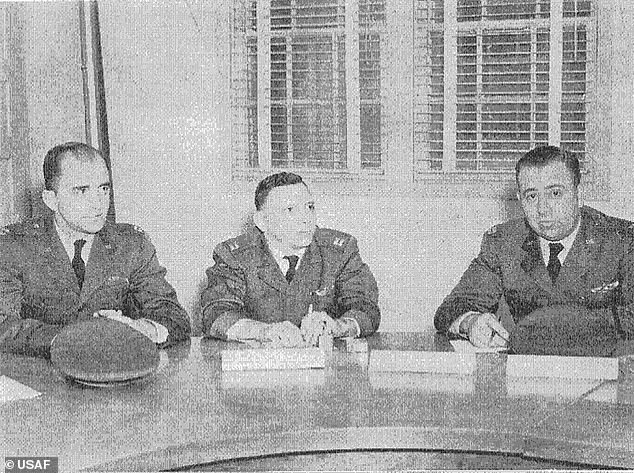 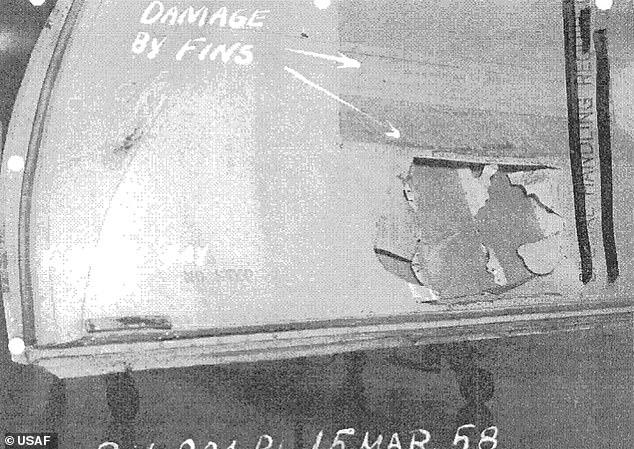 The nearly four-ton bomb dropped onto the plane’s bay doors (pictured), damaging them and breaking through before plummeting to the earth

First he grabbed a bag, which came lose, and then another object, which he couldn’t recall, and hauled himself to safety as the nearly four-ton bomb broke through the belly of the aircraft and fell to earth.

The blast caused some minor injuries to the Gregg family, with Ella suffering the most serious, requiring 31 stitches, and surgery to repair some internal bleeding.

Within hours of the bomb falling, Air Force personnel from two nearby bases descended on Mars Bluff, and quickly determined that no radiation had resulted from the explosion.

After, the government changed its protocols for bomb storage, including modifying their arsenal to include detonators that couldn’t go off by impact alone National Heritage reported. 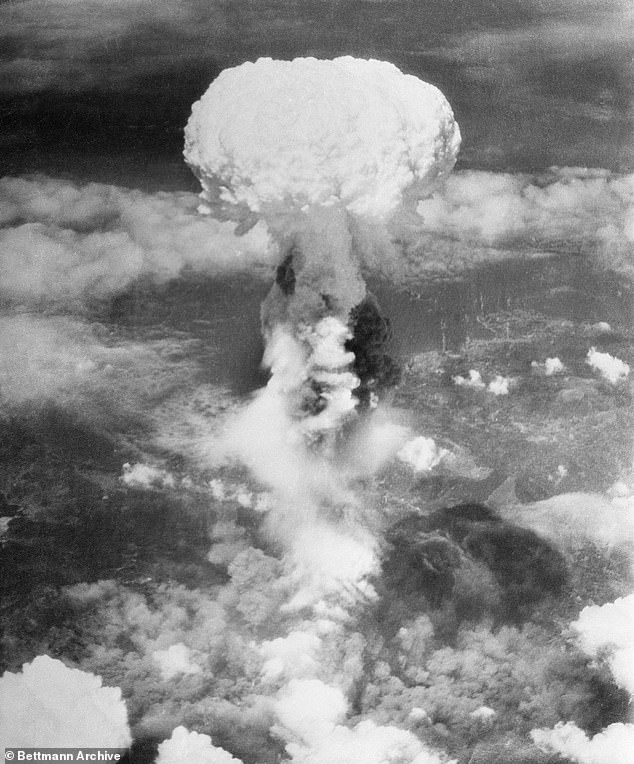 The Greggs and the surrounding neighborhood of Mars Bluff were lucky. The nuclear core of the bomb was reportedly removed and stored elsewhere in the plane, leaving the attacks on Nagasaki (pictured) and Hiroshima the only time nuclear weapons were used on people since the weapons were introduced

But the accident wouldn’t lead to a stop in nuclear overflights, The Daily Beast reported, and they would actually increase in 1960 with the implementation of Operation Chrome Dome, which called for nuclear-armed B-52 bombers to be in the air 24 hours a day.

The government initially offered $44,000 to the Greggs for the damage to their house, and destruction of their garage, Chevrolet sedan, toolshed, clothes and the 6 to 16 free range chickens the family had, some of which were vaporized in the explosion, but they initially declined.

They would take them to court and two years later wind around $54,000. The site of the explosion is now a landmark, and despite the shock and hardship, Gregg was upbeat about the incident.

‘Not too many people can say they’ve had a nuclear bomb dropped on them,’ He told the Sun News. ‘Not too many would want to.’