‘Oink, oink! Are you really eating again?’ Air Force Lieutenant General loses a star after he ‘fat-shamed a female airman and made PIG NOISES at her in front of colleagues’

An Air Force Lieutenant General has been stripped of his third star following an investigation into his professional conduct at The Air Force Sustainment Center in Oklahoma.

According to Air Force Times, the Office of the Inspector General (IG) heard damning evidence against Lt. Gen. Lee Levy earlier this year, including claims from multiple people that he fat-shamed one low-ranking female airman.

The female airman – who has not been publicly identified – told the IG that Levy once embarrassed her by singling her out in front of colleagues and saying: ‘Oink, oink. Are you really eating again?’

On a separate occasion, whilst the pair were traveling in a government car together, the woman claims Levy told her: ‘If you lose a few pounds, maybe the vehicle would have less strain on it.’

He also allegedly told the woman to watch how much she ate as her uniform pants may begin to stop fitting. The female airmen’s testimony was reportedly corroborated by several of her colleagues.

Levy told the IG that he didn’t remember the incidents, and that any comments were ‘part of good-natured give-and-take between the two of them’.

However,  Levy’s lawyer told The Air Force Times on Monday that his client has denied making pig noises and never made comments intended to be demeaning.

Levy left the The Air Force Sustainment Center more than a year ago, before the report by the IG was conducted.

However, he retired earlier this month as a two-star general after being stripped of his third star in light of the report’s conclusion, which stated that his ‘comments were inappropriate, particularly given his position and the public contexts in which they were made.’

Levy was incredibly high-powered, serving as the Air Force Sustainment Center’s Commander, ‘leading nearly 43,000 US and UK airmen to deliver global combat effects’, according to an official military biography.

The woman was only one of Levy’s colleagues who claimed he created a work environment prone to ‘bullying’.

Another female colleague in Levy’s command claimed her mental health suffered because of the general’s conduct.

‘There were a lot of nights when I would come home just in tears,’ the woman told the IG.

She added that she was ‘just absolutely emotionally and mentally exhausted from the work’.

‘After I worked for him and experienced that, it was more of, he’s the boogeyman that you just wanted to run away from’.

Another descried Levy’s work environment as ‘infused with fear and intimidation’.

The general first joined the Air Force back in 1985, going on to build an esteemed career.

The Air Force Sustainment Center, where Levy was based, is responsible for $26 billion in assets, and generates a whopping $16 billion in annual revenue. 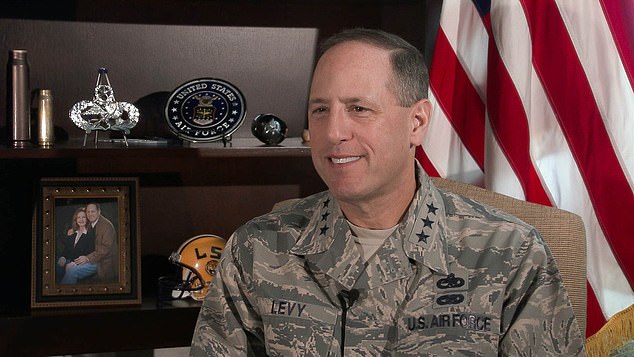 Levy has denied the claims through his lawyer, and says he never made comments intended to be demeaning