It reveals the five worst locations are all outside the ULEZ, which was introduced in April 2019.

It allows the authorities to charge diesel vehicles for being in Central London, with the aim of reducing emissions in some of the city’s most polluted areas.

The zone will be expanded from Central London up to, but not including, the North and South Circular Roads from October 2021.

But the new report raises a ‘red flag’ for government and policy makers as the expansion does not stretch far enough to include areas heavily polluted by diesel emissions, including Brent, Kingston and Southall.

Experts are now calling for ULEZ to be expanded to cover more of the capital and drive down pollution in some of the most deprived areas.

231 sites looked at in the study area. Publicly available data on NOx pollution was sourced from Breathe London

The ULEZ is separate from the Low Emission Zone (LEZ), which applies to commercial vehicles London-wide.

LEZ is set to implement tougher emissions standards for heavy diesel vehicles from October this year.

NOx pollution is a serious concern for health officials and is an umbrella term which includes nitrogen dioxide (NO2), which can lead to health issues like inflaming airways while aggravating existing heart and lung diseases.

London has breached legal limits for NO2 since 2010 and last year it was revealed more than 2 million Londoners are living in areas exceeding legal air limits – including 400,000 children.

As well as NOx, common pollutants from diesel include unburned hydrocarbons, carbon monoxide and particulate matter – microscopic particles of matter.

Diesel vehicles pour out more ultra-fine particles than all other vehicles, which are the most toxic of the air pollution particles.

The International Agency for Research on Cancer (IARC), which is part of the World Health Organisation (WHO), classified diesel engine exhaust as carcinogenic to humans in 2012. 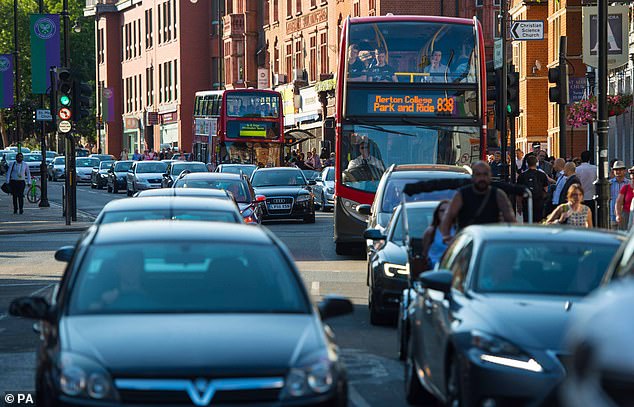 ULEZ is a fee charged to diesel vehicles in Central London, with the aim of reducing emissions in some of the city’s most polluted areas

LONDON SITES MOST POLLUTED BY DIESEL

The top 10 sites most polluted by diesel cars are:

Data modelled for 2019 based on the London Atmospheric Emissions Inventory

‘There is no hiding from the magnitude of pollution from diesel cars. Increasing car ownership and a lack of policy in outer London could leave us in danger of dividing communities,’ said Oliver Lord, head of policy and campaigns at Environmental Defense Fund Europe.

‘Some of the most deprived neighbourhoods are at risk of being left behind in the fight for clean air.

‘We need more ambition at a local level and for the government to give us all the certainty that diesel has had its day, sooner rather than later.’

The dataset used in this study is available on the Breathe London website, which uses sensors to measure harmful pollution at thousands of the city’s locations.

EDF Europe studied data from 231 sites in total, including locations currently within the ULEZ and outside the ULEZ.

Some of those outside the ULEZ will be within the zone after the upcoming expansion.

The dataset was produced by Cambridge Environmental Research Consultants (CERC), who used their software model to estimate the average source-specific hourly NOx concentrations from April 1 2019 to December 12 2019 at sites across London.

Of the top 50 sites for diesel pollution in London, 38 per cent are outside the ULEZ expansion, EDF Europe found.

The remaining 52 per cent will be within the ULEZ under the 2021 expansion plans and only 10 per cent are in the existing ULEZ.

The top five study sites most polluted by diesel cars are all outside the current ULEZ borders – The Broadway in Southall at the top of the list, followed by Cromwell Road in Kingston and Romford Road in the East.

Also in the top five most polluted sites were Putney High Street and Euston Road, at the top of the current ULEZ border.

But out of the top 10 most polluted zones by diesel, three – including Southall in the number one spot – won’t be in the ULEZ after the 2021 expansion.

One of the study locations in the top 10 highest pollution concentrations and the greatest contribution from diesel cars is a site in Wembley in Brent, outside the expansion plans.

Brent is one of London’s most deprived neighbourhoods with poor respiratory health outcomes.

The proportion of young people aged 10 to 18 requiring emergency admission for asthma is over 57 per cent higher in Brent than in England as a whole. 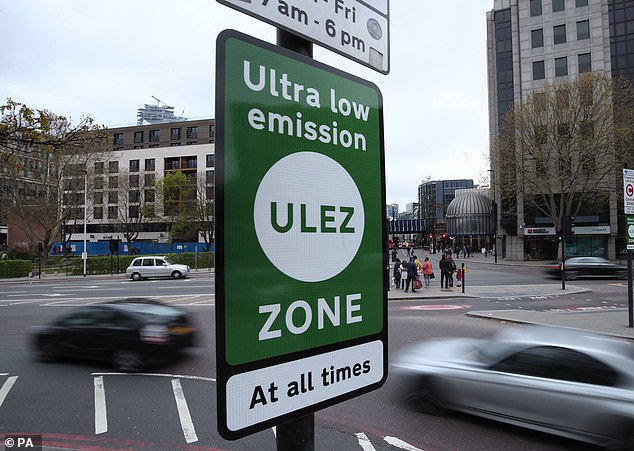 ULEZ will cover central London from 2019, but under the new plans will be extended massively to all of inner London two years later

Mayor Sadiq Khan confirmed that ULEZ will stretch to cover an area surrounded by the North and South Circular roads from October 2021. The ULEZ is separate from the Low Emission Zone (LEZ), which is set to implement tougher emissions standards for heavy diesel vehicles from March 1, 2021

Diesel cars are the dominant source in the dataset in terms of average percentage contribution to total NOx, contributing 19 per cent on average across all monitoring sites in Greater London.

This figure is larger in outer London areas, while the contribution from commercial gas and petrol car sources – including taxis, which are exempt from ULEZ – is lower.

Professor Stephen Holgate, special adviser on air quality at the Royal College of Physicians, said the data provides further evidence that we need incentives to remove diesel vehicles from roads.

‘It is now time that the diesel scandal translates into real change to improve the air we all breathe,’ he said.

‘The public needs incentives to change towards much less polluting vehicles.’

The report also said car ownership in outer London boroughs has been creeping up almost every year to reach its highest level in a decade.

The government has recently consulted on ending the sale of diesel cars, alongside petrol cars and vans by 2035. 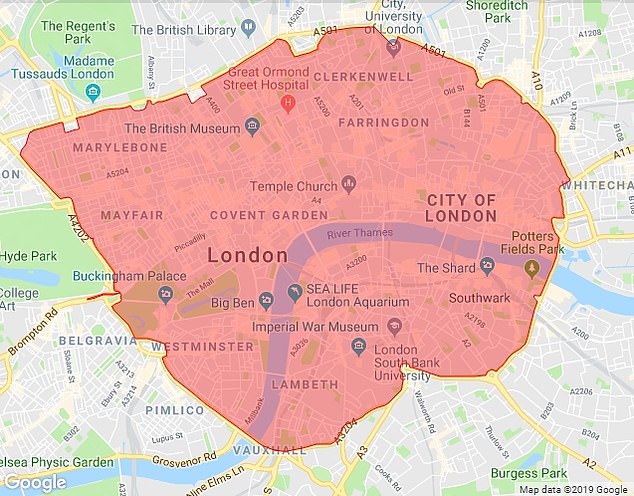 Drivers of older, more polluting cars face paying the £12.50 fee to enter the centre of London. This map shows the current ULEZ. Euston Road runs along the top 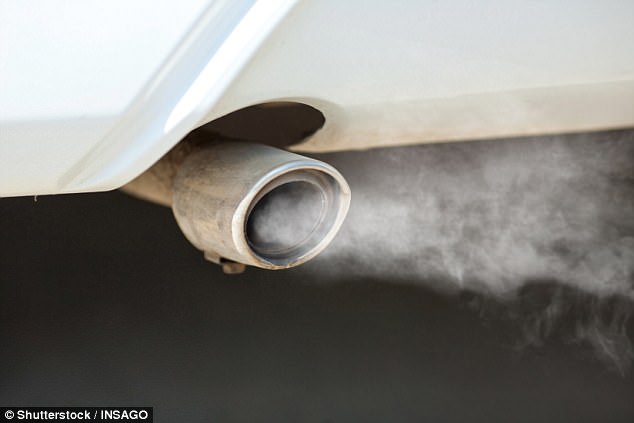 But EDF Europe is urging the government to bring forward this date to 2030 so that Brits ‘can breathe cleaner air sooner’.

As electric car sales increase, support should be targeted at or prioritised towards lower-income households, they add.

Examples include the Clean Vehicle Rebate Program in California, zero-interest loans in Scotland and London’s vehicle scrappage scheme in London.

Zak Bond, policy officer at the British Lung Foundation, said: ‘Breathing in dirty air is bad for everyone’s health but can be particularly dangerous for those living with lung conditions.

‘A spike in air pollution levels can lead to symptoms getting worse, flare-ups and even the risk of hospitalisation.

‘Now, more than ever, we need to protect everyone’s lungs, so we must improve air quality urgently.

‘It is clear that bringing forward the date for the end of the sale of petrol, diesel and hybrid cars and vans to 2030 is a vital step towards getting the most polluting vehicles off the road and thus improving the quality of life for people with a lung condition.’

It was revealed in August 2019 that one in four motorists driving older vehicles through London has been stung by the ULEZ, prompting calls to halt similar schemes being rolled out around Britain.

Almost 130,000 drivers fell foul of the new charges – levied against vehicles that don’t meet the required Euro 6 emissions standards – since their introduction, as Transport for London raked in about £26 million in levies and penalty charges.

ALL YOU NEED TO KNOW ABOUT THE ULEZ

The ultra-low emission zone (ULEZ) was introduced in London in April 2019. Here are some of the key questions around the scheme:

What is it?  The ULEZ is a way of charging vehicles which emit the most nitrogen oxide for entering parts of London.

When does it apply?  The daily charge runs from midnight to midnight every day.

Where is it happening?  The scheme is initially within the same area as the congestion charging zone, before being expanded to within the North and South Circular roads from October 2021.

How much does it cost to enter the zone with an older vehicle?  It costs £12.50 for most vehicle types, including cars, motorcycles and vans. Heavier vehicles such as lorries, buses and coaches are liable for a £100 charge.

How can I avoid the charge?  To be exempt from the Ulez charge, petrol cars, vans and minibuses must meet the Euro 4 emissions standard and diesels must meet Euro 6. That means the oldest cars that can be driven in central London without paying are roughly a four-year-old diesel model or a 13-year-old petrol model.

What if I don’t know my vehicle’s emissions standard?  Drivers can check whether their vehicle is liable for a charge by entering its registration on the Transport for London website.

Why was ULEZ introduced?  London mayor Sadiq Khan says the scheme will improve the capital’s air quality, which he says is responsible for thousands of premature deaths and other serious conditions.

Has there been any opposition to the scheme?  Conservatives on the London Assembly claim Mr Khan’s decision to introduce the scheme earlier than planned could catch out some motorists – particularly those from the poorest households – who have not already upgraded their vehicle to a newer model. They also warn that expanding the zone to the whole of inner London will not effectively tackle pollution and will affect people and businesses in areas with low pollution.

What vehicles are covered by ULEZ?

It’s not just cars and vans that will be subject to extra charges in London.

These ULEZ non-compliant vehicles will also be impacted: