A union that represents thousands of U.S. air traffic controllers filed a lawsuit against the federal government on Friday claiming its failure to pay the workers during an ongoing partial government shutdown could endanger the safety of passengers.

The National Air Traffic Controllers Association said that depriving workers of pay violates their constitutional rights and a federal wage law in a lawsuit in federal court in Washington D.C.

‘America wants its air traffic controllers to be laser-focused on landing planes safely and monitoring America’s runways, not distracted by financial issues and anxiety of financial instability,’ the union said in the lawsuit.

The lawsuit is at least the third filed by a union on behalf of federal employees who have not been paid during the shutdown, which began Dec. 22.

The National Air Traffic Controllers Association said that depriving workers of pay violates their constitutional rights and a federal wage law in a lawsuit in federal court in Washington D.C. 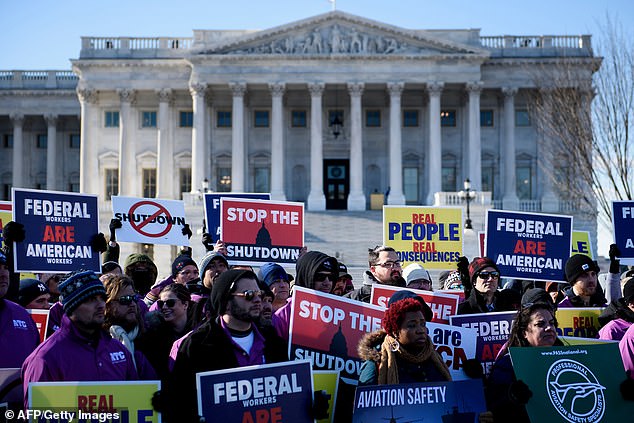 Protest: Air traffic control union members were among those who demonstrated on Capitol Hill Thursday over going without pay during the shutdown 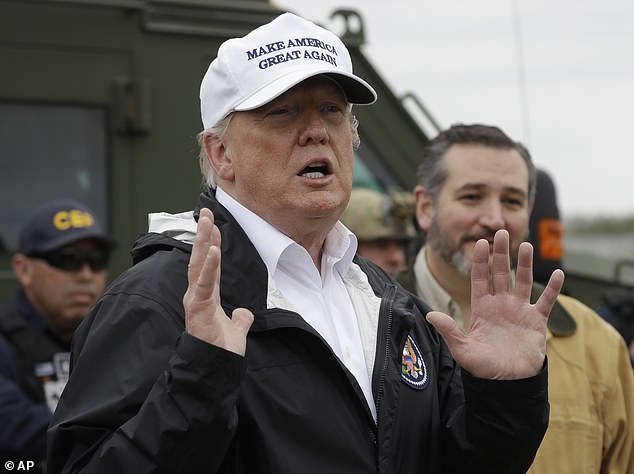 All on the wall: Trump is refusing to sign any bill to fund the government unless it gives him $5.7 billion for his wall

The suit came as federal workers received pay stubs Friday with nothing but zeroes on them as the effects of the government shutdown hit home, deepening anxieties about mortgage payments and unpaid bills.

All told, an estimated 800,000 government employees missed their paychecks for first time since the shutdown began three weeks ago.

Fuming employees posted pictures of the $0 pay stubs on Twitter and vented their frustration as the standoff entered its 21st day. This weekend, it will become the longest shutdown in U.S. history.

Some Democratic lawmakers seized on the empty pay stubs as a way to renew criticism of President Donald Trump, who triggered the shutdown over his demands for funding for a border wall.

Sen. Tim Kaine of Virginia tweeted: ‘It should be payday for hundreds of thousands of federal workers. But thanks to Trump, many are actually getting pay stubs like this. He’s treating them like the countless contractors he stiffed throughout his business career.’

Roughly 420,000 federal employees were deemed essential and are working unpaid.

An additional 380,000 are staying home without pay. While furloughed federal workers have been given back pay in previous shutdowns, there is no guarantee that will happen this time.

The head of the U.S. Secret Service, which is responsible for protecting Trump, warned employees that financial stress can lead to depression and anxiety. ‘Keep an eye out for warning signs of trouble,’ Director R.D. ‘Tex’ Alles wrote in a memo seen by Reuters.

Vice President Mike Pence said Trump will sign legislation passed in Congress that will provide back pay to federal workers once the government reopens.

‘Your families will get your paychecks,’ he told U.S. Customs and Border Protection officers at the agency’s Washington headquarters.

Separately, Senator Rob Portman and eight other Republican senators introduced legislation that would permanently outlaw the closing of government operations during budget fights, underscoring the growing frustration in Washington.

During his presidential campaign, Trump repeatedly pledged that Mexico would pay for the wall, which he says is needed to stem the flow of illegal immigrants and drugs. But the Mexican government has refused and Trump is now demanding that Congress provide $5.7 billion in U.S. taxpayer funding for the wall.

Democrats in Congress call the wall an ineffective, outdated answer to a complex problem.