Economy passengers have long wondered what goes on at the front of the plane.

What the seats are like, what facilities first class passengers have access to, the standard of the food and whether you can actually sleep more comfortably are often pondered – and fantasised about.

To provide some concrete answers travellers who have been lucky enough to bag a seat in first class have been revealing exactly what the experience is like on an internet forum, from being offered pyjamas, to being able to shower before landing. Though not everyone thinks it’s worth the outlay.

The online discussion came after a thread was started on internet forum Reddit about flying on the most expensive tickets.

Forum user locks_are_paranoid asked the forum: ‘Redditors who’ve flown first class, what are the people in coach missing out on?’

And for most people, having more legroom and space as well as the more calming environment is the biggest difference from flying economy.

One Redditor explained: ‘My stepdad worked for an airline when I was growing up, so I got to fly first class a number of times.

‘Aside for the most obvious thing, more room, there was something better. Peace and quiet.

‘Because first class passengers aren’t packed in like sardines, there’s a sense of calm in that part of the aircraft.’

He said: ‘The biggest difference has to be the feeling of total separation; you’re in one of the quietest, most serene environments possible while 35,000ft in the air with completely personalised service.’

Traveller 9a_ praised the ability to sit crosslegged in seats while thismydallasaccount also said the quality of the seat was the biggest difference. 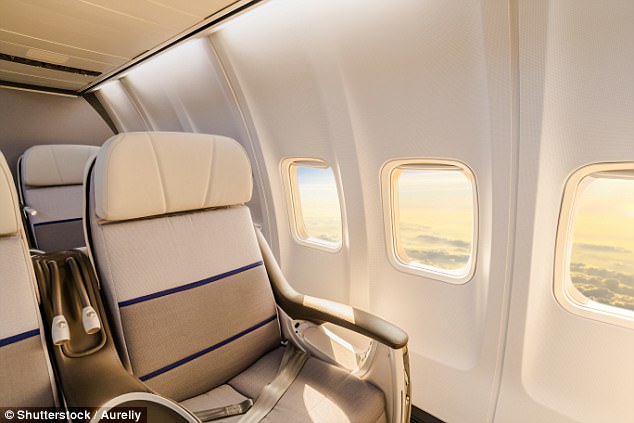 For most people, having more legroom and space as well as the more calming environment is the biggest difference from flying economy

And he added: ‘People in first class have flown before. They don’t do weird s***. They don’t annoy you with small talk. They don’t reach over you to open the window. They sit in their chair and mind their own business.’

Meanwhile other people commenting on the thread said the little added perks were what made first class so much better.

Verystormy wrote: ‘I used to fly Emirates first. You board and your seat will have a pair of pyjamas waiting for you. You press a button and it seals itself off into a little private room which you can get undressed in.’

While also praising Emirates’ premium service, my-pw-is-password added: ‘Taking a shower at 40,000ft, having gourmet meals, alcohol always flowing, having less noise around you, getting chauffeured to and from the airport, being able to actually lie down flat, having a separate lounge area from your seat.’

BingoBingo1999 said they enjoyed the noise cancelling headphones the most, while Dixnorkel added: ‘The food is usually way better too, and you get unlimited service on drinks. I usually tried to get hammered whenever my dad got us upgrades on his work trips.’

Fellow traveller duncan_D_sorderly also said the food was much better, saying: ‘With Air France they had an on-board chef to individually make the meals, was a surprise to be asked how I wanted my filet steak tournedos cooked.’

And the angry_norwegian was most impressed by something completely different.

He explained: ‘The feeling of superiority as you mean mug [stare down] all the coach passengers walking past you.’

But for Makerbot2000, it’s not just the private boarding, fine fining, real linen and silverware, flat beds, free toiletries, sleep suits and superior entertainment systems that are better than coach. 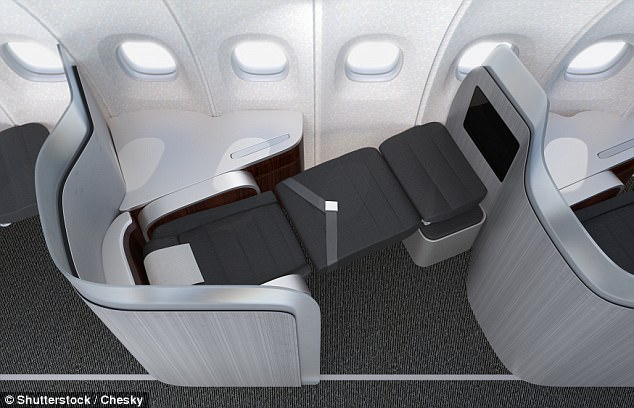 Most first class cabins have seats that go totally flat and transform into beds. But not all passengers say first class is worth the money

He added that even on the ground, the first class experience is totally different.

He explained: ‘Exit is private and escorted to fast track area to clear customs.

‘First class lounge serves everything you can imagine, as well as showers and quiet sleep areas.

‘I weep every day I don’t get to fly like this for work anymore.’

And Texastexastexas1 added: ‘Same. I had it for years and I lost it. Now I quietly weep in back with everyone else.’

However, not everyone was impressed with the first class experience, with some even saying it was not worth the money.

One Redittor b1ndvision explained: ‘On most flights? Not much, to be honest. Free drinks, hot towel, more room. Real glasses rather than cheap plastic cups.’

While MakerGrey added: ‘Honestly, it’s just okay. It’s not that first class is awesome, it’s that coach is so terrible. Thirsty? Have a cocktail. Sit in first and they’ll hang your coat and put your carryon in the bin.

‘You can sit without your a** falling asleep, and stretch your legs. You never have to fight over an armrest. They feed you. When they ask you what you’d like to eat, the attendants address you by name.

‘Does calling me Mr. Makergrey mean that much? No. The gas company calls me that.’

And pw_is_my_password said: ‘If you’re just flying domestic or not on a fancier airline, then first class probably isn’t that different from coach – mainly just nicer seats.’