Last orders for airports that act like nightclubs: Binge drinking is fuelled by double measures of spirits sold as standard in pubs and bars, say airlines

Airports were last night accused of fuelling binge drinking by serving double measures of spirits in their bars and pubs as standard.

Furious airline bosses said many airports now resemble ‘happy hour’ at a nightclub – even at 7 in the morning.

An audit by the Mail has revealed air-side bars and restaurants at airports including Liverpool, Newcastle, Bristol and Manchester serve 50ml ‘doubles’ when a customer orders a spirit such as whisky or vodka.

Many bars, including those at London Heathrow, Gatwick and Luton, only display prices for large glasses of wine – between 175ml and 250ml – equivalent to a third of a bottle. Licensing laws do not apply to bars and restaurants in the departure lounges of airports, which means passengers can buy alcohol from as early as 4am and throughout the night.

Emma Yates and her excited friends shared the photograph with the words: ‘Benidorm are u ready for us crazy girls?’ By the time their Ryanair flight had touched down at Alicante several hours – and drinks – later, fellow passengers and the crew had enough of their antic (see story below)

However, catering firm SSP, which operates bars including the Cabin at Manchester, Liverpool and Newcastle airports, said it automatically offers double measures of spirits and larger servings of wine because it is what customers want. They also said their bar staff are trained to offer smaller measures when the customer orders their drinks.

Hen party friends who caused havoc on their flight

Posing unsteadily at a bar at Liverpool Airport ahead of a Spanish hen party, Emma Yates and her excited friends shared the photograph with the words: ‘Benidorm are u ready for us crazy girls?’

By the time their Ryanair flight had touched down at Alicante several hours – and drinks – later, fellow passengers and the crew had enough of their antics. To boos and applause from fed-up holidaymakers, the group were escorted off the jet by police after allegedly spending the evening flight screaming, swearing and downing more drinks.

In response to criticism of their behaviour, Miss Yates wrote on Facebook: ‘Yes we was drunk… yes we was embarrassed but eh a group of girls on holiday having fun…’

At the time of the incident in July 2017, Ryanair said it had passed the matter on to the Spanish authorities, but Miss Yates was soon uploading selfies while sunning herself by the pool in Benidorm.

Airlines UK, which represents carriers such as British Airways and Virgin, said airport bars were fuelling a rise in bad behaviour in the air. Figures from the Civil Aviation Authority show that 422 serious incidents were reported in 2017, the joint highest number on record. The figure has doubled since 2014. A spokesman for Airlines UK told the Mail that the routine sales of ‘doubles’ in mixers and cocktails was ‘worrying and irresponsible’.

He said most customers would not know they were receiving a double measure, adding: ‘It’s the kind of thing you might expect in a nightclub during happy hour.’ He said it would promote accidental ‘excessive consumption’.

The spokesman urged airports to ‘urgently rethink’ selling larger measures as standard, adding that ‘they tell us they’re taking the issue of drunk passengers seriously but this rings hollow when practices like this are uncovered’.

But airports hit back, saying airlines heavily market alcohol offers on board and only want to curb drinking at airports to boost their own sales. A senior airport source said: ‘Not only do airlines serve similar measures as airports do, they also heavily market multi-buy offers on wine, beers and spirits. Given all this, it looks like their concerns over drinking in the airport are driven by commercial interests rather than a genuine concern about excessive alcohol consumption or disruptive behaviour.’

The row has come to a head amid growing concerns over the abusive and sometimes violent behaviour of drunken passengers, which has caused flights to be diverted. Drunken air passengers can be jailed for up to five years for endangering the safety of aircraft – and it can result in an £80,000 fine if the plane has to divert.

Ministers are considering plans to ban retailers from selling alcohol before 10am, bringing an end to the tradition of the early morning pint – popular with stag and hen parties. A Home Office spokesman said ‘disruptive or drunk behaviour’ is unacceptable. An announcement is expected within the next fortnight. 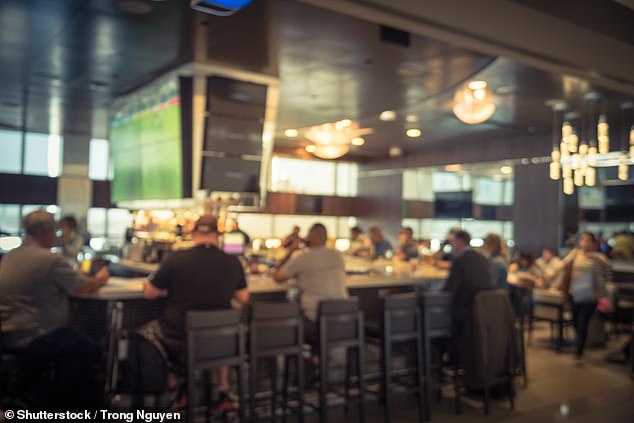 A spokesman for the Airport Operators Association, which represents UK airports, said airlines offer the 50ml measures as standard – without the option of smaller servings

Labour MP Wes Streeting backed calls for tougher rules and an end to ‘nightclub-style’ promotions. He said: ‘Lots of us enjoy a pint or glass of wine at the airport at the start of a holiday. No one wants to be a killjoy, but there is a difference between having a drink and getting smashed.’

A spokesman for the Airport Operators Association, which represents UK airports, said airlines offer the 50ml measures as standard – without the option of smaller servings.

He added that airports have banned shots in bars and restricted the sale of miniatures in duty free to control incidents.

A spokesman for Bristol Airport said anti-social behaviour is not accepted by them or airlines.

Newcastle International Airport said: ‘Instances of alcohol-related disruptive behaviour at the airport are rare and going down year-on-year.’