Airports, trains and roads set for Xmas chaos on Friday

Britons are braced for congested roads, packed trains and huge airport queues as they try to make a Christmas getaway on Frantic Friday.

Leisure journeys in the run-up to Christmas will peak at 1.87million on Christmas Eve, but December 22 is expected to see the worst delays as commuters battle for road space with 1.25million motorists visiting friends and family.

Some 260 engineering projects on the railway will also disrupt journeys. Many of Britain’s mainline routes will be partially shut as Network Rail carries out its biggest ever Christmas investment programme.

And Europe’s busiest airport, London Heathrow, will see 250,000 people pass through on Friday – the equivalent of almost two per second – during its opening hours. Some 67,000 people will jet off from London Gatwick.

Manchester Airport is also expected to have its joint busiest day on Friday, while Eurostar trains from London St Pancras to Brussels and Paris will carry 34,000 passengers on the same day. 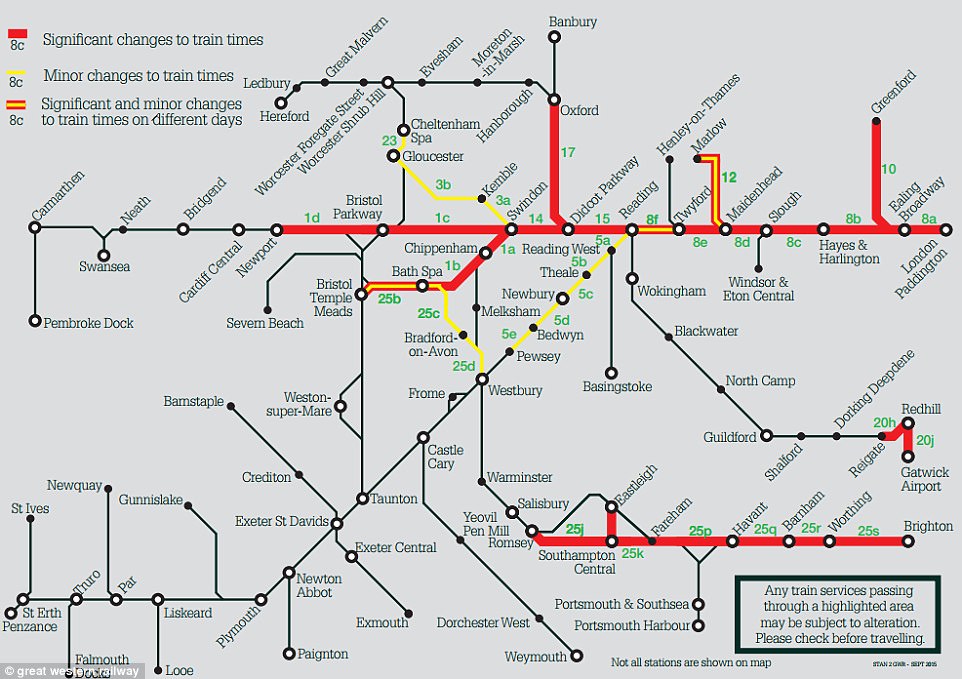 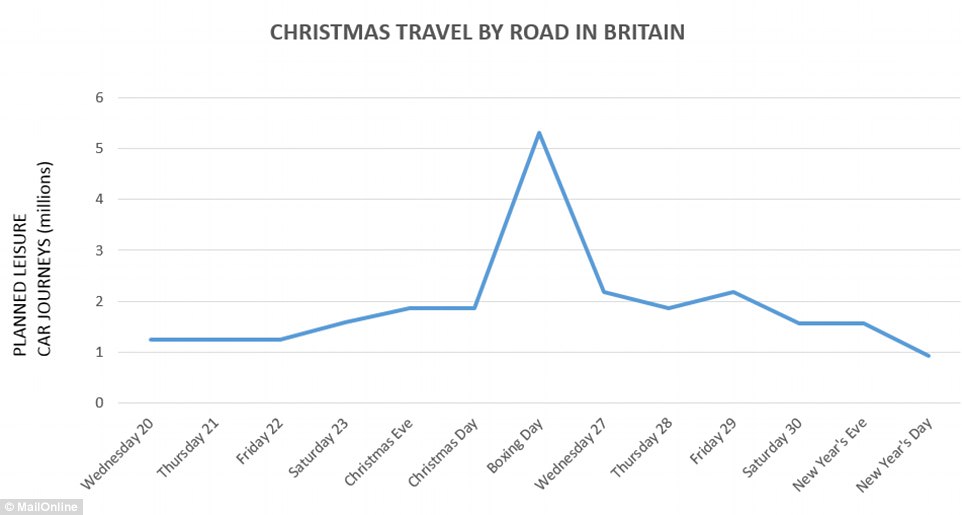 Drivers are being urged by the RAC to avoid travelling on ‘Frantic Friday’ when the last of the year’s commuter traffic will clash with the Christmas getaway. The worst hold-ups are expected to occur between 4pm and 8pm.

Some 11.5 million leisure trips are being made by car between December 17 and Christmas Eve, but this will be eclipsed by the 17.5 million between Christmas Day and New Year’s Day as people shop in post-Christmas sales.

Worst times to travel this Christmas

Driving will cost more this winter as rising fuel prices mean a typical family petrol or diesel car is around £3 more to fill up compared with 2016.

RAC traffic spokesman Rod Dennis said: ‘Things tend to get worse on the last working day before Christmas, with ‘Frantic Friday’ this year falling on December 22. We strongly urge drivers planning long journeys to avoid this day if they possibly can.

‘We’re then expecting pre-Christmas leisure trips to peak on Christmas Eve, with getaway traffic combining with the inevitable dashes to the shops for last-minute Christmas presents.’

Almost 400 miles of roadworks will be lifted by Highways England to ease journeys. The ‘roadworks embargo’ will be in place on motorways and major A roads from 6am on Friday until 12.01am on January 2.

Southeastern, which serves London, Kent and East Sussex, will not be able to run trains to London Bridge, Charing Cross and Cannon Street between Saturday and January 1 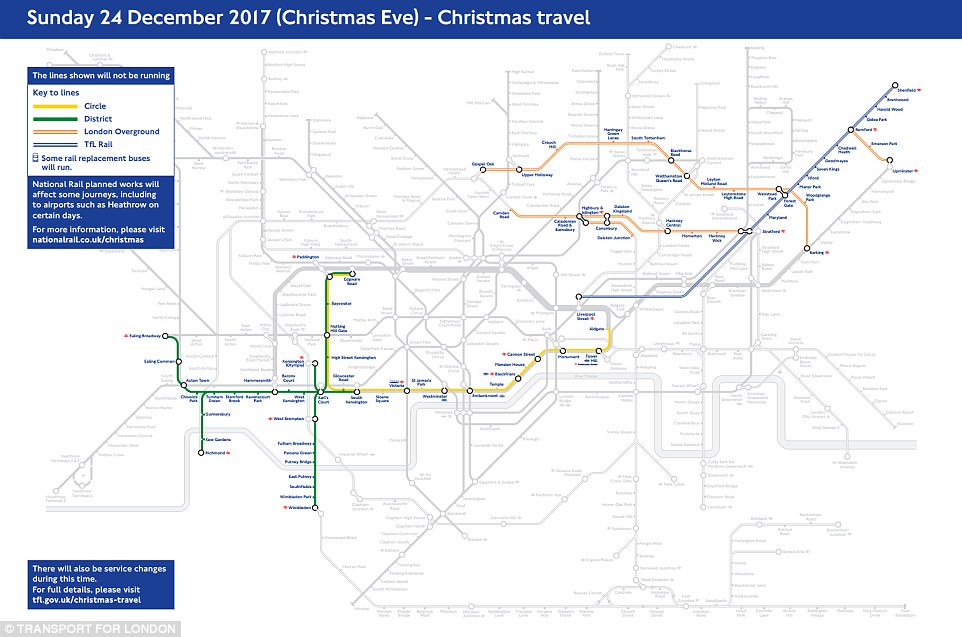 Christmas Eve will bring closures to the District and Circle lines, as well as TfL Rail and sections of the London Overground The District, Circle and Waterloo & City lines will not run on Boxing Day, as well as various parts of the London Overground

But the number of cars on the road could be even higher than normal due to a series of strikes by rail workers which threatens to reduce services on a number of days throughout the festive period. 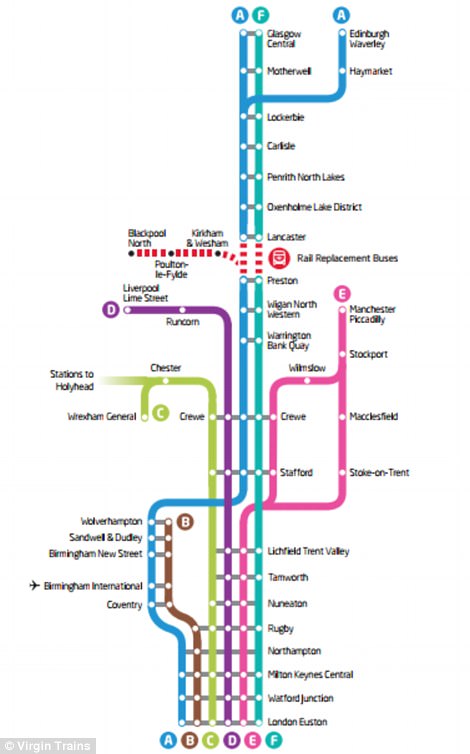 Buses will replace trains between Preston, Blackpool and Lancaster on Christmas Eve on the Virgin West Coast line

On the trains, Great Western Railway is urging passengers to complete journeys by Saturday ‘at the latest’ as London Paddington will be closed between Christmas Eve and December 27.

The West Coast main line will be halted between Preston and Lancaster from Christmas Eve to December 27, with buses replacing trains.

Passengers travelling between London and Glasgow during this time are advised to go via Edinburgh, adding around an hour to journeys.

Southeastern, which serves London, Kent and East Sussex, will not be able to run trains to London Bridge, Charing Cross and Cannon Street between Saturday and January 1.

Network Rail chief executive Mark Carne said: ‘We know that our railway is up to 50 per cent quieter than usual during the festive period so taking on and delivering these huge transformational schemes at this time of year minimises our impact on passengers.’

It is adding nearly 30,000 extra seats to services between Monday and January 2, with Christmas Day bookings up by almost a quarter on last year.

The average Briton travels 184 miles to visit family and friends over the festive season, and 50 miles for Christmas shopping – with more than half making between five and ten visits to the shops, according to an Arriva survey.