Undoubtedly this season’s feelgood story, gallant Ajax are by no means done yet. That barmy night in the Bernabeu may not be the pinnacle after all.

Juventus endured a scare in Amsterdam, muted by Dutch vibrancy on a night that showed this exciting young team are not merely satisfied with registering a first quarter-final in 16 years.

Ajax head for Turin next week with something to hold and that represents a far more manageable task than against Real Madrid in the previous round. We all know what happened there. 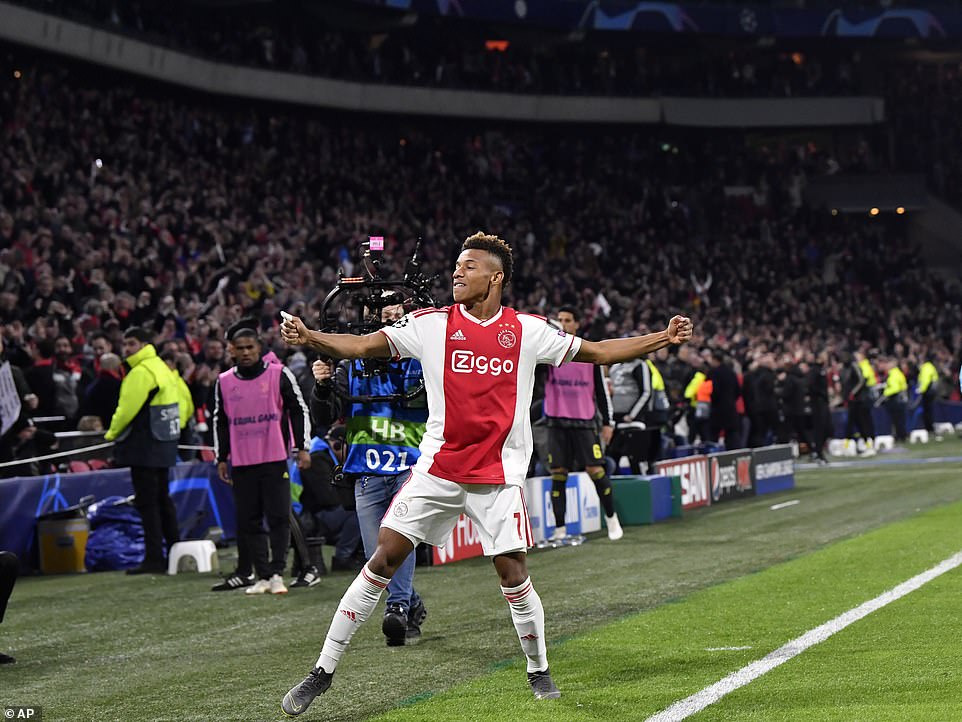 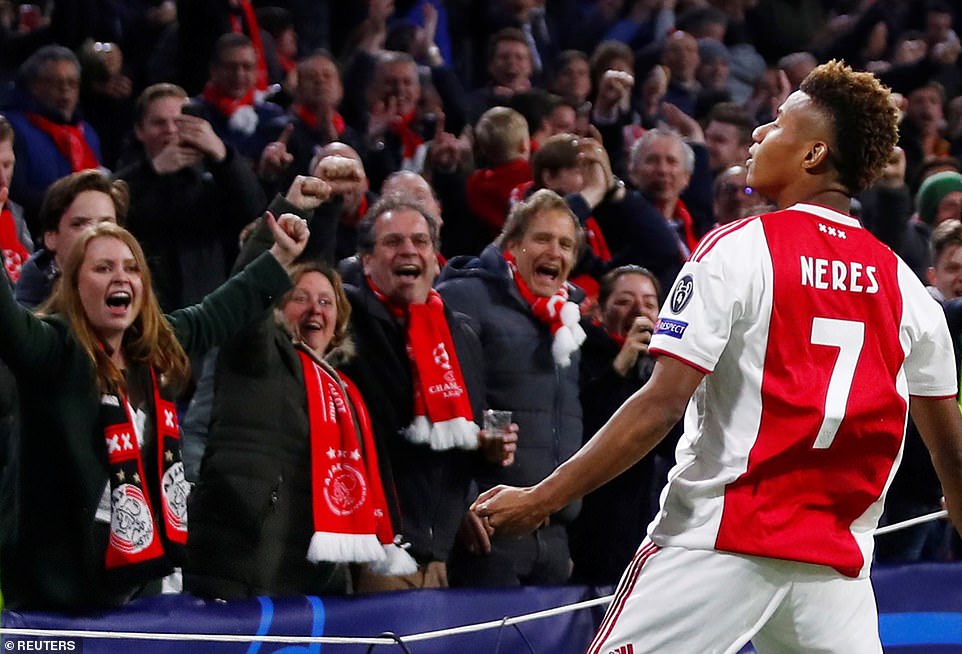 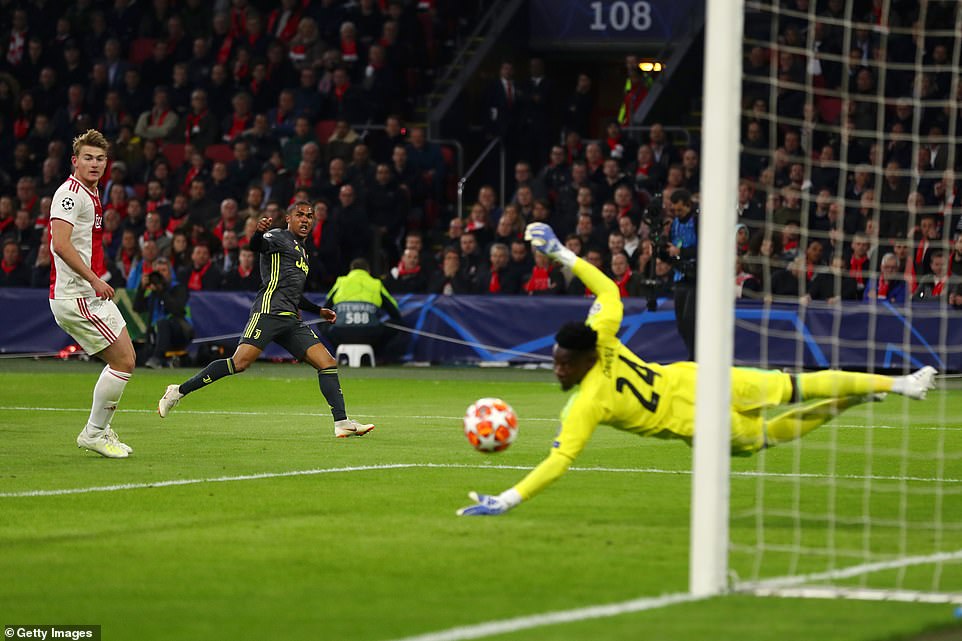 Winger Douglas Costa went agonisingly close to restore the lead for the away side, but hit the post after a skillful run

That they continue to compete is a triumph for the way they are attempting to narrow the financial gap.

This team will disband in the summer, with Frenkie De Jong off to Barcelona and the imperious 19-year-old captain Matthijs De Ligt also likely to depart.

Erik ten Hag’s Eredivisie leaders are only enjoying this ride together for a few more weeks – but will take great heart by how they responded to adversity.

Cristiano Ronaldo had barely touched the ball before he rolled one out to Joao Cancelo and galloped towards the home box.

Juventus were moving, turning the Ajax midfield around and, seconds before half-time, Cancelo surveyed his surroundings to find Ronaldo having got the run on De Jong.

A perfectly-weighted clip, a trademark Ronaldo flying header and Juventus were somehow ahead at the break.

His numbers are frightening, this the striker’s 125th Champions League goal and his 41st in the quarter-final stage alone.

Ajax were magnificent before and after that. They are chaotic, a blur going forward, and had Juventus penned in for so long. 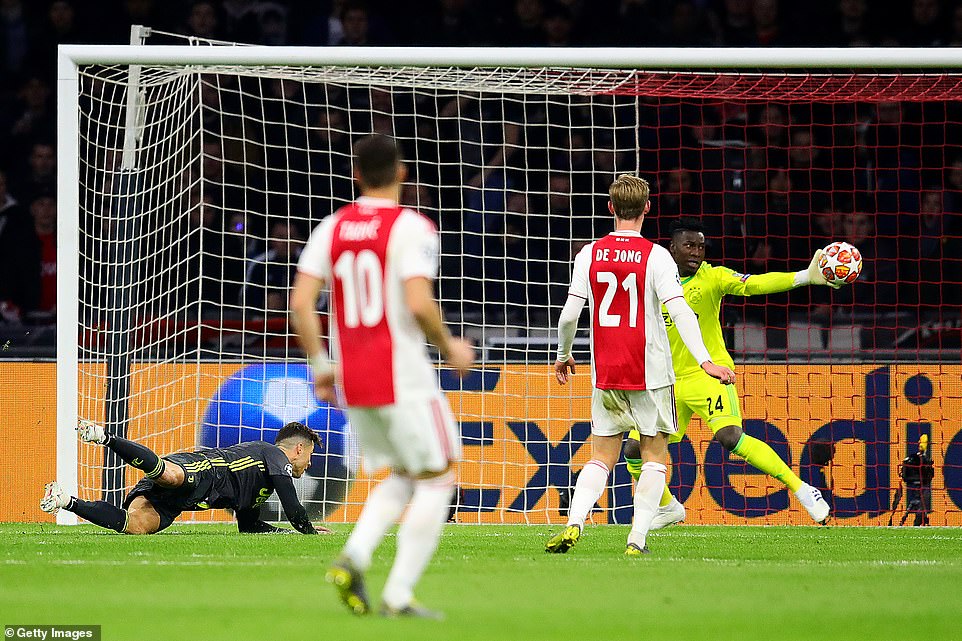 Earlier, Juve talisman Cristiano Ronaldo had timed a perfect run to arrive in the area and connect with Joao Cancelo’s cross 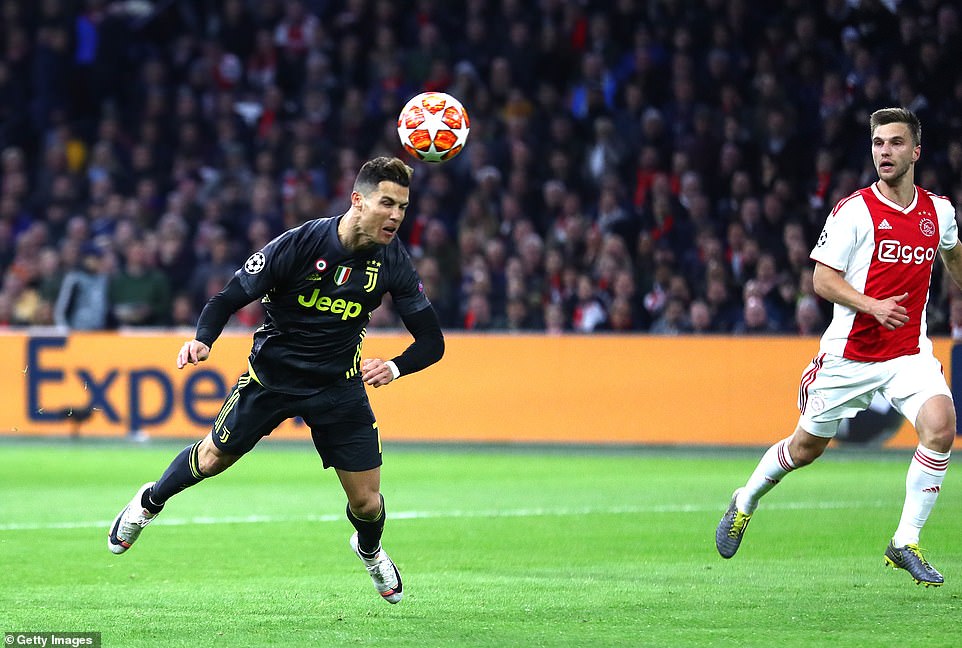 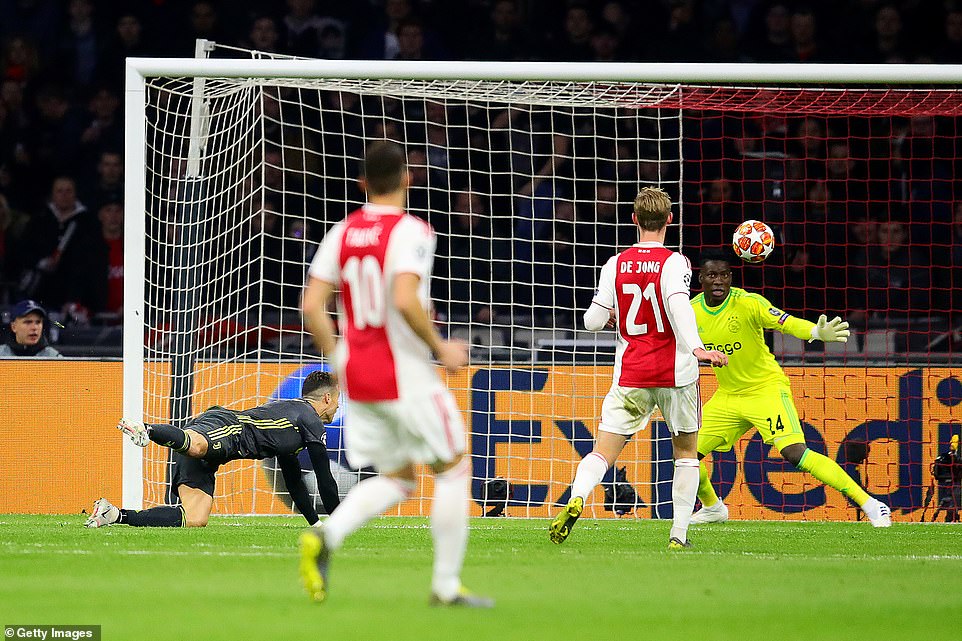 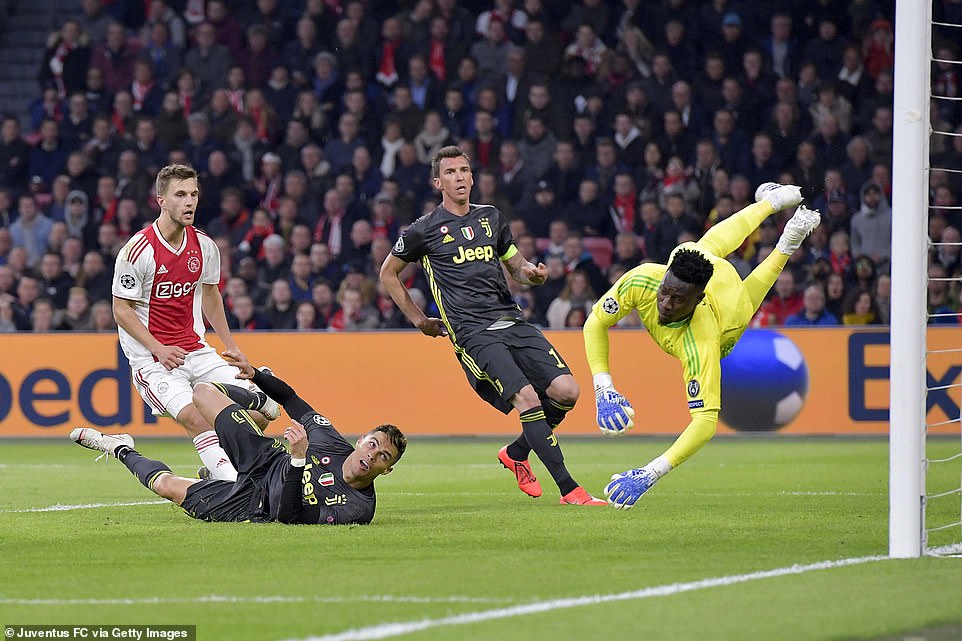 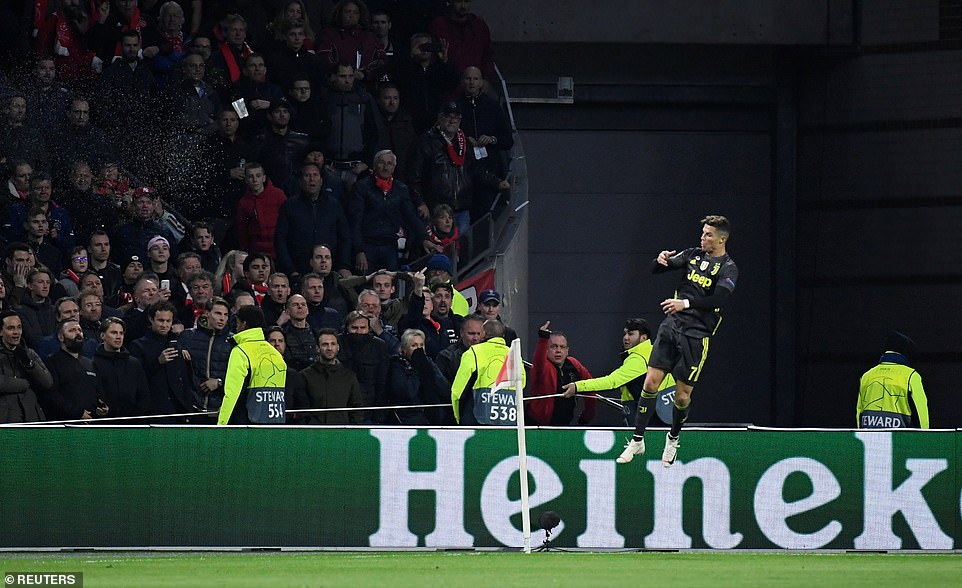 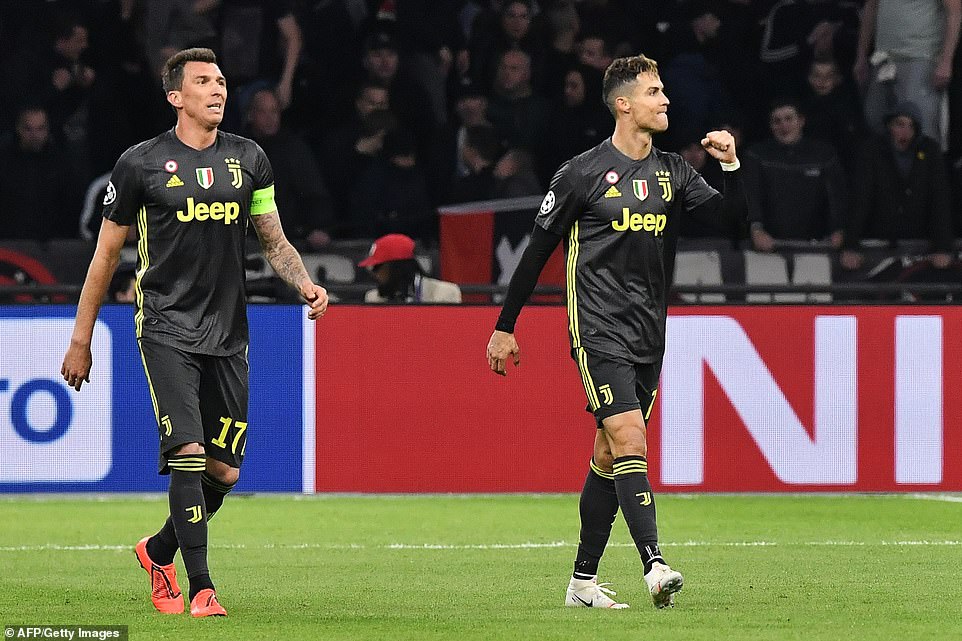 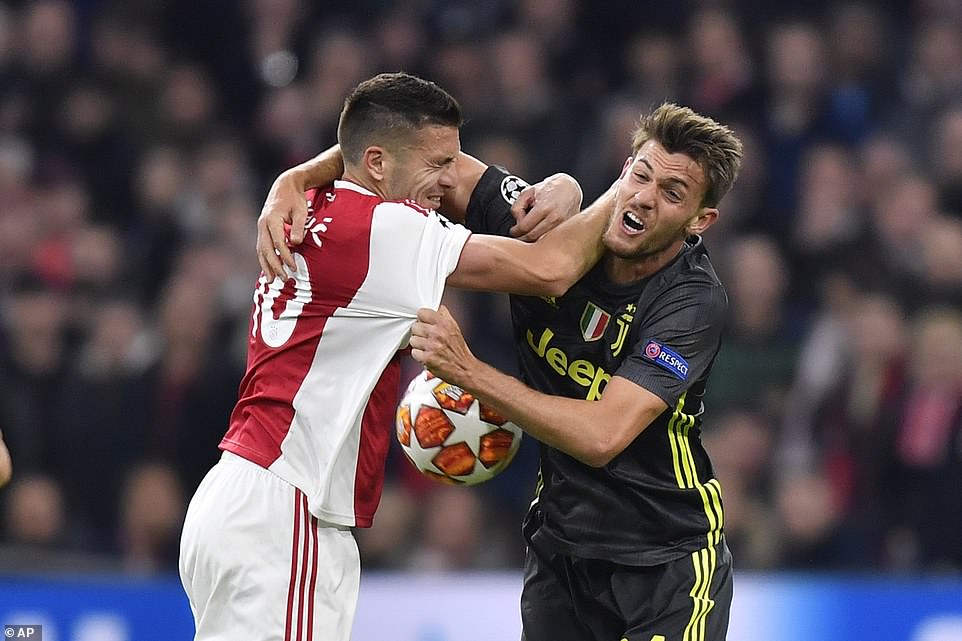 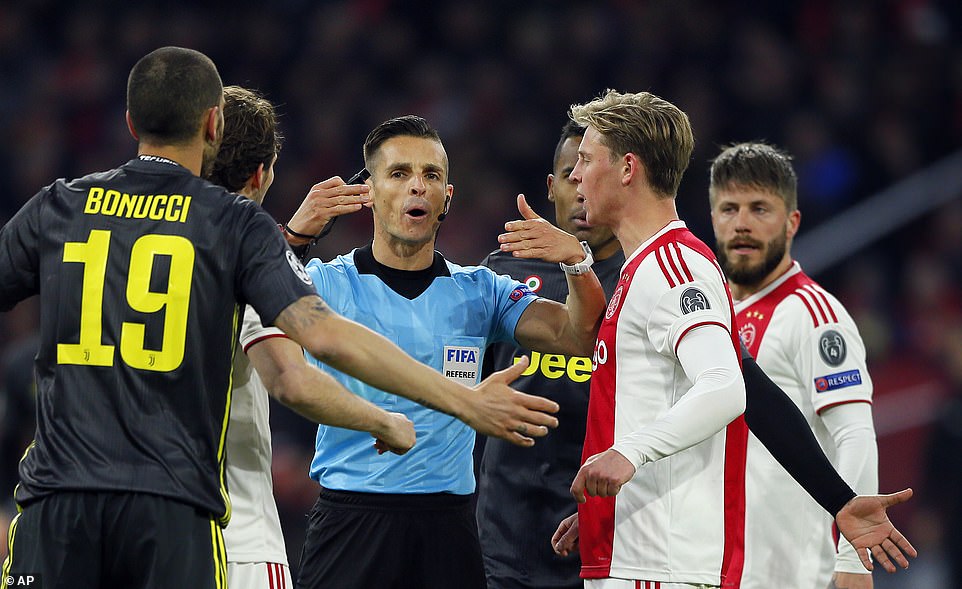 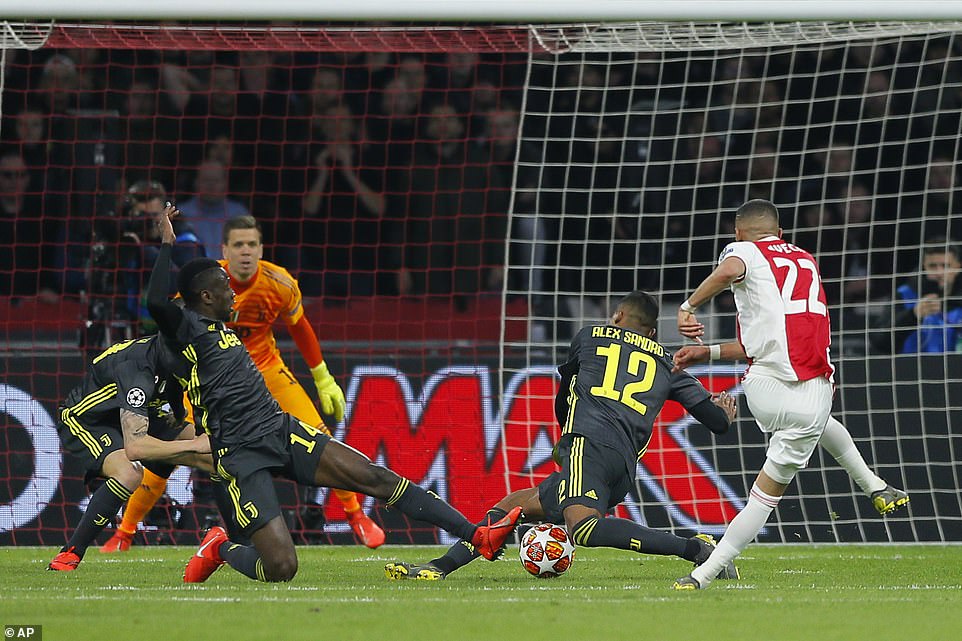 Ajax crafted plenty of their own opportunities, with Hakim Ziyech going close as they dominated on the possession front

It is that sort of belief and ingenuity that prompted a stunning equaliser just 30 seconds after the break and straight from kick-off.

Juventus’ only touch came as Cancelo miscontrolled and David Neres made him pay, twisting and turning before bending into the top corner.

The least Ajax deserved – and it could have been better but for Szczesny thwarting teenager Jurgen Ekkelenkamp late on. Douglas Costa also thumped a post as Juventus almost unjustly silenced the Johann Cryuff Arena on the break.