Akshata Sunak debuted a very stylish jumper in the wholesome Christmas card shared by the Prime Minister ahead of the holidays.

The mother-of-two, 42, wore a £105 jumper from the French label Sézane for a family baking session with her daughters Krishna, 11, and Anoushka, nine, snapped at 10 Downing Street.

In the joyful picture, the PM, 42, can be seen mixing some cookie dough in a bowl while his two daughters add some ingredients. Akshata, who is holding a bag of chocolate chips, is seen laughing along.

The card bared the message: ‘with best wishes for Christmas and the New Year.’

Akshata Sunak, 42, debuted a very stylish £105 jumper from the French label Sézane in the wholesome Christmas card shared by the Prime Minister ahead of the holidays. The snap shows the PM and his wife baking cookies with their daughters Krishna, 11, and Anoushka, nine

While the Prime Minister is seen wearing his trusted blue sweater in the picture, his stylish wife opted for a bolder look, with a multi-coloured jumper.

The number, which comes with a flattering round neck, is beige with spots of red, blue and brown.

According to the label, the Julion Jumper from Sézane is made of a cosy blend of wool and kid mohair.

The mother-of-two kept the look low-key for her baking session, and wore it with a pair of blue trousers and without accessories. 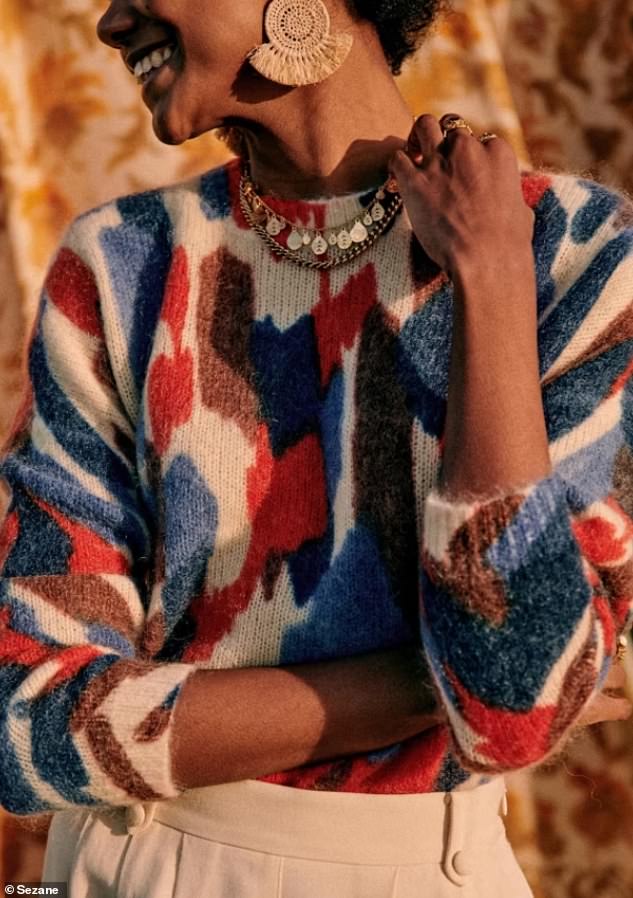 According to the designer, the mulitcoloured number is made of woolen and kid mohair. Akshata wore the beige number with brown, blue and red touches

She styled her silky black hair loose in a luscious blow-dry and wore a natural makeup for this pictured family moment.

Meanwhile, her youngest daughter Anoushka looked darling in a white sweater and pink corduroy dress, while her eldest looked studious as she mixed some Gold Syrup into the mix, wearing a denim blue shirt.

It comes as it emerged the Prime Minister made surprise calls to public servants thanking them for their selflessness. He spoke to diplomats in Pakistan, Somalia and Ukraine as well as a Royal Navy ship in Antarctica, telling the crew their work demonstrated the best of Britain overseas.

In a break with tradition, the PM made the calls from No 10 rather than broadcasting a festive message.

The Prime Minister made apparently surprise calls to four workers and the crew of a naval ship to express his gratitude for their ‘sacrifices’ after an ‘extraordinary year’.

Footage of the messages published on Friday comes during a Christmas being strained by widespread public sector walkouts hitting the NHS, the postal service and transport networks.

Labour leader Sir Keir Starmer used his Christmas message to reflect on the struggle of the Ukrainian people.

Mr Sunak’s two months in office were first characterised by trying to rectify the economic chaos created by his predecessor Liz Truss and now by a wave of industrial action.

Royal Mail strikes disrupted deliveries of Christmas cards and presents, while strikes on the railways and by Border Force were affecting journeys home.

Armed forces personnel were being paid £20 bonuses for standing in for striking workers.

Nurses are planning walkouts on two consecutive days next month, adding to the pressure on the health service being compounded this winter by both the nursing strikes and action from ambulance staff.

By calling the HMS Protector crew and diplomats in Pakistan, Somalia and Ukraine, and a holiday activities and food programme in London, Mr Sunak was seeking to portray the value he places on public service.

In a statement, he said: ‘Whether you are working in Mogadishu or Milton Keynes this Christmas, I want you to know that I am personally grateful for your sacrifice.

‘This year has been an extraordinary year for so many reasons, but most of all, it’s been a year in which the true spirit and resilience of the United Kingdom has been on show, from the support given to our Ukrainian friends, to the work being done to ensure essential aid reaches the most vulnerable overseas.

‘And closer to home, those who have checked on friends and neighbours, volunteers, public servants and essential service staff all working over Christmas – I am truly humbled by your dedication and I know your selflessness this festive season will spread cheer across the country.’

Not a happy Christmas! Rail strikes mean many last long-distance services leave before lunchtime as 17million cars are set to cause motorway chaos and Heathrow’s departure boards go down

The King’s most poignant speech: Monarch nods to his late mother the Queen by recording Christmas message in St George’s Chapel where the world was afforded a last glimpse of her coffin