A red-brick house in Chicago that notorious mobster Al Capone once lived in has been sold for $226,000.

The 2,820-square-foot two-flat on Prairie Avenue, sold for more than double its original asking price of $109,900.

Capone first moved into the property with his mother and sister in 1923 after the family relocated to Chicago from New York.

The names of Capone’s mother Teresina and his wife Mae were on the title deeds and it was purchased at the time for a modest $5,000.

A red-brick house in Chicago, (pictured), that notorious mobster Al Capone once lived in has been sold for $226,000 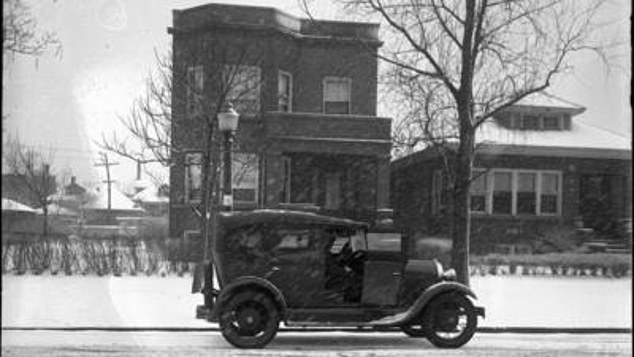 Considered a ‘prisoner’ at the home, Capone installed a secret tunnel from the basement to the garage to evade police watch (pictured: A police car sits outside the home in 1925)

Listing agent Ryan Smith of Re/Max Properties told the Chicago Tribune: ‘We had like 80 offers on it. We had a lot of press on it, so I think that helped it out.’

He added: ‘I have no idea what the buyers want to do with it. It needs to be modernized to today’s standards.’

The house was built in 1909 and sits on an extra-wide lot. The two-flat has had a number of owners since the Capone family.

According to a Chicago Tribune news clipping from 1927, Capone ‘was virtually a prisoner’ at the home, with a police car often surveying for criminal misdeeds outside of the property on Prairie Avenue.

The most recent owner lost it to foreclosure in 2018, a real estate agent told the newspaper.

In 1989, the Commission on Chicago Landmarks and the Illinois Historic Sites Advisory Council both rejected bids to make the house an official landmark.His mother lived in the Park Manor home until she died in 1952 at age 84.

The seller first listed the two-flat in February. It has six bedrooms, hardwood floors, wood trim and molding, and large, octagonal living rooms in each unit. 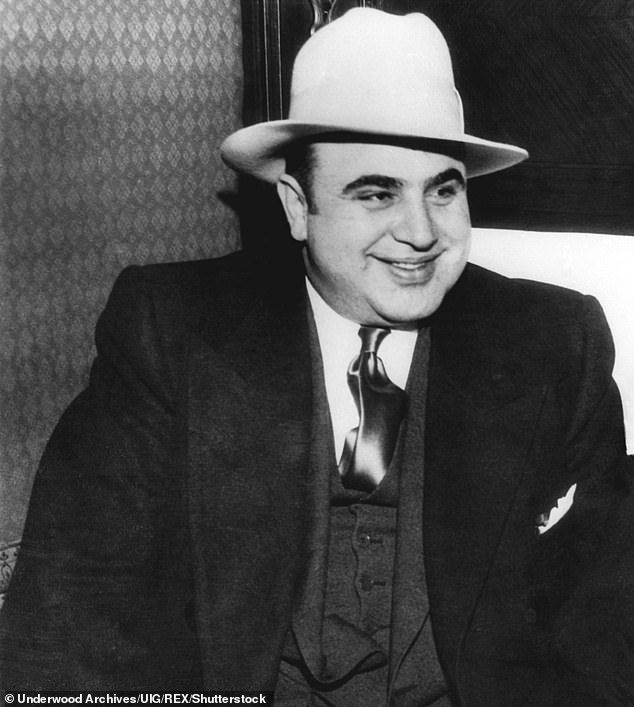 Al Capone is considered to be one of America’s most notorious gangsters, having overseen the US’ largest bootlegging operation in Chicago during the Prohibition

Some of the furnishings in the house date back to the 1950s and it has been widely reported that Capone built a tunnel that led from the home’s basement to a detached garage to evade police watch.

Born in 1899 in Brooklyn, New York, to Italian immigrant parents, Al Capone went on to become the most infamous gangster in American history.

It was when Capone’s father died in 1920 that he entered into a life of crime while when gang boss Johnny Torrio invited him to Chicago.

There Capone presided over a business involving gambling and prostitution which eventually turned into the illegal selling of alcohol during Prohibition. 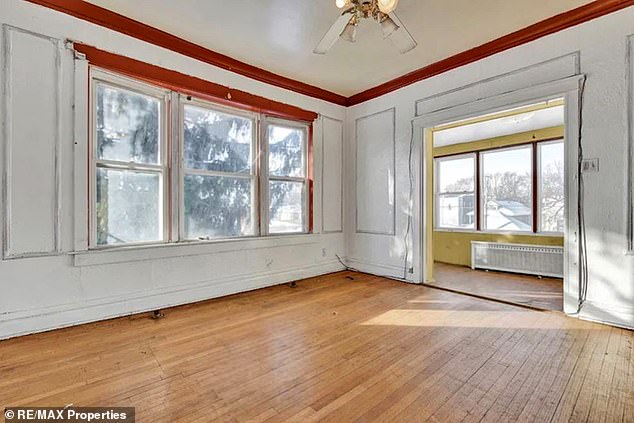 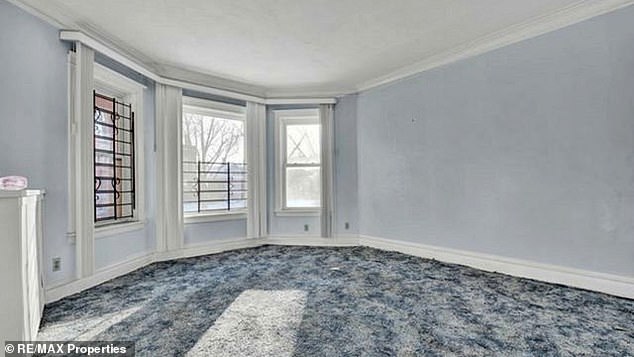 Much of the home is considered to be relatively untouched since Teresina occupied the home. In a 1929 Chicago Tribune news clipping,noted the home’s ‘soft lighting and velvet rugs’ 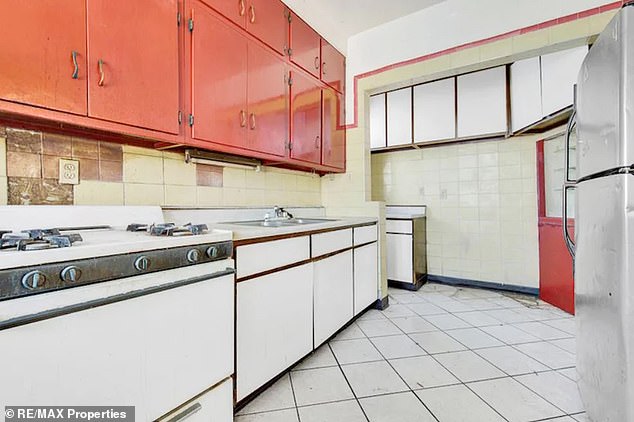 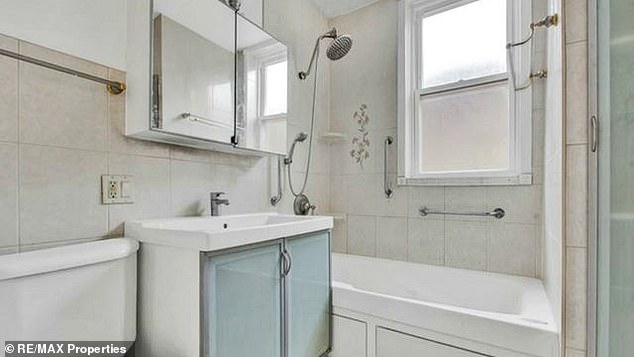 Capone bought the property for just $5,000 and its been on and off the market for much of the last 10 years

Organized crime ruled the streets of Chicago during the 1920s, and Brooklyn-born Capone played an instrumental part in the Chicago Outfit’s Prohibition bootlegging operation, before heading up the mob himself.

The Midwestern metropolis descended into lawlessness as politicians and law enforcement were bribed into silence while the mafia waged bloody warfare across the city.

Speaking to reporters in Chicago, Capone refused to apologize for his criminal operations and instead said he was doing a ‘public service’ to members of the city.

But for all his showmanship and flashy outfits, a darker side to Capone lurked beneath the media’s glare. 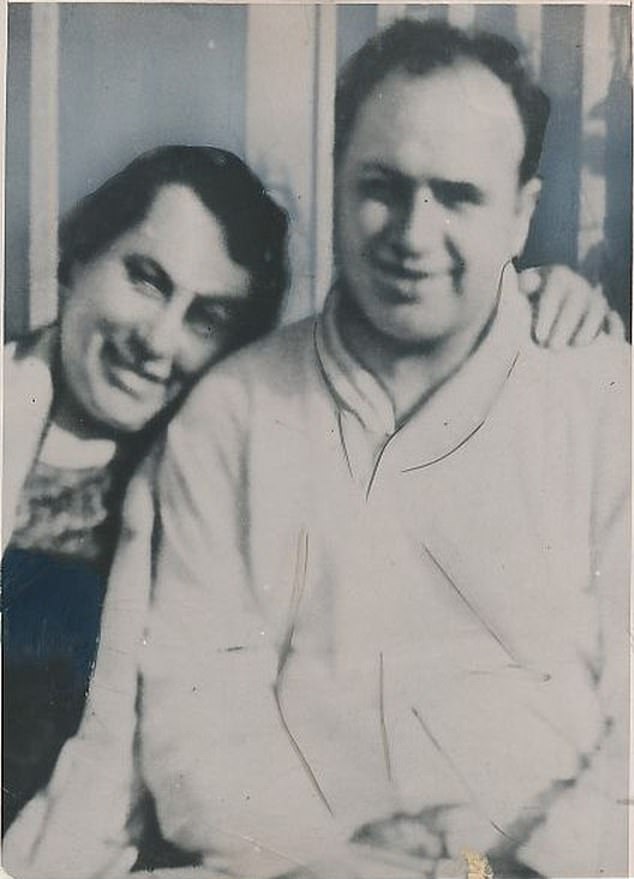 Cappone pictured on an unknown date with his mother Teresina, who lived in the home until her death in 1952

Trafficking alcohol during Prohibition was a lucrative business for organized crime and Bugs Moran, head of The North Side Gang, controlled the majority of shutdown breweries and distilleries that lined the north side of the city.

Determined to monopolize the city’s operations, Capone’s outfit declared war on the North Side gang, and between 1922 and 1926, 474 mobsters were killed.

Capone narrowly escaped death twice himself in 1925 and 1926 after being ambushed by North Side capos.

They had been lured to the SMC Cartage Warehouse under the false promise of a stolen, cut-rate shipment of Canadian whiskey that belonged to Capone.

While widely suspected of ordering the hit, Capone made sure to be in Florida when the hail of bullets was fired.

In  1931 the U.S. government finally indicted Capone on 22 counts of income-tax evasion and he was sentenced to 11 years in prison.

He served six years in the notorious island prison Alcatraz before being released in 1939 to a mental hospital in Baltimore, where he remained for three years.

He lived out his final days in Florida with his wife and died of cardiac arrest in 1947. He owned a mansion on Miami Beach, which was on the market for $15 million in 2018, according to the Miami Herald.