Top-rating breakfast radio host Alan Jones has been known for decades for pushing – and sometimes breaking – the rules governing what can be broadcast on air.

He can be combative with politicians and public servants, fawning to sporting and entertainment stars and charming to his legion of conservative elderly listeners.

In 2004 another side of the 2GB announcer’s studio manner was revealed when a blooper tape of off-air rants was leaked to the ABC’s Triple J Hack program.

The tape, made while Jones was at 2UE in the 1990s, captures the former Wallaby coach bringing language far more suited to the locker room into the studio.

Top-rating radio host Alan Jones was recorded making expletive-laden rants while working at 2UE in the 1990s. During the recordings Jones calls people d***heads, dopes, deads***s and f***wits. The tape was leaked to ABC’s Triple J in 2004 and broadcast on its Hack program

Jones, who describes himself as ‘the Muhammad Ali of 2UE’ in the recordings – berates colleagues and advertisers, becomes infuriated by technical issues and repeatedly complains about dust.

He calls people d***heads, dopes, deads***s and f***wits and says a copywriter should ‘be given a hot knife, preferably across the lower part of the throat.’

Jones even blames the 1984 action-adventure film Indiana Jones and the Temple of Doom for a Wallabies Test loss in a foul-mouthed tirade and declares waterbeds are designed for ‘having a f*** on a rolling bed’.

Some of the time his colleagues can be heard laughing along with him.

The tape was made as Jones pre-recorded segments and advertisements to be run on 2UE and stations which syndicated his program, presumably after his breakfast show was over.

It starts with Jones apparently bemoaning the timing and quality of a script he has been forced to read.

‘F***ing hopeless,’ he says. ‘Well it is f***ing hopeless. I mean, if this is that bloody urgent I should be given it in the morning. 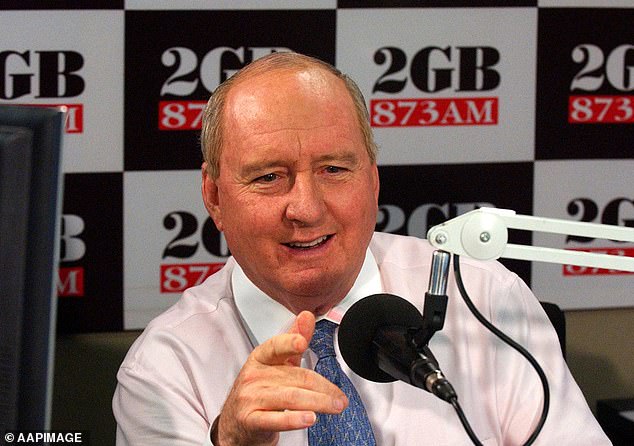 Jones, who is caught describing himself as ‘the Muhammad Ali of 2UE’, berates colleagues and advertisers, becomes infuriated by technical issues and repeatedly complains about dust 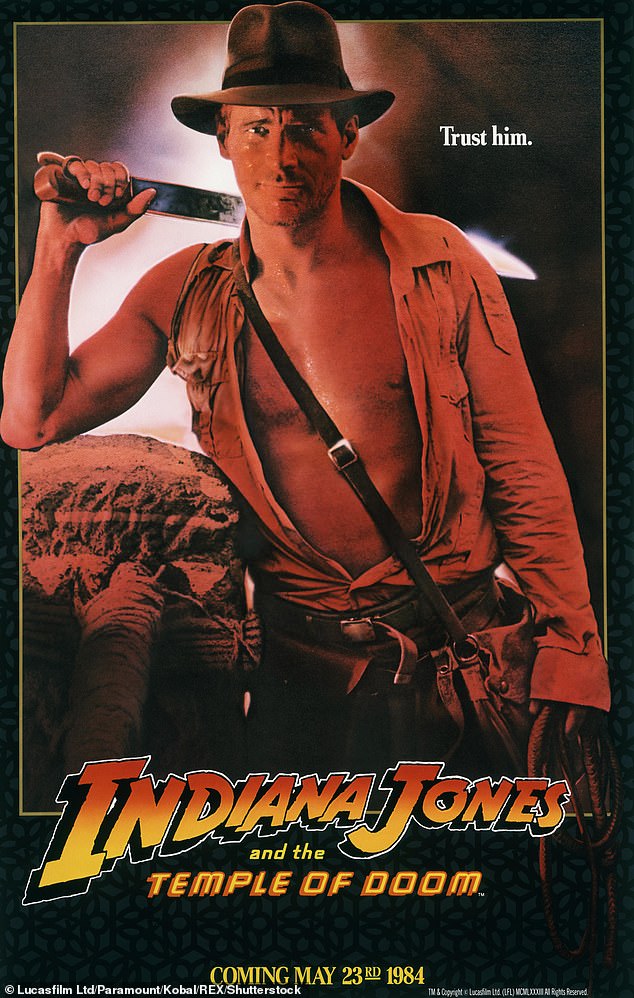 Jones, who coached the Wallabies in the 1980s, blamed one Test loss on his players watching Indiana Jones and the Temple of Doom. ‘The reason we lost the f***ing second Test against the All Blacks, ’cause that movie frightened the s*** out of my team the night before we played’

‘I just don’t see my life should be turned into a f***ing nightmare for the sake of other incompetents.

‘It’s absolutely ridiculous. I’ve got to catch a plane at ten o’clock to raise f***ing money for charity and I’ve got these people here sticking stuff up my bloody nose and my a***. It’s just ridiculous.’

As Jones begins his ‘What happened today’ segment a producer tells him his voice is breaking up in the recording.

‘I’m not doing this again. I don’t see why my life should be made a f***ing misery because I’m not given the right instructions. I mean this is absolutely ludicrous.’

A recurring theme in the tape, which Hack dubbed Alan Jones: The Closet Recordings, is the broadcaster complaining about unwanted dust in his studio.

As he records an editorial against sportsmen objecting to drug tests Jones erupts:

‘Ah, there’s f***ing dust in this studio. You know if it was bloody John Laws or someone the whole joint would be cleaned out. It’s f***in’ ridiculous.’ 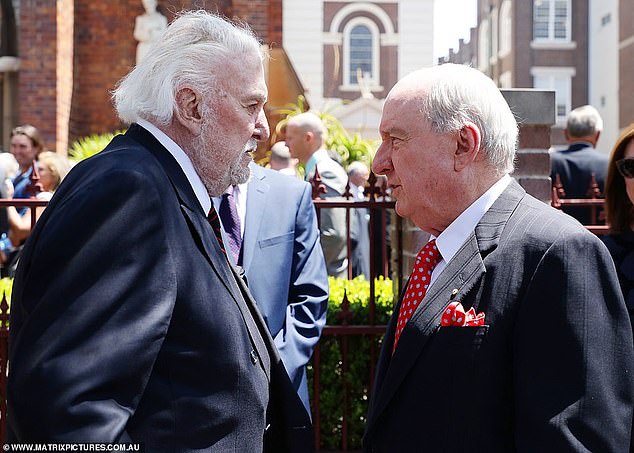 Alan Jones (right) repeatedly complains about dust in his studio on the blooper tape, suggesting the room would be cleaned if occupied by longtime rival John Laws (left)

Jones interrupts another piece complaining of the same problem. ‘Ah, there’s dust in here. Jesus, it’s bloody insufferable. How does this happen?

When Jones can breathe again he provides his opinion on the purpose of waterbeds while recording a commercial. 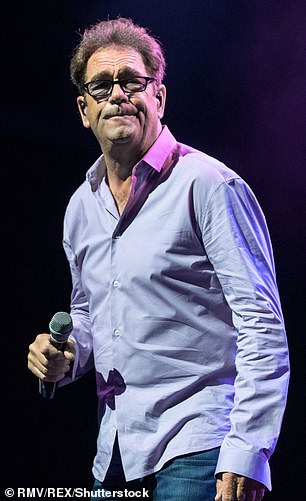 ‘Who the f***’s Huey Lewis?’ Alan Jones did not know the name of the lead singer of 1980s US rock band Huey Lewis and the News

‘Find out why so many people are choosing the comfort of a waterbed from Water Brothers,’ he says. ‘Remember the name: Water Brothers Waterbeds.’

”Getting a good night’s sleep? They’re having a f*** on a rolling bed, that’s what it’s about. God almighty. How do they do it? Let’s go.’

During another segment Jones is supposed to mark the birthday of the lead singer of 1980s American pop-rock band Huey Lewis and the News.

Among the out-takes is Jones giving his assessment of how a screening of Indiana Jones the night before a 1984 Test against New Zealand in Brisbane affected his Wallabies.

‘The movie Batman broke all box office records on this day in 1989,’ Jones says. ‘It had only been on the Australian screens for six days.

‘It beat records previously held by Indiana Jones and the Temple of Doon. Doom. F***, how did it rate? Bloody s***. Indiana f***ing Jones.

‘The reason we lost the f***ing second Test against the All Blacks, ’cause that movie frightened the s*** out of my team the night before we played. 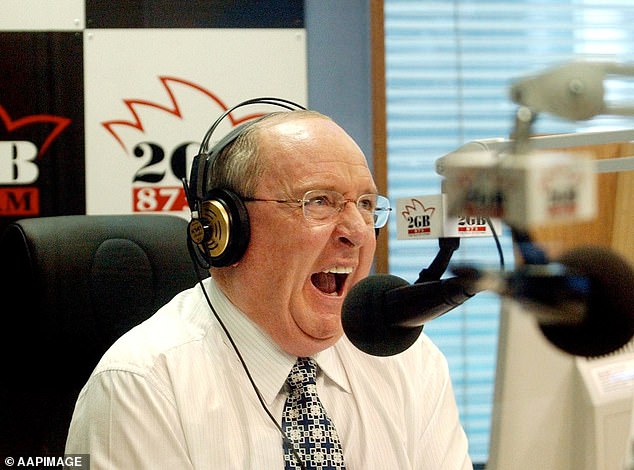 Jones, who is caught describing himself as ‘the Muhammad Ali of 2UE’, berates colleagues and advertisers, becomes infuriated by technical issues and repeatedly complains about dust

‘We led 12-nil and fell apart at the seems. F***ing [Michael] Hawker who was terrified by the snakes had the worst Test I’ve ever had ’cause he’d been awake all night, devoured by Indiana Jones’s temple snakes. Bastards.’

Jones seems aware it is likely one outburst will be kept to be played as a blooper reel at the station’s end of year party when he attacks a corporate ‘d***head’. 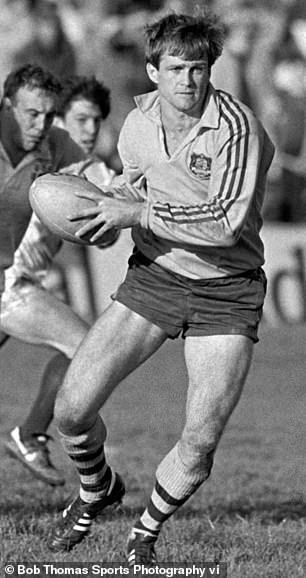 Scared of snakes: Alan Jones said Wallaby Michael Hawker (pictured) had nightmares after watching Indiana Jones and the Temple of Doom before playing the All Blacks

‘Who was the stupid d***head that said they couldn’t take the show?’ he asks. ‘Who was he? That bloke walking around in the white shirt?

‘Just put him down on the list as unemployable. Well they are, all those jerks. That’s what they’re about.

‘All these deads***s from the corporate world are not really interested in selling product and moving product, which we’ll do.’

‘They’re just interested in having their name and picture on television and they spend about 15 times more than they have to pay here and get one thirtieth of the result.

‘D***heads. That’s why the corporate world’s in a state of disarray. Put that on the Christmas tape.’

Other times he uses similar terms when addressing junior colleagues in the studio.

‘Now don’t f*** up on that bloody thing which you’ve lost the last two times I’ve done it,’ he says.

‘You’ll take that out now and give it to someone so they know it’s on, right. You, ya d***head. Ya big dope. Keep ya hands above the table, right. What’s that poking up at me like a broken penis for?’

Jones told his listeners he would finish his 35-year radio career at the end of the month. His breakfast shift will be taken by 2GB drive host Ben Fordham.

On what is apparently a Friday afternoon recording caught on the blooper tape the legendary broadcaster signs off with this: ‘Hello, I’m Alan Jones and it gives me the absolute s***s to report that I’ll be back on Monday morning with all you f***wits.’