Radio host Alan Jones says he meant no harm to Jacinda Ardern when he said Scott Morrison should ‘shove a sock down her throat’ for pressuring Australia about climate change.

The Radio 2GB host said his comments about New Zealand’s leader had been willfully ‘misinterpreted’ by his many critics.

‘Of course what I meant to say was that Scott Morrison should tell Ms Ardern to ‘put a sock in it’,’ Jones said in a statement on Thursday afternoon.

‘There are many people who would relish the opportunity to misinterpret things that I have said as we have seen online this afternoon.

‘Of course I would not wish any harm to Jacinda Ardern.

‘This wilful misinterpretation distracts from my point that she was wrong about climate change and wrong about Australia’s contribution to carbon dioxide levels.’

Jones sparked a furore earlier when he attacked Ms Ardern for comments about Australia’s efforts to stop climate change. 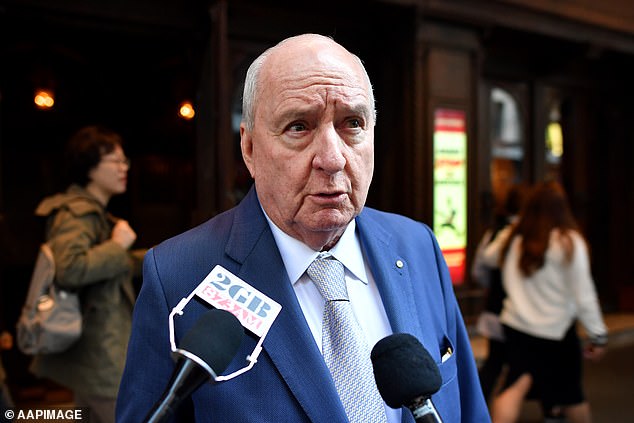 During a rant about Ms Ardern’s remarks, Jones said: ‘I just wonder whether Scott Morrison is going to be fully briefed to shove a sock down her throat’ 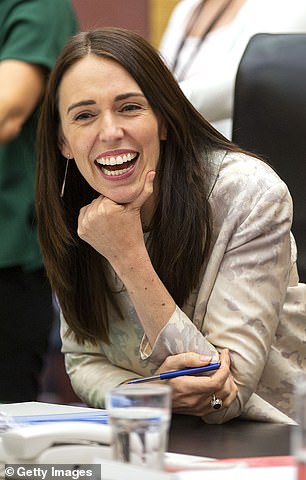 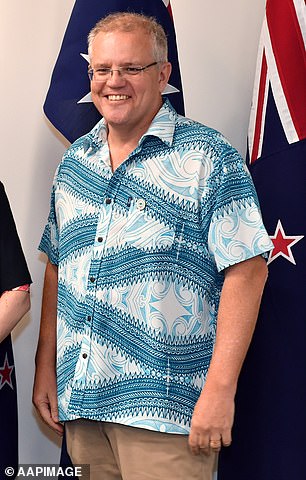 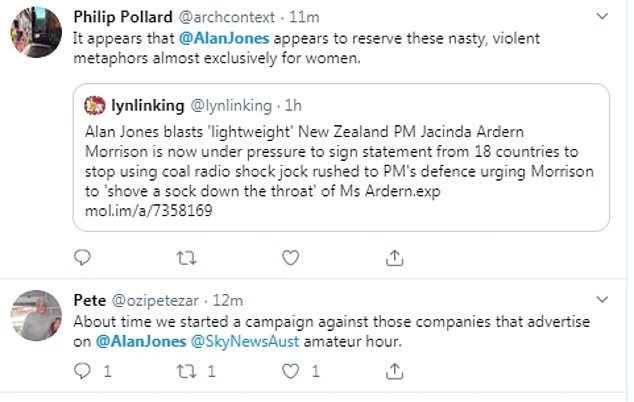 Mr Morrison and Ms Ardern are attending the Pacific Islands Forum in Tuvalu, an independent nation in the South Pacific. Ms Ardern had warned Mr Morrison’s government ‘will have to answer to the Pacific’ on global warming, amid pressure for Australia to sign a statement calling for the world to phase out coal.

Jones said: ‘I just wonder whether Scott Morrison is going to be fully briefed to shove a sock down her throat.’

‘She is a joke this woman, an absolute and utter light-weight. These people are an absolute joke and Jacinda Ardern is the biggest joke.’

They were compared online to infamous comments he once made about former Australian Prime Minister Julia Gillard. Jones once said the former Australian leader should be ‘shoved in a chaff bag’, dumped out at sea and told to ‘swim home’, along with sometimes parliamentary ally, Greens leader Bob Brown.

On another occasion, he sensationally told a function that Ms Gillard’s late father had ‘died of shame’. He later publicly apologised, with Ms Gillard refusing to take a personal call. 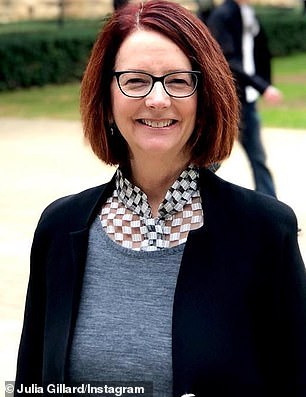 Jones once said former Australian prime minister Julia Gillard should be put in a chaff bag, dumped at sea and made to swim back

This morning, Jones said of Ardern: ‘Here she is preaching on global warming and saying that we’ve got to do something about climate change.

Many of Jones’s listeners on Facebook were on board with his comments called Ms Ardern a ‘lightweight’.

One fan said: ‘Couldn’t agree more with Alan Jones. Tell it like it is. NZ must DUMP Ardern ASAP before the country loses all credibility.’

Another said: ‘She thinks she can get away with the usual lefty fake bluster’.

But his sock-down-the-throat comment that provoked some Twitter users to go so far as call for him to be taken off air.

‘It appear that Alan Jones appears to reserve these nasty, violent metaphors almost exclusively for women,’ one Twitter user claimed.

Said another: ‘Alan Jones must be taken off air.’

A third: ‘Can’t help but notice the disturbing theme in Alan Jones’ suggestions for dealing with women he dislikes or disagrees with: physically silencing is his clear preference.’

Another added: ‘Alan Jones calling someone a joke… Something about pots and kettles comes to mind’.

Jones doubled down on his position on climate change on Facebook, going on to accuse Ms Ardern of excluding agriculture and methane from her calculations, because they ‘contribute half of New Zealand’s greenhouse gas emissions.’

‘When it comes to fossil fuel power generation, coal, oil, gas, biomass – which is dirtier than Australian black coal – New Zealand gets 67.2 per cent; we get 84.8,’ Jones said.

‘The point is, no matter what either of us does, there will be no impact,’ he said.

Jones also pointed out the comparison in the number of Australian expats living in New Zealand and vice versa.

According to Australian Bureau of Statistics figures, there are 568,000 Kiwis in Australia.

‘We have almost 15 times that number of Kiwis living here. Presumably they prefer Scott Morrison to Jacinda Ardern’.

‘Every single little bit matters. So that is why New Zealand has joined that international call. That is why we speak, I believe strongly on the international stage around these issues,’ Ms Ardern said, according to the Sydney Morning Herald.

‘But ultimately we all have to take responsibility for ourselves … Australia has to answer to the Pacific. That is a matter for them.’

In Tuvalu on Wednesday, Morrison vouched that Australia would be a ‘champion’ for the environment in the Pacific.

However, reports have claimed the country’s negotiators are working to water down an official communique about climate change.

Morrison’s visit to the tiny island nation of Tuvalu is the first prime ministerial visit since Bob Hawke in 1984.

Morrison will take the next few days to discuss the environment, the economic future and employment opportunities for young people in the region.