A Sydney man who can give no reason at all for stabbing his long-term partner to death after making her a cup of tea has been jailed for at least 14 years.

Months earlier, Greentree lost his job as a bartender at Kareela Golf Club for allegedly providing drinks for the kitchen staff which were not paid for.

Ms Butterworth, who had been his de facto wife for about 30 years, was on the aged pension, suffered serious longstanding health problems and had been referred to palliative care.

Greentree had been her primary carer.

In the lead-up to the murder, the couple experienced financial difficulties and was facing eviction which had left Ms Butterworth extremely distressed.

On the morning of August 13, Greentree woke up, had a cup of tea, watched TV, made a shopping list and when his partner came into the lounge room made her a cup of tea.

‘The offender told the police that he was about to go out shopping when he then picked up a knife from the kitchen, walked to where the deceased was sitting in the armchair and, from behind her, stabbed her once in the back right side of her neck,’ the judge said. 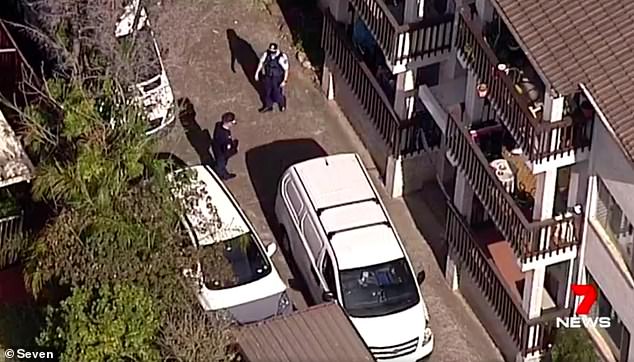 Greentree stabbed his de-facto partner in the neck before she tried to stand and he pushed her down and stabbed her in the chest. Scene pictured

He stabbed her again on the right side of her chest and held her down by the shoulders until she stopped moving.

Greentree then cut his right wrist, causing a superficial laceration, drank alcohol and Ms Butterworth’s liquid morphine and lay on his bed, where he was found by her home care nurse.

In his police interview, he repeatedly said he did not know why he stabbed her, denying there had been any violence within the relationship or having ever hit her.

He had no mental health history and when asked by a counsellor if he had any idea whey he killed his partner, he said: ‘No, I can’t – I can’t think why, don’t know.’

Greentree did not relate their financial stresses to the killing and denied having any relationship stresses.

‘There was no evidence to suggest that it was a mercy killing,’ the judge said.

At his sentence hearing, Greentree said the couple had been happy and the judge accepted he was extremely remorseful.

‘This is an unusual case,’ he said, noting Greentree had no criminal record and was a person of good character.

He jailed him for 18 years and nine months with a non-parole period of 14 years.