America’s Dad Alan Thicke is now resting in peace, thanks to a white headstone that marks his grave at Santa Barbara Cemetery.

A source at the picturesque final resting spot says the headstone is not the only new thing there.

‘Someone placed a fresh new bouquet of flowers at the spot, you can tell it was done with a lot of love and thoughtfulness,’ they said.

The Santa Barbara Cemetery is less than ten miles from the Carpinteria ranch he shared with his third wife, Tonya Callau Thicke.

The headstone pays homage to Thicke’s Canadian heritage, and to his three sons Brennan, 42, Robin, 40, (by first wife Gloria Loring) and Carter, 20, (from his second marriage to Gina Tolleson.

‘Adored by his wife, loved by his sons, family and friends. Forever missed…’

It’s been a tumultuous eight months since Alan’s passing at the age of 69.

The Growing Pains star collapsed from a heart attack while playing hockey with his youngest son at an ice rink in Burbank and was taken to nearby St John’s Medical Center.

In the months that followed, Alan’s widow Tanya Callau and his two oldest sons Robin and Brennan have been at war over his estate. 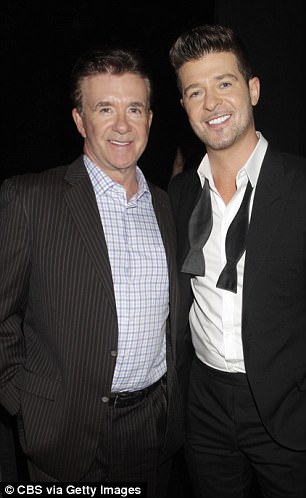 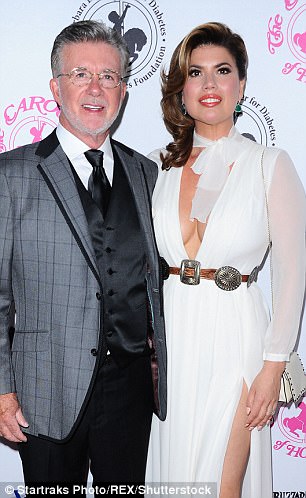 In May, they filed legal documents in their father’s probate case to stop what they alleged was a money grab by Tonya to over extend what she was guaranteed in her prenuptial agreement.

Tonya, 41, fired back saying she had no such intentions, but the eldest sons were upset because she wouldn’t allow them to turn part of the ranch into a ‘pot farm.’

With all that going on, it was up in the air when Alan would get his headstone. The site sat empty for ages, says a source.

‘Other people who died after Alan were getting their markers about three months after their passing. It made everyone wonder if the family battles were delaying it in some way. But now his family, friends, and fans can come and leave flowers or have a moment with him.’

Whatever family squabbles have ensued, the person who inscribed the plaque kept the message on point and likely the way Alan himself would have wanted it to read.