In bombshell comments, Tony Blair’s former spin doctor wrote a letter to the party leader saying that he would no longer fight his expulsion.

He had been controversially thrown out for revealing he had voted for the Lib Dems in the European elections.

In the letter, Mr Campbell warned Mr Corbyn he was poised to lose the next election against Boris Johnson.

Alistair Campbell, pictured outside his London home in May, has said he no longer wanted to be part of Jeremy Corbyn’s Labour Party

In excoriating comments, he also said Mr Corbyn risked destroying the party as a ‘political force capable of winning power’.

He wrote: ‘With some sadness but absolute certainty, I have reached the conclusion that I no longer wish to stay in the party, even if I would be successful in my appeal or legal challenge.’

The letter was published in full in the New European.

He added: ‘In normal times, with a government having failed so badly for so long to address the challenges of the time, not just Brexit but so much else, the people would look towards the opposition not merely to oppose, but because they see a clear, credible, coherent alternative for government. 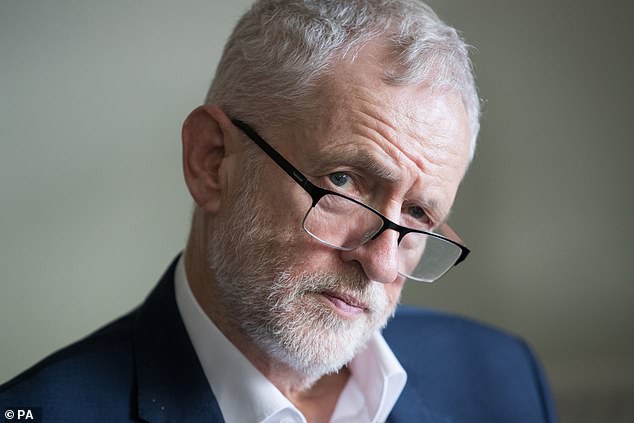 Mr Campbell warned Jeremy Corbyn, pictured, he was poised to lose the next election against Boris Johnson in his letter which was published in full in the New European

‘This simply is not happening. It is incumbent on everyone in the Labour Party – but especially you as leader – to reflect and take responsibility for what now happens.’

He went on: ‘I see no sign that you and your office have grasped the seriousness of what is happening, let alone devised or begun to execute a strategy to respond and defeat it.’

He also said Britain could be just weeks form an election, adding that with any current analysis he was ‘unlikely to be in a position to win a majority’.

His letter follows comments by Mr Blair who refused to confirm if he would vote Labour at the next general election.