A woman who gorged on three huge evening meals every day has completely transformed her body after losing 196lbs (14st).

Erin Hulick claimed she had no idea she had become so large – despite wearing UK size 30 (UK 34) clothes and tipping the scales at 350lbs (25st).

But Erin, of Albany, New York, had a realisation on her 29th birthday that she needed to lose weight or she could die young.

Despite shedding an impressive amount of weight, she admits she’s been left with excess skin and is now crowdfunding to raise $35,000 (£27,000) for surgery to have it removed.

Erin Hulick, left, before,  tipped the scales at 350lbs. After having an epiphany that she may die before her 30th birthday, she decided to embark on a diet and shed 196lbs, right

The 30-year-old said: ‘I had an old pal who didn’t recognise me after I lost the weight.

‘I was seeing some people in Florida and one guy introduced himself to me when I’d known him for years and years at high school.

‘He said “Nice to meet you, I’m Rick”, and I just said “Uh, it’s Erin!” and he was really embarrassed and shocked.’

Erin started gaining weight when she was four-year- old after scoffing macaroni and cheese and peanut butter and jelly sandwiches.

By the time she hit her teenage years she weighed almost 266lbs (19st).

Erin, who helps the disabled find work, said: ‘My mum Ann, now 63, became really worried about me so I eventually went to the doctor and was diagnosed with polycystic ovary syndrome (PCOS), where cysts develop on the ovaries, causing weight gain, amongst other symptoms.

She would gorge on 5,000 calories-a-day and three meals every night, left. After her dramatic transformation, right, Erin says even close friends don’t recognise her new slender shape 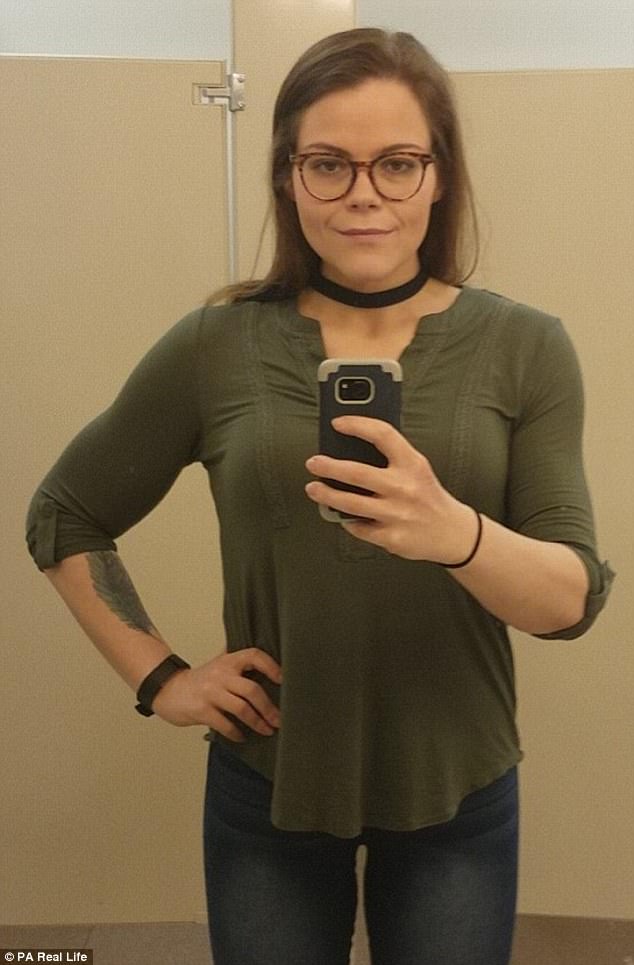 Discussing how her friends motivate her, she said: ‘They’d say ‘Come to the gym with me’ or ‘You’d feel so much better if you were a bit lighter’

‘The doctor said I should think about losing some weight, but I really thought I was happy the way I was.’

Even at her largest Erin says she was in denial about her size, and would even get offended when people suggested she should start eating healthier food.

‘Family and friends tried to encourage me to lose weight, but I got really angry with them,’ she recalled.

‘They’d say ‘Come to the gym with me’ or ‘You’d feel so much better if you were a bit lighter’.

‘I know they were just trying to encourage me, but I took offence. I felt happy the way I was and didn’t want people telling me what I should be doing.’

Large portion of pasta, drenched in butter and cheese

A peanut butter sandwich and cereal after

Takeaways, washed down with fizzy drinks

She cut down on her carbohydrate heavy diet

Chicken and vegetables for dinner

Erin thinks she may have had a mild form of body dysmorphia, thinking she was much slimmer than she actually was.

She said: ‘I thought I was fine the way I was. But now I look back at pictures of myself then, I can’t believe how large I’d got.

‘I really didn’t see myself like that. Now I look at those pictures and think ‘what was I thinking?’ and ‘how did I let myself live like that?’

Having never tried to lose weight in the past, Erin started researching the best way to shed the pounds and  adopted a healthy lifestyle

‘I was getting ready for a night out with my girlfriends and I couldn’t find a single thing to wear,’ she recalled.

‘I must have tried 10 outfits on and nothing looked good. I was sat at the end of my bed, and then it dawned on me… it’s not the clothes… it’s me.

‘I realised I really needed to do something about my weight. I was turning 30 the following year and I worried I was going to die really young.’

Having never tried to lose weight in the past, Erin started researching the best way to shed the pounds. 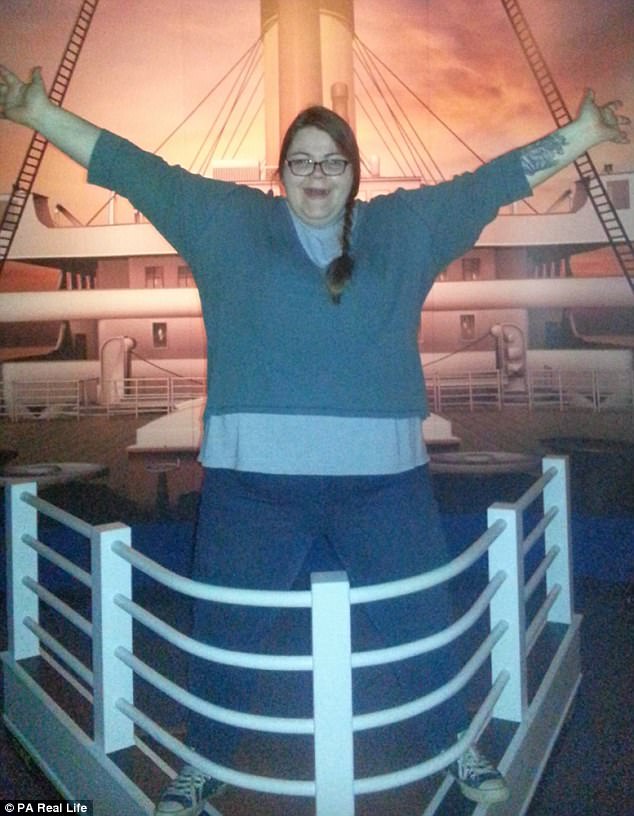 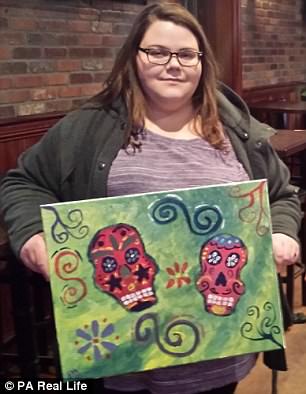 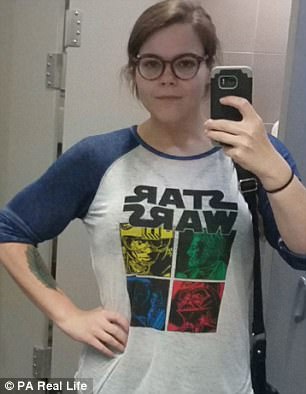 Unfortunately, as a result of the weightloss, she has 20lbs of excess skin. She is now trying to raise funds for an operation to have it removed

Most importantly, Erin ditched her three meals a night for good.

She started running and even bought an exercise ball to sit on at her desk so she could do small movements whilst at work.

One friend, who was used to seeing Erin big, even thought her weight loss plan was an April Fool’s Day trick when she turned down a meal at her favourite fast-food restaurant Taco Bell.

‘I feel fantastic and can’t believe how much weight I’ve lost in over a year,’ she beamed.

She says one of the funniest parts about losing weight is when old friends don’t recognise her. The 30-year-old said: ‘I had an old pal who didn’t recognise me after I lost the weight. ‘I was seeing some people in Florida and one guy introduced himself to me when I’d known him for years and years at high school’

As a result of the weightloss, she admits she has been left with embarrassing excess skin, which is uncomfortable to carry around 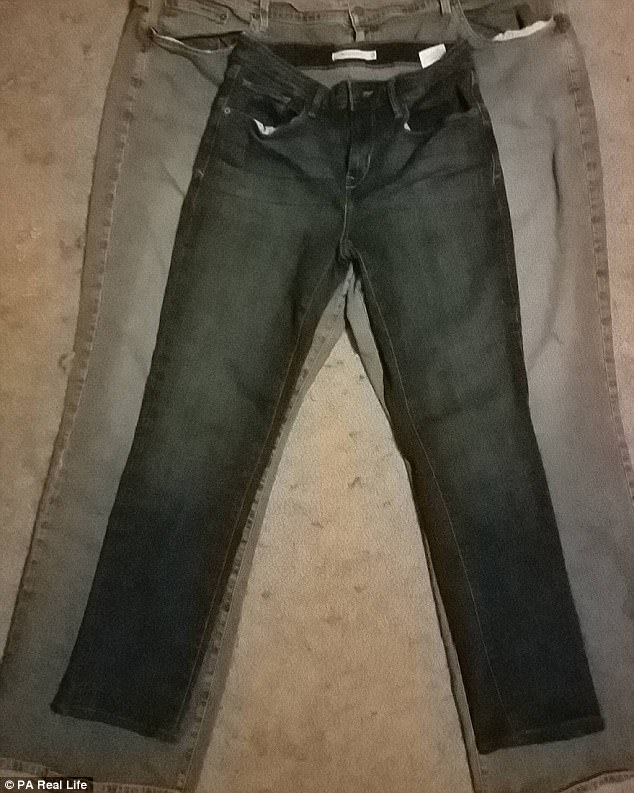 But one drawback of her weight loss is the stone and a half of excess skin she carries.

‘The result of the years of abuse and neglect I put my body through has left me with 20lbs of excess skin,’ she admitted.

‘When I look in the mirror, my mind struggles between pride and discouragement.

‘I would be lying if I said there wasn’t a dismal feeling that coincides with knowing that I worked so hard to get to where I am today, and yet this is what I am left with.

‘Not to mention the physical discomfort that comes with carrying this excess skin.

‘It’s really uncomfortable and is something I would really like to get rid of.’