An albino teenager who was abandoned as a baby because of how she looked is taking the modelling world by storm.

Xueli Abbing, 16, who was left outside an orphanage in China by her parents, is rapidly building a successful career, even featuring in the pages of Vogue Italia, while simultaneously breaking down the stigma surrounding her condition.

After being adopted by a Dutch family, Xueli moved to the Netherlands to live with her new mother and sister Yara, and she began modelling at 11.

Compiled in a gallery by Bored Panda, pictures show her striking beauty as she poses in stunning photos, wearing a vibrant collar made from colourful flowers or a wreath of dandelions.

As well as magazine shoots and catwalk work, she has also modelled for accessories giant Kurt Geiger.

An albino model, who was abandoned in China, has featured in Vogue as she attempts to break down the stigma around her condition 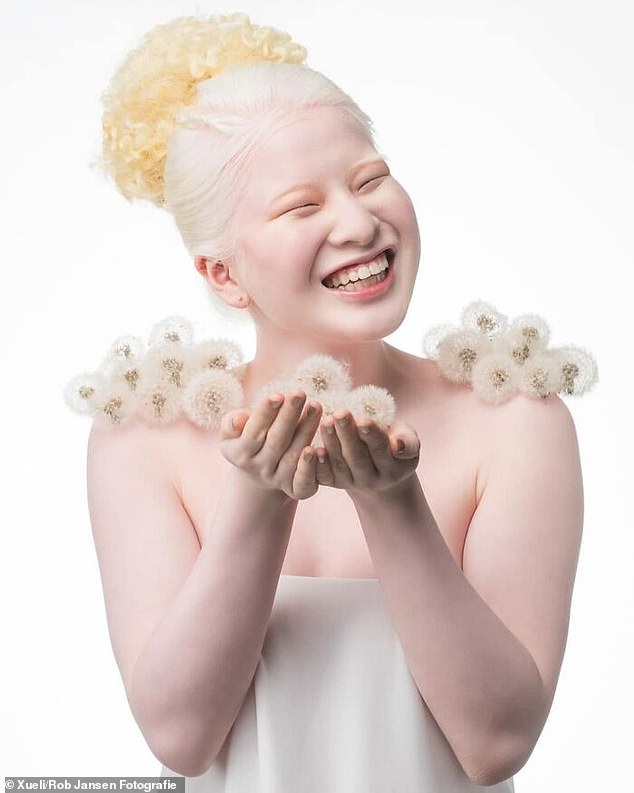 Compiled in a gallery by Bored Panda , pictures of Xueli Abbing, 16, show her striking beauty as she poses in various shots

She uses her platform to celebrate differences, raise awareness about albinism, and inspire others to embrace their natural beauty.

Having worked with some of the greatest fashion photographers and brands, Xueli has been featured in Vogue Italia and said the industry is ‘changing’.

She said: ‘In modelling, looking different is a blessing not a curse and it gives me a platform to raise awareness of albinism.

‘There are still models who are like eight foot two and skinny but now people with disabilities or differences are featured more in the media and this is great—but it should be normal.’ 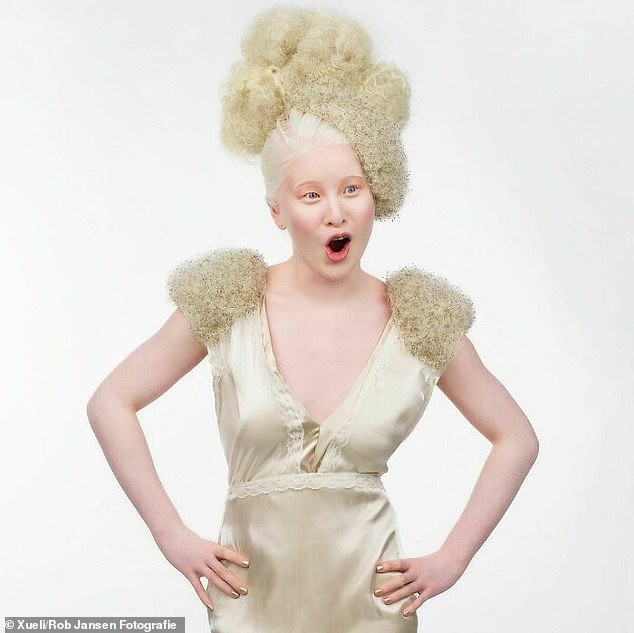 She was left outside an orphanage because of how she looked, and was adopted by a Dutch family at the age of three, and began modelling at the age of 11 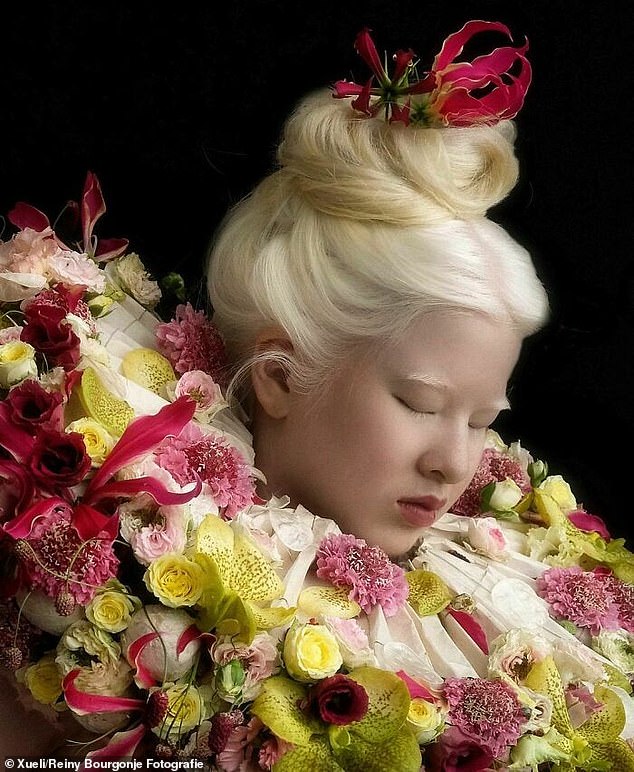 Having worked with some of the greatest fashion photographers and brands, Xueli has been featured in Vogue and said the industry is ‘changing’

She first began modelling by accident after her mother got in contact with a designer from Hong Kong who was designing clothes for her son, according to the BBC.

The designer called the campaign ‘perfect imperfections’ and Xueli joined the fashion show, which kickstarted her career.

The model, who only has between eight and ten per cent vision, added that people with albinism are subject to stereotyping and are often made to ‘depict angels or ghosts’.

Xueli feels this ‘endangers’ lives of children living in countries where the condition is not yet accepted. 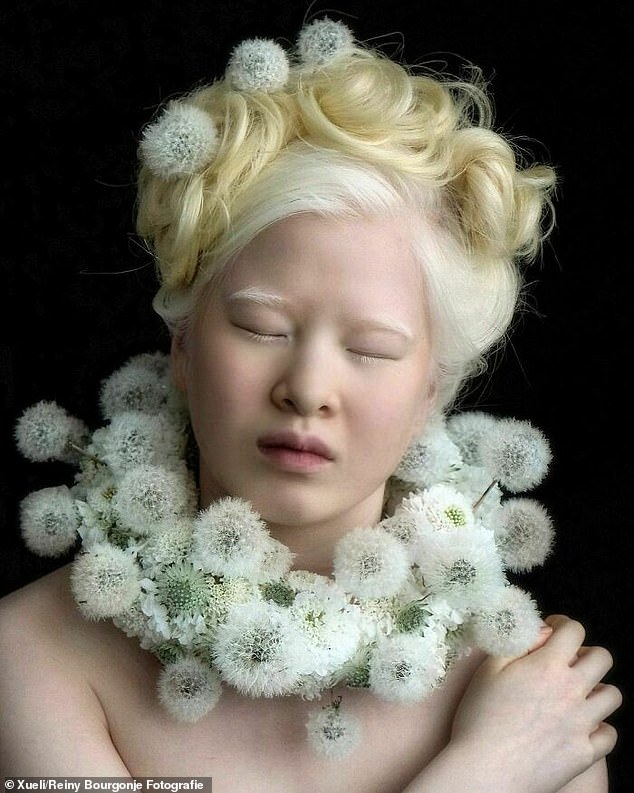 She uses her platform to celebrate differences, raise awareness about albinism, and inspire others to embrace their natural beauty 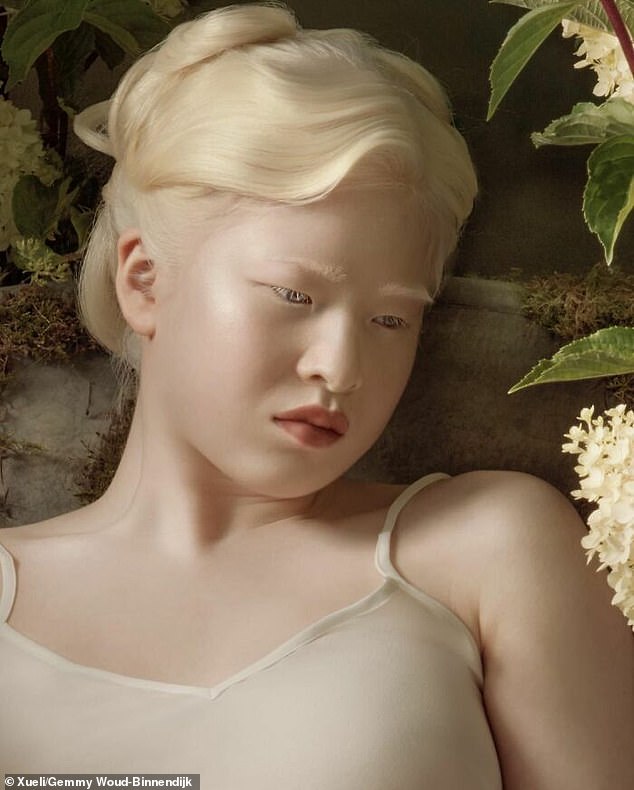 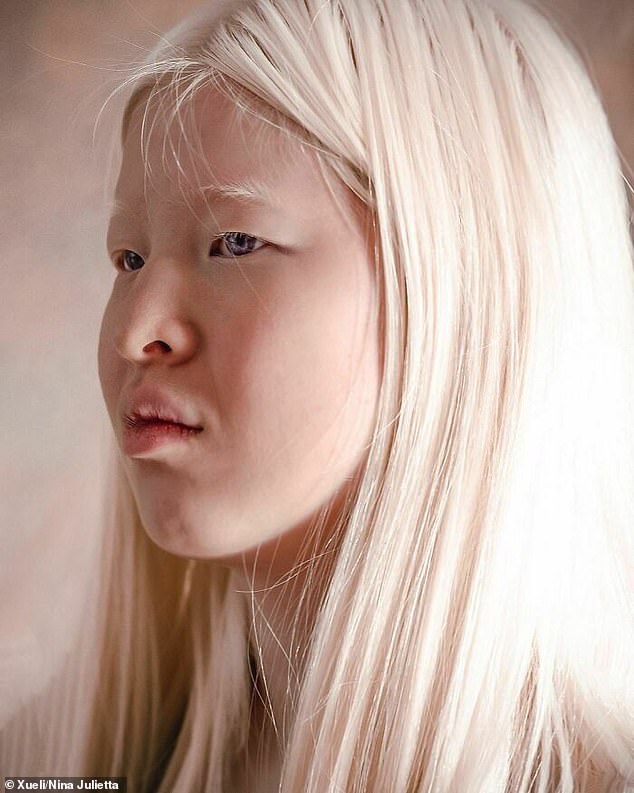 The model, who only has between eight and ten per cent vision, added that people with albinism are subject to stereotyping and are often made to ‘depict angels or ghosts’

What is Oculocutaneous albinism?

Oculocutaneous albinism is the most common type, affecting the skin, hair and eyes.

Oculocutaneous albinism reduces pigmentation of the colored part of the iris and the light-sensitive tissue at the back of the retina.

The condition can result from mutations in several genes, including those used to produce melanin.

Melanin is the pigment that gives skin, hair, and eyes their color. In the retina, melanin also plays a role in normal vision.

Oculocutaneous albinism is inherited in anautosomal recessive pattern, which means both copies of a gene in each cell have mutations.

In most cases, the parents both carry a copy of the mutated gene but do not show signs and symptoms of the condition.

1 in around 20,000 people around the world have some form of the condition.

There is no cure for the eye problems caused by albinism.

However there are a number of treatments, such as glasses and contact lenses, that can improve vision.

Yara, who manages her social media, said: ‘She works as a model in order to raise awareness around albinism and to show others that people with disabilities are “normal” as well and can perfectly participate in society.’

British agency Zebedee Management, who represent Xueli, are trying to make the industry more diverse, and represent those with ‘disabilities and visible differences’.

Albinism affects the production of melanin, the pigment that colours skin, hair and eyes.

People with albinism often have lighter colored skin and hair than the other members of their family or ethnic group and vision problems are common.

The exact colour depends on how much melanin their body produces and very pale skin that burns easily in the sun and does not usually tan is also typical of albinism.

In 2019, Thando Hopa, a 32-year-old South African model, made history as the first Vogue coverstar with albinism.