Alcoholic in-laws could be to blame for developing alcohol issues

Alcoholic in-laws may be to blame for a person developing their own issues with booze, a new study claims.

US researchers examined marital information on more than 300,000 couples from Swedish national data to investigate ‘rearing-environment effects’ for alcohol use disorder (AUD).

It found that even if a spouse isn’t an alcoholic themselves, their exposure to alcoholic parents as a child may have normalised alcoholic behaviours.

Growing up with an alcoholic parent may have taught people to subconsciously take on a duty of care, by helping their loved one through a hangover, for example.

The study shows the importance of involving both members of a couple in therapy sessions when one of them is experiencing issues with alcohol and drawing on past family experiences.

‘Our goal here was to examine whether a spouse’s genetic makeup influences risk for alcohol use disorder,’ said study author Professor Jessica Salvatore at Virginia Commonwealth University in the US.

‘In a somewhat surprising twist, we found that it wasn’t the spouse’s genetic makeup that influenced alcohol use disorder risk.

‘Rather, it was whether the spouse was raised by an alcohol use disorder-affected parent.’

More than 14 million US adults suffer from some form of AUD, a chronic inability to stop or control alcohol use despite the negative consequences, according to the National Institutes of Health.

While in the UK, more than 7.5 million people in the UK show signs of alcohol dependence, according to NHS figures.

Problem drinking that becomes severe is given the medical diagnosis of ‘alcohol use disorder’ or AUD.

AUD is a chronic relapsing brain disorder characterised by an impaired ability to stop or control alcohol use despite adverse social, occupational, or health consequences.

Health professionals use a list of symptoms to diagnose AUD.

Depending on how many symptoms the person has, AUD can be mild, moderate, or severe.

Treatment in the US includes therapy and medication.

The causes of AUD can include a mix of genetic, environmental, and social factors, including a family history of alcoholism.

The team found that marriage to a spouse with a predisposition to alcohol use disorder, even when they did not display alcohol abuse symptoms of their own, increased risk for developing AUD.

This increased risk was not explained by socioeconomic status, the spouse’s AUD status or contact with the spouse’s parents, suggesting a more ingrained factor.

Rather than genetics, this increased risk reflected the psychological consequences of the spouse having grown up with an AUD-affected parent.

The study demonstrates ‘the long reach’ that parental alcohol problems have on the next generation.

‘It’s not just the offspring of affected parents who are at risk, it’s the people those offspring end up marrying, too,’ said Professor Salvatore.

Those who grow up with a parent with an alcohol use disorder may be at particularly high risk of using alcohol as a ‘tool’ to improve their marital interactions.

For example, nursing their loved one through a hangover, which could offer an opportunity to bond or show affection, buying them alcohol to make them happy or using the disinhibiting effects of alcohol to share positive emotions.

Some couples may also be especially at risk of using alcohol as a way to take the edge off during difficult conversations or arguments, Professor Salvatore said.

‘These kinds of processes may inadvertently lead a spouse down the path of alcohol misuse.

‘To be clear, my guess is that these processes are out of people’s conscious control. No one wants to “give” their spouse an alcohol problem.’

Conclusions from previous studies of social genetic effects were limited by the fact that people’s genotypes were correlated with their rearing environments.

In other words, in prior studies it was difficult to say whether effects could be pinned to the partner’s genes or they were raised because their parents provided both.

‘What we were able to do in our study was tease apart the effects of the spouse’s genes and the rearing environment,’ Professor Salvatore said. 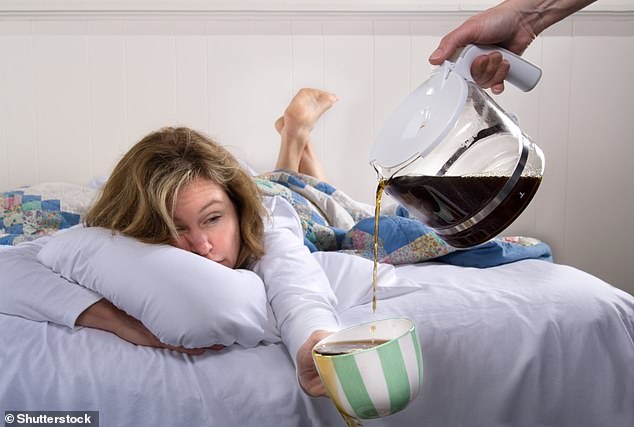 Growing up with a parent with alcoholism might teach a person to act in ways that reinforce their partner’s drinking problem, such as taking care of a them when they have a hangover

‘What we found was that marriage to a spouse who was raised by an AUD parent, rather than simply inheriting an AUD genetic predisposition, increased one’s own risk of developing AUD.’

The findings could help treat couples struggling with alcohol abuse by more directly including the spouse’s experiences as a child as part of therapies.

Interventions for substance-use disorders should be administered at the level of a couple or the family, rather than at the individual level, Salvatore said.

This study is part of Salvatore’s larger body of research that seeks to understand ‘how the people we love shape the way we drink’.

‘In the best-case scenario, spouses can be one of our first defences against poor health – they bug us to schedule our annual exams, and they’re among the first to notice if we’re feeling blue or tipping too many drinks back – but spouses can also be a liability for poor health,’ she said.

‘The results from this study underscore how a spouse’s experiences in his or her family of origin can be a risk factor for the development of alcohol problems.

The study has been published in the journal Psychological Science.

Britain is facing a surge in alcohol-related health problems following COVID-19 due to an increase in alcohol abuse during lockdown, medical experts have warned.

Tackling harms from alcohol — which could have knock-on effects for a generation — must be an ‘integral’ part of the nation’s recovery, they said.

Before the United Kingdom went into lockdown, alcohol sales shot up by around 67 per cent, with many subsequently drinking at home in isolation.

The warning was written in an editorial in the The BMJ penned by Baroness Ilora Finlay, chairwoman of the Commission on Alcohol Harms, and Ian Gilmore, chairman of the Alcohol Health Alliance.

‘Now, as signs emerge of some control over new cases of COVID-19, it is increasingly clear that if we don’t prepare for emerging from the pandemic, we will see the toll of increased alcohol harm for a generation,’ they wrote.

They added that the pandemic ‘has the potential to be an exemplar of our ambivalent relationship with alcohol and its consequences.’

People with pre-existing problems with alcohol and those on the ‘brink’ of dependence are at particular risk, they warned.