Customers at Aldi will be told when they can safely enter one of its supermarkets by a new traffic light system installed on the doors.

The German budget retailer said that the system would help to continue social distancing in stores by ensuring too many customers are not jostling for space in the aisles.

A green and red light will be erected above the entrances to its stores, and will signal green if customers are allowed to enter, dependent on the amount of shoppers inside at that time.

Aldi confirmed to MailOnline that the doors will remain closed and locked until the light goes green, and it said that fully trained marshalls will be on patrol in stores at all times ‘if they are required’ to ensure social distancing was being adhered to.

Like many other supermarkets, Aldi has already installed protective screens at its checkouts and put markers on the floors of the shops to encourage customers to stay more than two metres away from each other.

Pictured: The traffic light system that Aldi supermarkets will introduce across its stores in the UK

Aldi communications director Richard Thornton, said: ‘The protection and safety of our customers and employees is our top priority and this new system is an accurate and effective way to allow us to control customer numbers in stores.

‘The system’s trial was well received by our customers and we will be gradually rolling this new social distancing measure out nationwide from this week.’

It has also put up ‘sanitation stations’ and signs with advice on how to stay safe from coronavirus while shopping.

The German discount supermarket chain has 875 stores across Britain and employs 33,000 people. It plans to have expanded to 1,200 stores by the middle of the decade.

It comes as customers will soon enter a world of one-way systems and quarantined footwear when non-essential stores in Britain are allowed to reopen next month. 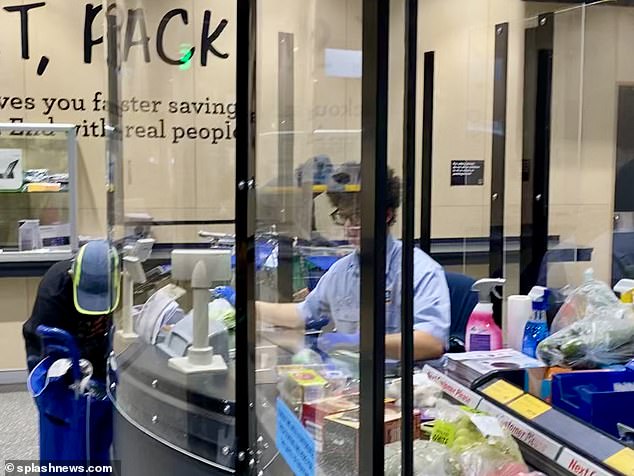 Pictured: And Aldi supermarket worker behind a protective screen as part of the new coronavirus protection measures 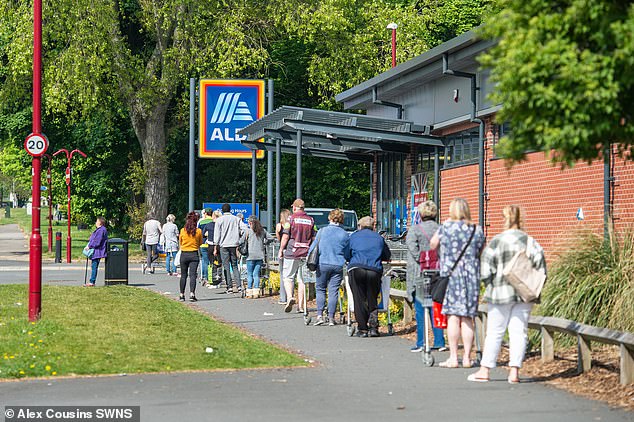 Pictured: Customers queue outside Aldi in Leeds, West Yorkshire, as the supermarket rolls out traffic lights at its stores

Thousands of shops, department stores and shopping centres can open from June 15, while outdoor markets and car showrooms will be allowed to open from next Monday as coronavirus lockdown restrictions are eased.

But things will look very different in the revamped stores, with checkouts behind screens, toilets and changing rooms closed, a limit on the number of customers allowed inside the store at any time and no seating available.

Stores will also feature markings outside to assist with socially-distanced queuing and encourage customers to shop alone where possible, according to union-backed guidance issued by the British Retail Consortium.

Retailers are gearing up for what has been dubbed the ‘sale of the century’ with about £15billion worth of stock available after clothing stores shut their doors just days after filling their rails with spring and summer fashion.

Marks & Spencer and Next are among the retailers expected to promote huge discounts, with warehouse storage space 90 per cent full for some outlets who have resorted to putting products in containers on railway sidings.