Tense footage shows a daredevil climber dangling by one hand from a 1,200-foot tower while giving a thumbs up to the camera.

Alex Nomernoy, 19, ascends the huge operating tower in Russia with no safety equipment, shimmying up dozens of narrow bars during the terrifying expedition.

And the Muscovite wastes no time in celebrating his incredible climb when he reaches the top.

After hoisting himself over the edge, he holds on to a spindly bar with just one hand while giving a thumbs up to his fans.

The thrill-seeker then makes a running motion with his feet against the backdrop of stunning panoramic views.

Relaxed: Alex Nomernoy, 19, ascends the huge operating tower in Russia with no safety equipment, giving a thumbs up to the camera when he reaches the top 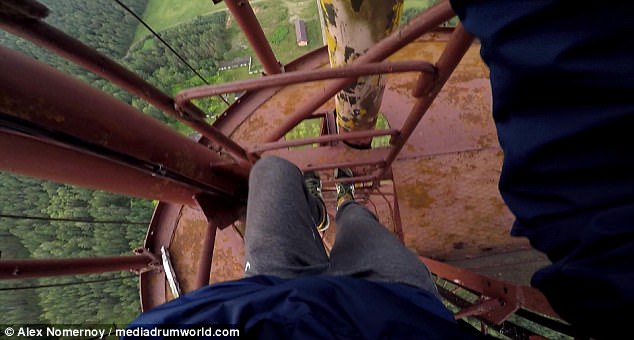 Nerve wracking: He can be seen shimmying up dozens of narrow bars during the terrifying expedition

‘The tower is highly secured, so I had to go early in the morning when the security guards aren’t looking at the cameras,’ he said.

‘I had to climb over several fences on my way before climbing up the tower itself.

‘It’s 370 metres high but luckily I’m not afraid of heights so the climb wasn’t too scary, the only thing I was concerned about was the cold wind at the top! 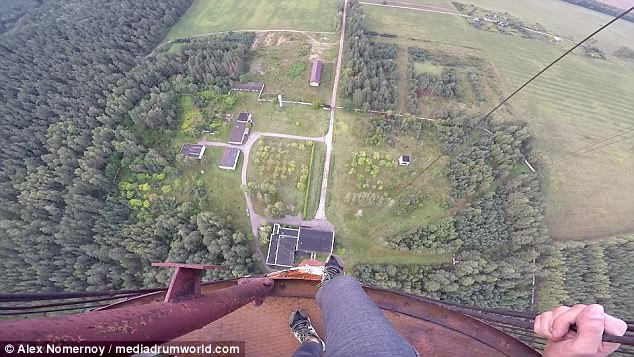 Risking his life: The daredevil dangles over the edge of the enormous structure while celebrating his ascent 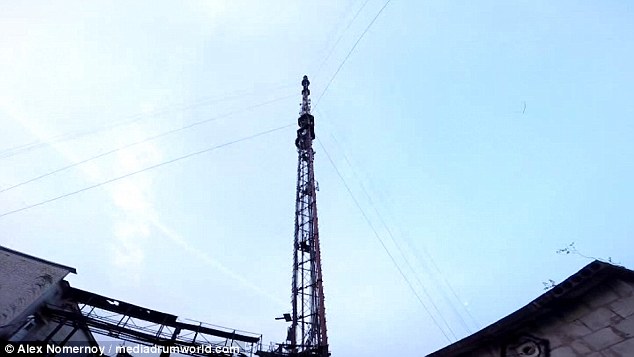 A long way up: The operating tower is 1,200-feet high and overlooks the stunning landscapes below 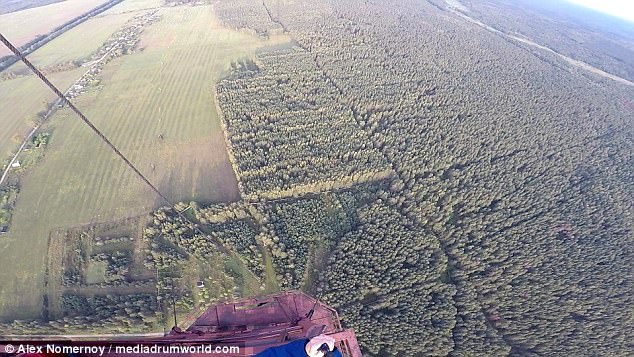 Bird’s-eye view: Footage from the top of the tower shows the great expanse of forest below

‘When I got to the top I could feel the tower swinging side to side because of the wind.

‘Then when I climbed down I thought the police were waiting for me, but fortunately I as mistaken and no one had noticed me.’

Alex described the passion he has for his work, detailing the techniques he uses to get his amazing shots.

‘I really like to look at different towns and cities from an unusual perspective,’ he said.

‘A few years ago, I climbed to the roof of a tall building for the first time, there I realised how beautiful views are from heights. 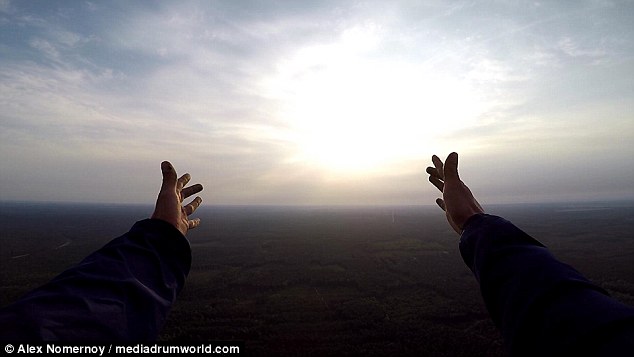 ‘Since then, I’ve climbed numerous rooftops and towers, taking beautiful photos and videos so that people who are maybe afraid of heights can watch them online.

‘I usually shoot with my GoPro camera and Canon 600D, I want to show people that you shouldn’t look at the world from just one angle and there is something more than just walking through the streets.

‘Most people are delighted with my photos, they like to look at photos from a height, especially those who are afraid to climb themselves.’

Alex has gained a large online following for his outrageous stunts, which include hanging from the front of a 75mph train while listening to music on his iPhone.