Alex Thomson is hoping to make it fifth time lucky in the 28,000 mile Vendee Globe

Alex Thomson is grimacing and grinning through 500,000 miles of memories. Strange things happen at sea and by his estimation most of the stranger ones have happened to him.

‘In 2018, I was doing the Route du Rhum, which is a big solo race from France to Guadeloupe in the Caribbean,’ he says. ‘It is tough because I was only getting around two and a half hours of sleep a day for 11 days.

‘It got to right before the end and I had pretty much won but I had a sleep on the final approach. I was wearing a watch that gives you an electric shock when the alarm goes but in my exhaustion or whatever, I hadn’t charged it.

‘I woke with a thud. I jump up and look out of the cockpit and there was all this green stuff next to me. I’m thinking, “Is it a giant seaweed Island? What’s happened?” This is all just after waking and then it dawns on me – I had crashed into Guadeloupe. My boat is stuck in a cliff. Literally.

At the age of 46, Thomson has seen almost everything, with a notable exception being the view from the top of the hardest podium in all of sport.

Of the warnings that get rolled out every four years for the Vendee Globe fleet, which departs from France on November 8, most point out that 167 elite sailors have attempted this 28,000-mile solo race around the world and only 89 have finished.

It has been sold as the ‘Everest of sailing’ since its creation in 1989, but Thomson tends to object on the basis that more than 4,000 climbers have summited the mountain.

His personal infatuation with the race means this will be his fifth attempt to become the first non-Frenchman to win across nine editions and the considerable worry across the Channel is that Thomson, through hard knocks and big backing from Hugo Boss, has been shaped into the pre-race favourite.

With a £6million yacht capable of going twice the speed of the wind, and on foils that can fly the 60ft hull above the surface of the water, the sense is that a nearly-man among the world’s best sailors could finally have his day. 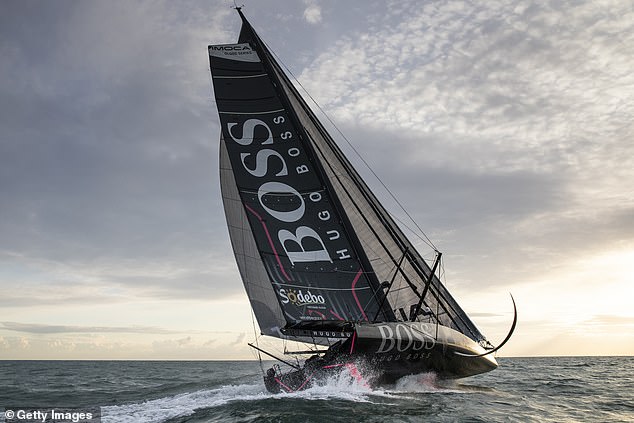 Thomson, with his £6million IMOCA Open 60 race yacht, is one of the pre-race favourites

‘I am going there to win but with this race it feels extremely arrogant to talk about winning,’ he says. ‘I’m confident in the boat and in me but I am not confident in Mother Nature.’

Which takes Thomson back to a list of his most surreal moments on the oceans.

‘An incident I had in 2006 was rough,’ he says. He is talking about his rescue from the wilds of the Southern Ocean by fellow Brit, Mike Goulding, during the Velux Five Oceans Race. The added context is that Thomson and Goulding had argued before the race.

‘My keel was falling out of the boat 2,000 miles from land, water is coming in and a massive storm was approaching,’ Thomson says.

‘As is often the case offshore, your nearest point of rescue is a competitor. The fact it was Mike was like a sign from above, ‘These two don’t get on so let’s put them together’. I had to abandon into a life raft and Mike saved my life. Another 12 hours, with that storm, who knows?

‘Where it got even more challenging was I hurt my hand in the rescue. Mike had just finished dressing it when I see this huge storm cloud approaching.

‘Next thing, the boat heels over and the mast snaps. Mike is out of the race as well now and he was amazing with me the whole ordeal, but for a moment I thought he would punch me.

‘That was pretty crazy. One of the maddest things I have had to deal with was five years ago in the Transat Jacques Vabre race (from France to Brazil).

‘I’m asleep and it’s pitch black inside. The next minute I have been hit by a rogue wave, the boat is flipped and I’m thrown around like a rag doll.

‘We were upside down, water is pouring in, the mast is broken and I really did not know what’s going on. You go into survival mode and figure out what you need to do but there’s always a moment where your head just races.

‘In that same race last year (the 2019 Transat), I had another big moment. We were out in the new Hugo Boss boat, doing our preparation for this year’s Vendee.

‘We were up against our rivals for 200 miles and we were the fastest boat downwind by a country mile, which is what you want to learn when you spend that much on a boat that doesn’t have a toilet. 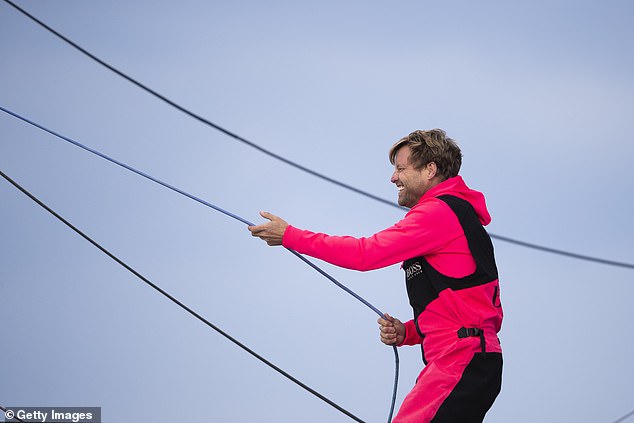 ‘Suddenly we hit something at 25 knots, likely a whale. We can measure deceleration and we stopped at 3G. We’ve had to put a seatbelt in the cockpit now for safety and a whale pinger on the keel – it sends out a signal at 150 decibels and the hope is a whale hears it and gets out of the path.’

It’s a true medley of the issues familiar to offshore veterans. As a father of two young sons in an inherently dangerous sport, Thomson admits it is getting ‘harder’ to leave the dock with age, and it is natural to speculate if his two-decade obsession with this race would end with a victory.

For his part, with half a million miles under the hull, Thomson tends to play down the risks.

‘When I get on that boat I don’t feel like this could be the end,’ he says. ‘I think we manage that risk pretty well.’

If his career is a testament to surviving difficulties, there is an ongoing wait for it to be crowned with a major win. Thomson has long been considered one of the quickest and most aggressive sailors in the solo circuit, and Hugo Boss have backed him with a boat that is arguably the most radical in the fleet of 33.

But it has been 21 years since Thomson became the youngest skipper to win a round-the-world race, having claimed the Clipper event aged only 24. In that time he has set world records for distance travelled in 24 hours but he has not won one of the classics.

‘That’s where the kids are great,’ he says. ‘One of my sons says, ‘You haven’t actually won a race have you dad?’

The general belief is Thomson would have taken the last Vendee had one of his foils not been sheared off after 11 days. He finished in 74 days, 16 hours behind the winner, and the estimate is the damage cost him at least two days.

This time, in a quicker boat, he thinks he will lap in 67 days barring any funny business from the sea.