Alexa Answers arrives in the UK

Amazon users in the UK can now try and answer questions that Alexa doesn’t know.

The US tech company has announced the general availability of ‘Alexa Answers’ in the UK – a crowd-sourced way of making its Alexa digital assistant more intelligent.

The online hub offers users the chance to pit your knowledge against the artificial intelligence and score points to climb up a leaderboard.

Users just need to sign in to their Amazon account at the Alexa Answers webpage and start browsing unanswered questions that they think they can answer.

The UK launch will help Alexa get smart on topics specific to the UK, including the Spice Girls and the two-pound coin, Amazon hopes.

Amazon has announced the general availability of Alexa Answers in the UK. The feature lets Amazon UK customers the opportunity to share their knowledge of topics they’re passionate about with the Alexa community by responding to questions Alexa doesn’t know the answer to

Since launching elsewhere in the world in 2018, including the US, hundreds of thousands of answers from the Alexa Answers community have been shared with Alexa customers millions of times, according to the tech giant.

‘There are lots of like small facts, things that sometimes don’t either sit into a traditional database, aren’t available through fact extraction or other sources that we do with ML to try to figure out and so this is a great way to try to fill in those gaps.’

To get started, Amazon customers need to sign in on the Alexa Answers page with the same login details as they’d use to buy groceries.

From there, they’ll be able to see a list of questions available to answer and can choose to filter the questions based on things like most frequently asked questions, newest questions or topic areas. 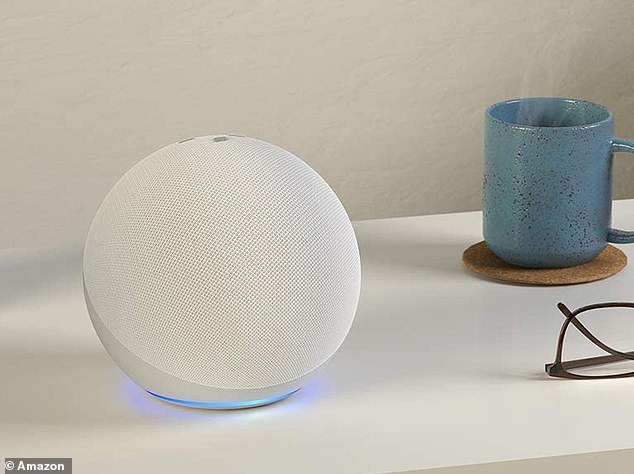 These include categories such as science, history, literature, music, popular culture and more.

Amazon said a question may be published on the Alexa Answers site if enough customers ask a question that Alexa cannot currently answer.

Once users have submitted an answer, they’ll be able to earn points toward monthly and weekly leaderboards, and badges, although they’re not given anything more substantial like tokens or money-off codes for online shopping.

Points given are based on how many questions a person has answered and how many times their answer has been shared with Alexa customers.

After the answer is entered into the database, Alexa will start relaying it to other users with the same query and an addendum stating that the data is ‘according to an Amazon customer’.

Amazon said Alexa Answers must meet certain guidelines and contributions will be monitored.

They may be automatically rejected if they contain obscene, threatening or defamatory content.

The Alexa Answer community itself is also able to flag an answer if inappropriate, incomprehensible or incorrect.

These reported answers are removed on the Alexa Answers site and will not be shared with Alexa customers.

Amazon will be relying on user input to weed out bad answers by employing an ‘up vote’ and ‘down vote’ system.

If an answer is down-voted frequently, the company said it will start providing fewer responses from the participants rather than banning them. 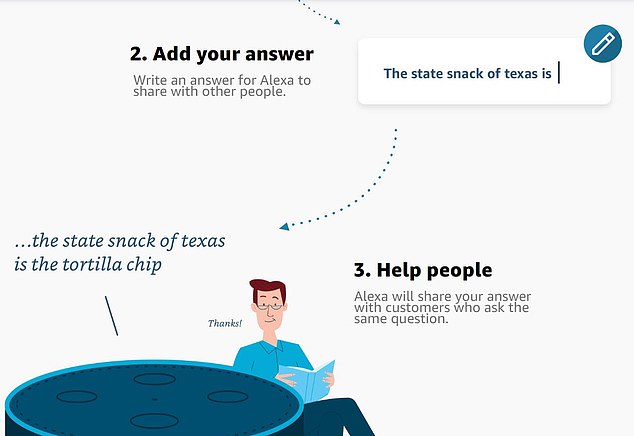 ‘We’re leaning into the positive energy and good faith of the contributors, and we use machine learning and algorithms to weed out the noisy few, the bad few,’ Bill Barton, Amazon’s vice president of Alexa Knowledge previously told Fast Company.

‘But we’re not going to suppress the magical experience we can give to 99 customers because one person had something different in mind.’

When Alexa Answers was officially launched in 2018, it was invite-only and included a relatively small pool of customers.

It was then made available for all US customers in September 2019 to increase the number of user-submitted answers.

Alexa Answers is being positioned as a way to expand the Echo’s range of expertise, making the device capable of answering a broader spectrum of questions and keeping up with smart speaker competitors like Google Home.

Q: ‘Alexa, what’s the second UK number one single by the Spice Girls?’

A: ‘Say you’ll be there’ was the second UK number one hit for the Spice Girls

•Q: ‘Alexa, how many counties are in Munster?’

A: ‘The Irish province of Munster has six counties: Clare, Cork, Kerry, Limerick, Tipperary and Waterford.’

A: ‘The UK equivalent of all-purpose flour is plain flour’

Q: ‘Alexa, what year was the two-pound coin introduced?’