Alexander McCall Smith could moonlight as a motivational guru. A couple of hours in the company of the author of the No 1 Ladies’ Detective Agency series would shame a Duracell bunny into upping its work rate. At 70, with more than 100 titles and 30 million book sales to his name, McCall Smith could be forgiven for resting on his laurels. Not a chance.

Just back from Nepal, where he and his wife visited the Gurkha Welfare Trust and trekked in the Himalayas, McCall Smith was up at three o’clock this morning, writing two chapters of his Scotland Street serial before most of us had our Weetabix. A routine shift yields 3,000 words. On a good day it can be as many as 5,000. He even writes in his sleep.

Alexander McCall Smith is a scrupulously apolitical writer, but there are moments in his forthcoming work The Department Of Sensitive Crimes where you glimpse a wider world view

‘I have strange narrative dreams that I sometimes use,’ he says. ‘I seem to be speeding up. I write almost every day, and I will write 3,000 words, sometimes more. I can often have done my day’s writing by seven in the morning. I just feel I want to do it, and I guess I need to do it. I have a whole stack of notebooks filled with lines and ideas.’

McCall Smith – Sandy to his friends – will publish ‘seven or eight’ books this year. He talks me through his itinerary, which runs to several printed pages and stretches into 2020. It includes premieres of operettas and song cycles he has written, a performance with his Really Terrible Orchestra, book launches, academic lectures, interviews and tours of Italy, India and America. A few precious weeks are protected: intensive writing stints at his second home overlooking a sea loch in the wilds of Argyll, and the Greek sailing holiday he takes each year with a handful of old friends. ‘It’s a boys’ trip – we go back to being 18. It’s such fun.’

He is a soothing, gentlemanly presence, dressed in striped blazer and comfy cords. The walls of the writing room in his substantial Edinburgh home are filled with books and gold-framed portraits. The windows look out on one of the city’s more rarefied streets in an area populated by Scotland’s literary titans. Ian Rankin lives a few doors down. J K Rowling used to reside just around the corner. Kate Atkinson lives nearby. He sees them all socially from time to time – ‘we don’t talk about our books’ – as well as, perhaps more surprisingly, Edinburgh’s one-time enfant terrible of letters, Irvine Welsh. ‘I always like to see him, I get on very well with Irvine.’ 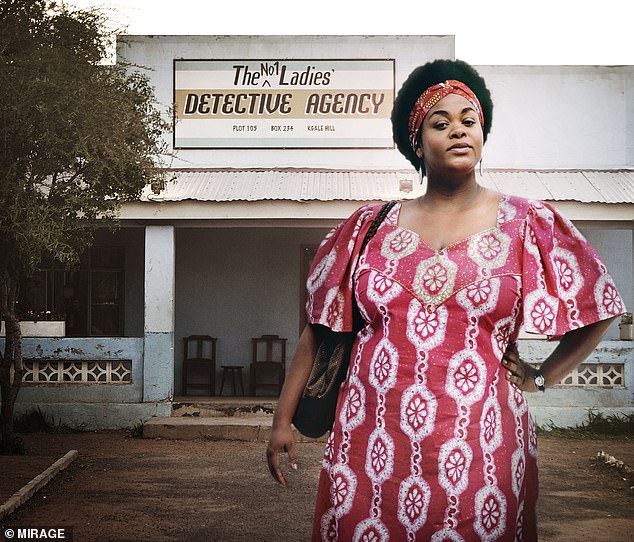 Jill Scott as Mma Ramotswe in The No 1 Ladies’ Detective Agency. MacCall Smith says: ‘Some people have said, how can you write about a society that you are not a member of, but I don’t agree with that argument. Actually, people always do that’

In literary terms, Smith is less Trainspotting, more Flying Scotsman. There are no junkies and cut-throats in his world. The No 1 Ladies’ Detective Agency books, featuring unconventional Botswanan detective Mma Precious Ramotswe, promote kindness, humour and courtesy over gritty realism. His latest novel, The Department Of Sensitive Crimes, is a gentle twist on Scandi-noir. Where the genre tends towards extreme violence, psychosis and sexual transgression, McCall Smith has coined his own version, ‘Scandi-blanc’, in which Malmo-based detective Ulf Varg and sidekick Anna Bengsdotter meander philosophically through a series of absurd minor crimes. There is, however, a serious subtext to it all.

‘I don’t like violence,’ he says. ‘You don’t need bodies in crime fiction. It should reflect the harsh face of our times, as well as the other, but I do think that just focusing on the deeply pathological does not reflect reality. You could argue that the vast majority of crimes are very minor, petty matters. Murder is very unusual. Something like Morse or Lewis or Endeavour represents a gross misrepresentation of the crime rate in Oxford. Or Midsomer! These tiny little villages whose populations would be decimated.’ He laughs. ‘I take the view that crime writers should be writing about more mundane crimes, like parking offences. That’s the real bread-and-butter stuff.’

His dedication to civility delights his millions of fans, but it has also attracted a degree of criticism. For some, McCall Smith’s world is a little too cosy and old-fashioned, reflecting a comfortable, perhaps rather privileged life. He was born and educated in Rhodesia in the days when it was still a British colony, the son of the public prosecutor. He moved to Edinburgh as a student and has been married to Elizabeth, with whom he has two grown-up daughters, for nearly 40 years. 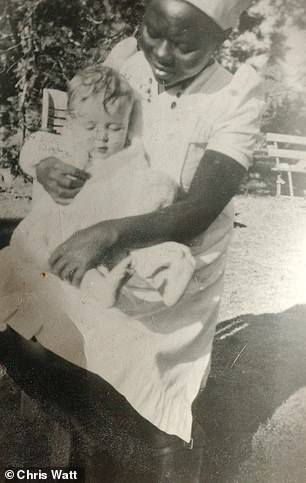 A young McCall Smith in Rhodesia

‘I’m fortunate in that for most of my life I have been fairly happy,’ he says. ‘Like anybody, I have had periods of relative unhappiness, but not acute. Obviously what you write is never going to appeal to everybody, but if people think that an emphasis on civility is old-fashioned I would just disagree. We need civility. People are too embarrassed to talk about civilisation, but it is a very, very important concept. Destroy it and you will certainly know what you are missing.

‘We are seeing a certain amount of incivility in our public life these days and we don’t like it. I find it very distressing that our political discourse has become so confrontational and extreme. It’s very easy to be an extremist and be uncivil to other people. These things are pretty basic.’

McCall Smith is a scrupulously apolitical writer, but there are moments in Sensitive Crimes where you glimpse a wider world view. At one point, Varg says: ‘Nostalgia and reactionary sentiment could come perilously close.’ A comment on Brexit Britain, perhaps?

‘That wasn’t my intention, but you have to be careful about nostalgia,’ he says. ‘It can lead you to a political or social position where you are intolerant of change, where you wouldn’t have to accept that we are where we are. I think a lot of societies are uncomfortable about the pace of change and the loss of certainty and identity. That is something that can destabilise people and make them anxious. That has happened in the United States, and to a certain extent not just in Britain but in Western Europe generally. You interfere with people’s sense of themselves at your peril.’

For many years, when McCall Smith was Professor of Medical Law at Edinburgh University, writing was a sideline. He had already published more than 30 children’s books before he started writing for adults. But it was the huge success of The No 1 Ladies’ Detective Agency, published in 1998, that changed everything. Set in Botswana, where McCall Smith lived in the early Eighties, the books are intended as ‘works of admiration for a society. They have done really well since independence in 1966. It has steered this very cautious course and observed the rule of law. They are very modest, courteous, kind people’.

The master of the unexpected twist is back with a page-turning thriller that never goes quite where you expect.

Allison has survived the plane crash – so why is she still in fear for her life? A relentlessly tense debut. 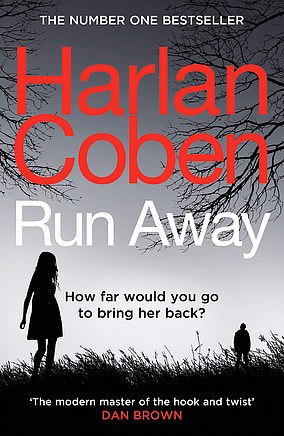 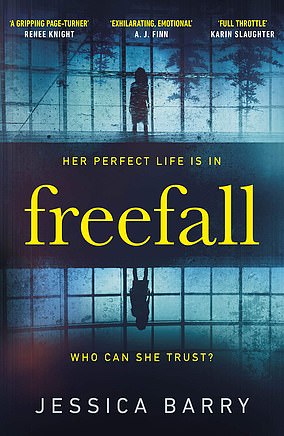 Run Away by Harlan Coben; Freefall by Jessica Barry

A Friend Is A Gift You Give Yourself

In a world of identikit psychological thrillers, Kelly delivers the real deal with this constantly surprising tale of buried secrets.

The Killer In Me

The second instalment in a sharp new series with Dublin DCS Frankie Sheehan sees her juggling a cold case – and an all-too-live one.

Should a rich white Brit attempt to portray the experience of relatively poor black Africa? ‘Some people have said, how can you write about a society that you are not a member of, but I don’t agree with that argument. Actually, people always do that. Look at Alistair Cooke’s Letter From America, or Bill Bryson writing about this country. It’s completely normal to look at someone else’s reality and portray it in fiction. I think a writer should be able to write about anything really.’

The No 1 Ladies’ Detective Agency series has become a small industry. This year McCall Smith will publish the 20th instalment, while the books were turned into a feature-length TV film in 2008, directed by Anthony Minghella, co-written by Richard Curtis and produced by the disgraced Hollywood producer Harvey Weinstein. A six-part BBC series followed. He met Weinstein several times. ‘An unusual man,’ he says. ‘I had no idea about all these things going on, by the way. It wasn’t always easy to deal with the Weinstein company. We found ourselves a bit frustrated.’

McCall Smith is now developing a Broadway musical based on the books, in collaboration with composer Graham Weir, a former member of Orchestral Manoeuvres In The Dark. ‘I have great hopes for this,’ he yells, leaping up to play me several terrific demo tracks. Beaming and tapping his toes with delight, he looks utterly transported. The hardest working man in literature clearly has no intention of slowing down any time soon.