ALEXANDRA SHULMAN’S NOTEBOOK: My spat with the fashion god Karl Lagerfeld – all written in longhand

Karl Lagerfeld’s death has generated floods of anecdotes from anyone who ever came anywhere near him.

But then there is nothing like death to bring out claims of close encounters with a famous person.

My own relationship with the long-time creative director of Fendi and Chanel was entirely professional.

My own relationship with the long-time creative director of Fendi and Chanel was entirely professional. Karl Lagerfeld’s death has generated floods of anecdotes from anyone who ever came anywhere near him.

He had many friends and colleagues who were with him for decades, amounting to family.

That didn’t include myself but, even so, at each Paris fashion week I attended as Vogue editor I would be greeted by a satellite dish-sized basket of ravishing flowers when I entered my hotel room. 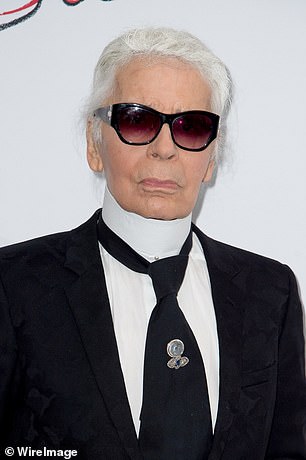 On a few occasions we locked horns over something I had published that Karl Lagerfeld, above, didn’t like, and once he fell into a fury and wrote that nobody would ever buy my magazine again

There was always a handwritten note on personalised notepaper which normally, but not always, mentioned something appreciative about the magazine, showing that he had taken the time to look at it properly, and not just to see how much of his own work appeared.

On a few occasions we locked horns over something I had published that he didn’t like, and once he fell into a fury and wrote that nobody would ever buy my magazine again.

I remember being urged, by a desperate aide, to write to apologise – ‘but handwriting only, Alex. Don’t type it’.

I duly handwrote a letter pointing out that I was sad that he didn’t approve of how I was doing my job but luckily vast numbers of other people – Vogue’s readers – did.

I suppose Jeremy Corbyn and Theresa May must feel the same about the MPs quitting Labour and the Tories over their leadership but I was right and they are wrong.

Karl had no qualms about spending money on himself and at Chanel. For 36 years, he stayed at the head of the most successful fashion house of our times by understanding that most people like to show off their wealth.

While doing some research the other day, I came across a column I had written in 2005. It was about how professional, private-school-educated people were terrified of being considered posh. And how het up we all were about the idea of an Old Etonian (David Cameron) becoming the next Prime Minister.

I suggested that wearing a Chanel jacket would be as helpful to a successful political career in this country as a touch of leprosy, and a private education was an embarrassing inconvenience, not something to be flaunted. This was 14 years ago, and depressingly I could have written it today.

This particularly British form of self-flagellation is bitter and patronising and undermines the many people who work hard to give their family the best in life.

I’m sure that my grandparents, who were impoverished, non-English speaking Jewish immigrants from Ukraine, would have been delighted that their son (my father) had done well enough to live in Central London, pay for his children’s education and give us the trappings of luxury he never had.

Now, whisper who dare, that you are privately educated (go straight to the bottom of the candidate list!), or appear in a responsible position in public life wearing expensive clothes. Our relationship with money and privilege is as tangled – and as nonsensical – as a cat’s cradle. 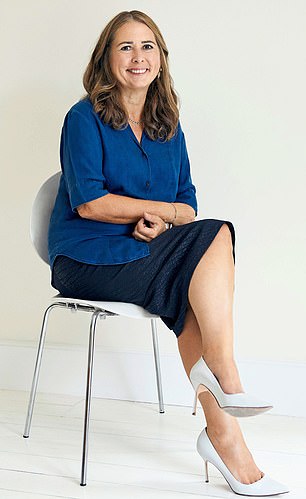 I no longer look like the picture on this page (above). Not that I ever looked much like it as the photographer did a terrific job on the retouching

My new haircut’s a guaranteed flop

I no longer look like the picture on this page. Not that I ever looked much like it, as the photographer did a terrific job on the retouching, but last week I chopped off most of that long hair.

I think I like the result, but no haircut can ever really live up to expectation because it isn’t just a changed hair-do that we seek from the scissors but the righting of everything we find wrong with our appearance.

Longer legs, flatter stomach, fewer bags under the eyes, tighter jaw… shall I continue? No matter how good the cut, sadly it’s not going to achieve all of that.

The PR power of tying that knot…

I’m curious about how the word bride carries so much resonance. Were Shamima Begum an Islamic State girlfriend rather than bride, would the case have attracted the same amount of attention?

ONE morning last week, I spoke to a friend in the countryside who told me how lovely the deer were she could see out of her window, leaping across the fields in the sunshine. How gorgeous, I thought, coming over with visions of Bambi. ‘Yes,’ she continued, ‘we have 300 of them here for Waitrose.’

Rock will crumble without bad boys

It’s been an extraordinarily long time coming but the music biz is now having its #MeToo moment.

I briefly worked in that industry straight after university and I didn’t experience any sexual advances, desired or otherwise (slightly to my disappointment at the time).

All the same, it’s hard to picture the rock business without sexually predatory behaviour. Heavens, the existence of groupies even institutionalised it.

While the world might have been a better place without some of the antics of powerful male rockers, certainly the songs they wrote would be a great deal weaker if they’d been better behaved.

Where would we be without lusty tales from Johnny Cash, The Eagles, Led Zep, Rolling Stones, even Bob Dylan, or the man-done-me-bad contributions from Dolly Parton, Joni Mitchell, Adele etc.

And without her relationships with some of the most prolific lotharios of the age, including Warren Beatty and Mick Jagger, would Carly Simon have ever written You’re So Vain, one of the greatest songs of all time?

Mosquito bites, the new love of my life

Anyone who gets badly bitten by mosquitoes is going to have a tricky time getting their mind around the news that our insect population is being decimated, destroying the bottom of the food chain and endangering our future.

Half of my holiday luggage is taken up with toxic sprays and, as far as I’ve been concerned, no death is too good for them.

Now though, I wonder if I should take one for the planet, ditch the poisons and learn to love a mozzie and my bites.