Piers Morgan and ex-USMNT captain Alexi Lalas have weighed in on how far England and the US will go in the 2022 World Cup after both countries booked their spots in the Round of 16 to extend their stay in Qatar.

The Three Lions beat Wales 3-0 to finish top of Group B while the USMNT sealed a narrow 1-0 win over Iran to progress to the knockout rounds.

‘Of course, it’s England,’ Morgan told Fox Sports’ Katie Abdo when asked who’ll go further into the tournament between the Three Lions and the Red, White and Blue.

‘We’ll beat Senegal then we’re into the last eight. You, I think sadly, I think the run will end and honestly I do, against the Netherlands, they’re a good team, and they’re probably more experienced at this kind of level of tournament football.

‘But I do think you had a very young team and today’s average age is 24. I’ve been very excited by the way Team USA play. If you had a striker I would back them to go further.’ 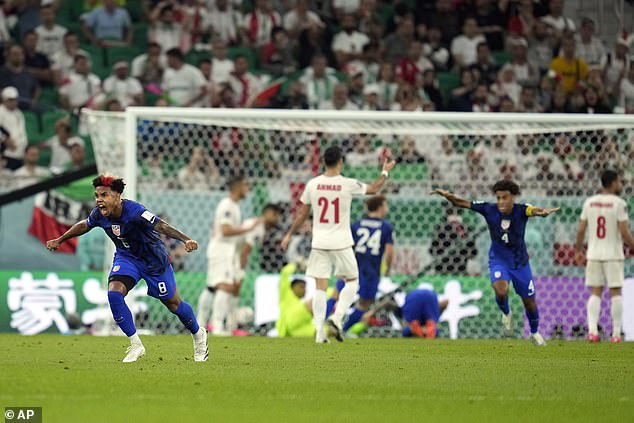 ‘You’ll be very excited when the United States beats the Netherlands and you guys bomb out against Senegal. We can come back here and have a big, ol’ party,’ Lalas replied, adding that the Star and Stripes play better when they’re ‘underdogs’, much like ahead of the 0-0 draw against England last week.

On Tuesday, the US beat Iran, all thanks to a first-half strike from winger Christian Pulisic while England thumped Wales to claim first place.

Wales, which was playing at the World Cup for the first time in 64 years, finished last in the group and third-placed Iran also crashed out of the tournament.

Asked if Gregg Berhalter’s young side had a ceiling ahead of Saturday’s game against the Netherlands, Morgan said: ‘Well, I think the problem remains for the United States that you don’t have a bonafide striker.

‘And there were quite a few missed chances, I thought. [Tim] Weah missed a couple. Quite an easy header. Another shot a bit later on. I thought yeah, he’s not a natural finisher. If you had a natural finisher, I honestly think you would have a really good chance, the United States, of progressing quite a long way. 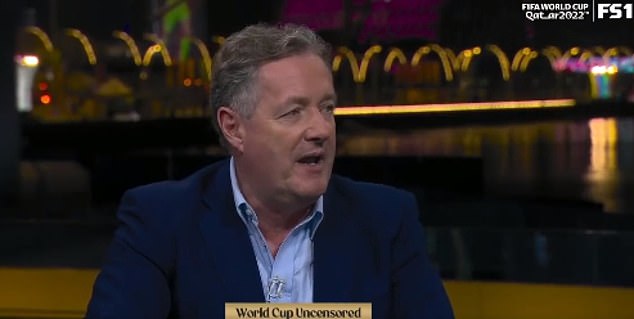 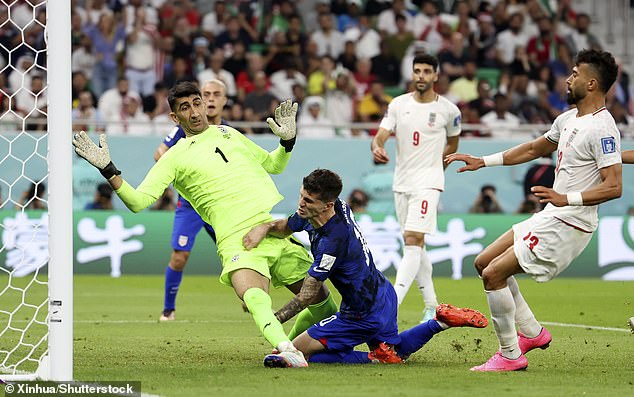 ‘Without a finisher [though], when you get to knockout stages, you’ve got to have someone that can score goals, and I thought tonight the goal that was scored was brilliant. The header [and the] pass. One of the best things I’ve seen in this World Cup but I’m worried about their progress based purely on the lack of strikers.’

‘We have the opposite problem,’ Morgan then said of England’s attacks. ‘We’ve got strikers coming out of our ears so we’re in a better position.’

Lalas didn’t seem to agree with his counterpart, letting him know that the Three Lions’ main striker, Harry Kane, has yet to score a goal in his three starts in Qatar.

‘You beat up on Iran in a completely different type of scenario and moment, right?  And then Wales…it’s Wales, right? And it’s the third game. OK, so you’re supposed to do that.

‘Look the ceiling, ultimately, I think is you’re gonna need some help. To Piers’ point, we don’t have a true goal scorer. But no matter what, when we get into the round of 16 facing a team like the Netherlands, they’re going to be the favorites.’

‘Now the interesting thing about our US team is that we actually play the best when we’re underdogs, when people don’t expect us to do well.’

Back in the World Cup after missing the 2018 tournament, the US has never reached the semifinals other than in at the inaugural competition in Uruguay in 1930 – the team’s best-ever finish ever on the international soccer stage.

Meanwhile, the US Soccer Federation said Pulisic was diagnosed with a pelvic contusion, returned to the team hotel and is day to day ahead of team’s first knockout game against the Dutch.

Ahead of Saturday’s fixture, the US is 1-4 against the Netherlands, all were played as friendlies.