When it comes to Halloween outfits, this one is going to be hard to beat.

Alicia Silverstone rolled back the years as she dressed as her character Cher on Saturday night, in her iconic yellow plaid skirt suit.

The outfit will be instantly recognizable to a generation who grew up watching the 90s classic teen movie.

Among them is Alicia’s pal Chrissy Teigen, who certainly approved of the choice.

‘How am I supposed to sleep? I think I’ve asked for 2 photos in my entire life. Alicia Silverstone and Beyonce,’ she wrote on Twitter.

The  two posed for a picture backstage during a break from filming an episode of Lip Sync Battle, which will be broadcast in January.

The image showed a delighted Chrissy, 31, holding her one-year-old daughter Luna, alongside Alicia, 41. 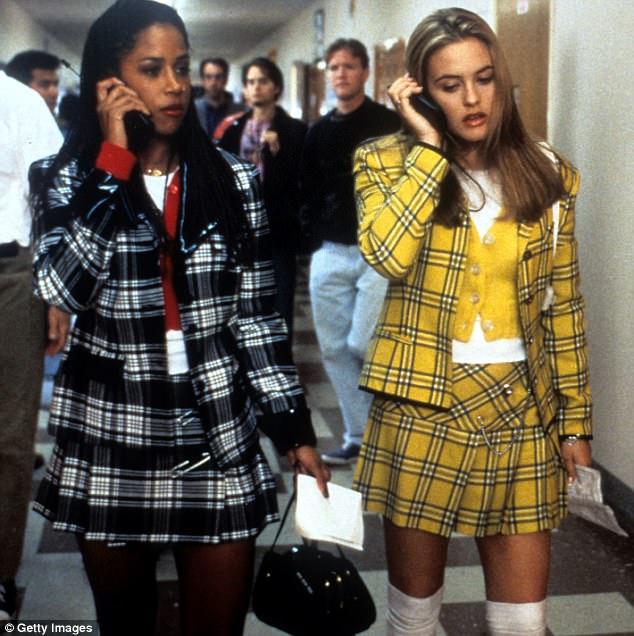 Iconic: Alicia is seen with co-star Stacey Dash in the 1995 teen classic

The 38-year-old and little Luna snuggled under a warm blanket as they watched filming take place, with the infant wearing noise cancelling muffs to protect her delicate ears.

Clueless was a worldwide hit – thrusting Alicia into the spotlight.

Talking about her instant fame, she said in June: ‘I was young and I thought it was really overwhelming and it was really intense. I did a bunch of movies, and then nine movies later, I did Clueless. When it’s like, “That’s Alicia Silverstone!” everywhere I went, it was a lot for a little person.

‘But then life goes on and you figure it out.’

Alicia also revealed the iconic movie was almost never made, telling Variety: ‘One studio said no to it, they didn’t think anyone was interested in watching a movie about a young girl. Those people now kick themselves that they were not part of that film. ‘

But for Alicia, now an animal rights activist, the movie ultimately transpired to be a life-changing moment, transforming her from a little-known actress into a worldwide star.