The footage shows what appears to be a pattern of bright lights hovering above the Nasa run base.

Moments later, a red beam of light seems to pulse from the object toward the habitat, occupied by astronauts from five space agencies.

Strange footage has captured the moment conspiracy theorists say an alien mothership shot a laser beam at the International Space Station. The clip, which had amassed around 25,000 views, was posted to YouTube by UFO hunter Streetcap1

While it is not always possible to determine exactly what these objects are during the brief period they appear in the stream, there are a number possible explanations for these types of sightings.

In the past, a Nasa spokesperson has explained, ‘Reflections from station windows, the spacecraft structure itself or lights from Earth commonly appear as artefacts in photos and videos from the orbiting laboratory.’

The footage, which had amassed around 25,000 views at the time of publication, was posted to YouTube by UFO hunter Streetcap1.

Speaking in the clip, he said: ‘Look at the red light coming from them and going to the space station. It’s pretty strange.

‘In the previous shots hours ago there was no evidence of it at all.

‘It could be lens flare, but I can’t see what was causing it.

‘Its shape was what was most interesting to me.’

The ISS, which orbits 200 miles (320km) above the Earth, did not appear to be affected by the impact of the ‘laser’.

The object said to fire the weapon appears to resemble other alleged alien craft spotted near the ISS.

Many of these have been debunked as lens flares or reflections of the ISS itself.

The footage sparked a debate among viewers of the clip.

User Cindy WH-Witter said: ‘I’ve wondered many times if the ISS has been contacted and/or visited, docked, by a ‘visitor.’

‘What was that red beam? All of the astronauts on the ISS have info we can only imagine about.

‘That beam could be anything from information or even teleportation.

‘That beam is real, the only definite we have!’ 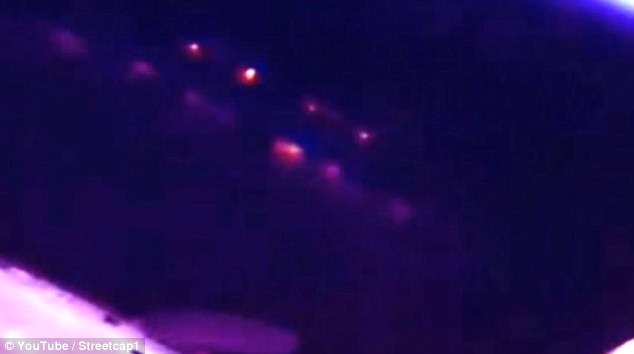 The footage shows what appears to be a pattern of bright lights hovering above the Nasa run base. Moments later, a red beam of light seems to pulse from the object toward the habitat, occupied by astronauts from five space agencies

Captain Jay added: ‘The color red is able to store data at the highest level and possibly what you caught was a communication transfer of data or a probing beam to collect data.’

Not everyone was convinced an extra terrestrial explanation was in order.

Erika Demiral said: ‘Is it possible its a reflection of electrical panel inside the ISS?’

James Mcintyre added: ‘So much BS why is it that every video of so called UFOs is either too Blurry out of focus show me a video in HD not that I’m gonna hold my Breath.’

This not the first time that a UFO has been seen near the space station.

A mysterious object was spotted entering Earth’s atmosphere by one of the crew of the International Space Station back in November.

Despite assurances from the space agency that it is just a meteor, conspiracy theorists remain convinced that it is evidence of extra terrestrials. 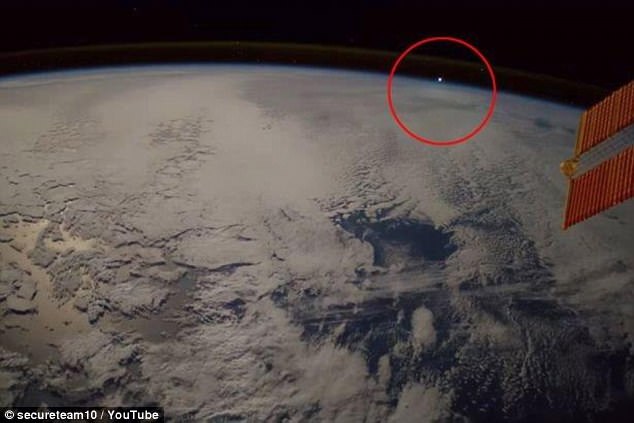 Nasa has once again been accused of covering up the existence of alien life, after an astronaut captured footage of a UFO. The mysterious object (circled)  was spotted entering Earth’s atmosphere by one of the crew of the International Space Station

SectureTeam10 is one of the most viewed YouTube channels, with over 785,000 people subscribing to its conspiracy videos.

But the channel has come under fire, as Lions Ground, a rival channel, claims that it has been intentionally fooling its viewers.

According to Lions Ground, SecureTeam10 has been raking in an estimated £600 ($745) a day by posting fake videos that ‘outsmart UFO believers.’

Italian astronaut Paolo Nespoli shot the clip, which shows a fiery ball of light racing towards the Earth’s atmosphere.

The ISS crew member believes that the object could be space debris, but both the space agency and alien enthusiasts have rejected this explanation.

Tyler Glockner, who runs alien hunting YouTube Channel SecureTeam10, believes it is more proof of a government conspiracy to hide the existence of aliens.

Nasa has previously been accused of covering up an alien sighting after a video surfaced showing six UFOs passing the ISS live-stream, seconds before the feed was cut and replaced with images from a camera showing the inside of a briefing room.

Although the footage of the most recent sighting came from Nasa, conspiracy theorists are suspicious over how quickly they released it to the media.

Speaking in a video uploaded to the SecureTeam10 channel, Mr Glockner said: ‘I don’t think it’s a meteorite at all.

‘What many people may not realise is that this video is a timelapse.

‘You’re seeing the earth spinning at a high rate of speed and we see this flash of light coming from space.

‘But when you account how fast the earth would have actually been moving, had this not been sped up, it would have been moving much, much slower.

‘Speeds that are slower than even the slowest meterorites.

‘Why did they do this? Why were they so adamant about publishing this when when they’ve never jumped on a story so fast?’

Mr Glockner also says that the round ball is coming in at too steep an angle to be a meteorite.

In the video, he compares the object to another meteorite that fell to Earth during the 2011 Perseid meteor shower.

In this clip, the characteristic tail of a meteor that is missing from the ISS object can clearly be made out.

Mr Glockner added: ‘If you compare this to what they are calling a meteor in this new footage, at no time does this so called meteor look like anything that was captured back in 2011 – it just doesn’t.

‘It’s a short, stubby object that looks nothing like the other meteor here. 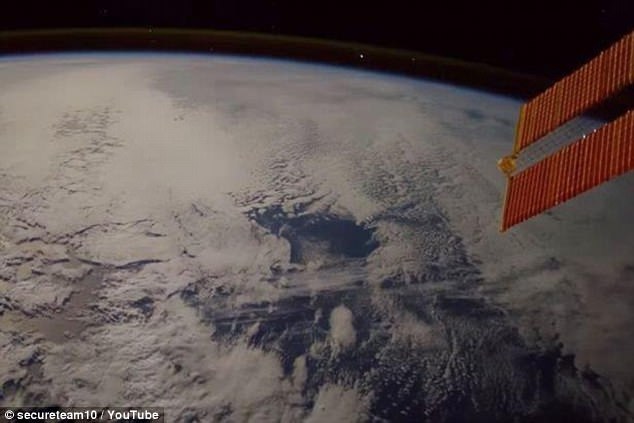 Italian astronaut Paolo Nespoli shot the clip, which shows a fiery ball of light racing towards the Earth’s atmosphere 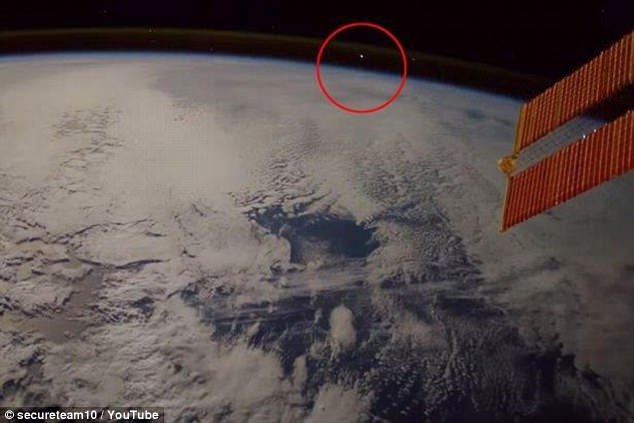 Tyler Glockner, who runs alien hunting YouTube Channel SecureTeam10, believes it is more proof of a government conspiracy to hide the existence of aliens 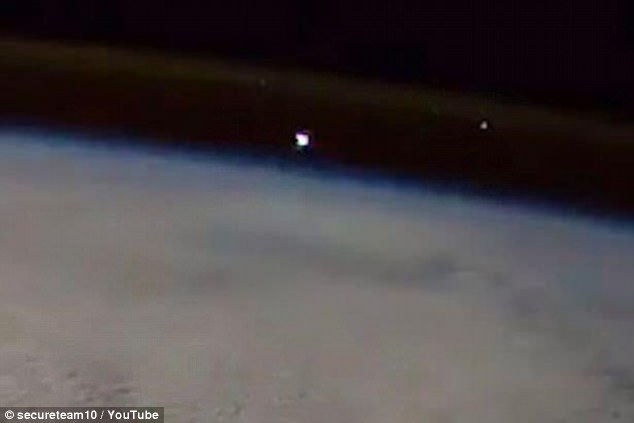 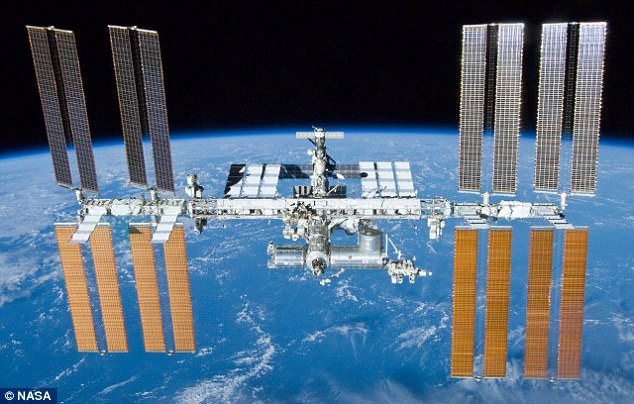 ‘We can see this discharge, the energy coming from here vanish.’

Not everyone agreed with the paranormal explanation on offer.

Speaking to MailOnline Nigel Watson, author of the UFO Investigations Manual, said: ‘Nasa can’t win when it comes to dealing with UFOs.

‘In this instance, SecureTeam10 are complaining that the agency rushed to release the footage and has only put forward a meteor as the explanation.

‘I’d rather believe Nasa than SecureTeam10 any day.

‘Even if it was debris, it doesn’t turn it into a extraterrestrial scoutship filled with tentacled aliens on a mission to invade our planet, which is what SecureTeam10 imagines every time they see a blob of light filmed by Nasa cameras.’

People who doubt the moon landings are more likely to be selfish and attention-seeking, according to a study earlier this year.

Over the course of three online-based studies, researchers at the University of Kent showed strong links between the belief in conspiracy theories and negative psychological traits.

Writing in the journal Social Psychological and Personality Science, the team explained: ‘Previous research linked the endorsement of conspiracy theories to low self-esteem.’

In the first study, a total of 202 participants completed questionnaires on conspiracy beliefs, asking how strongly they agreed with specific statements, such as whether governments carried out acts of terrorism on their own soil.

Alongside this, they were asked to complete a narcissist scale and a self-esteem assessment.

The results showed that those people who rated highly on the narcissism scale and who had low self-esteem were more likely to be conspiracy believers.