They are battling out the libel trial of the decade. But Johnny Depp and Amber Heard have not let their clashes in court spoil their enjoyment of life in London.

Depp, 57, was staying in a £2,000-a-night suite at the Savoy at the start of the trial, but soon moved to the Corinthia around the corner.

The seven premium suites cost up to £20,000-a-night for the Royal which has four bedrooms and bathrooms – making it perfect for someone like Depp who is constantly in the company of a two-man security detail.

All suites come with a butler and access to a private walk-in wine cellar. Staff at the Corinthia are fond of the actor and say he is always polite and friendly. He has been ‘staying in’, eating room service. His favourite food is fried chicken or anything Mexican.

In contrast to his hell-raising days, he is going to bed by 11pm to be fresh for court.

Miss Heard, 34, has chosen to stay at the trendy boutique Ham Yard Hotel where rooms are designed by acclaimed interior expert Kit Kemp. She is pictured with her girlfriend Bianca Butti

Miss Heard, 34, has chosen to stay at the trendy boutique Ham Yard Hotel where rooms are designed by acclaimed interior expert Kit Kemp and suites cost up to £4,500-a-night. The rooms overlook the hotel’s pretty courtyard. There is a well-regarded spa on site and a hairdresser who may be responsible for Miss Heard’s elaborate signature plaits.

Among those testifying for Depp is Stephen Deuters. The 41-year-old Briton has been working with Depp for 15 years and is now European president of the star’s movie production company Infinitum Nihil.

Deuters and his film executive wife Georgina – known as Gina – live in north London. When Depp was spotted at a pub in Belgravia last Sunday he was with Gina. Their group spent all afternoon in a private room at the Alfred Tennyson.

Depp emerged sporting a large Rasta-style hat and puffing on a hand-rolled cigarette. He was followed out by Gina, 42, who was driven back to the Corinthia with him at about 8pm. This week she declined to comment on Depp.

The actress is accompanied by girlfriend Bianca Butti, whom she has been dating for seven months. They were first spotted kissing in California in January.

While in London, they have fallen into the habit of taking late afternoon walks after court finishes to tourist landmarks such as the House of Commons. They’ve also been browsing in Oxford Street.

Miss Butti, 38, has worked in Hollywood as an actress, set designer and film-maker.

She was diagnosed with breast cancer in 2015 and ran an Instagram account called @buttibeatsit covering her fight. Her cancer returned last year and there is a GoFundMe page seeking money to pay for her treatment. 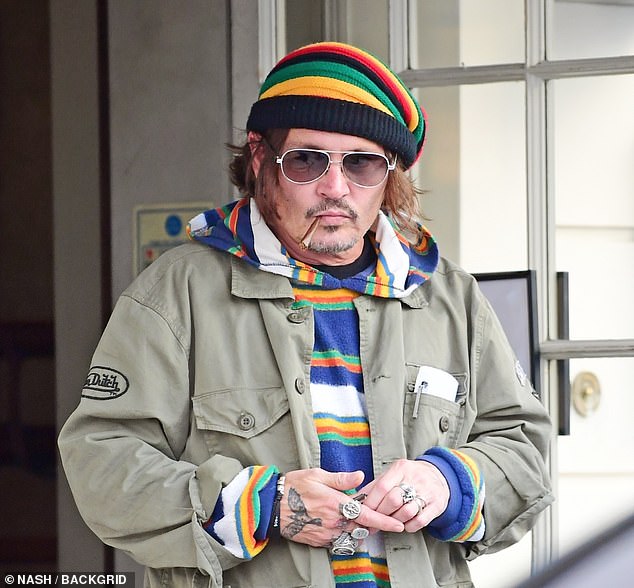 Depp, 57, was staying in a £2,000-a-night suite at the Savoy at the start of the trial, but soon moved to the Corinthia around the corner

Guitar hero Jeff Beck has been lending support to Depp behind the scenes.

The Hi Ho Silver Lining star, 76, had Depp to stay at his house in Sussex in January and the actor also spent time with him immediately before the case started this month.

Depp is a guitar enthusiast and plays in a band called the Hollywood Vampires.

Beck played on their 2019 album and Depp previously stayed with him in early 2019 when the actor was spotted at the local pub wearing a cowboy hat and scarf.

Earlier this summer, he spent time at Beck’s mansion with the guitarist and wife Sandra in order to prepare for court and enjoy jamming sessions.

The two men released a cover version of the John Lennon song Isolation in May.

The libel battle against The Sun arises from an article which criticised Depp’s author friend JK Rowling for continuing to cast him as Gellert Grindelwald in the Fantastic Beasts films. Rowling has spoken in support of Depp. She bought his yacht in 2016.

Australian author Kathy Lette is a close friend of Miss Heard’s barrister Jennifer Robinson and organised a party for her two weekends ago at her north London house.

Miss Butti went, as did TV host Sandi Toksvig and her wife. Miss Lette denied that singer Kylie Minogue dialled in on Zoom.

Meanwhile, Cherie Booth, the QC and wife of former Prime Minister Tony Blair, has talked to Miss Heard’s legal team ‘in a personal capacity.’ She met the actress at an event in New York last year.

Miss Heard has also been in contact with Labour MP Jess Phillips. Both women are campaigning to stamp out domestic violence.

Depp’s controversial lawyer Adam Waldman has been front and centre in the trial. He is understood to be staying with him at the Corinthia.

The two men have been friends for three years and Waldman has presided over legal actions against Depp’s former manager and lawyer.

Miss Heard’s sister Whitney Henriquez travelled with her to lend support and was a witness in court this week. Whitney had a ringside seat for much of the marriage and lived in one of Depp’s apartments in Los Angeles. She has a young daughter Hunter. Amber and Whitney went out to a Mayfair club until 1.40am in the first week of the trial.