Kate Winslet is a wealthy woman, with the lifestyle to match

She lives in a Grade II-listed house of such magnificence it is valued at more than double the price of Rolling Stone Keith Richards’ nearby mansion.

She holidays in five-star resorts, is worth around £35 million and spent a reported six-figure sum on legally suppressing ‘innocent but embarrassing’ pictures of her posh husband partly naked at a fancy dress party.

Yes, Kate Winslet is a wealthy woman, with the lifestyle to match — one that, no doubt, provides much enjoyment to her third husband, Ned Rocknroll (nephew of billionaire Richard Branson), and her three children: Mia, 18, Joe, 15, and Bear, five.

Yet, she now says — possibly half in jest — that she is repulsed by the very idea of wealth.

In a Radio Times interview to accompany an episode of genealogy documentary Who Do You Think You Are?, Kate, 43, says she ‘would have been upset or disgusted’ to have found money or royalty in her family tree.

Instead, she sobbed when she discovered a Swedish great-great-great-great grandfather, Anders Jonsson, was an impoverished stable groom. His son had died of malnutrition aged three — and Kate says she felt a ‘really profound blood-connection’ to her long-distant relatives.

Kate also celebrated the fact that (although she, her parents and her grandparents all lived in Reading, Berkshire) this made her an ‘immigrant’.

‘My roots are socialist, working-class and, in a funny way, my parents frowned upon the wealthy,’ she said.

All very laudable. The problem is, that what Kate thinks of as ‘socialist’ and ‘working class’ may not be quite what the rest of us do.

Take her grandfather, for instance. He was a successful dentist and prominent local dignitary, a member of a local ‘Order of Druids’ lodge that seems to have been a quasi-Masonic association, the chairman of two theatre companies and president of the local angling society.

Her other grandfather worked in a gentleman’s outfitters in the town and lived in a three-bedroom terrace house now worth £285,000. 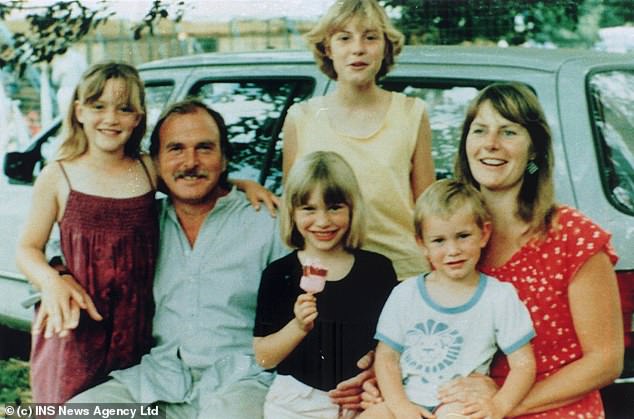 Kate was born in Reading in 1975. Her mother, Sally, was a nanny and waitress, and her father, Roger, a jobbing actor (pictured: Kate, far left, with her ‘working-class’ family in 1982)

Kate was born in Reading in 1975. Her mother, Sally, was a nanny and waitress, and her father, Roger, a jobbing actor. She was raised in a three-bedroom terrace house, now valued at just under £500,000. She also attended a fee-paying school — more of which later.

However Kate is insistent on the topic of how proletarian she is, telling Radio Times: ‘Mum and Dad went to Oxford for their honeymoon and we always had holidays out of the back of the van with a tent.

‘We had wonderful times camping in Cornwall and France. We never went anywhere as a family that involved getting on a plane, ever, ever, ever.’

Of course, many middle-class families of this era never holidayed anywhere but Cornwall or France — it’s hardly proof of poverty.

Yet it’s a theme to which Kate — perhaps embarrassed by her fame and wealth — likes to return.

In a 2009 interview, granted when she was living in a £2 million New York apartment with her second husband, director wunderkind Sam Mendes, she asserted that she was absolutely ‘working class’.

She told Marie Claire magazine that her father’s career was badly affected after his foot was crushed in a canal boat accident.

‘They operated on him for 18 hours. From then on he was a disabled actor, so the little work he was getting — like an episode of Casualty, Crimewatch — even that started getting less and less.

‘My dad was very much a struggling actor, and spent more of his life as a postman, as a member of a Tarmac firm, as a van driver. He’d sell Christmas trees. Anything. That was my dad.

‘We had these dreadful second-hand cars that would always die a death, or we’d go on holiday to Cornwall, come back and it would have been nicked. 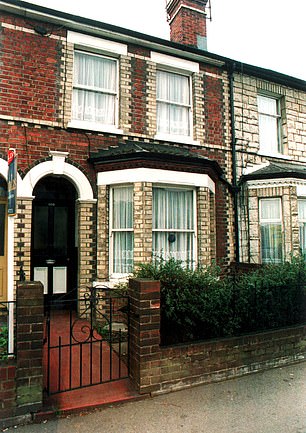 ‘Honestly, it was hand-me-down shoes and 10p pocket money on a Saturday that didn’t go up until I was 11.’

For further proof of her humble roots, Kate added that tea was served strong and in ‘mismatched mugs’.

Her education might be cited here. She attended fee-paying drama school Redroofs in Maidenhead, Berkshire — where fees now stand at £5,402 a term — from the ages of 11 to 16.

Her school principal, June Rose, says: ‘She had a very nice, sensible and theatrical family. It certainly wasn’t a question of abject poverty. Like most actors, it wasn’t Cadillacs and stretch limos, but I don’t believe she ever wanted for anything.’

Kate has said that her fees were paid for by the Actors’ Charitable Trust, and has explained that she had to leave after her GCSEs because her parents could not afford the tuition.

So what are the facts about her background?

Her mother, Sally, was one of seven children born to Oliver Bridges, real name Archibald Ottewill Bridges, and his wife Linda. In a 1939 census, Linda is listed as her ‘husband’s private secretary, unpaid domestic duties’. Oliver was a dentist. When he died in 1967 he left behind £6,815 — equivalent to around £120,000 today.

He was a character of such standing that his local paper wrote an obituary. It noted he had formed the Reading Dramatic Society, later becoming president when it merged with the Reading Amateur Dramatic Society. He was also noted as an ‘active member of the Order of Druids belonging to the Royal Berkshire Lodge No 477’.

Oliver also founded SLY, the Society of Local Yokels — a social club which featured local members dressing up as shepherds and the like, and putting on gala evenings.

Kate’s mum, Sally, was among the members, as was Kate’s father, Roger, and uncle Mark Bridges.

Indeed it is Linda — the daughter of a hotel-keeper from Fulham, South-West London, and who went to the famous Italia Conti school as a young woman — who is credited as being the main source of the family’s acting gene. 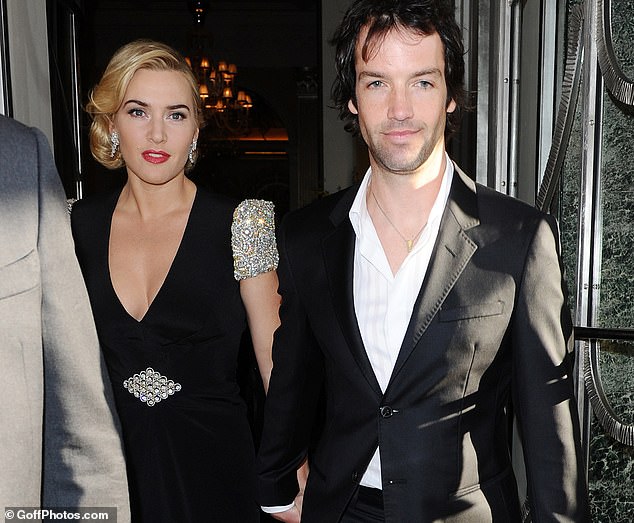 Her son Robert Bridges, Kate’s uncle, was a West End star, appearing in the original production of Oliver!.

Mark Bridges said: ‘She was proud of all her children and her grandchildren. We have all acquired her cookery skills and most of us her great acting ability.’ Kate’s paternal grandfather, Charles Winslet, was working as a shop assistant in a gentleman’s outfitters according to the 1939 census and his wife Blanche was a housewife.

In order to conform to Kate’s impression of poverty and working- class status, then you need to go further back.

Beyond that, her great-great-great grandfather was a dairyman from Richmond, Surrey.

All in all, it’s not a picture of desperate poverty that many working-class families would identify with.

Yet Kate is insistent, saying in the interview that she comes ‘from a long line of impoverished people on both sides of my family’ — adding that this explains why she has ‘tried to instil my parents’ values into my kids’.

‘People never believe me, but my children aren’t over-privileged. We just don’t live like that. They are very balanced. Humble.’

…and her other revelations that have raised eyebrows

ON THE BIRTH OF HER DAUGHTER MIA 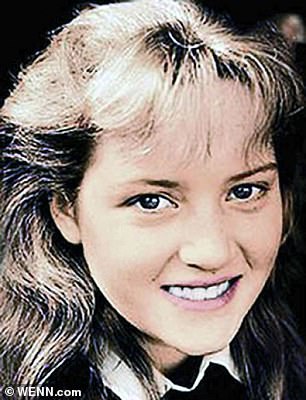 Beginnings: Kate was 16 when she was in her first TV series

When her firstborn Mia arrived in October 2000, Kate released a statement which noted that she was ‘born naturally and without complications’.

Four years later she told a magazine: ‘I’ve never talked about this — I’ve gone to great pains to cover it up. But Mia was an emergency C-section.

‘I just said that I had a natural birth because I was so completely traumatised by the fact that I hadn’t given birth.

She only came out with the truth after having second child Joe naturally. ‘Fourteen hours with no drugs at all, but then I had to have an epidural because I was so tired. It was an incredible birth. Really triumphant.’

ON BEING CALLED ‘FAT’ WHILE AT SCHOOL

Kate has repeatedly said she was fat — and, crucially, teased for it — in her school years. Nicknamed Blubber, she says she was 13st at 15 years old, proclaiming in 2009: ‘I was bullied for being chubby. Where are they now!

‘I suffered from “No one will ever fancy me!” syndrome, well into my teens. Even now I do not consider myself to be some kind of great, sexy beauty. Absolutely not.’

Though Kate has not named the school where the name-calling went on, June Rose, the principal of Kate’s drama school Redroofs, who is now retired, said: ‘I’ve read a lot about her being overweight as a child.

‘But ask any teenager and they’ll tell you they’re fat — they always see themselves differently to everyone else. Kate was a perfectly normal, healthy schoolgirl. She may have had a bit of puppy fat, but nothing abnormal.

‘Children sometimes call each other things, but Kate was never fat.’ Yet it’s not just pupils who Kate accuses of commenting on her weight — which was clearly something she felt self‑conscious about, regardless of how she appeared to others.

In 2016, after winning a Bafta for The Reader, she said: ‘When I was 14, I was told by a drama teacher that I might do OK if I was happy to settle for the fat girl parts.’

Teachers at Redroofs instantly said they never made any such remarks, and her publicist later said: ‘I can now clarify that this did not happen at Redroofs Theatre School. It occurred during an independent drama workshop over a summer in London.’

ON HER PICTURES BEING AIRBRUSHED

She spoke out about airbrushing in 2009, saying: ‘I have wrinkles which are very evident. I will particularly say when I look at movie posters, “You guys have airbrushed my forehead. Please can you change it back?”’ She complained when GQ digitally tampered with a cover image of her to make her more slender and leggy in 2003. ‘I do not look like that, and more importantly, I don’t desire to look like that,’ she said.

Yet in a set of adverts for Lancome, shot by Mario Testino in 2011, she looked as wrinkle-free as a teenager — despite being 35 at the time.

ON BEING BULLIED AND LOCKED IN A CUPBOARD

Kate has said repeatedly she was ‘ostracised’ and ‘bullied’ at school — even being locked in a cupboard once.

She has often recalled bumping into one of the ‘mean girls’ from school who worked on a make-up counter, and thanking her for being such a b***h — because it made her stronger. It is not clear to which school she is referring to in these anecdotes.

June Rose, of Redroofs, said: ‘I read that she was bullied and the other children locked her in a cupboard, but if that did happen, it certainly wasn’t here.

‘The fact she was head girl says all you need to know about her character and how highly she was regarded.’

Another Redroofs teacher, Carolyn Keston, said: ‘We’ve never witnessed or heard of any bullying. Certainly nothing was ever relayed to us.’

Kate, however, insists it did happen.

‘I chose not to bring it to the attention of the whole school at the time; as is often the case in these circumstances, people being bullied can be apprehensive about speaking out.

‘Instead I sought the counsel of one trusted teacher who guided me through this situation in the most kind, discreet and supportive way.’